By William Lloyd: Unbeaten Jeremias Ponce (28-0, 18 KOs) resembled a punching machine in wearing down and stopping Lewis Ritson (21-2, 12 KOs) in a 10th round knockout in an IBF 140-lb title eliminator on Saturday night at the Vertu Motors Arena in Newcastle, England.

In the tenth round, Ponce, 24, dropped Ritson three with body shots. The referee halted the fight after the second knockdown in the round.

It’s unclear whether Ritson went down by a delayed reaction from a right hand from Ponce to the body or if he was forced down by him leaning with his forearm on the back of his head. Either way, Steve Gray had seen enough, calling a halt to the bout at 1:24 of round 10.

It was a strange round in which Ritson’s corner threw in the towel moments after getting back up from a knockdown. Interestingly, the referee decided to let the fight continue, throwing the towel out of the ring.

However, Argentinian Ponce continued to unload on the tired and hurt Ritson with body and headshots. After a second knockdown in the round, Ritson gave it his all, throwing back at Ponce with some nice shots, but it wasn’t to be. Ritson went down again in a delayed reaction from a body shot, resulting in the contest being stopped by the referee.

Ritson was never really in the fight from the earliest moments of the action, as he could not match the high work rate of the taller fighter.

In the second round, Ponce hurt Ritson with a body shot. He then teed off on him with body and punches to the head for the remainder of the round.

It was a surprise that Ritson was able to stay on his feet through it all because he was getting worked over, particularly to the body. Ritson was leaning forward, allowing Ponce to repeatedly hit him with chopping right hands to the back of his head.

Throughout the fight, Ritson did the same thing with him leaning forward and making it easy for Ponce to tag him with punches to the back of his head.

With the victory, Ponce is now the IBF mandatory to IBF light welterweight champion Josh Taylor. However, it’s unclear whether Taylor (18-0, 13 KOs) will stick around the 140-lb division to defend his title against Ponce or move up to 147 after he defends against Jack Catterall possibly Teofimo Lopez.

As for Ritson, he will need to go back to the drawing board and figure out how to come back from this. Of course, it would help if Ritson doesn’t lean forward as much in his future fights. 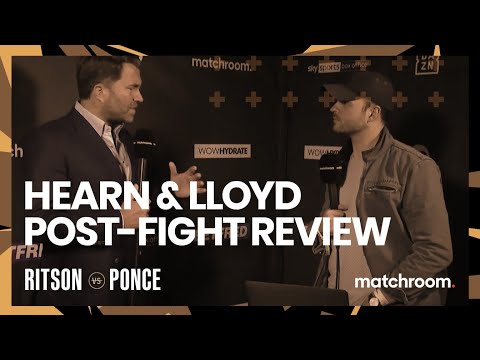