Tim Tszyu vs. Michael Zerafa on July 7th in Australia

By Allan Fox: #1 WBO junior middleweight contender Tim Tszyu (18-0, 14 KOs) on a domestic level opponent in Michael ‘Pretty Boy’ Zerafa (28-4, 17 KOs) in a 10 round fight on July 7th. The Tszyu vs. Zerafa fight was announced on Thursday in Australia.  The fight will be taking place at the Newcastle Entertainment Centre, Newcastle.

Tszyu’s punching might prove too much for Zerafa, who was blown out years ago by Peter Quillin. Zerafa is a dangerous puncher as well, and he may have some surprises for Tszyu if he’s able to stay in there long enough to land his shots.

This fight is arguably a step down for the 26-year-old Tszyu from his last fight against Dennis Hogan on March 31st. Tszyu should have way too much for Zerafa to deal with, but it’s a nice little payday for him.

These domestic-level fights pay well, but Tszyu can’t afford to invest too much time in taking them if he wants to the elite contenders. Boxing fans want to see Tszyu take on the winner of the undisputed 154-lb championship between Jermell Charlo and Brian Castano.

It’s unclear whether Zerafa will prepare Tszyu for what he’ll be facing when he takes on the Charlo vs. Castano winner. 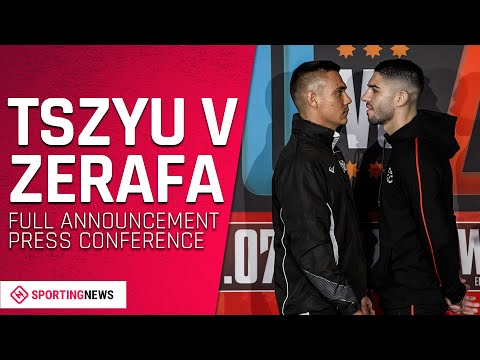 If anything, it might hurt Tszyu’s game to be fighting a second-tier fighter like Zerafa rather than one of the top 154-lb contenders.

“The talk stops,” Zerafa said. “Everyone is expecting fireworks with me. He can call me whatever he wants.

“When I was fighting world-class opponents, he was drinking warm milk before bed so it doesn’t matter to me. You’ve never fought outside your backyard,” said Zerafa in pointing out that Tszyu has fought mostly in Australia.

Tszyu has impressed with his development lately with wins over Hogan, Bowyn Morgan, Jeff Horn, Jack Brubaker, and Dwight Ritchie.

Tszyu vs. Zerafa is one of those grudge matches that mean something to Australians, but it doesn’t register elsewhere.

Jeff Horn recently beat the 29-year-old Zerafa by a 10 round majority decision in December 2019, which shows what we’re dealing with.

In the first fight between them, Zerafa surprised boxing fans by a ninth-round knockout in August 2019. Given that Tszyu recently beat Horn, it makes a fight against Zerafa irrelevant.

NEWS:   Tim Tszyu says Tony Harrison will be in for a "Shock" on March 12th

Tszyu might as well fight Horn again rather than facing the guy that he recently beat in Zerafa. Oh well, the fight will pay and I guess that’s all that matters.

By far, the win over Horn was the biggest win of Zerafa’s ten-year professional career. Unfortunately, Zerafa’s 15 minutes of fame ended in his next fight in losing to Horn by a 10 round decision in the rematch.

Recently, Zerafa blew out 45-year-old Anthony Mundine by a first-round knockout last March. However, this wasn’t the prime version of Mundine eighteen years ago in the early 2000s.

Hopefully, Tszyu doesn’t wind up fighting mostly in Australia for the whole of his career rather than taking on the best fighters in the world.

There are some good fighters in Australia, but for Tszyu to become a world champion, he’s going to need to travel elsewhere to take on the belt-holders.

Provided that Tszyu takes care of Zerafa without any problems, these would be some good options for his next fight if he doesn’t challenge for the titles against the Charlo vs. Castano winner:

When you see all the super talented fighters that are available to fight at 154, it makes you shake your head in wondering why Tszyu chose to fight Zerafa.

If Tszyu is going to be fighting for a world title soon, he needs a step-up opponent to get him ready for Charlo or Castano. You can’t say that Zerafa is any kind of preparation for Tszyu.

Zerafa would prepare Tszyu to fight a lower-level opponent rather than a world champion. That’s why it’s a good idea for Tszyu to stop fighting domestic-level opposition so that he can compete against the higher-level contenders.