By Jim Maltzman: Mikey Garcia prefers that undisputed lightweight champion Josh Taylor stay at 140 and defend his four titles against superstar Teofimo Lopez before considering making a move up to 147 to challenge Terence Crawford for his WBO title.

Taylor vs. Teofimo would be a HUGE fight for the sport, and much bigger than last Saturday’s Taylor-Jose Ramirez undisputed clash. Taylor won that fight by an impressive 12 round unanimous decision.

Last week, Top Rank promoter Bob Arum said he wanted Teofimo to stay at 135 for two more fights, one of which is against WBC champion Devin Haney.

The former four-division world champion Mikey isn’t sure if Taylor (18-0, 13 KOs) can beat Crawford (37-0, 28 KOs) straight away in his first fight at welterweight.

Taylor needs to get his feet wet at 147 before looking to take on the #1 fighter in the division.

With Crawford’s promotional contract with Top Rank expiring in October, it’s important for them to make the Crawford-Taylor fight as soon as possible.

It might not be in Taylor’s best interest, but you can certainly say it helps Top Rank’s bottom line if the Crawford-Taylor fight happens while they’re both signed with them.

Taylor would be better off working his way into by taking three or four top 147-pounders first before challenging Crawford or his WBO title.

“I don’t know if he can beat Terence Crawford. Crawford is the real deal also,” said Mikey Garcia to Fighthype when asked if Josh Taylor can beat Crawford.

“He’s a very talented, smart fighter, tricky. I don’t know if he [Josh Taylor] can beat him, but he’s the undisputed world champ,” said Mikey.

It’s not fair to Taylor to fight Crawford in his first fight at 147 without getting experience in the weight class first.

These would be excellent options for Taylor to fight to get acclimated to the welterweight division:

“You can’t take anything away from him. I think a better match-up would be if Teofimo was to move up to 140.

“That might be something we see before [Taylor moves up to 147 to take on Crawford]. Both [Teofimo and Taylor] are both undefeated champions in their weight classes, so it’s a toss-up,” said Mikey when asked who he would pick to win the fight between Josh and Lopez.

“Hell, yeah,” said Mikey when asked if he’d like to fight Josh Taylor. “I’d take that fight, but you get into the politics of business, and sometimes that prevents from happening,” said Mikey in expressing doubt whether Taylor’s promoters at Top Rank would be agreeable to letting him take the fight.

“You just got to roll with it and see what you can make out of it, and that’s it,” said Mikey. 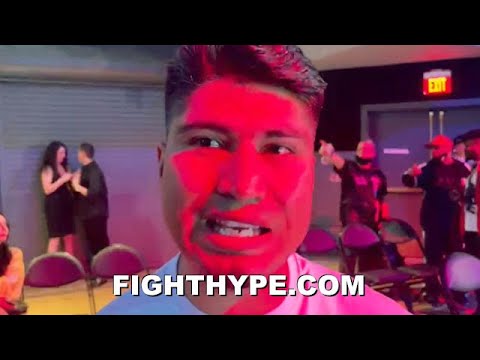 Fury vs. Wilder 3: Deontay can win this fight on July 24th »