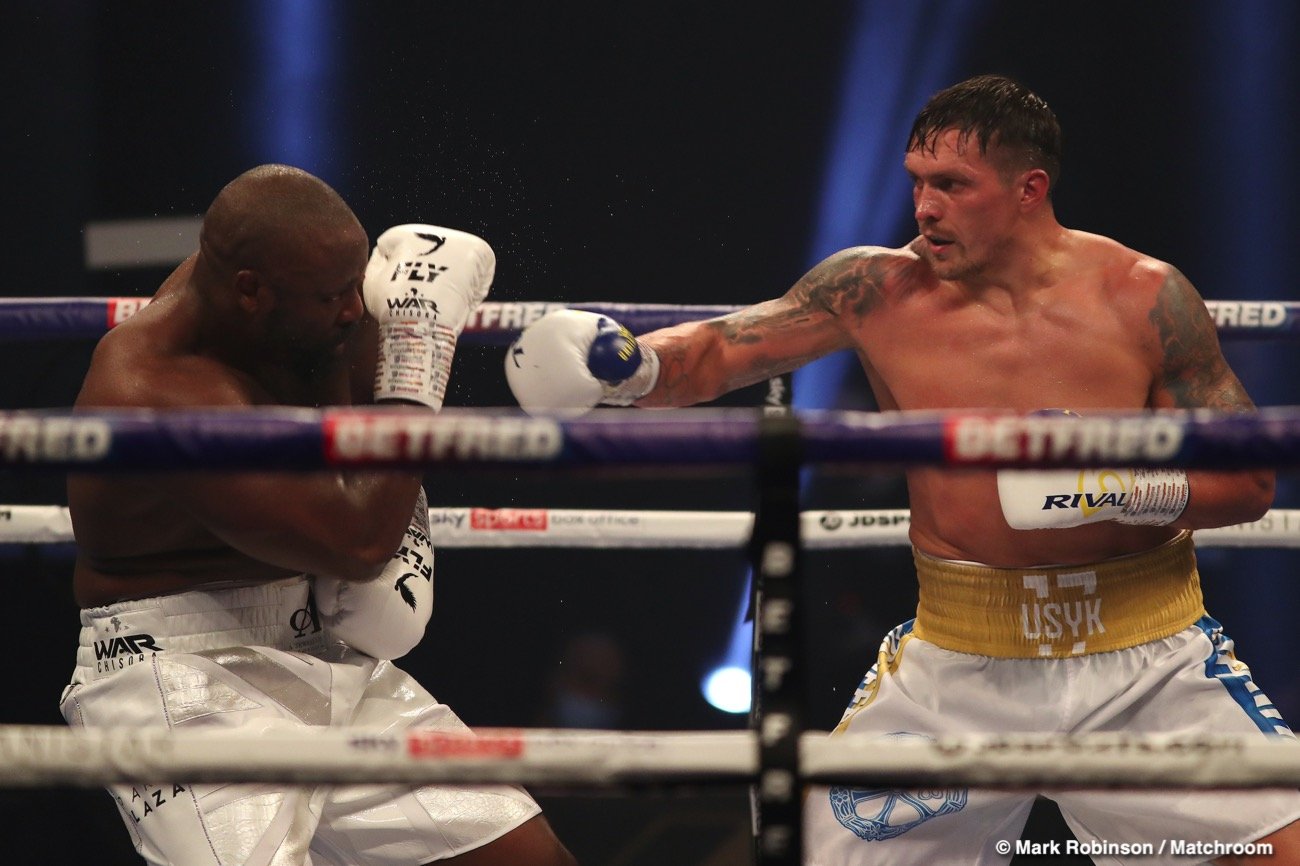 By William Lloyd: Eddie Hearn reports that Anthony Joshua wants to have Oleksandr Usyk’s name on his resume, and they’re going to stick with him as his next fight as long as they can negotiate it.

Promoter Hearn recently toyed with the idea of Joshua (24-1, 22 KOs) vacating his WBO heavyweight title due to him not being happy with him being ordered to face mandatory challenger Usyk.

Hearn believed several other fighters would bring more interest from fans, such as Andy Ruiz Jr, Dillian Whyte, and Luis Ortiz. Hearn is now saying that Joshua will stick with defending his WBO title against the former undisputed cruiserweight champion Usyk (18-0, 13 KOs).

From Joshua and Hearn’s perspective, it’s a big letdown to go from being on the brink of fighting WBC champion Tyson Fury in the biggest fight in boxing to defending against WBO mandatory Usyk, who has no real fan base to speak of in the UK and U.S.

You can argue that Usyk isn’t anywhere near as popular as Whyte or Ruiz, and those are two fighters Joshua could choose to fight if he weren’t encumbered by his WBO mandatory commitments to defending against Usyk.

Usyk is an incredible name for Joshua’s resume

“Over time, he realizes he doesn’t want to vacate a belt,” Hearn said of Joshua. “I think he’s a throwback fighter, and he wants to take on all comers. Part of him thinks beating Oleksandr Usyk is an incredible name on his resume.

“That’s a pretty good run,” said Hearn about Joshua’s list of fine names on his resume. “There’s no gimmes on it. I feel like as long as the deal runs smoothly [for the Joshua vs. Usyk fight], and no one tries to be clever, then I think that fight is quite automatic.

Usyk would be an incredible name for Joshua’s resume if this fight were held at cruiserweight. Usyk is still unproven at heavyweight, and he had a lot of problems in his last fight against journeyman Derek Chisora.

For Usyk to be seen as a credible name for Joshua’s resume, he needs a fan base and quality wins on his resume. Unfortunately, Usyk doesn’t have either of those things going for him.

At cruiserweight, Usyk didn’t look spectacular in his fights with Tony Bellew and Mairis Briedis. Usyk didn’t dominate either of those two guys.

Also, Usyk’s win over Artur Beterbiev in the 2012 Olympics was controversial, as many boxing fans had him losing that fight. Beterbiev stunned Usyk in that fight and had him on the run.

With a different set of judges, Beterbiev likely would have won that fight. Beterbiev clearly landed the more meaningful punches.