Devin Haney: ‘What belt does Gervonta Davis have?’

By Jim Maltzman: Devin Haney seems a little cool to the idea of facing WBA ‘regular’ lightweight champion Gervonta ‘Tank’ Davis in a unification fight on his next date.

Haney, 22, doesn’t recognize Tank as a champion at 135 because he holds the secondary WBA title, not the upper-level strap held by Teofimo Lopez.

Haney (26-0, 15 KOs) successfully defended his WBA 135-lb title last Saturday night against Jorge Linares (47-6, 29 KO). With that fight out of the way, Haney wants a unification fight for his next performance, and he wants Teofimo Lopez.

The unbeaten Tank Davis (24-0, 23 KOs) would be just as big a fight as Teofimo. Haney wants to win three titles at once by fighting IBF/WBA/WBC Franchise/WBO champion Teofimo (16-0, 12 KOs).

“What belt does he have?” said Haney when asked at the post-fight news conference if he’d be interested in fighting WBA ‘regular’ lightweight champion Tank Davis. “You said he has a belt.”

“The great thing about the situation is there are no network problems,” said Eddie Hearn about putting a fight together between Gervonta Davis and Haney.

“That’s generally an excuse as to why a fight can’t get made. So there are no excuses. So if Al Haymon wants to make an offer to us, Bill, and Devin to fight Tank on pay-per-view, no problem.

“It’s a massive pay-per-view fight if someone wants an offer from us, a sizable offer to do it on DAZN.

“I think he’s [Haney] is in such a great position because there really are no excuses as to why one of those fights shouldn’t happen.

“That’s why I talked earlier about you guys a huge pass because where’s the excuse for that one? It’s the same network, mandatory challenger, and it was like, ‘that’s not going to happen.’ Why not?

“I think people need to be more accountable for why those types of fights don’t happen. Now, Tank, Teo, there’s no excuse [for them not to fight Haney],” said Hearn.

Haney would receive a lot of respect from the fans if he were to beat Tank Davis. Despite Tank not having the #1 belt with the World Boxing Association, the fans would give Haney a ton of credit if he beat him.

Devin says Teofimo is his #1 choice

“All those guys are good,” said Haney when asked who is the best one for him to fight at 135. “I can’t sit here and lie to the media and the fans by saying all those guys aren’t good.

“Honestly, I think all of them would be a huge fight. I really want belts right now. I want to become the undisputed lightweight champion of the world. The one that I want the most is Teo,” said Haney.

Teofimo has a fight against George Kambosos Jr on June 19th, and he should be available after that. Haney will need to be at his best to beat Teofimo because he’s an exceptional fighter. 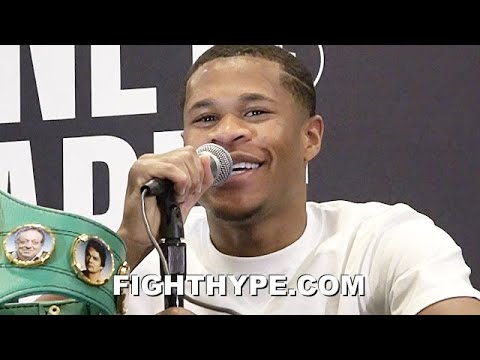 Manny Pacquiao could be reinstated as WBA 147-lb champion »