By Allan Fox: Chris ‘The Nightmare’ Arreola was livid after losing to former heavyweight champion Andy Ruiz Jr by a set of three lopsided scores from the judges last Saturday night at the Dignity Health Sports Park in Carson, California.

Arreola (38-7-1, 33 KOs) openly admitted that he deserved to lose the fight, but he had a problem with two of the judges giving him only one round and the other only two rounds.

You can argue that Arreola deserved to win rounds 2, 3, and 4, but the rest of the other rounds seemed clear for Ruiz.

With the way the judges were scoring the fight, Arreola had no chance for victory other than knockout. He was the B-side in the fight, which means a lot in boxing.

At the post-fight news conference, Arreola said he feels that the judges need to wear headphones that prevent them from being swayed by the cheering from the crowd.

Arreola maintains that many of the punches that Ruiz was throwing were hitting him on the glove, but the cheering from the pro-Ruiz crowd may have given the judges the impression that he was landing.

Arreola goes off on the judges

“There were a lot of punches he was hitting my gloves,” said Arreola at the post-fight news conference in expressing his unhappiness with the scoring.

“He never hurt me or put me in danger, not once. It’s really rejecting when I don’t get any respect from the judges when I’ve been putting so much f**** time, and these f**** rape me and don’t even kiss me.

The only thing you can say about the judges is that they unanimously picked the winner of the fight correctly. Ruiz definitely was the better fighter last Saturday night of the two, but he clearly didn’t deserve to win by 11 rounds to 1. That was absurd scoring, but it’s typical in the sport.

There was no way that Arreola could win the fight with the way the judges were scoring the fight, which is too bad because the outcome was marred due to the lopsided scores.

You got to give Arreola credit for admitting that Ruiz won the fight because many fighters would have gone overboard and claimed robbery.

It looks bad when boxers go overboard in complaining after fights where it was clear that they lost.

Chris wants the judges to be held accountable

“I honestly believe that judges should wear headphones, so they’re not swayed by the crowd because they’re all cheering, and they’re [Ruiz’s shots] are hitting me on my f*** gloves,” said Arreola.

“Maybe he did beat me, but he didn’t beat me the way the judges made it seem. I feel like these judges need to be held accountable.

“They need to have accountability and why they score like that. How are you going to give me just one round? A lot of the punches he was hitting me with hit the gloves,” said Arreola.

It’s got to be a disappointment for Arreola to lose by such a wide margin, but there’s nothing that can be done about it. This is always how it is, unfortunately.

Sometimes the judges get it right by scoring the fights the way the fans see it, but more often than not, you get these kinds of fights where the judges see it totally different from how the fans view the match.

A rematch is highly unlikely

To his credit, Ruiz, 31, said he would be willing to give Arreola a rematch, but that’s him speaking, obviously. It’s improbable that Ruiz’s promoters will give him the green light to fight Arreola a second time because the money and the fan interest won’t be there.

With Ruiz’s fights now being sold on FOX Sports PBC  pay-per-view, he must face fighters that will bring in the PPV buys. His promoters will likely tell Ruiz that a second fight with Arreola won’t sell, so there can’t be a rematch.

Ruiz’s next fight on FOX Sports PPV will likely be one of these guys:

It’s not realistic that Ruiz will fight Luis Ortiz, though, because he’s got the boxing skills to beat him.

Arreola was afraid to finish Ruiz in the second

“I’m dejected. These a** hole judges see something different,” continued Arreola. “ow do you guys see that? I don’t get it? I didn’t come out with a black eye, and my nose wasn’t busted.

“I absolutely hurt him [in the second], but Andy is a very dangerous fighter. We saw that against AJ, and I didn’t want to get caught with a sucker punch. 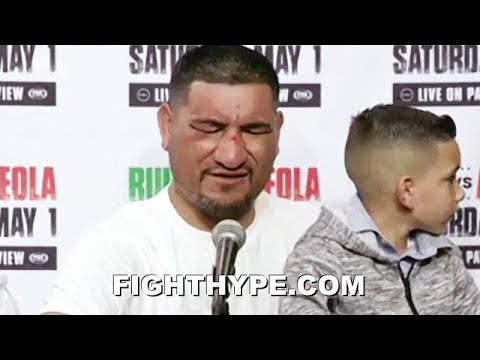 “I wanted to make sure that I measured him and caught him right. That right hand caught him flush on the chin, and it put him down.

“He didn’t put me down. You can watch the fight again, and he probably hit me two good times. I hit him countless times with my right hand.

“My jab was snapping his head back. He may have speed, he may have power, but he didn’t hurt me. This is boxing; it’s a dangerous sport.

“I wasn’t going to be like AJ and throw caution to the wind,” said Arreola in answering why he didn’t go all out for the knockout after dropping Ruiz in round two. He’s always a dangerous fighter,” said Arreola.

It was clearly a mistake on Arreola’s part not to for the knockout when he had Ruiz hurt in the second and third rounds because that was his golden opportunity to win the fight.

Arreola should have known what he was up against as the B-side fighter going against a pay-per-view guy like Ruiz from the Canelo camp. It’s a no-brainer when fighting a PPV fighter; you’ve got to try and finish them.

Ruiz and Arreola are on different sides of the spectrum regarding how much time left they have with their careers and what they bring to the table in terms of money for the sport.

When you’re going up against a money-fighter, you got to do more if you want to make it close on the scorecards, and Arreola was way too conservative for his own good.

In hindsight, Arreola only has himself to blame for being too careful. He had a chance to win the fight, but he played it safe and let it go to the scorecard.

There’s a lot of hype behind Ruiz after his victory over heavyweight champion Anthony Joshua in 2019. Many fans believe that Andy can recapture his IBF, WBA, and WBO titles now that he’s lost weight.

Beating a hyped fighter like Ruiz by a decision will be very difficult for anyone, particularly an older heavyweight on the verge of retirement.