Alvarez not worried about Billy Joe’s drama, expects him to be there Saturday

By Allan Fox: Canelo Alvarez is tired of all the excuses Billy Joe Saunders has dreamed up in the weeks before this Saturday’s clash. WBO super middleweight champion Saunders (30-0, 14 KOs) is still iffy for Saturday’s fight with Canelo, 30, at the AT&T Stadium in Arlington, Texas.

Saunders wants Canelo to allow him to fight in a giant 22-foot ring so that he can move all night long against him, but the Mexican star is staying firm. He’s only willing to fight Saunders in a 20-footer, and he won’t give him to let him fight in a huge ring.

Canelo (55-1-2, 37 KOs) is tired of Billy Joe’s incessant grumbling about this and that. He wants to get this fight over with so he can move on to his important unification match against IBF super middleweight champion Caleb Plant next September.

It’s widely believed that Saunders wants to run all night, so he’s willing to push as hard as he can to get the 22-foot ring. In a 20-footer, Canelo will still be able to catch Saunders frequently and hurt him.

But it’ll be harder for Canelo to do that in a 22 or the 24-footer that Saunders originally wanted.

The ring size wasn’t written in the contract, so Saunders doesn’t have a leg to stand on to force Alvarez to give in to his wish for a 22-footer.

Canelo: Saunders has had a lot of excuses

“I don’t care about the size of the ring; I’m just going to go in there and do my job,” said Canelo during Tuesday’s meeting with the media about his fight with Saunders.

“It’s not the only excuse he’s [Billy Joe] had; he’s had plenty of excuses,” Canelo continued. “He has to fight Saturday. The fight’s going to happen; that’s not a problem.”

Saunders has played the victim since the fight was made, believing ahead of time that he wouldn’t get a fair deal.

He’s assuming that because Erislandy Lara, Gennady Golovkin, and Austin Trout had a controversial scoring in their fights with Canelo, it means it’ll happen to him too.

“I give Billy Joe a really good chance for the reason being if you think about Canelo Alvarez, the two toughest fights he had in his career were Floyd Mayweather Jr, who is a pure boxer, and a southpaw by the name Erislndy Lara, who is a boxer,” said Roy Jones Jr to iFL TV when asked if Saunders has a chance against Canelo.

“So if you think about those two guys, who is Billy Joe closely related to in a boxing ring? Those two guys. He’s [Saunders] a boxer, and he’s a southpaw, and he can punch, but he thinks boxer first much like Tyson Fury.

“So when you got a guy like that, the only problem that Billy Joe is going to have is can he last long enough early to get to those later rounds without sustaining any injuries and cuts, head-butts anything, because he’s been off for 15 months if not longer.

And so they’re [Team Canelo] catching him at a bad time for him, but that’s usually how they do you when you’re not the A-side guy. So they’re catching Billy Joe at the worst time,” said Roy.

If this fight took place in 2014, Saunders would have had a good chance of either beating Canelo or making it close with his mobility.

But Canelo has had years to learn how to deal with movers, and he won’t be confused when he gets in there with Billy Joe.

“So now Billy Joe has to make some adjustments and make up for that ring rust before he gets in there because if he can get in the fight right away, he has a very good chance of winning,” Jones continued.

“If he doesn’t get into the fight right away, he’ll get blown away. He’s a very smart guy, and he’s a boxer and a smart boxer. With that being said, he should have a chance.

“And if you’re not going to fight the best, why be in the sport. And Canelo is going to test his chin too. I heard he’s been hurt quite a few times.

“I haven’t seen it, but I’ve heard that Billy Joe has been hurt a couple of times. He also will need to be able to take Canelo’s punch because Canelo is a really good puncher.

“So if he [Saunders] can take a punch, he should make it a really interesting fight because with Canelo being the counter puncher he is, the only people that would give him real problems are the other guys that are slick boxers and counter punchers,” said Roy Jones Jr.

If Billy Joe starts slowly, he’ll fall quickly behind in the fight, and he won’t have a chance of winning a decision. That’s Saunders’ only way of winning the fight. 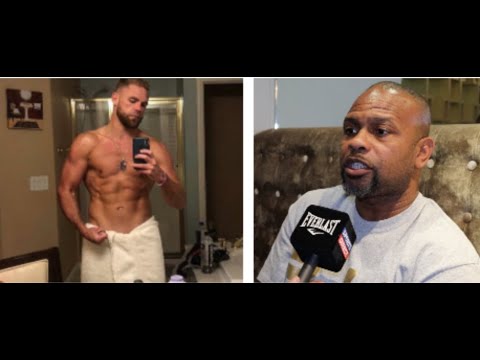 
« Luis Nery & Brandon Figueroa Square Off on May 15th