Kambosos: “Lopez has a suspect chin, don’t surprised if he goes down in three rounds”

George Kambosos Jr has warned Teofimo Lopez he sees several flaws he will look to expose when the pair meet and believes victory will secure his legacy as the greatest Australian fighter of all time. 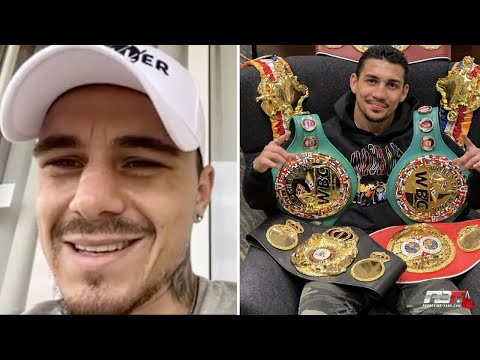 The 23-year-old dethroned Vasiliy Lomachenko in October to become undisputed champion and his father and trainer Teofimo Lopez Sr said in a recent interview with FightHype.com that he doesn’t see the fight lasting longer than three rounds.

However, Kambosos Jr believes he has the power to secure an early stoppage himself, but is willing to win the fight by any means possible.

“Lopez is going to find out the hard way, they think they’re coming up against one style but I’ve got many styles I adapt, I’m a true champion, I adapt.

“I can’t wait for this fight, I see many holes in this kid’s game and we know what we’ve got to do.

“I’m coming up with a fantastic gameplan with my team. I’ve been putting in work, I’m hitting harder than ever, I’m faster than ever and [I’m going to get the] victory by any means.

“I know this kid’s got a suspect chin. If I can crack him with one shot, the speed and power that I possess and the explosive shots that I pop off, don’t be surprised if he goes down in three [rounds].

“But I’m fully prepared for whatever way this fight goes, we’ve seen in many of my fights that I love the 12 rounds.”

The 27-year-old became IBF mandatory challenger with a split decision win over Lee Selby in London in October.

‘Ferocious’ extended his undefeated streak to 19 consecutive victories and insists defeating Lopez will seal his place as Australia’s best ever fighter.

“We’ve had some great champions in our past,” the Sydney man added.

“But I go down as the greatest ever when I win this fight, but my vision is just becoming the undisputed champion.

“Whatever else comes with it, the greatest in Australia, the pound-for-pound number one Lightweight after this in the world.

“That’s all to come, I’m just focused on one job that’s me and Lopez in that ring.

“I’ve been an underdog my whole career, I love it, I thrive off it.

“I’ve been an underdog many times and I’ve prevailed and I’ve come through, so if he thinks this is a speed bump well guess what, all his tyres just got popped, he’s got no tyres to move forward on.

“This could be the worst speed bump of your life.”

Thurman tells Spence: ‘I’m better than anyone you ever fought, let’s fight’ »