By Jim Maltzman: Joe Smith Jr weighed in at 174.8 lbs on Friday for his 12 round fight for the vacant WBO light heavyweight title on Saturday night against Maxim Vlasov on ESPN at the Osage Casino in Tulsa, Oklahoma. Vlasov (45-3, 26 KOs) weighed in at 175 lbs.(Photo Credit: Mikey Williams (Top Rank via Getty Images) 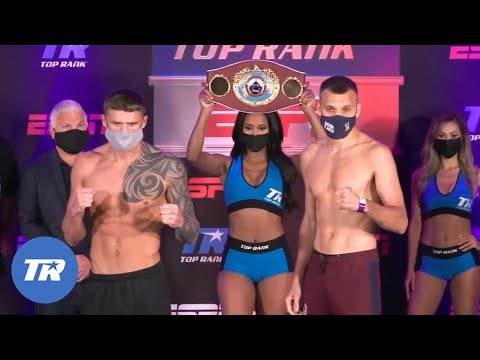 The power and youth are definitely on the side of the 31-year-old Smith, but it’s still far from a sure thing win for him.

Despite having the power advantage in Smith’s fight two years ago against Dimitry Bivol, he lost to the Russian fighter by a one-sided 12 round unanimous decision in March 2019.

Like Bivol, Vlasov has a lot of boxing skills, and he’s more than capable of beating Smith if he can avoid his huge bombs that he’s going to be throwing all night.

The Smith vs. Vlasov fight winner will be the new WBO 175-lb champion and will fight IBF/WBC champion Artur Beterbiev next.

“I saw my career going up. I knew I was going to blow up after putting on a show like that and I was looking forward to seeing what happened next,” said Joe Smith Jr to Max on Boxing in remembering his win over Bernard Hopkins.

“I got a little more experience after fighting him, and I learned that I need to work on my footwork a little bit more,” said Joe Smith Jr in talking about his loss to Dimitry Bivol.

“I learned that I need to let my hands go more and throw more combinations and stay a little more busy rather than looking for one punch.

“I was just looking to land one big shot rather than seeing something up,” said Smith about him loading up too much against Bivol.

We won’t know for certain whether Smith has learned from his loss to Bivol until he shows it inside the ring on Saturday night.

In Smith’s two fights since he’s looked like the same fighter as always in beating Eleider Alvarez and Jesse Hart in wars.

There’s been no real change to Smith’s style of fighting, as he’s still looking for one big shot at a time and not putting his punches together in the way he needs to for him to beat guys like Bivol and Artur Beterbiev.

On Saturday, Smith will have to put his punches together for him to beat Vlasov because that guy is a combination puncher that never stops coming.

Smith agrees with Vlasov’s label of him

“I guess you can say that, but simple is good sometimes,” said Smith in reacting to Vlasov saying that he’s a “simple fighter.”

“I believe I’m an all-around good fighter. I believe I can box, I can punch, and I believe I’ve been showing that in my last couple of performances. So he’s going to be in for a surprise.

“I’m very motivated to get in there this weekend and put on a great show because I know there’s a lot on the line, and I know there are going to be a lot of great opportunities to come from the victory tomorrow.

“It’s a big change, but I believe that I deserve it and it’s motivation to continue to look better and better each time I go in there so that it stays that way,” said Smith Jr about being the favorite to beat Vlasov.

“It’s just another thing for me to prove people wrong and shock the world again by possibly stopping a guy that they think is a monster in there,” said Smith when asked about his thoughts on possibly fighting Artur Beterbiev next.

Smith will never be a complicated ring technician like Bivol because that’s not his style.

What got Smith this far is his punching power, and if he were to deviate from that to try and remake his game, he may fall apart and start losing.

It’s fair to say that Vlasov is bothered by big punchers, who go after him the way Glowacki did.

You can expect Smith to attack Vlasov in the same way that Glowacki did, and it’ll be interesting to see if he’ll be able to stand up to his power.

“It’s been pretty horrible,” said Smith about having to deal with delays to fight Vlasov because of the pandemic. 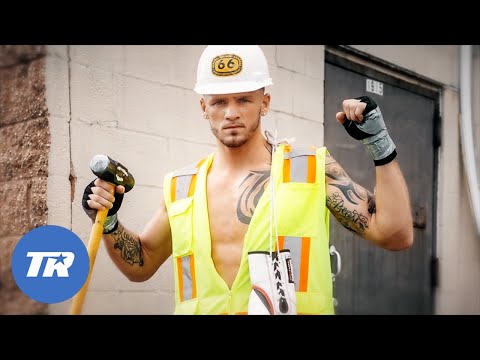 “When I made it to the fight the first time and I was just about to make weight and then to be told the fight was off, that was hurtful.

“That was really hurtful at the time because I had a lot going on and I had a lot planned,” said Smith.

“I had just gotten married, so my wedding was the following weekend. It was a lot going on at the time. Finally being here and being that close to getting that belt.

“I know it’s a tough thing to do, but I’ve just got to stay focused, relaxed and calm because there’s a lot on the line, and there’s a lot of good things to come from this,” said Smith.

It’s going to be important for Joe Smith to stay focused the entire 12 round fight against Vlasov because he could quickly fall behind early.

Smith doesn’t need to be playing catch-up against a boxer like Vlasov, given that he’s not equipped with the type of boxing skills to play catch-up.

Beterbiev could be next for Smith

“I don’t look past Vlasov, I know he’s going to be a tough opponent, but there’s so much on the line, and so much to look forward to, a world title and bigger fights, I just got to stay positive and mentally ready,” said Smith.

“I want to stay busy and I also want to fight the big fights, so if he’s ready to fight, I’ll be ready to go,” said Smith Jr about Beterbiev.

“I’m just out here to fight the best, that’s what I came here to do. I want to be the best in the division,” said Joe Smith.

If Joe has any reservations about whether he should take the unification fight with Beterbiev, he needs to let Top Rank know about it soon.

Top Rank promoter Bob Arum wants to make the fight between Smith Jr and Beterbeiv if he’s victorious on Saturday night against Vlasov.

Joe Smith Jr. vs. Maxim Vlasov – Where to watch?

Saturday’s battle between Joe Smith Jr. and Maxim Vlasov can be seen on ESPN, ESPN Desports, and ESPN+.