It looked like for a moment that would be some fists flying when the 42-year-old Cormier started pointing his fingers in Jake’s face.

It’s a good thing that no punches were thrown because this is too big of a potential fight for it to occur outside of the ring.

Jake told ESPN that he’s 100% down for a fight with the retired former UFC champion Cormier, but he doesn’t think he’ll sign the contract. It’s one thing for Cormier to talk, but he may lose his pen when it comes to signing a contract to fight Jake.

Paul, 24, thinks that Cormier won’t want any of this smoke, especially after what happened to his fellow UFC fighter Ben Askren on April 17th.

Jake sent Askren packing in a hurry after poleaxing him with a vicious right to the head in their fight on Triller pay-per-view at the Mercedes-Benz Stadium in Atlanta.

It was a good thing for Askren, 36 that the referee stopped the fight when he got back to his feet because he could have gotten hurt.

Cormier wants Jake to be beaten

“Somebody has got to do something about this, Jake Paul,” said Cormier on social media. “I guess he gets to pretend to be a fighter for a little while longer.

“He kept popping Ben [Askren] in the stomach over and over again. He then pulled a nice overhand right, and caught Ben right upside the head, and put him down.

“Now he’s doing push-ups and everything. Come on, man. This is crazy. This has got to be the craziest s*** I’ve seen in my life. This dude right here,” said Cormier.

If Cormier wants the fight with Jake, he needs to step up to the plate and take it while still being offered. Jake isn’t going to wait around forever, waiting for Cormier to get off the pot and decide on taking the fight. 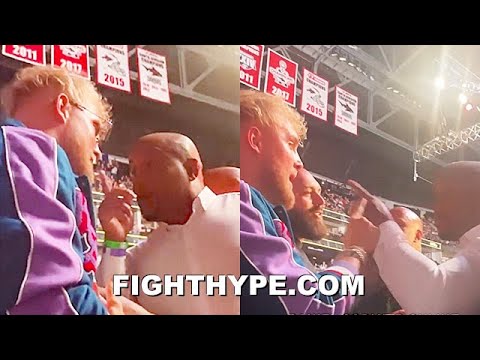 In the news on the Jake Paul front, British light heavyweight domestic-level fighter Tommy Fury (5-0, 4 KOs) is pushing for a fight against him. The 21-year-old Tommy told Talksport that he’d sign a contract to fight Jake if he sends it over.

Tommy says it’s “easy money” and that his own mother would beat Paul. What Tommy Fury isn’t saying is his promoter Frank Warren says he wants a 50-50 split for the fight with Jake to take place. Sadly, the chances of Jake agreeing to a 50-50 split with Fury are nonexistent.

Let’s be real about this. Tommy Fury would be extremely fortunate if he were to be given an 80-20 split for a fight against Jake because he brings nothing to the table.

The only thing Tommy has going for him is his big brother Tyson Fury, who would help publicize a fight between him and Jake Paul. Tyson is popular, but he doesn’t have the reach of some of the highly popular UFC fighters or YouTubers.

The  3 strikes that stand in the way of Tommy Fury getting a fight with Jake Paul:


« Is Gennadiy Golovkin cashing out?

Terence Crawford: Will he fight Josesito Lopez next? »