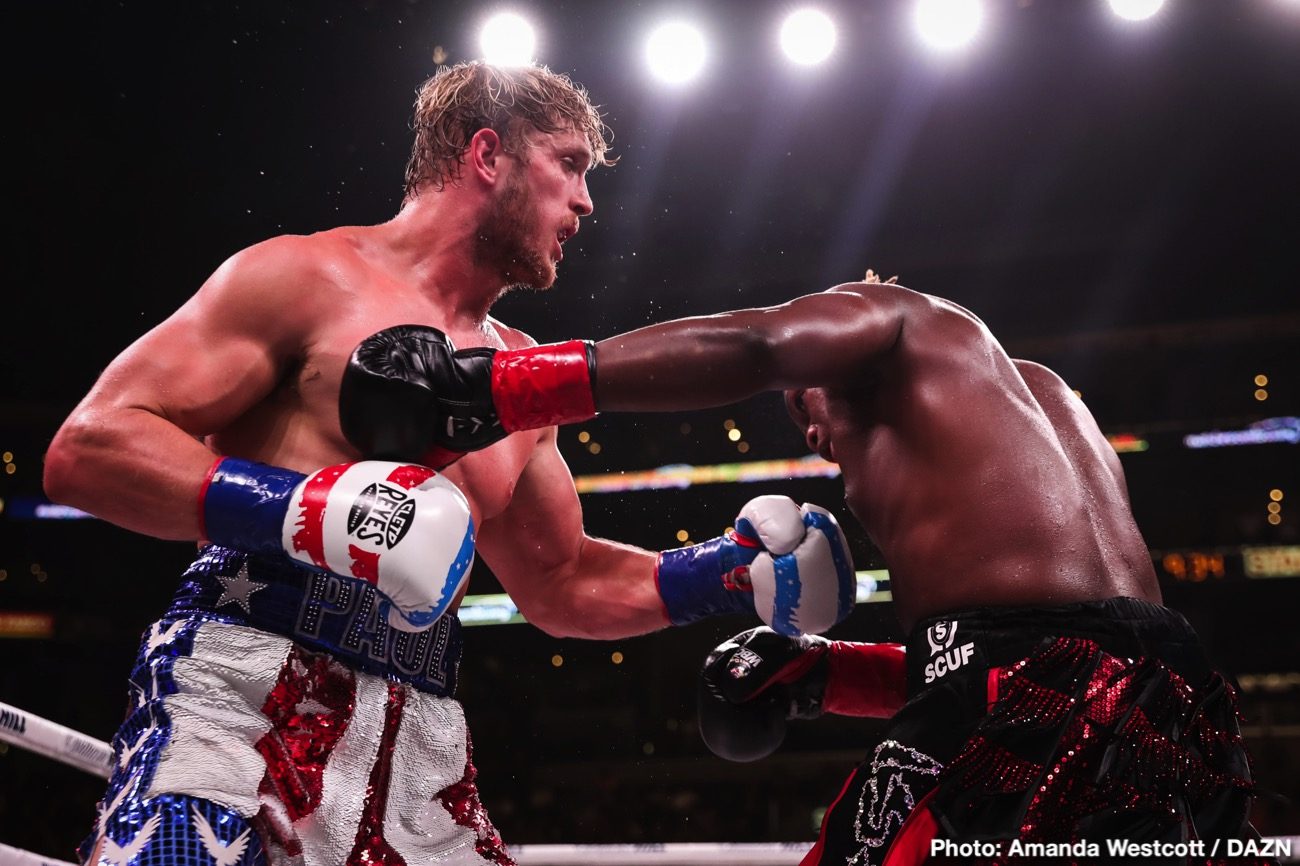 By Jim Maltzman: Boxing superstar Floyd Mayweather Jr and YouTuber sensation Logan Paul are heading for June 5th on Showtime pay-per-view, say sources for The Athletic’s Mike Coppinger. The Mayweather vs. Paul fight had been scheduled to take place on February 20th but was postponed.

Fanmio had been the platform that was going to broadcast the Mayweather-Paul fight, but now Showtime PPV will be showing the contest.

Mayweather revealed earlier this week that the fight will be staged in one of these cities: Atlanta, Dallas, Las Vegas, Los Angeles, or Miami.

As for the particulars, Logan Paul, a cruiserweight, can’t come in over 190 for the fight, and Mayweather is limited to 160 lbs.

For the 26-year-old Logan, it could be difficult for him to trim down to 190, as he weighed in at 199 lbs for his pro debut against YouTuber KSI in November 2019. 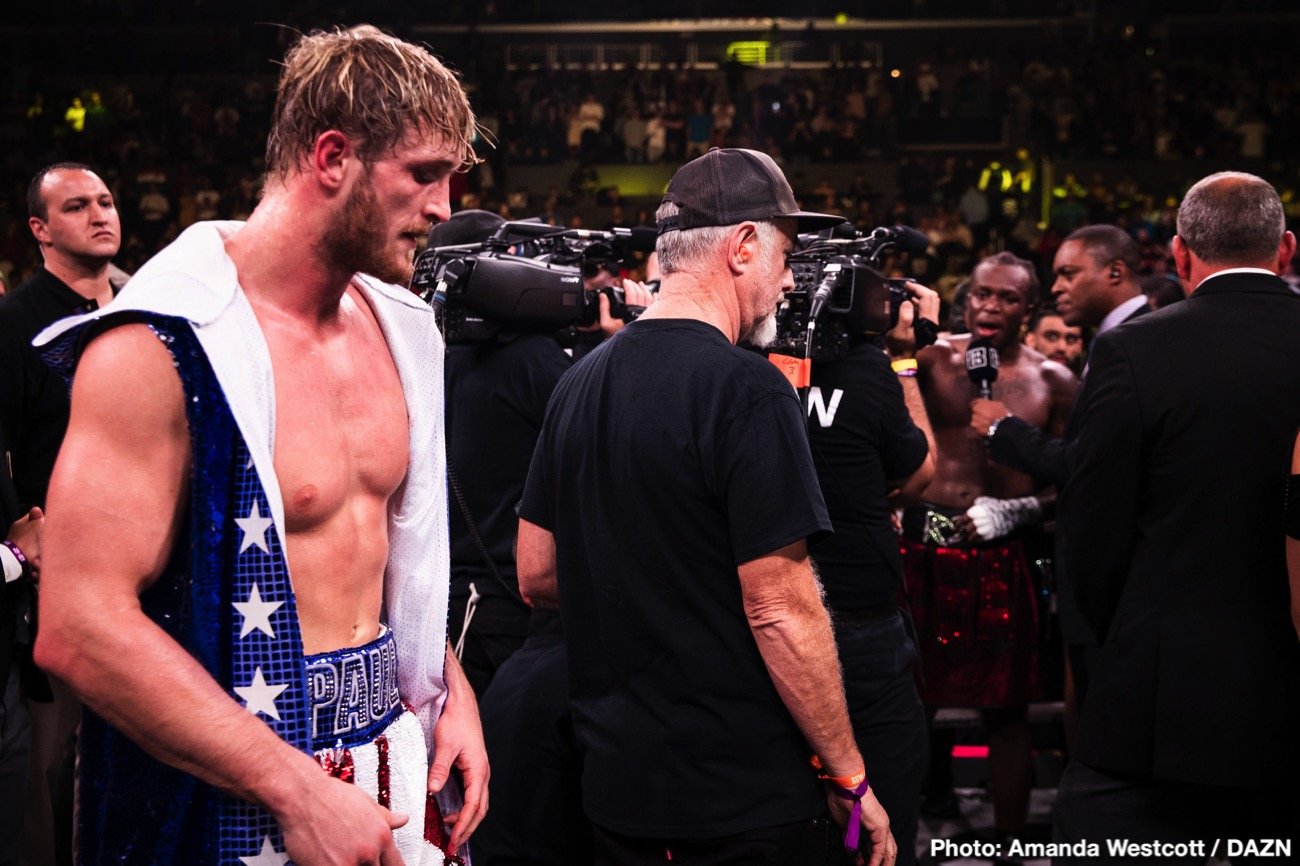 Paul ran out of gas after the first round and lost the fight by a six-round decision. Logan looked exhausted throughout the fight, and KSI, who was unimpressive as well, outworked him, taking advantage of his fatigue.

It wasn’t the greatest fight to watch, but the bar was low given that both guys have never fought a professional bout and had zero background in boxing.

Mayweather-Paul to compete with Teofimo vs. Kambosos

What could hurt the pay-per-view sales on Showtime for the Mayweather vs. Paul broadcast is the decision to schedule the fight on June 5th, which is the same night as the Triller Fight Club pay-per-view fight between IBF/WBA/WBC Franchise/WBO lightweight champion Teofimo Lopez and George Kambosos Jr.

If the Mayweather – Paul card runs up against the Teofimo vs. Kambosos Jr fight on June 5th, it’ll result in fewer pay-per-view buys for BOTH cards.

Mayweather and Logan won’t be able to make the kind of money they thought they would if they compete with Teofimo’s card, and vice versa. Teofimo’s card will be hurt as well.

The timing is bad for Mayweather to be running his fight up against the popular Teofimo Lopez, who is coming off an important win over Vasily Lomachenko last October.

Teofimo has proven to be excellent at generating interest for his fights by giving interviews and frequently posting on social media. His opponent Kambosos Jr has quickly shown himself to be comparable to Teofimo with his ability to drum interest in his fight by trash-talking and making himself available for interviews.

Kambosos Jr is even better at trash-talking than Teofimo. He’s certainly more inventive with the things he says.

Mayweather to be a huge favorite

Floyd is expected to be a tremendous favorite with the oddsmakers to defeat Logan, who has none of the power or boxing ability that his brother Jake Paul possesses.

Indeed, many boxing fans wonder why Mayweather picked Logan to fight rather than Jake, seeing that it would make more sense for him to face the more talented of the two brothers.

Additionally, Jake and Mayweather already have bad blood with the two trading trash talk. The most logical explanation for why Mayweather hand-picked Logan for his next fight is that he’s less dangerous than Jake.

If Mayweather fought Jake, he could get hurt because he punches harder than the fighters he’s fought during his pro career.

Jake is a legitimate cruiserweight with power. The biggest guys Mayweather has fought during his career were 154-pounders, who didn’t possess the power that Jake has.

Although Logan looks muscular for a cruiserweight, he doesn’t have the power of the 24-year-old Jake, who obliterated former MMA fighter Ben Askren, in a first-round knockout last Saturday night on Triller pay-per-view.

The 44-year-old Mayweather is fighting for the first time in three years since destroying the 22-year-old Japanese kickboxer Tenshin Nasugawa in the first round in an exhibition match on December 31st in Japan. Before that, Mayweather defeated UFC star Conor McGregor in 2017.


« The Time Larry Holmes was KO’d by his Trainer Ernie Butler!