By Sean Jones: Canelo Alvarez and Billy Joe Saunders spoke earlier on Wednesday during their virtual press conference to discuss their fight on DAZN on May 8th at the AT&T Stadium in Arlington, Texas.

At one point, Hearn asked Saunders, 31, about his thoughts on Canelo already looking ahead to a fight with IBF super middleweight champion Caleb Plant.

Saunders then replied by throwing it back on Hearn, saying, ‘You should know.’ He basically let Hearn know that he thinks he’s a part of Canelo looking to put together a site deal for the Plant fight ahead of their May 8th clash.

Billy Joe feels that Canelo’s camp sees him as a sure thing win, and he’s not happy about the planning and the fact that the fight won’t have a British judge working among the three officials.

When Saunders was negotiating the fight, he thought that it wouldn’t have crowds, and now it’s been revealed that there will be a crowd of 70,000 on the night at the AT&T Stadium.

It’s unclear whether Saunders would have asked for more money during negotiations if he thought there would be a crowd present for the fight.

“I would mean the absolute world for me,” said Saunders during Wednesday’s virtual press conference for Canelo fight. “This fight is always going to be legacy because of what’s on the line.

“A lot of people are only giving me a chance to take part. My victory is already written in my head, and I only need to follow the script. I understand this event isn’t a joke.

“Canelo has been on my radar since I turned pro, so he’s one of the two that has always been there. Now is my time to shine.

“They didn’t win, did they? So I don’t think the movement is key,” said Saunders when asked if he’ll use movement against Canelo the way that other past opponents like Erislandy Lara did.

“I’m sure it helps. Where you move is more key in this fight. I think the movement is important in this fight because when those bombs come, I need to move out of the way.

“So obviously, it helps. We don’t know until the bell rings. When that bell rings, we’ll see what happens. He’s the most devastating puncher on the planet and the more fearsome man on the planet,” said Saunders.

It’s a good idea for Saunders to use movement because he’s not going to win the fight if he stands in one place the way that Canelo’s last two opponents did.

Using movement, jabbing, and taking away Canelo’s counter-punching ability is essential for Billy Joe. Canelo likes to throw his left hook counter after his opponents throw a right hand. He’s dangerous with that punch.

If you’ve got a steel chin like Gennadiy Golovkin, you can throw right hands and not be as concerned about his left hook. That’s obviously why Canelo doesn’t like fighting GGG. Those were painful fights for the Mexican star because he got hit by Golovkin.

Billy Joe vows to throw a spanner in the works

“I only hear you talking about that fight from Canelo’s camp, Eddy. So you tell me more,” said Billy Joe about the talk o Canelo’s September fight with Caleb Plant.

“I’ll be looking to put a spanner in the works for that. Same as I did with previous champions when they were talking about other fights.

“They’ve gotta beat me first. Just be Billy Joe Saunders,” said Billy Joe when asked how he can pull off one of the biggest upsets in British boxing history.

If Saunders wants to throw a spanner in the works to stop Canelo’s plans of fighting Plant for the undisputed championship in September, he’s going to have to really put it on him.

Canelo is the A-side, and there’s no way that Saunders will be able to win a decision against him unless he does something extraordinary.

He would have to fight in a similar way that Floyd Mayweather Jr did to beat Canelo by a decision. Even Mayweather was unable to win a unanimous decision. To beat Canelo, Saunders will need to outclass in the same way he did in his win over David Lemieux four years ago.

“It’s very important to make history,” said Canelo Alvarez. “These fights are very important for what we want to achieve in boxing. I am very happy to be on the path, and we are training at 100%, as always, to reach our goals. 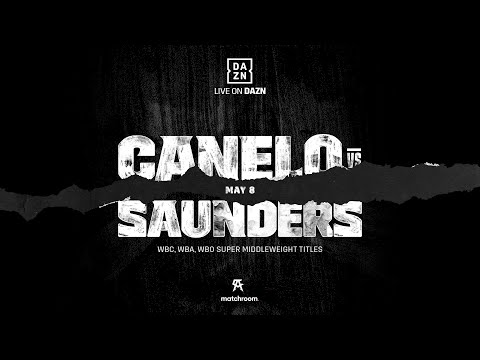 “Yeah, I know what Billy Joe brings. He’s a fast fighter that moves a lot. He’s a left, a difficult opponent. But at this level, I have to adapt to any style, and I’m ready to make history and for any style.

“I feel really happy. It’s a big responsibility to represent Mexico on these important dates. I’m really happy to be bringing it all back, especially in boxing. I’m looking forward to a lot of support at the stadium with them yelling, ‘Canelo.’

“I think it’ll be incredible. And I really feel like I’m in my prime. I obviously wanted to fight after 13 months without a fight. So that’s why I’m fighting three times in a little more than five months, and I’m feeling very happy and ready.

“I’m always ready to fight, and boxing is my life. And I’m very happy to be so active. I’m going to win without a doubt. I’m here training at 100%. I came to win, I came to make history, and that’s the only thing going through my head,” said Canelo.

Right now, Canelo is fighting at his best, and he’s picking his opponents well. We don’t know how Canelo would do if he were to fight the likes of Jermall Charlo, David Benavidez, Golovkin, Demetrius Andrade, or Edgar Berlanga.

We’ll see how things go for Canelo against Saunders and Plant. If he can beat those guys, the boxing public will expect him to fight better opposition.


« Can a win over Pacquiao make Crawford Vs. Spence happen?