Ricky Hatton: Dillian Whyte’s career may be over if he loses

By Charles Brun: Ricky Hatton says Dillian Whyte’s career may end this Saturday if he loses to Alexander Povetkin a second time in their rematch on Gibraltar.

The former two-division world champion Hatton is especially concerned with Whyte (27-2, 18 KOs) suffering a second brutal knockout like the one he experienced last August at the hands of the former WBA heavyweight champion Povetkin (36-2-1, 25 KOs).

No stranger to being knocked out, Hatton says it’s difficult to come back from a KO loss like the one the 32-year-old Dillian suffered against Povetkin.

There are demons that Whyte would need to face inside the ring each time he got hit, and he’s not sure that he can deal with them.

Hatton didn’t discuss the genuine possibility that Whyte’s punch resistance may not be what it was before, and he could be susceptible to getting knocked out easier this time.

Is Dillian making a mistake fighting Povetkin so soon?

It wasn’t a simple knockout that Dillian suffered last summer against Povetkin at the Matchroom Boxing headquarters in Essex. That was a devasting KO in which Whyte went to sleep for several moments.

Coming from a knockout like that in less than a year, it’s asking for trouble.

I mean, you’d like to think that Eddie Hearn and Whyte’s other management at least tried to talk some sense into him to take few tune-up fights first before getting back in there with Povetkin.

“I think it’s a must-win fight for Dillian,” said Ricky Hatton to iFL TV. “You can never say never. If he gets beat, he can stay at it, and I have no doubt that Eddie would give him another shout.

“That’s what Eddie is all about. That’s what he’s proved time and time ago with fighters, and Dillian happens to be one of them. He got straight back in there with a rematch.

“It was a heavy, heavy knockout defeat, wasn’t it?” said Hatton about Whyte’s knockout loss to Povetkin last year on August 22nd. “He was boxing absolutely brilliant.

“He was boxing, winning rounds, he knocked him down, and he got up. To get knocked out like that, it’s very, very hard to come back from. But I know he’s very strong-willed, Dillian.

It’s evident that Dillian is in a ‘must-win situation with this rematch with Povetkin, and if he loses a second by knockout, it’s pretty much over for him.

Whyte would be heading down the David Price trail, the boulevard of broken dreams.

Certainly, Eddie Hearn will keep throwing bones to Whyte regardless of him being knocked out again, but it might be pointless if his chin is too tender for him to take the shots from his opposition.

“But if he [Whyte] was to get beat and if he was to get stopped again, I think David Price was a prime example,” Hatton said in comparing Dillian to Price.

“After he got beat that first time [by Tony Thompson], and he got stopped, he could never get it back. I think that if Dillian could come back, I think his confidence would go through the roof.

“Let’s say he [Whyte] stops him, having been stopped himself, to stop him again; his confidence would be at an all-time high for Dillian.

It’s not a bad comparison, Hatton putting Whyte in the same category potentially with David Price.

If Whyte gets knocked out a second time by Povetkin, you got to compare him to how heavyweight David Price chose to fight Tony Thompson in an immediate rematch after being knocked out by him.

Rather than going in a different direction to build himself back up, the 6’8″ Price foolishly fought Thompson right away in a rematch and was knocked out a second time by the American.

Unfortunately, Price’s once-promising career was never the same after that second defeat. It’s easy to look back at Price’s career and say what he should have done, but that was the decision that he and his management made.

Now, we see Whyte make the same move as Price. You hate to say it, but it’s hard not to see the same thing happen to Dillian.

Again, it won’t be the end of the world for Whyte if he loses, but his dreams of fighting for a world title will be permanently dashed.

The only way Whyte will get a title shot at that point is if Hearn chooses to have Anthony Joshua give him a freebie.

Dillian’s career may be over if he loses

“But if he was to get beat, another heavy defeat, another knockout defeat again, sadly, I think you have to say, ‘Dillian, you had a good career, but I think that might be the end of it,'” said Hatton. 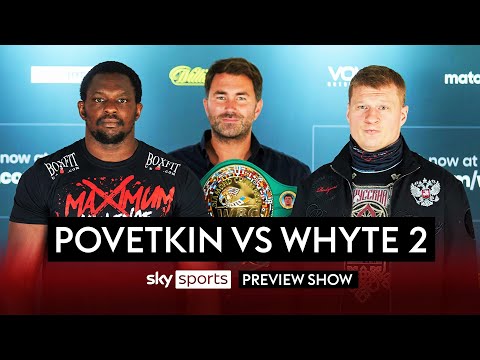 “It’s sad; it’s a hard game boxing. When I got beat by Floyd Mayweather, and I found Juan Lazcano next; You know your first fight back from a defeat and a knockout.

“Every time he hit me, I felt like he wobbled me. He didn’t, but that’s what I had in my mind. That’s the demon you’ve got to put behind you, so it’s very hard coming back from a knockout defeat.

“I think that’ll be the case [for Whyte],” said Hatton in hoping that Dillian will be able to come back from his shocking upset loss.

A second loss for Whyte will put him in the same class as journeyman Dereck Chisora. Dillian can still make money fighting on Sky Box Office, but he won’t be fighting for a world title.

Chisora has carved out a nice career fighting on Sky Box Office despite not fighting for world titles. I’m sure Whyte will continue to be a pay-per-view fighter regardless of how badly things go for him on Saturday against Povetkin.

“It’s all or nothing,” said Eddie Hearn to iFL TV on Dillian’s rematch with Povetkin. “Dillian Whyte must win, and I can’t wait.”


« Dillian Whyte: “This is the biggest fight of my career” – Whyte vs. Povetkin 2