The former WBO light welterweight champion Hooker (27-2-3, 18 KOs) suffered his right-hand injury in the 7th round when he threw a shot that hit the top of Ortiz’s head.

Once the punch landed, Hooker dropped to his knees in pain, clutching his right hand. It was a case of Hooker landing a shot in the wrong spot.

These kinds of injuries often occur when fighters throw punches that land on the crown of their opponent’s head, so it’s not surprising that it happened.

Nevertheless, it’s bad news for Hooker, as he’d been out of the ring for a year and a half when he fought Vergil Jr (17-0, 17 KOs) last Saturday night in their headliner on DAZN from the Dickies Arena in Fort Worth, Texas. 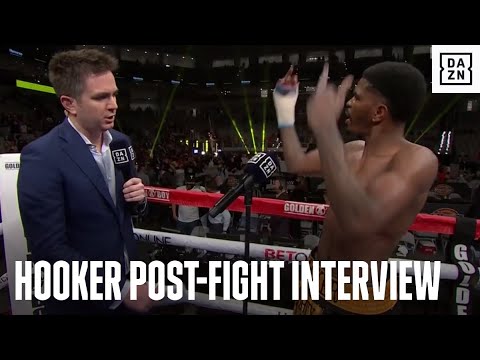 The injury will keep the 31-year-old Hooker in a cast for one month, and he won’t be able to punch for two months, says McIntyre.

Hooker put in an excellent performance, fighting the well thought of 22-year-old Vergil to a standstill for the first four rounds before he started having problems beginning in the fifth.

“Per trainer @BomacBrian, @mightymohooker visited a hand specialist today, and his right hand is broken from his fight Saturday vs. Vergil Ortiz.

“His hand is broken. Too swollen to cast. Splinted today and will cast Monday for at least 4 weeks. No hitting for 2 months.” #boxing,” said Hooker’s trainer Brian McIntyre to Dan Rafael.

The beginning of the end for Hooker came when a body shot in the fifth hurt him. Although Hooker stayed on his feet, he took some massive shots and was pretty well worked over in that round by Ortiz Jr.

Vergil continued to beat up on the quickly fading Hooker in the sixth round, knocking down with two heavy headshots.

Hooker took his time getting up from the knockdown, and it looked like he was done at that point. For Hooker to make it out of the round is a credit to his toughness as a fighter.

That would be a tough opponent for Hooker to come back against, given how much punishment he absorbed against Ortiz Jr. It’s up to Hooker, obviously, but he’s getting up there in age.

The inactivity didn’t help him either, and maybe he can’t afford to take things slow with his career. In that case, Rocha is a good option for him. Hooker would be better off returning to the 140-lb division if possible because he has more chances of doing something in that division than he does at 147.

“When Hooker is ready, Golden Boy is eyeing a matchup between Hooker and once-beaten prospect Alexis Rocha, per sources. GBP signed Hooker to a two-fight deal,” said Chris Mannix @SIChrisMannix.


« Crawford claims Canelo has shied away from black fighters