By Dan Ambrose: In a sign that promoter Eddie Hearn doesn’t believe Billy Joe Saunders has any chance of winning on May 8th against Canelo Alvarez, Eddie has already started talks for the September unification match between Alvarez and Caleb Plant.

If Canelo defeats WBO champion Saunders (30-0, 14 KOs) on May 8th, his next move will be to face Plant in September with all four belts on a network yet to be decided. What they’re trying to decide which network platform the Canelo-Plant fight will be shown on, DAZN or FOX.

Saunders doesn’t seem to be too bothered about Hearn already starting negotiations between Canelo and Plant.  Billy Joe’s reaction on social media to Hearn already negotiating the Canelo-Plant fight:

It’s possible that Saunders has become numb with the way that the boxing world is giving him zero chance of beating Canelo. As a result, it doesn’t phase Saunders that Hearn is already talking about the Canelo vs. Plant bout.

Another potential reason why Saunders isn’t feeling slighted by Hearn already discussing the Canelo-Plant fight is the massive payday he’s going to be getting against Canelo on May 8th.

With the money Saunders is getting from the fight with the Mexican star, he needn’t worry about getting a job for the rest of his life. He can live well, buy a large house, and kick back like a King.

Why make waves when you’re about to become wealthy overnight by fighting Canelo? We saw Sergey Kovalev and Danny Jacobs become instant millionaires after fighting Canelo, and now it’s Saunders’ turn. Why fuss if you’re Billy Joe when you’re going to be living on easy street after May 8th?

Saunders will obviously give it his all and try and beat Canelo, but he’s so ill-equipped in the power department that this shapes up to be a horrible mismatch.

DiBella expects Saunders to be more of a challenge

“I guess it could be much more competitive,” said promoter Lou DiBella to Secondsout on the Canelo vs. Saunders fight. “It’s interesting because if Saunders fights the fight that could upset the applecart, it’s probably not going to be the best fight on earth.

“If you don’t have size and strength over Canelo, it’s very hard to outbox him. His overall game is pretty strong, but Billy Joe, I expect him to be right for the Canelo fight, when he’s right, his style is hard.

“I think Saunders’ style when he’s in shape probably gives anybody at 60 or 68 some difficulties. It’s an intriguing fight, but it’s not one that I’m waiting in bated breath for. It’s not Chocolatito – Estrada kind of thing or Fury – Wilder or Fury – Joshua kind of thing. 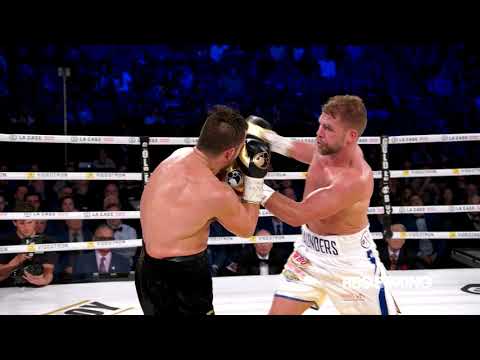 “I don’t know what Avni Yildirim was doing as a mandatory contender,” DiBella continued. “You know what bothered me about it actually?

“There’s nothing wrong with an overmatched guy getting a fight, but not only was he overmatched, but he did nothing and he quit like a dog or his corner his corner quit for him.

“I wasn’t in his corner so maybe he was in worse shape than he appeared to me. I guess it really didn’t matter because the end was inevitable,” said DiBellla on Yildirim being pulled out of the Canelo fight by his trainer Joel Diaz.

If Saunders can recapture the form that he showed against David Lemieux in 2017, Canelo will have a real problem on May 8th. That version of Saunders is all wrong for a short, flat-footed fighter like Canelo.