By Jeff Aronow: WBC lightweight champion Devin Haney is still hoping that he can put a fight together with Vasily Lomachenko. Still, he’s already begun negotiations with Jorge Linares in case that match-up doesn’t happen.

Haney (25-0, 15 KOs) is glad that the highly accomplished Lomachenko (14-2, 10 KOs) is finally showing some interest in fighting him, but he’s not happy that he’s coming off a loss to Teofimo Lopez.

Devin feels that the blueprint is now out there in how to beat Lomachenko after Teofimo exposed it. Although Haney doesn’t say what Teofimo did in creating the blueprint, the pressure that he put on him likely is what he’s referring to.

Haney’s dad Bill says they’ve made a seven-figure offer to the 32-year-old Lomachenko, and they’re waiting to see whether he’ll accept it. Bill didn’t say whether Loma has rejected it. He’s just waiting for him to agree to it or not.

“A lot of people don’t know that I broke my hand two or three months before the fight, so I wasn’t 100%,” said Haney to Fighthype about his last match against Yuriorkis Gamboa.

“I still got the job done. Jorge Linares is the frontrunner, but I’m still looking forward to making a fight with Loma. If not, it’s going to be Linares.

I’m happy he finally acknowledged that he’s interested in the fight. It sucks that it comes after he took a loss. I’d rather him if it was on top. A fight between me and Loma would still be huge, and it’s a fight that I would still love.

“It doesn’t matter. I want to keep climbing and keep beating them one fight at a time. Teofimo did lay the blueprint in how to beat Loma. It just shows that he can be beat; there are different ways he can be beat,” Haney said.

“The whole fight, I was hiding it, I didn’t want anyone to know,” said Haney fought Gamboa with a recently broken right hand.

“No excuses, Gamboa came to fight. It was my fault for saying I was going to get the knockout. Now I know that every fight isn’t going to be a knockout.

“You can’t go in there looking to get a knockout. You go in there and get the win. If the knockout comes, it comes,” said Haney.

There’s a lot more to gain for Haney fighting Lomachenko than Linares, who has been knocked out five times in his career.

Linares likely next for Devin

“I like that he’s showing interest and really wants to fight, but when your team has an offer, and we’re negotiating, I don’t understand what you’re talking about,” Haney said about Linares. “We are still talking. Let the promoters do their job, and we’ll meet in the ring.

“When I sparred him, I was really young,” said Haney about Linares. “I was 17. I’m much more stronger, much more faster. To be honest, I don’t really remember the sparring that well.

“I don’t think he can match my hand speed, but I do think he’s fast,” Haney said of Linares. “I’m sure he is the fastest fighter I’ve fought today, but I feel speed is nothing without timing.

“If a guy has timing and another guy has a whole lot of speed, the guy with timing will nine times out of ten beat him. You can throw a million punches and miss.

Linares, 35, will still be a tough fight for Haney despite his age and his history of being knocked out. Haney says he thinks he’s got better hand speed than Linares, but that might not be the case. Linares looks faster, and he definitely has better power.

The way Haney talks about their previous sparring together, it seems clear that Linares got the better of him. That was five years ago when Haney was 17, and he feels like he’s made improvements in his game.

“It’ll be me being victorious,” said Haney when asked to visualize how a fight between him and Linares will go.

“We don’t know how exactly it’ll play out, but, of course, I see myself victorious. I made a mistake in the Gamboa fight trying to chase a knockout. I know Jorge Linares is a good fighter; he’s been in there with the best.

“I know he’s going to bring his all. If the knockout comes, it comes. He always rises to who he fights, and I do think that’s his mistake.

“He might be underestimating me a little bit because when we were younger, we sparred, and I wasn’t as good as I am now. I’m not saying he got the best of the work.

“It was great work, but he might be looking at the Gamboa performance and thinking, ‘Oh well, he didn’t do this, or he didn’t do that.’ But he’ll see when the time comes,” said Haney.

Well, if Haney loses to Linares, he can blame the loss on experience because he’s not had the chance to fight a lot of different guys yet.

Linares has been around for a long, long time, and he’s fought a lot of talented fighters that Haney hasn’t had the chance to. 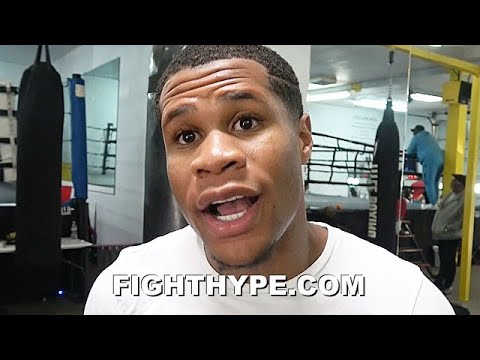 
« Grading the Prospects from Saturday: Raymond Ford and Austin Williams