Crawford on Spence fight: ‘It’s over with, don’t ask about it no more’

By Chris Williams: Terence Crawford said he’s “over” the Errol Spence Jr fight, and he no longer wants boxing fans to keep reminding him about the fight. Crawford (37-0, 28 KOs) says he’s “done” with it.

Fans are still wondering why Crawford, 33, won’t take the fight with Spence OR Vergil Ortiz Jr, but he’s got his reasons.

Crawford is still dragging his heels about a fight with Spence, Vergil, and Shawn Porter, believing that he’ll somehow get the Manny Pacquiao fight.

Crawford seems unable to grasp the reality that his hopeless pipe dream of getting a fight against the former eight-division world champion Pacquiao (62-7-2, 39 KOs) has virtually no chance of happening.

Rather than accepting what is real, Crawford is holding out hopes that his dream fight with the 42-year-old Pacquiao will take place. 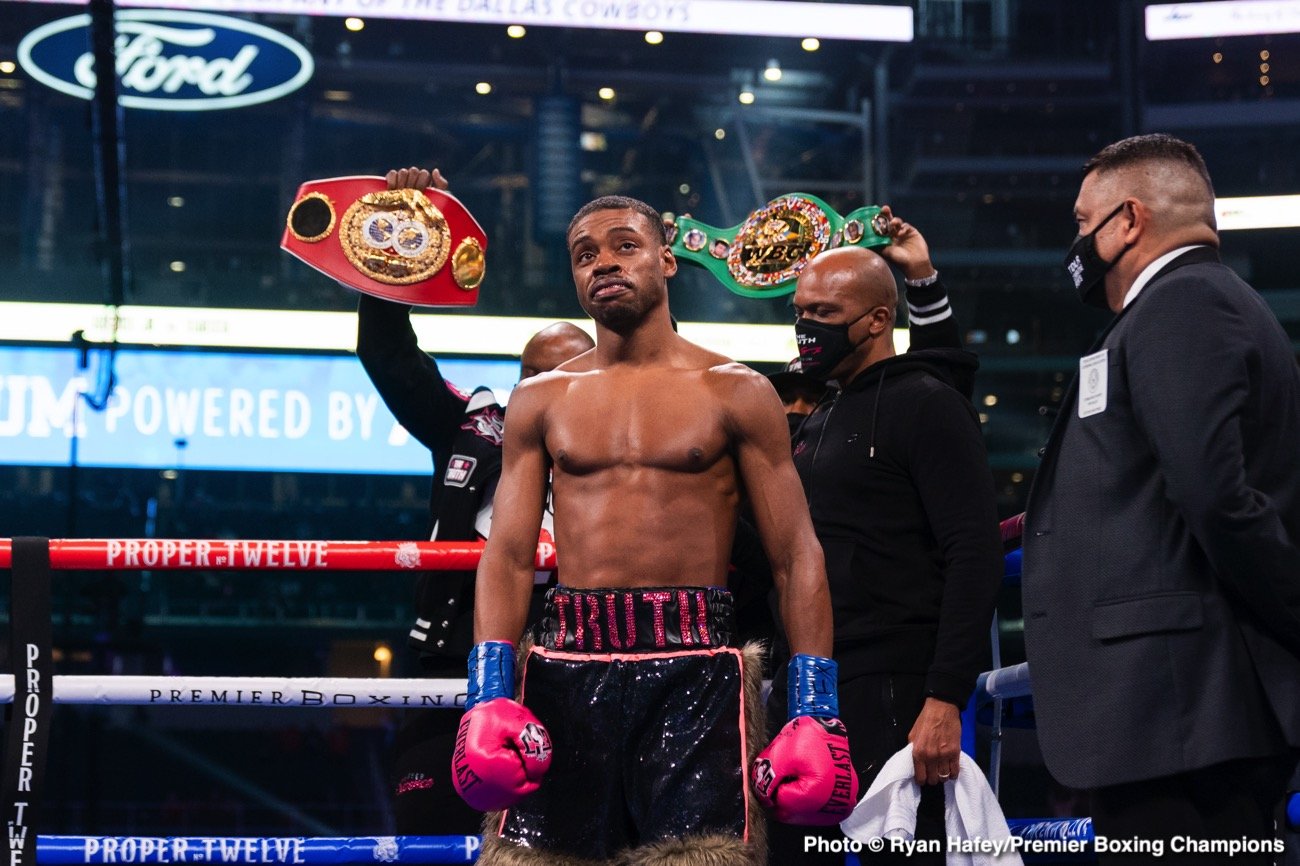 Hopefully, for Crawford’s sake, he wakes up from his dream and takes the fights that are there for him against Spence, Vergil or Porter before he becomes an older man and has missed out on his opportunity.

Spence about to add to his credentials

Spence is about to face WBA 147-lb champion Yordenis Ugas in July in a unification match.

If Errol wins that fight, he’ll hold the IBF, WBA, and WBC 147-lb titles, which means that Crawford won’t be in the bargaining position to ask for a 50-50 deal.

The 60-40 split that Spence had been offering Terence for a fight would be considered very, very generous at that point. Not only would Spence had three titles compared to Crawford’s one, but he would be the bigger ticket seller and the bigger pay-per-view attraction.

In addition to that, Spence’s resume is superior to that of Crawford, whose best name on his 13-year record is Viktor Postol.

“I done heard it all but glove up. I’m over it, lol when I say it’s a rap, then that’s that it’s over with, don’t ask me about it no more. And I’m done talking about it,” said Terence Crawford on his Twitter about not being interested in fighting Spence.

“My bad for giving y’all real facts. A lot of y’all still gone be mad at me. I know everyone wants this and that, but believe me, everyone in hell wants ice water, and do you think they get it? So what that tells you. Y’all really my motivation,” said Crawford.

This is so sad to see Crawford throwing away his opportunities because he can’t get the 50-50 split that he doesn’t deserve against Spence.

A 60-40 split would give Crawford a massive payday and would open the door for him getting the lion’s share of the loot in a rematch with Errol if he wins.

I mean, I don’t think Crawford would win against Spence, but in theory, he could be the king for the rematch, turning the tables on Errol.