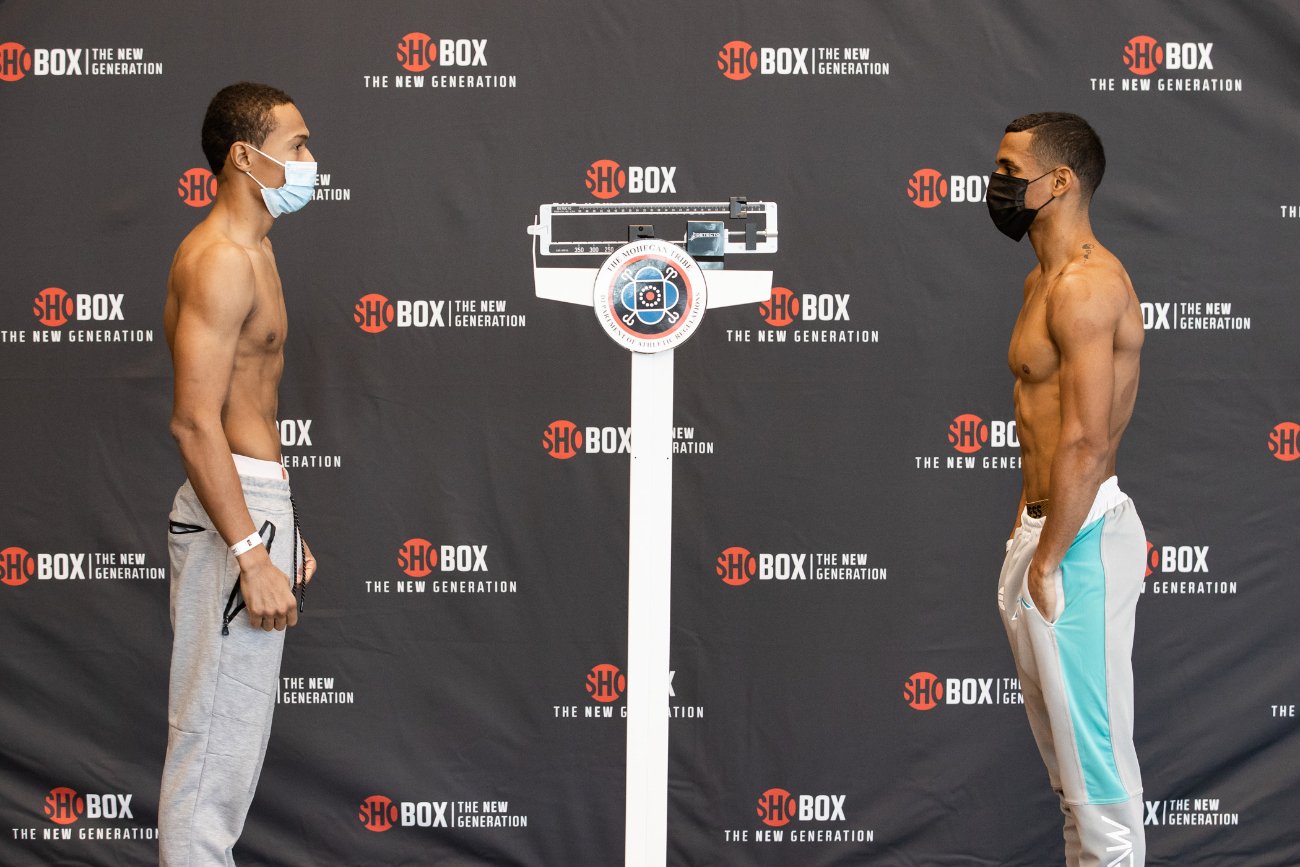 Making his super lightweight debut after campaigning primarily at 135 pounds over his first 15 professional fights, Solano (15-0, 10 KOs) returns to ShoBox to face the first undefeated fighter of his career in East Hartford, Conn.’s Mykquan Williams (15-0-1, 7 KOs). The 22-year-old Williams was an amateur standout who was featured in Ring Magazine’s “New Faces” column in 2019, which highlights the sport’s rising prospects.

The event is promoted by Sampson Boxing and Paco Presents Boxing, in association with DiBella Entertainment, Kings Promotions and Salita Promotions.

“I feel comfortable moving up to 140 pounds because I feel that I’m much stronger at that weight. I feel that ultimately, this is a good move for me because I can be a much better fighter at 140 than at 135. In my last fight against Araujo, my legs were kind of gone. I attribute that to not properly hydrating and it affected me. He was honestly the toughest opponent of my career, but we got the job done. I learned that after weigh-ins, I can’t become careless. I need to still be disciplined with what I eat because that definitely affected me in the fight.

“I don’t think the long layoff is going to affect me at all. I’ve been training for a fight for a long time and unfortunately because of the pandemic we had a couple dates fall through. But, throughout that whole time, I’ve been in the gym training. It won’t affect me at all. I won’t start slow. I’m strong. I’ve been working hard and I will show that on fight night.

“I know that Williams is a good local fighter. I think this is going to be a good fight. Williams is very fast. He moves really well, but we have a plan to negate his speed. I’ve worked really hard on my conditioning so that I can maintain my pressure throughout the fight and I don’t think there’s going to be a round that I won’t be up on the scorecards.

“This will be my second fight in the United States. Since I’ve been training here, I’ve definitely noticed a difference in the caliber of fighters here versus in Colombia. One of the main differences is that here in the U.S., fighters are more technical. They are also more prepared, but I’ve been getting used to this style in training.

“Williams is definitely a step-up from Araujo. I look at it as an opportunity for me. It gives me a chance to show that I am in a good position now and I can’t wait to show everybody what I have.”

“I’m not really paying too much attention to the fact that there won’t be a crowd. The fact that I’m from Connecticut probably is a little bit of an advantage because I’m going to be a little more comfortable – I don’t have to travel from out of state or anything like that-but I still have to go out there and show the judges that I want this fight. At the end of the day, it doesn’t really matter.

“Training went well. We were training before for another fight that was supposed to be on December 12, so we were already in shape. We just continued the training camp. I’m not at all concerned about the layoff. We did our part in the gym. We sparred with several people. Several rounds. I’m not saying there isn’t going to be any ring rust because I’ve been out 14-15 months, but we’ve done our part in the gym to eliminate any serious problems.

“I watched a round or two of Solano’s last fight, but that was it. We definitely worked on some specifics that can help me in this fight, but once we get in the ring, I’ll be able to make the necessary adjustments if need be as well.

“I’m not going to say this will be an easier fight than my last one against Wiggins. I don’t think any fight is easy. I think that I’ll have more success against this opponent, though, because of the size difference. I’ve faced about five southpaws in my pro career, so this won’t be anything new.”

“For this fight, I started my training camp in Panama during the pandemic. Later, I came to the U.S. and finished my camp in Coachella, California with Freddy Fundora. This is my first time in the United States and I’ve been training with Freddy for exactly one month. He has helped me so much already. I’ve learned a lot from Freddy, which I will show in the fight. His training camps are very rigid and very difficult, so I know that I’m going to come into the fight very prepared.

“The truth is that I don’t like to watch videos of any of my opponents. I leave that to my trainer. I trust him to do his job and come up with the right game plan. My job is to go out there and execute that game plan and come out as the victor.

“There is a different game plan every fight. Every opponent is different. I can adapt to any scenario and whatever is put in front of me. If I feel the opponent doesn’t have much power in his punches, I have no problem staying in there with them and mixing it up and giving the fans what they want to see. But I also can be a counter-puncher. It all depends.

“I’m not too concerned with the fact that my opponent seems to be a slow-starter. Yes, if I find the opportunity to get him out of there early, I will take that chance. But I am more focused on winning on that night any way that it comes. I just want to give the public a good spectacle.”

“I made the move to train with Edmund Tarverdyan because I had a fight with him in 2019 before I started with SugarHill and I feel really comfortable with him. I have a physical coach as well, Jesse Forbes, and I need both of them. I feel comfortable with Coach Ed, so the style, the sparring partners, everything is more comfortable here. In Detroit, I didn’t have the right sparring partners. I always sparred with much heavier guys, so everything here in Glendale Fighting Club is a better situation for me.

“It’s true that I’ve been a slow-starter in the past. It’s something that we’ve worked on in sparring and I’m going to be starting a bit earlier this time, especially because it’s only an eight-rounder. It’s definitely a mental and physical adjustment that I’ve had to make. In the fight against Aguero, he caught me in the second round. At that time, all I could think about was my son who had just been born. I was fighting for him, so I couldn’t lose that fight. That’s all mental. But I also really needed to step up my aggression and throw a lot more punches. That part was physical.

“I think that I am ready to be considered at contender status now. I’m a championship-level fighter now. I’m always ready. When you stay ready, you don’t have to get ready. I’m in my prime and the time is now.

“I wouldn’t say that my last fight gave me any added confidence that I didn’t already have. Even since the amateurs, I’ve been fighting really tough guys. I’m taking it one step at a time and seeing how I do. My last fight in The Bubble in Vegas – the biggest differences were that I didn’t have my normal routine in terms of the food I usually eat, and I wasn’t able to see my therapists after weigh-ins.

“My fight back in February 2020 was just one round, so I really wasn’t able to learn a lot about myself. I didn’t know what I had to do next. My last fight, the one in June, really showed a lot of my weaknesses. It really showed me what I have to get better at. It was a tough fight and I’m really looking forward to proving that I’m an even better fighter than I showed I was against Pedro.

“I am definitely aware of the history of ShoBox and the fighters the series has produced. My promoters want me to fight better guys, and it’s something that I’ve been asking for from my team for a long time. I think I will fit really well into the ShoBox philosophy. Hopefully, the fans will be impressed and say that I can move really well after they watch me on Wednesday night. That’s what I want to highlight.

“I haven’t seen much of Pedro but everybody keeps saying that he’s a really hard worker and that he’s a really strong fighter. I saw the fights that were available and we have a really good game plan for how to beat him. It won’t be the battle of who’s stronger. It’s going to be a battle of wits. I want to prove that I can become a strong contender and this fight is really going to show myself that I can do it.”

“In my last fight, I beat a tough fighter who was 30-1. On paper, it was definitely considered an upset. Because of the experience he had and his record, everybody thought that he was the favorite. I never worried about the record and all of that. It didn’t really impress me. That’s the mentality I went into the fight with.

“I’ve watched a couple of Jules’ fights. The main things that I took away from watching him is that he’s a taller fighter and he uses his jab really well, so we will have to game plan for that.

“I’m not at all worried about this being my first fight in the United States. I’m just focused on my preparation and my game plan. To be honest, in a lot of my fights in Puerto Rico, I’ve been the underdog. I don’t want to put any pressure on myself just because I’m fighting here in the States on television.

“This is my first fight in the U.S. and my first fight without any fans. I’m going to treat this fight like I’m just in the boxing gym. That way, I won’t have any pressure and I won’t be worried about the lack of a crowd. When you’re coming up in the boxing world, you don’t have a big audience anyways. For me, it’s better to just treat this as being in the gym working out. That’s how I’m going to focus and look at this fight.”