Ryan Garcia tells Tank Davis – ‘You will not touch me’ 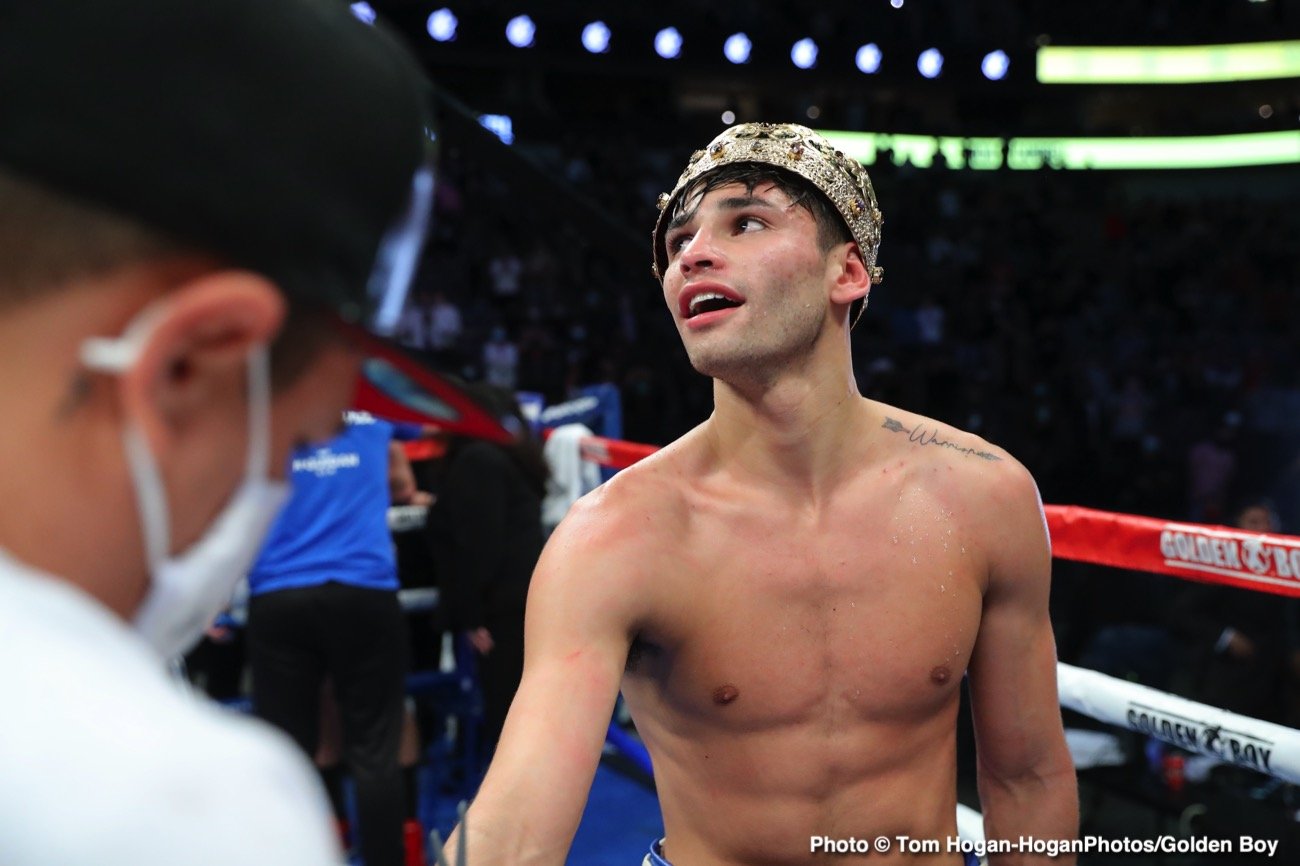 By Sean Jones: Ryan Garcia says he’s going to use his height and reach to dominate the shorter Gervonta ‘Tank’ Davis to beat him without him being able to touch him.

Ryan is still staying. He’s going to knock out Davis in two rounds, but he’s added to that by letting fans know he won’t get in punching range.

The two fighters still haven’t begun negotiations, but that hasn’t stopped ‘King’ Ryan (21-0, 18 KOs) from hyping the fight as if it’s already scheduled.

Garcia’s promoters at Golden Boy Promotions will need to get the negotiations going with Tank’s promoters at Mayweather Promotions. Ryan, 22, can’t afford to invest time in marketing a fight that might not be happening yet.

Oscar De La Hoya appeared to be hitting the brakes as far as the Tank fight goes when he said on Friday that the fight would need fans. If that’s the case, Garcia vs. Davis might get pushed back into the winter months.

“Let’s just say that what I said on Mike Tyson’s Podcast is true. He [Tank Davis] is going to need a ladder to knock me out,” said Ryan Garcia to THE FIGHT with Teddy Atlas.

“You’re going to need a Stairmaster to reach me. There is no way you’re going to get close to me, but I already know there’s no there way for Gervonta to fight.

“You’re going to control range, which is one of your strongest points,” said Atlas.

People Are Hateful anyway might as well Just Be TruthFul so if they hate you, They really can’t have no control over you.

“I’m going to become [Luke] Campbell and then knock him out,” said Ryan in continuing to talk about Tank Davis. “But I’m going to be me, and me is different.”

It’s going to be difficult for Ryan to keep Davis outside without a jab, as he doesn’t have one. Ryan throws a weak pawing jab, and he depends on his left hook as his sole source offense.

Tank (24-0, 23 KOs) will be able to slip King Ryan’s left hook, and he could hurt him on the inside the way he did Leo Santa Cruz.

Davis knocked Santa Cruz out cold with a left uppercut in the sixth round last October.

“I’m going to control range great. You’ll see in the ring,” said Ryan Garcia. “I obviously don’t want to give away too much of my game plan, but he knows.

“He has to come at me anyway, it’s no secret. You’re going to have to come at me. Are you going to try and outbox me from a different range? Good luck.

“You can try that too. Do whatever you want, Gervonta. You will not be able to touch me. I know you’re going to watch all these interviews.

“So really there’s no way you can beat me, and I’m talking straight to you, Gervonta. You know what it is. You’re going to be defeated before the ring. Thank you, bye,” said Garcia.

WBA World lightweight champion Davis probably won’t bother trying to box Ryan, as he’s going to be on a seek & destroy mission against him.

Davis has excellent boxing skills, though, and he’s more than capable of outboxing Ryan if he focuses on doing that. Tank is similar to Errol Spence Jr in how he can win in a lot of different ways.

If Tank wants to slug, he can win that fight. And if he decides to box, he can use his Mayweather-esque skills to win a decision.

“Thank God for me that I have a great adviser in Lupe Valencia that can reach both ponds, I guess you can say,” said Ryan when asked if his management can negotiate a fight with Tank Davis. 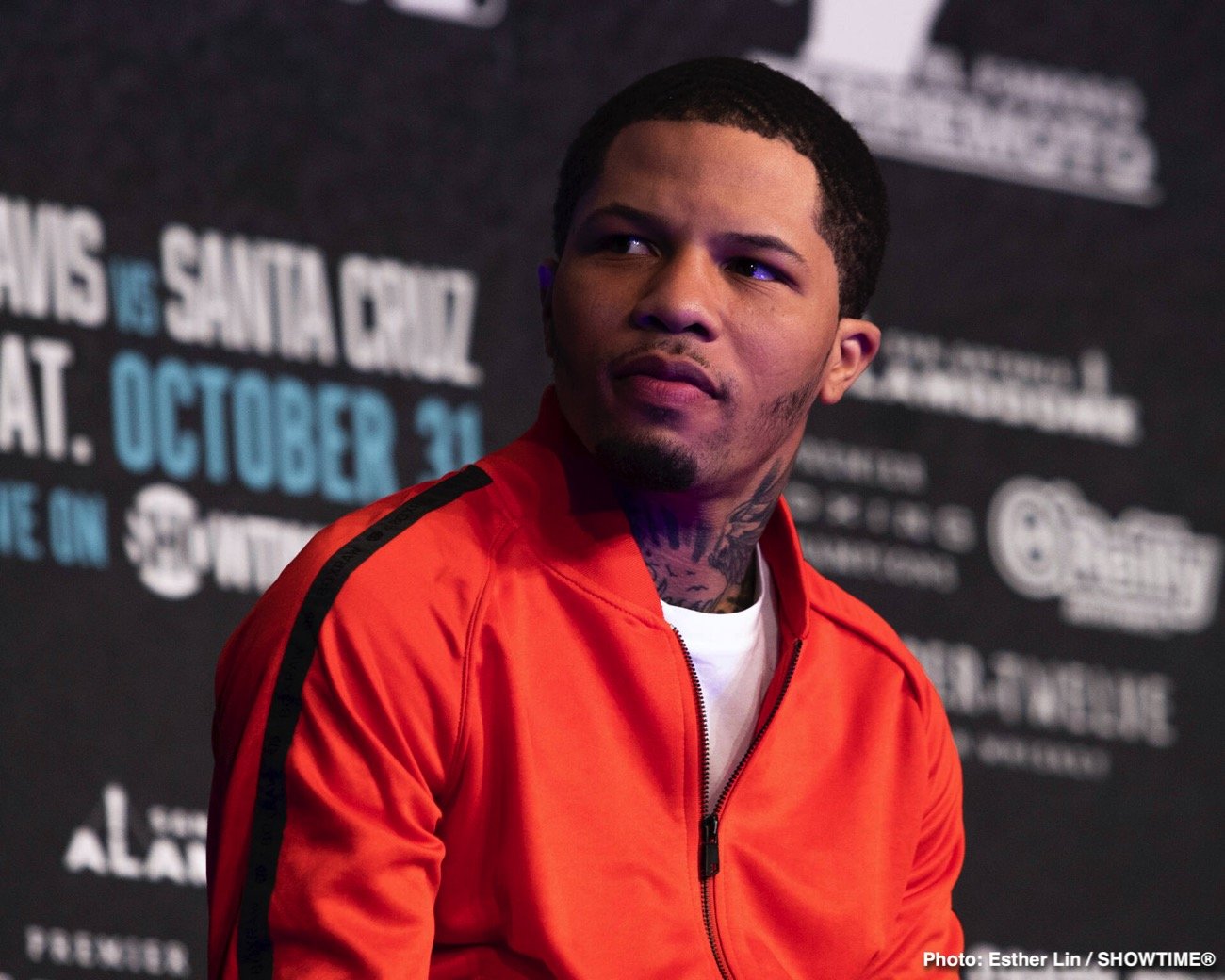 “The rest will be set. We’re good, were going to make this fight happen. One More thing. You said people were going to be betting on Tank. I got something for them. If you bet on Tank, you’re going to lose all in your bank,” said Ryan.

The biggest obstacle in getting the Davis vs. Garcia fight made right now is De La Hoya. If he wants to protect his asset King Ryan, he may drag his feet and start talking about a crowd needed to make the fight.

Teofimo Lopez: Lomachenko beats every other guy at 135 »