By Pete Strauss: Just moments ago, it was announced that Jamel ‘Semper Fi’ Herring (22-2, 10 KOs) and Carl ‘The Jackal’ Frampton (28-2, 16 KOs) will be squaring off next month in a 12-round title fight on February 27th in London, England. The Herring – Frampton fight will be shown live on BT Sport in the UK.

The winner of the Herring vs. Frampton fight will need to defend the WBO 130-lb title against Shakur Stevenson.

That’s going to be a big ask for either of those fighters because the 2016 U.S Olympic silver medalist Stevenson has superstardom written all over him.

You can argue that Stevenson and Frampton will be at the end of the road with their respective careers shortly. Frampton has a better chance of keeping his carer alive than the 35-year-old Herring if he can move back down to 126.

Frampton, 33, will be looking to capture his third division world title when he challenges the 35-year-old WBO super featherweight champion, Herring, for his belt. This is a big deal for Frampton because he would become Ireland’s first three-division world champion if he accomplishes that goal.

If the 5’5″ Frampton can figure out a way to deal with the five-inch height and ten-inch reach advantage of the American Herring, he’s got a chance of inning. But considering how much size Frampton is giving up, you can’t say he’s got a good chance of victory.

Frampton is clearly not a natural 130-pounder, and he’s out of his element in fighting in this division against the bigger guys.

It’s understandable why Frampton moved up to super featherweight since it had become difficult for him to make the 126-pound weight limit due to his advancing age.

Two years ago, Frampton reached the end of his rope at featherweight when he lost a 12 round unanimous decision to Josh Warrington in 2018.

This is a fighter that Frampton would have dealt with had he been younger, but he was too weight drained for him to handle the fast pace from Warrington.

After Frampton’s loss to Warrington, he moved up to super featherweight, where he’s quickly produced two impressive victories over Tyler McCreary and Darren Traynor.

Frampton started his career out at 122 in 2009, and he’s had a lot of success in capturing world titles at super bantamweight and featherweight.

Unfortunately for Frampton, his metabolism has slowed, and he’s now fighting against the much bigger opposition at 130. He clearly isn’t going to be able to continue his success for long. If Frampton isn’t beaten by Herring, he’ll almost surely lose against Shakur.

“I know he’s aiming to make history, but he’ll have to wait another day because I plan on returning home with my title in hand,” said the American Herring about Frampton’s dream of becoming a three-division world champion on February 27th. 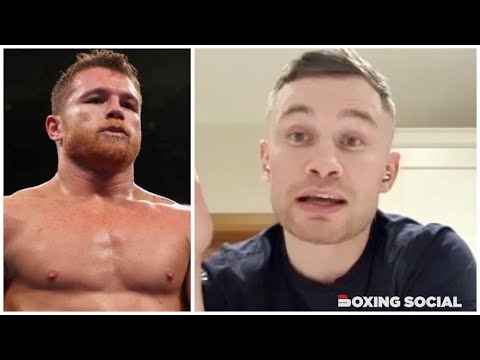 “I’ve been training very hard for this fight and went back to what got me to my world title from sparring the likes of Terence Crawford and other top talents across the nation. I can’t wait to put on a great show!”

It’ll be interesting to see which direction Frampton takes his career if he comes up empty against Herring. If the tiny 5’5” Frampton stays at super featherweight, he will have problems against the much larger fighters in the weight division.

The weakest link among the champions at 130 is Herring, and his time as a world champion is about up. Even if Herring were to beat Frampton, he’s not going to beat Stevenson.

This is as good as it gets for Frampton. If he were to go in another direction after losing to herring towards a fight against WBC super featherweight champion Miguel Berchelt, it would arguably be far, far worse for him. Berchelt is the class of the division right now.

Who will be the next megastar? »