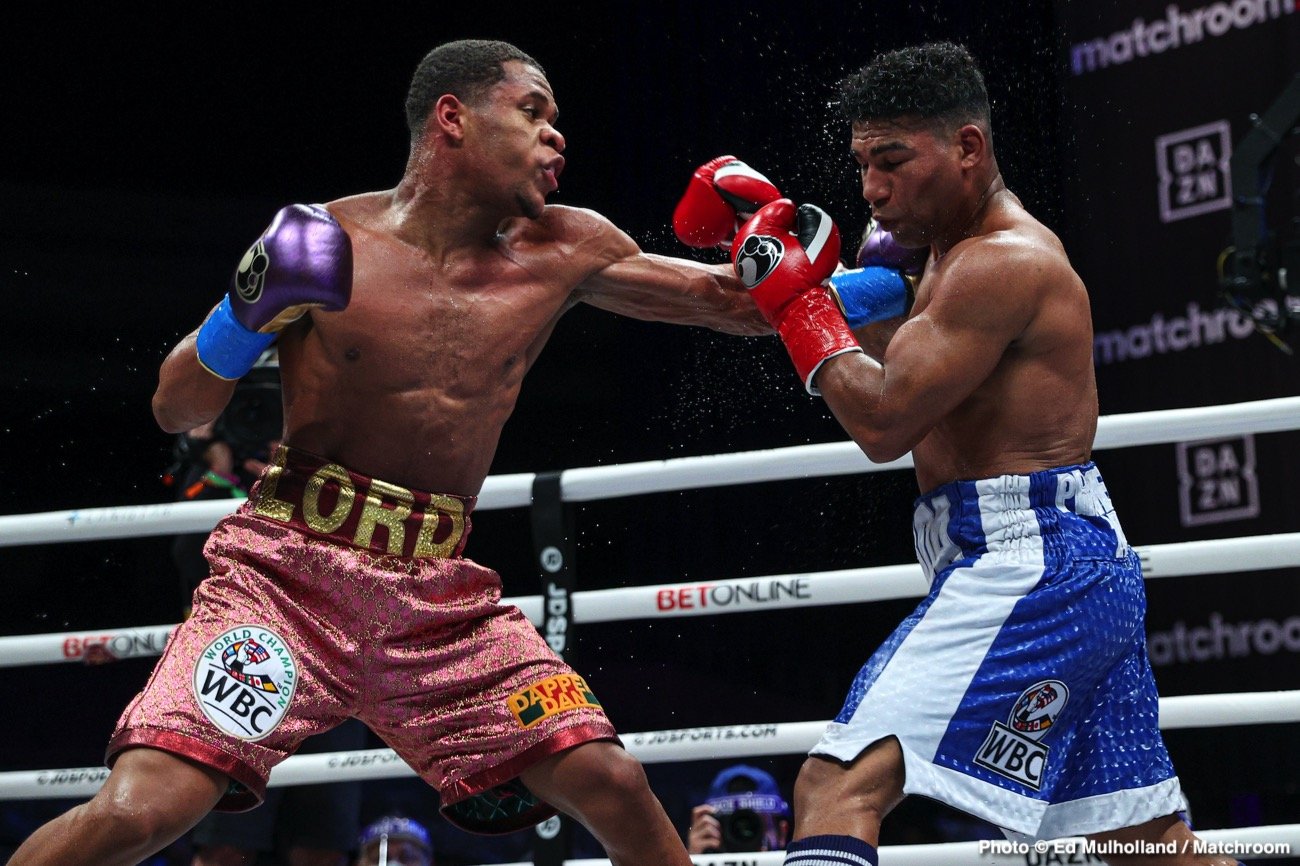 By Sean Jones: Devin Haney isn’t happy about Ryan Garcia choosing not to fight him next, and giving him advice that he should face Teofimo Lopez to earn a fight against him.

WBC lightweight champion Haney (25-0, 15 KO) thinks it’s odd that a challenger would be telling him who he, as the champ, should fight to earn the privilege of facing him.

Ryan (21-0, 18 KOs) has an upside-down view of boxing where champions don’t matter. Instead, it’s popular contenders like himself are the ones that hold the power.

With Ryan’s 8.2 million followers on Instagram, Haney can’t ignore what he’s saying because he’s the people’s champion at 135 and more important than any of the belt-holders right now.

Haney: Tank is an easier fight for Ryan than me

“I was upset because they basically finagled the fans there, finagled the people into thinking that he could fight whoever and it wouldn’t matter who he fought,” said Devin Haney to AK & Barak show about him being upset about being passed over by Ryan Garcia when he attended his recent fight against Luke Campbell.

That’s how hungry I am. I could sit back and relax and keep taking easy fights or whoever falls in line. I’m making great money, I’m a world champion, and these guys clearly don’t want to fight me.

“I could keep saying, ‘Whatever, I’m going to fight whoever they put in front of me.’ But in reality, I want to fight the top guys, and make the biggest fights happen.

“I just feel like he thinks Tank is an easier fight than fighting me, and he’s said this before. I’m just going by what he says. And I’m not going off. I’m not making this up.

“He thinks Tank is an easier fight, so he’s willing to fight Tank because he feels it’s a high reward, and it’s an easy fight. Why not fight him?” said Devin about Ryan supposedly going after an easier fight against Tank.

Boxing fans view Tank Davis as a very tough fight for Haney, and you can argue that most of them believe that h would beat him. Tank’s speed, power, and his southpaw stance will be a problem for Haney.

“We have the sanctioning bodies saying one guy [Teofimo Lopez] is undisputed, and the next guy is the WBC champion.

“And just twisting his words and saying one thing at this moment to get out of the question, and saying another thing to this guy just to get out of it,” said Haney in commenting on WBC president Mauricio Sulaiman said that Teofimo Lopez is the undisputed lightweight champion.

“I do understand what he’s [Ryan Garcia] saying. Belts are getting watered down.

“I never got to that point,” said Haney when asked if he’d thought of vacating his WBC lightweight title due to boxing fans believing that WBC Franchise belt-holder Teofimo is the real champ. ”

I got to the point where I said, ‘Why don’t we make the fight happen to where there will be no confusion?’ If the two of us were to fight, after the fight, there would be no confusion,” said Haney about him and Teofimo.

“Everybody would know who the real undisputed king is, and it would be nothing else, and I understand that. Does Teofimo understand that?” said Haney.

It would make sense for Haney to vacate the WBC title because boxing fans view Teofimo, the WBC Franchise champion, as the real belt-holder at 135.

If Haney got rid of the WBC belt, he could get ranked with the other sanctioning bodies, and force Teofimo to fight him.

It doesn’t look like Teofimo will be sticking around too much longer at 135, because he says he’s moving up to 140 by the end of the year.

“I think it’s a good fight,” said Haney about the Tank Davis vs Ryan Garcia fight. “And I think it’s a much better fight than a lot of people think that it’ll be.

“You have to knock him out because he’s still in the fight if you knock him down,” said Haney about what he learned from watching Ryan’s fight with Campbell. “He showed that aspect, but skill-wise, I didn’t see too much.

“Canelo #1, and I go with Crawford at #2,” said Haney about his choice for the top pound-for-pound fighters in boxing. “Crawford, he’s still knocking at #1.

“Of course, if Ryan is not the guy, I want to go towards Teofimo,” Haney said when asked who he wants to fight if he can’t get Ryan Garcia.

“If Teofimo ducks me and goes in another direction, I’m looking forward to fighting Javier Fortuna or Jorge Linares,” said Haney.

This week, Teofimo has talked of possibly facing Haney if he can’t negotiate a fight against his IBF mandatory George Kambosis Jr.

It’s unclear how serious Teofimo is about that, though. He said that he’ll be sending out contracts to Haney and Kambosis for a fight in late April or early May. Haney hasn’t received anything yet.

“I remember at a time when Loma wouldn’t even say my name,” said Haney when asked if he’d be interested in fighting Vasily Lomachenko.

“I was his mandatory and he wouldn’t say my name. He wouldn’t act like I even existed. It was like, ‘Do I even want to give you a shot? Do you deserve a shot right now? Or do I want to fight one of these young guys that are actually speaking my name and throwing me in the hat,'” said Haney about him being ignored by Lomachenko.

At one point, Loma wouldn’t even throw me in the hat with guys. He would act like I didn’t even exist. So it’s like, ‘Do I really want to give you a shot?'” said Haney.

It’s unclear whether it was Vasily Lomachenko that wasn’t interested in fighting Haney or his promoters at Top Rank whispering in his year, telling him not to show interest in that match.

Top Rank boss Bob Arum has been vocal about his feelings that there’s no money in a fight with Haney right now.

It’s easy to assume that Arum let Lomachenko know that a fight with Haney wouldn’t bring in the kind of money that he’s hoping to get for his fights. Haney’s defensive emphasis likely had something to do with Lomachenko not wanting to fight him as well.

Still, Haney would be better off taking the high road, and not being bitter and self-defeating by choosing to pay Lomachenko back by not giving him a title shot.

A victory for Haney over Lomachenko would be just as important as a win for him over Teofimo, Ryan Garcia, and Tank Davis.

Of course, if Haney doesn’t believe he can beat Lomachenko, then it makes sense for him to use the revenge line for why he doesn’t need to fight him.

“Which is true [that Haney can’t get the big names to fight him], and if I can’t get these big fights and it doesn’t work, then I’ll go up to 140. But right now, there are really no big names at 140.

“I think that would be a huge fight. I think all of them are tough, but I’ll make it look easy,” said Haney.

The money and fame Haney can get from a fight against Gervonta ‘Tank’ Davis would make it well worth taking the risk in fighting him.

Devin (25-0, 15 KOs) has already done his homework as far as Tank’s fighting style goes, and he likes his chances of beating him.

Mayweather Promotions might not be as keen on letting Tank fight Haney, though, because they’d lose a lot if he beats him.