Spence vs. Crawford: Does Terence deserve the lion’s share at 60-40? 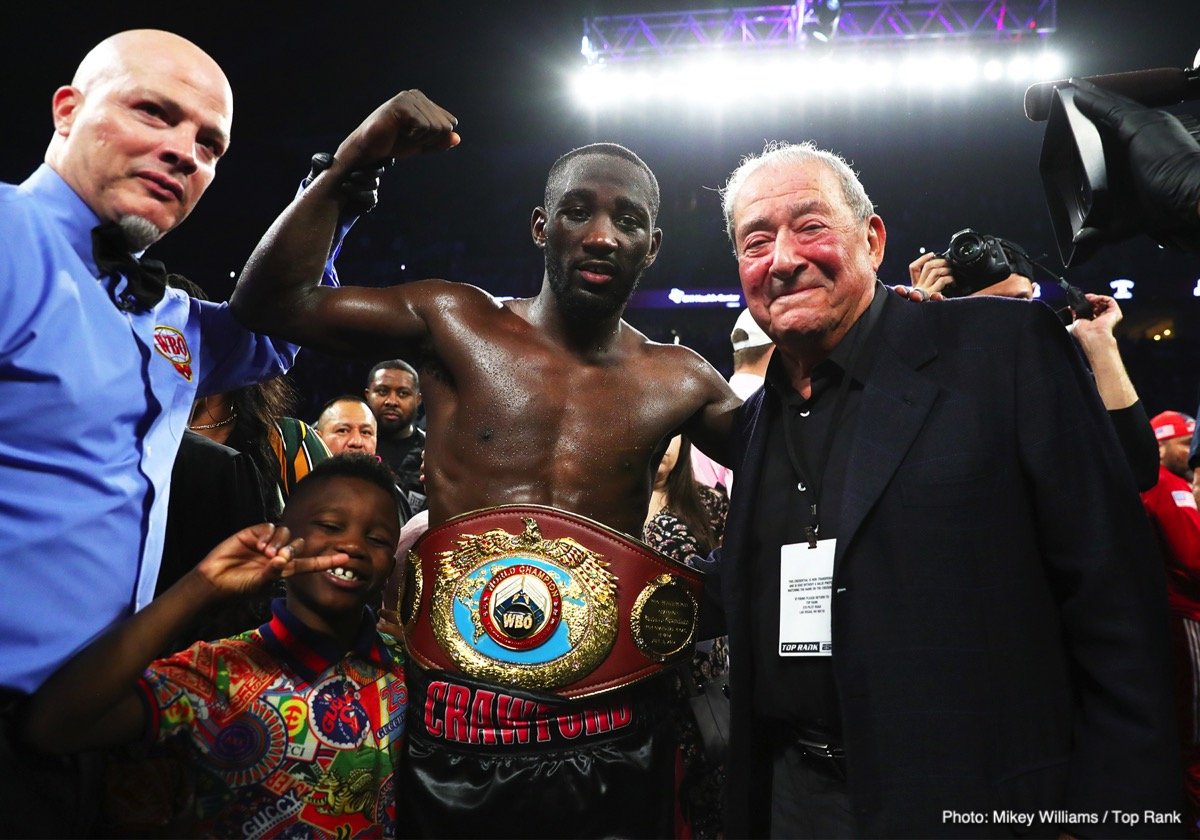 By Chris Williams: Terence Crawford is having a hard time accepting that he doesn’t have the cache to get the purse split that he wishes he could get for a unification fight against IBF/WBC welterweight champion Errol ‘The Truth’ Spence Jr.

Crawford had recently talked of wanting a 50-50 split with Spence, but now the Top Rank fighter is asking for a 60-40 split in his favor.

Talk about tipping things upside down. If Crawford was the pay-per-view attraction and the guy with all the great names on his resume, 60-40 in his favor would make sense.

By asking for that kind of a split, Crawford is either letting Spence that he’s not interested in the fight or he’s hoping that he’s foolish enough to give it to him.

Chris Williams sees it more of the latter. I think Crawford is counting on Spence being gullible and agreeing to meet him down the middle at 50-50.

Crawford starting high with the split in his favor is room for him to get the split that he’s likely hoping to get at 50-50, which you can argue is 20% better than what he deserves.

And they said it was me 🤷🏿‍♂️ I rest my case now, on to the next. That chapter is now close.

See what I mean. Crawford isn’t accepting the reality of his B-side status very well, is he? If you’re Spence, you need to let Crawford know that you can make the same money fighting other guys as you can against him, and he’s not worth fighting until he’s going to agree to a 70-30 split. 60-40 would be a gift to Crawford because he doesn’t rate that large of a split.

Look Crawford’s last 10 opponents and judge for youself if he deserves a 60-40 split with Spence:

Those aren’t talented fighters, none of them, and it’s laughable that Crawford wants a 60-40 split in his favor. Like Chris Williams is saying, 60-40 in Spence’s favor is way too high for Crawford. If you’re Spence’s manager, you got to be thinking 70-30 or 75-25.

Personally, 75-25 is about as much as Crawford deserves because he’s not a pay-per-view attraction and he won’t contribute much in promoting the fight.

If Spence fights Crawford, all the heavy lifting will be done on Errol’s part in giving all the interesting interviews and talking on social media. Bob Arum and all the ESPN commentators would be the one doing the hard work to try get boxing fans interested in seeing Crawford and Spence.

It’s so tilted in Spence’s favor that it’s embarrassing even to compare the options between him and Crawford.

Some boxing fans naively believe that Crawford will be able to improve his future negotiating muscle by leaving Top Rank and signing with Matchroom or PBC, but that’s not going to change anything.

Nothing will change if Crawford signs with PBC

Crawford going from Top Rank to another promotional company is like him changing his shoes. It’s not going to make Crawford popular with the casual boxing fans by changing promoters.

For the fans who think Crawford will become a superstar by going over to PBC, they’re totally misguided and dreaming.

Crawford’s lack of popularity isn’t because of his resume, which is filled with fluff. Crawford doesn’t have an exciting style, and he further hurts his popularity by not having anything to say when marketing his fights.

Teofimo Lopez is arguably the best in boxing at marketing his fights with his trash talking. He’s like the Conor McGregor of boxing when it comes to building interest in his matches.

Crawford is the complete opposite of Teofimo with his ability to get fans interested in his fights. So when you put Crawford’s boring switch-hitting, counter-punching fighting style together with his ho-hum style of marketing his fights, you’re left with a guy that puts fans asleep.

Crawford is like another Devin Haney and Shakur Stevenson, putting fans to sleep both inside and outside of the ring. Those guys are too boring to become stars.

At this point, given Crawford’s lack of success with his pay-per-view attempts and his empty resume, 70-30 is arguably as good as it gets for him.

If you’re Crawford, you should take that deal while you still can because it’s going to keep moving and wind up soon at 80-20, especially after Spence faces Canelo Alvarez beats the popular Mexican star.

Spence: Crawford will have to take what we give him

Last Saturday, Spence (27-0, 21 KOs) made it known that all he’s willing to offer WBO belt-holder Crawford (37-0, 28 KOs) is either a 60-40 or 70-30 split. The latter number is indicative of the widening between them in terms of popularity and achievement.

With Spence’s options that he has on the table for fights against Manny Pacquiao, Canelo Alvarez, and Keith Thurman, it would be a waste of time offering Crawford more than a 75/25 split.

Once Spence fights all those guys, 80-20 or 90-10 would be the type of split that Crawford would deserve.

The 60-40 split that in Spence’s favor that he previously was offering to Crawford is way too high right now. Crawford is doing nothing with his career, fighting no names like Egidijus Kavaliauskas, and shot fighters like Amir Khan and Kell Brook.

It wouldn’t be surprising if Crawford didn’t even get a 50-50 split for his fight against Amir Khan in 2019. That was the fight where Crawford hit Khan low when things going well for him.

Khan was so badly hurt from the low blow that the fight had to be halted. It’s unclear if that was intentional on Crawford’s part or not, but if it was, it blew up in his face because he looked bad winning the ight that way.

Adrien Broner training for a fight in early 2021 »