Shakan Pitters vs Craig Richards On Dec. 18, Live on Channel 5 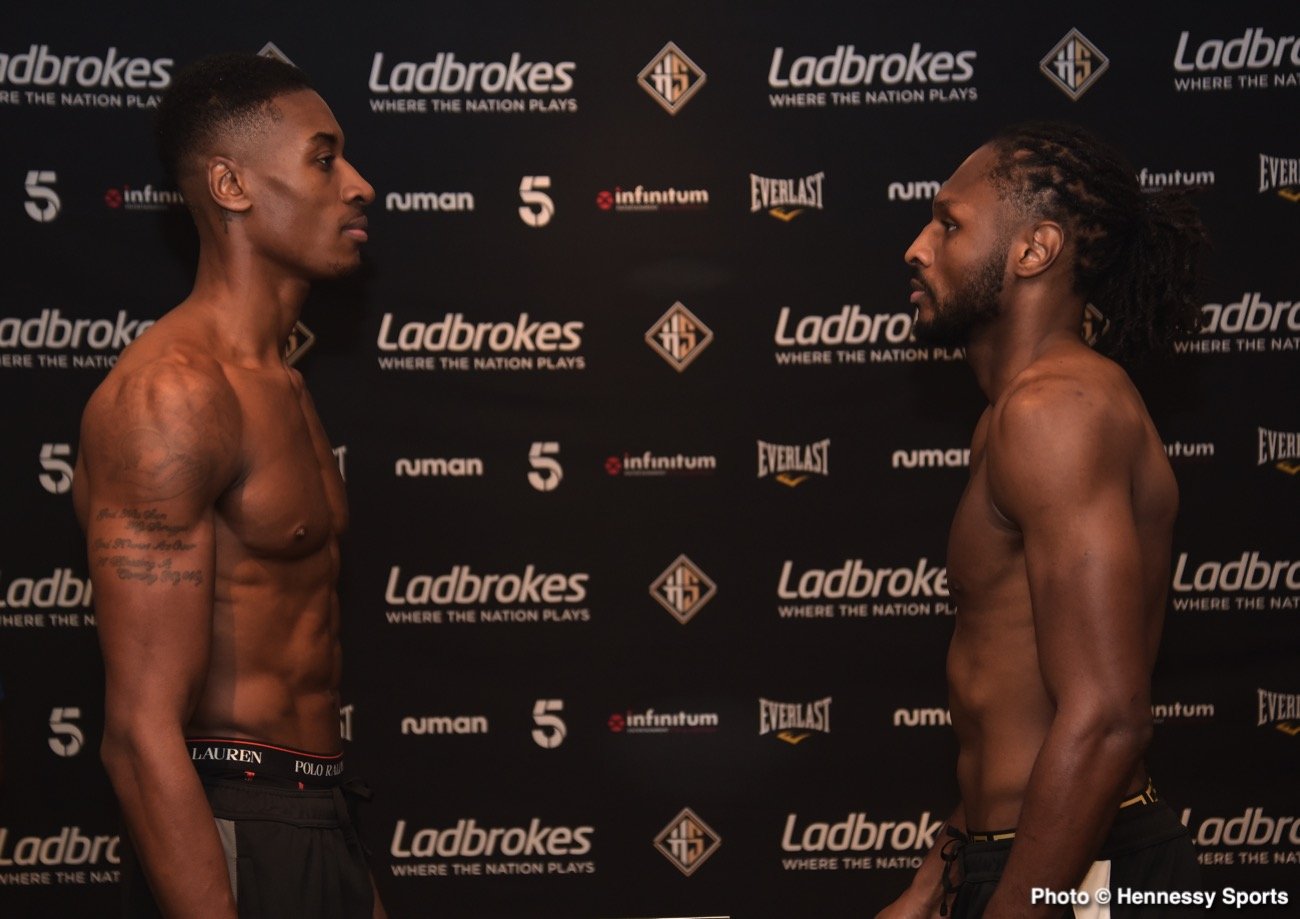 Promoter Mick Hennessy is delighted to confirm that all the boxers’ featuring on his final event of the year tomorrow night (Friday 18 December) at the Fly By Nite TV studio in Redditch have all passed their COVID-19 tests and are cleared to fight.

Since the recommencement of boxing shows behind closed doors in August, Hennessy will now have successfully staged four TV studio shows and due to the strict shielding policies enforced in the build up, is proud that none of the boxers featuring on any of his shows have tested positive COVID-19.

The boxers’ weighed in today, with the main event, the British Light-Heavyweight Championship between Champion Shakan Pitters and Challenger Craig Richards, both coming in just under the 12st 7lb (175lbs) limit before they collide tomorrow night, exclusively LIVE and FREE on Channel 5 in the UK.

Pitters, who weighed 12st 6lb 2oz (174lb 2oz), said, “I’m ready to rock and roll. I hit the weight easy and feel good and strong. Now it’s just ticking down until tomorrow and Richards will find out he’s out of his depth for all the rubbish he’s been talking.”

All the weights from today’s weigh-in at the Holiday Inn, Redditch

British Light-Heavyweight title contender Craig Richards styles himself as the ‘Spider’ but champion Shakan Pitters is threatening to snare him in his web then flush him down the pan when the fierce rivals collide for the title, exclusively live on free-to-air Channel 5, on Friday 18th December.

‘I’ve watched Richards many times and he’s so deluded, talks like he’s better than he is, and I’m looking forward to setting the record straight,’ says the 6ft 6in Brummie who is now unbeaten in 14 after collecting his crown with a comprehensive 12 round decision over Newark’s Chad Sugden in August.

‘I’ve already sparred plenty better than him. It may sound horrible but I’m really not impressed. I don’t rate his game at all. ‘Spider’s’ not a force in this division.

‘He gets frustrated very easily. He’s certainly not going to be able to outbox me and, if he tries to walk me down, he’ll get his head panned. I bring excitement and I’ll be letting my hands go, bringing the heat.’

During the pre-fight battle of minds, south Londoner Richards, 15-1-1, has been quick to highlight that he holds a sizeable edge in experience (three more paid starts) and has tested his skills against significantly stiffer competition than the champion who has ventured beyond round six only twice.

And the once world rated ‘Spider’ man – who made an unsuccessful domestic title challenge to Frank Buglioni (LPTS12) on the undercard of the Joshua-Takem world heavyweight title blockbuster at Cardiff’s Millennium Stadium in 2017 – also casts dispersions on how Pitters could cope under the elevated spotlight of Channel 5 at the Fly By Nite studio in Redditch.

However, skyscraper Shak, 31, scoffs at these perceived shortcomings.

He stresses: ‘Sparring is the closest thing to actually fighting and I’ve had loads of experience of that with heavyweights and cruiserweights plus some real good spars with (2016 Olympic medallist and departing domestic champ) Joshua Buatsi. I do ten rounds comfortable in the gym so it really ain’t gonna be an issue.

“Besides, Dec Spelman (beaten for the English title in September 2019) questioned whether I’d be able to do 10 rounds. Dec’s very game and came determined to avenge his previous loss to me. The pace was very high but I knew my boxing would prevail.”

“I headlined the night I won the title and showed I’ve got the temperament. It’s Craig who can’t deal with pressure. He froze against Buglioni in Cardiff and, when he fluffed his way to a draw against Chad Sugden last time, he claims it was because he was focussing on fighting me. Embarrassing! He seems to have an excuse for everything.”

“He’ll soon discover I’m a naturally bigger man. I’m coming down from cruiser, he’s coming up from super-middle. I’m in the ring at about 13.5 and I see me hurting him, winning by stoppage or, at worse, by a massive margin on points. It ain’t gonna be close. He’s got very limited skills and I intend to spank him all over the ring. He’s getting shown up.”

Whoever prevails can contemplate future bonanza paydays against the likes of Anthony Yarde, Joshua Buatsi and Callum Johnson in what could blossom into a Golden Age for British light-heavies.

But sensible Shakan refuses to get ahead of himself, stating: “All I’ve got in my head is Craig Richards, 18th December, Redditch. I’ll not comment on anyone else until after that.”

“I’ll just focus on myself, what I can bring. Stuff Richards. I’ve had plenty of notice and I’ll push my body to the absolutely limit as I always do.”

“Mick Hennessy has obviously seen something in me to give me this chance and it’s good to be on board. I’m thrilled about the exposure that boxing on Channel Five will bring.”

“I’m very hard to beat. Trust me, Richards won’t ever have met anyone similar before. His spar mates won’t be able to mimic me.

‘I’ve got the heart, the grit and the skills. It’ll take something very special to beat me and Craig Richards certainly ain’t nothing special!”

It’s fair to say that leading light-heavyweights Craig ‘Spider’ Richards and Shakan Pitters don’t like each other, don’t rate each other!

Since first paired to punch it out for the British title earlier this year, the bitter rivals have been sniping at each other like a couple of famished pit bulls during a fiery build-up to their Channel 5 televised collision at the Fly By Nite Rehearsal Studios, Redditch, on Friday 18th December.

Latterly, 6ft 6in Midland man Pitters, undefeated in 14 starts, has publicly slaughtered his south London nemesis as a deluded, puffed up super-middle who is easily frustrated and crumbles under pressure when cast in the spotlight.

The ‘Spider’ man – thus named after a vanquished victim commented that he appeared to possess more than two arms! – unsurprisingly begs to differ.

‘I’d known Shakan for a while and everything was always cool. Then, from nowhere, as we both progressed, Shak started bad mouthing me on social, saying weird stuff that I was scared, ducking him….please!’ mocks the 30 year old Richards whose only reverse in 17 was a short-notice 12 round points loss to then British champ Frank Buglioni on an Anthony Joshua undercard at Cardiff’s Millennium Stadium in October 2017.

‘Shakan’s a clown. I saw him dropped by a real journeyman (Czech Jiri Svacina) earlier in his career. And he’s not dangerous, ain’t stopped anyone who wasn’t stopped about 20 times previously.

‘I don’t really care about him. Listen, in the past, they’ve all called me out. They all say a lot of things before the bell rings. Jake Ball was taller. He’d been at Team GB. No way could I outbox him. He had quicker hands, quicker feet……he was smashed in three!’

‘After I expose Pitters, he’ll have to go back to the drawing board just like all the others did. Afterwards, they all say: ‘I didn’t realise you were so strong, didn’t know you hit so hard.’ Shak’s in for a serious reality check.

‘Look, he’s ‘half’ decent. Half. He relies on his height and keeps running but there’s a lot of flaws. Everything he does is simple, basic, nothing I’ve not seen or faced before. There’s nothing unique about him. I’ve tall sparring partners who are exactly the same.

‘Him coming down from cruiser and me coming up from super-middle will work against him. I’m the more NATURAL light-heavy. I’ll have more energy. Besides, I mostly spar decent cruisers and always walk them down.’

To compensate for conceding physical advantages and home court, cruncher Craig (eight stoppage wins), holds a sizeable sway in ring experience over the reigning champion who acquired his crown with clear win over Newark’s Chad Sugden in August.

Though Richards’ CV lists just three extra fights, he has 24 more pro rounds on his slate. While Pitters has passed round six just twice, rugged Richards has the security of having completed the 12 round championship trip against both Buglioni and New Cross nugget Andre Sterling (dumped and decisioned in an eliminator), plus a further 10 in an early career Southern Area 12st win over Alan Higgins.

‘Shakan was hurt several times during his English title win with Dec Spelman. Unlike Pitters, I’ve been an underdog. I’ve been out of my depth. There’s a lot he’s still not been through. I know how to handle a crisis. He doesn’t,’ warns Richards.

‘I seriously don’t like six or eight round fights. Tens and 12s suit me more cos I can systematically break a fight down, control and maintain a pace that others can’t match. I finish stronger than I start, both in the gym and on fight night.’

And Richards openly scoffs at the suggestion that he caved under the weight of expectation, firstly against Buglioni, then again when held to an eight-round tie by Sugden in his title tune-up last December.

‘Look, I’ve been the co-main event before 10,000 at the O2 and won. I’ve boxed on AJ undercards, Golovkin undercards. Big fights, real pressure. Been there, done it,’ states Richards.

When judgement day arrives, the ‘Spider’ man predicts Pitters will suffer a severe case of arachnophobia; tangled in his web, then ruthlessly devoured.

‘There’s multiple factors as to why I beat him,’ he concludes.

‘I’ll not chase a stoppage but if the opportunity presents, I’ll get him out of there. I definitely have the artillery. I’m different calibre altogether!’


« Callum Smith is ready to shock the world