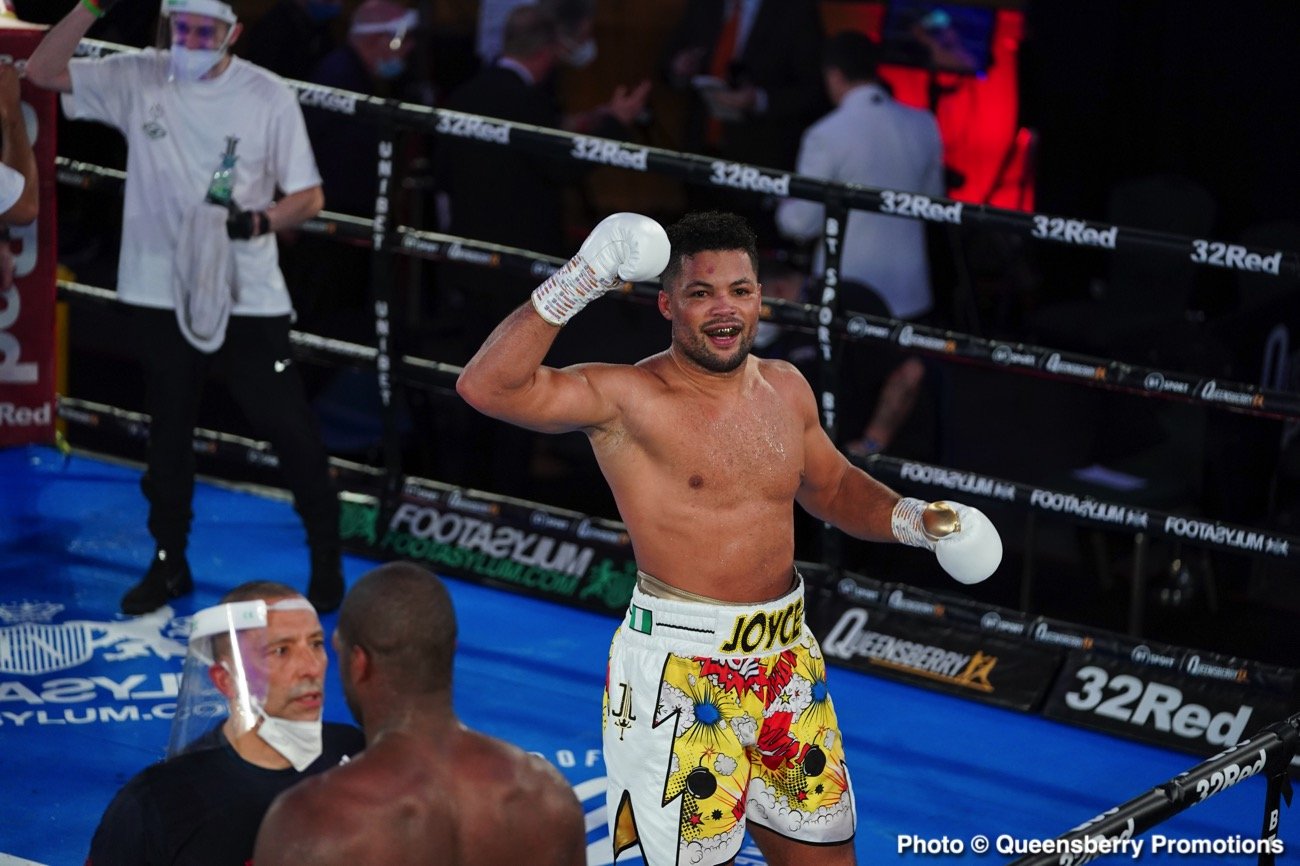 By Barry Holbrook: Joe Joyce’s manager Sam Jones wants #1 WBO heavyweight contender Oleksandr Usyk next for ‘The Juggernaut’ to either fight for the title or to be placed in a position to face the winner of the Anthony Joshua vs. Tyson Fury match.

Last Saturday, Joyce (12-0, 11 KOs) defeated Daniel Dubois (15-1, 14 KOs) in a tenth round knockout in London, England. The victory cleared the way for Joyce to take on Usyk for the WBO heavyweight title potentially.

Jones reveals that as a fan, he’d like to see IBF/WBA/WBO heavyweight champion Joshua face WBC champ Fury and then take on the Usyk vs. Joyce clash winner.

Joshua needs to make a decision

Having that title on the line would make the Usyk-Joyce fight bigger, and it put the winner in a better position to negotiate a match against the Joshua-Fury winner in 2022.

The World Boxing Organization hasn’t said whether they’d allow Joshua to steer around Usyk in 2021 to face Fury for the undisputed championship. If they do, it’ll be interesting to see if Usyk chooses to face Joyce. 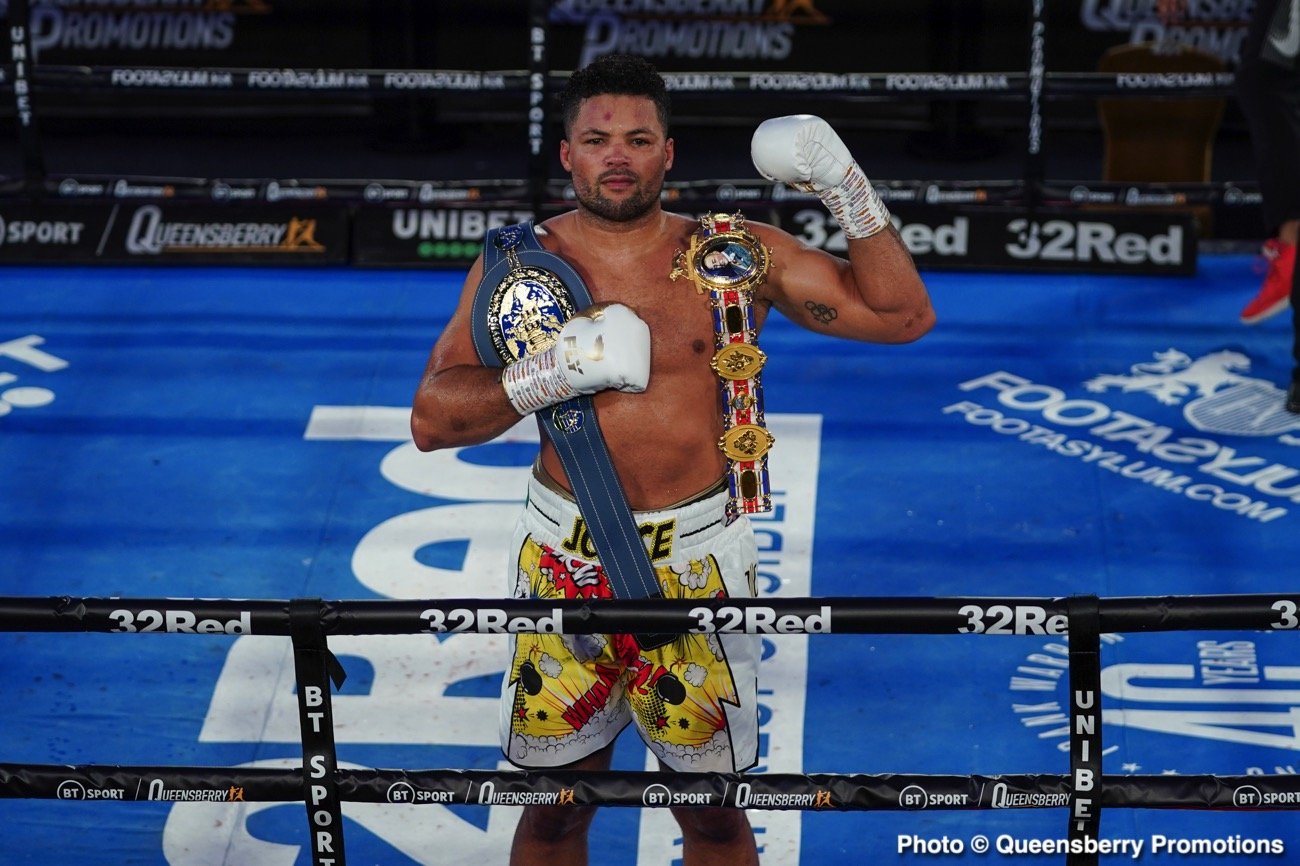 The WBO won’t order Usyk to take the fight with Joyce, as the Ukrainian fighter is already the WBO mandatory. He can’t be ordered to jump through another hoop to get his mandated title shot against the WBO champion Joshua.

If Joshua vacates his WBO to avoid facing Usyk, Joyce will be able to face Oleksandr for the vacated title. The WBO still needs to update their rankings. Currently, Daniel Dubois is still ranked #2 with the WBO and Joyce #11.

If the WBO moves Joyce into the #2 spot, he would be the one that takes on #1 Usyk for the vacant title. It’s possible that the WBO won’t push Joyce up to #2. They could rank him in the top five at #3, #4, or #5. If that’s the case, Usyk would be facing #3 WBO Joseph Parker for the vacant title instead of Joyce.

Former WBO heavyweight champion Joseph Parker’s manager David Higgins hopes that Joyce isn’t moved into the #2 spot with the WBO. That would mean his fighter would be the one that takes on Usyk for the vacated title if Joshua gives it up.

“If AJ vacates, we would love to fight Usyk for the vacant title and it’s a matter I’ve specifically discussed with [Usyk’s team] Egis Klimas and Alexander Krassyuk,” Higgins said to skysports.com.

“Frank [Warren] is Joe’s promoter, and we’ve told him we want big fights. We want the Usyk fight, and they’re going to get behind Joe,” said Joyce’s manager Sam Jones. 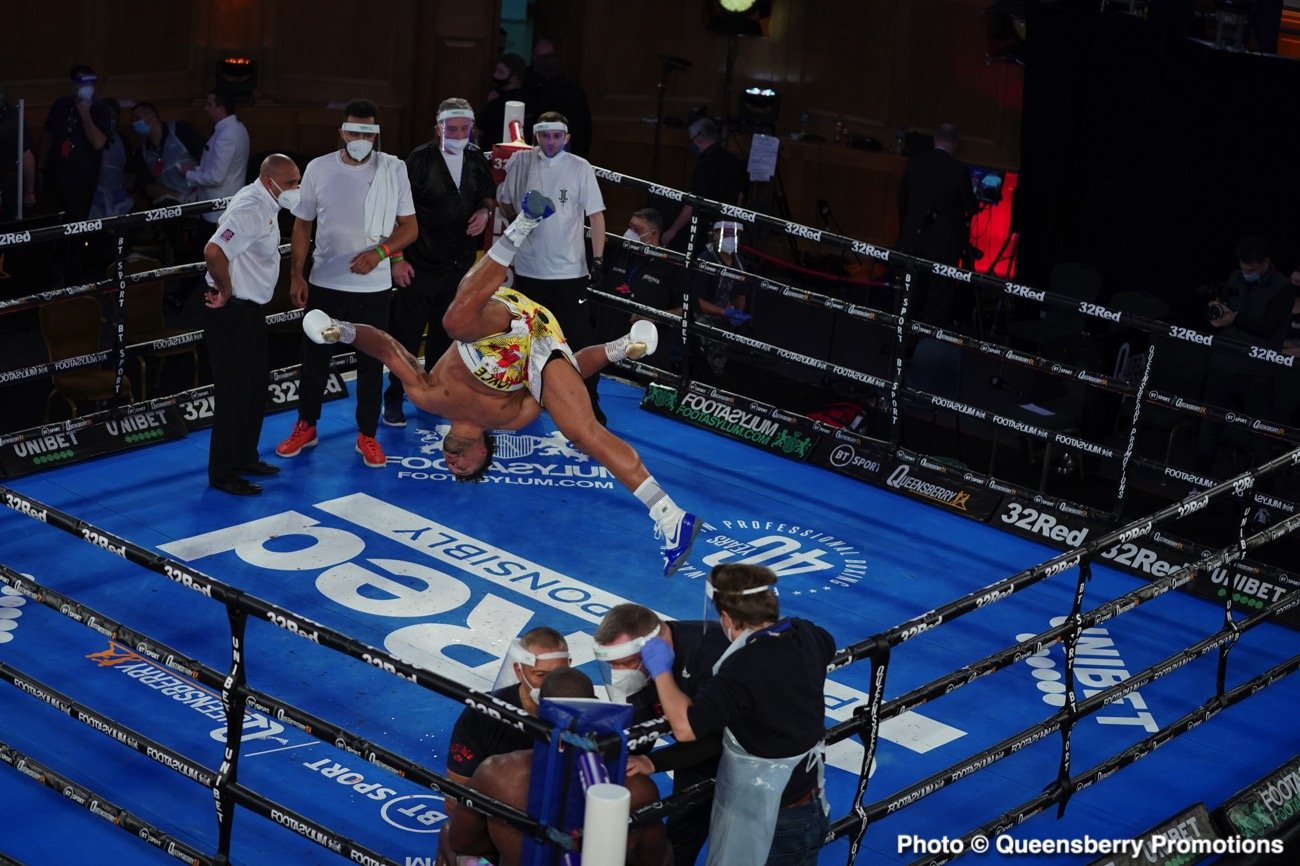 “I’m looking forward to speaking to Frank and getting Joe a world title fight against Oleksandr Usyk, which I think is a great fight for the fans. There was a small extension agreed [between Joyce and Warren] before the fight.

“Frank is going to deliver a world title fight for Joe Joyce. We can’t wait. Joe is rightfully in the driver’s seat now because he’s earned his stripes. All these people trying to protect their records, there has been none of that from Joe.

“We’ll sit down with Frank next week and see where we go,” said Jones on Warren, mapping out the next move for Joyce.

“As a boxing fan, you want to see Tyson Fury against Anthony Joshua because it’s the biggest fight in the world, isn’t it?

“I don’t care what belt’s on the line. I just want to see those two go at it and fight for heavyweight supremacy, and the winner fights the winner out of Joe and Usyk.

It’ll be up to Joshua and the WBO what happens next. If Joshua keeps his WBO title, he’ll likely be required to face Usyk in early 2021.

One can’t imagine the WBO putting Usyk on deep freeze for the entire year, making him wait until 2022 before he can fight for the strap.

Joe’s jabs did a lot of damage

“Taking 2,000 jabs to the face, Joe has done that to three people,” Jones said. “He did that to Ian, and he fractured Lewison’s orbital bone, [Bermane] Stiverne and now Daniel.

“It’s not a fluke what he’s doing. Daniel got that injury in the third round. He consistently had his face broken, and you can’t call him a coward.

“I would love to see him come back and prove people wrong and get behind him again. He’s still a name.

“I think the way the fight ended; I wish he’d been pulled out. It kind of took the glory off of Joe a bit because it was all about Dubois after the fight. ‘How is he going to come back? I can’t believe Dubois took a knee.’ Let’s give Joe credit now,” Jones said. 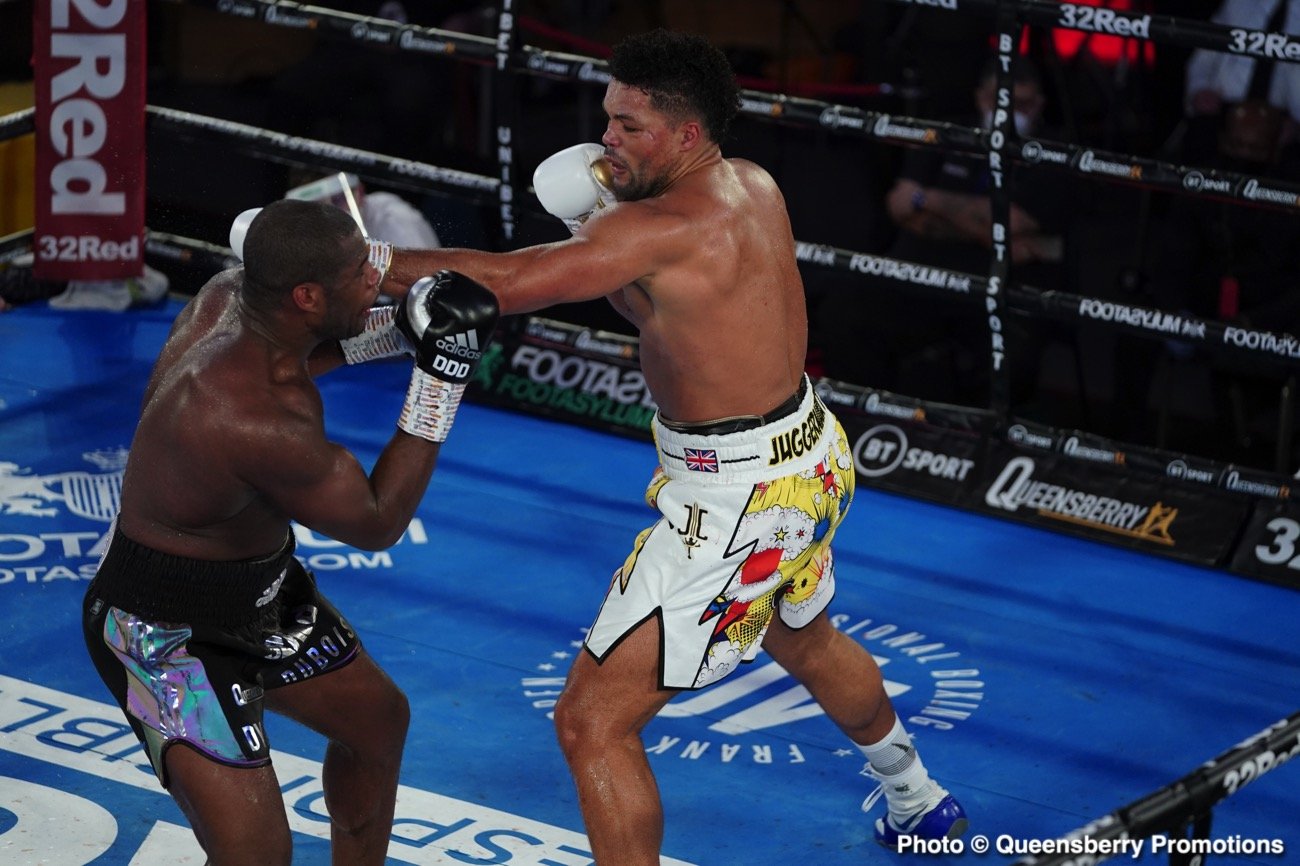 Getting hit repeatedly by the power jab that the 6’6″ Joyce throws was too much for Dubois to handle, and he was already having problems by the third round.

Jones talks about Joyce throwing tons of jabs, but he had already done the damage to Dubois’ face by the third.

In a rematch between Joyce and Oleksandr Usyk, Joe would be giving away a lot of speed against the 2012 Olympic gold medalist. However, Joyce’s size and power jab could make life difficult for Usyk on the night. This isn’t the 230-pound novice that Usyk beat in the World Series of Boxing in 2013.

Since then, Joyce has gained almost 30 pounds, weighing 258 lbs in his last fight, and he hits harder now. Back then, Joyce didn’t have a great jab, and he was mostly winging slow power shots that Usyk was able to avoid.

“Daniel, I think he needs a couple of fights to rebuild and get his confidence back,” Jones continued. “But after that, Daniel can be in some great fights himself.

“There’s the Gorman rematch because Nathan shouldn’t have been in that fight that night. 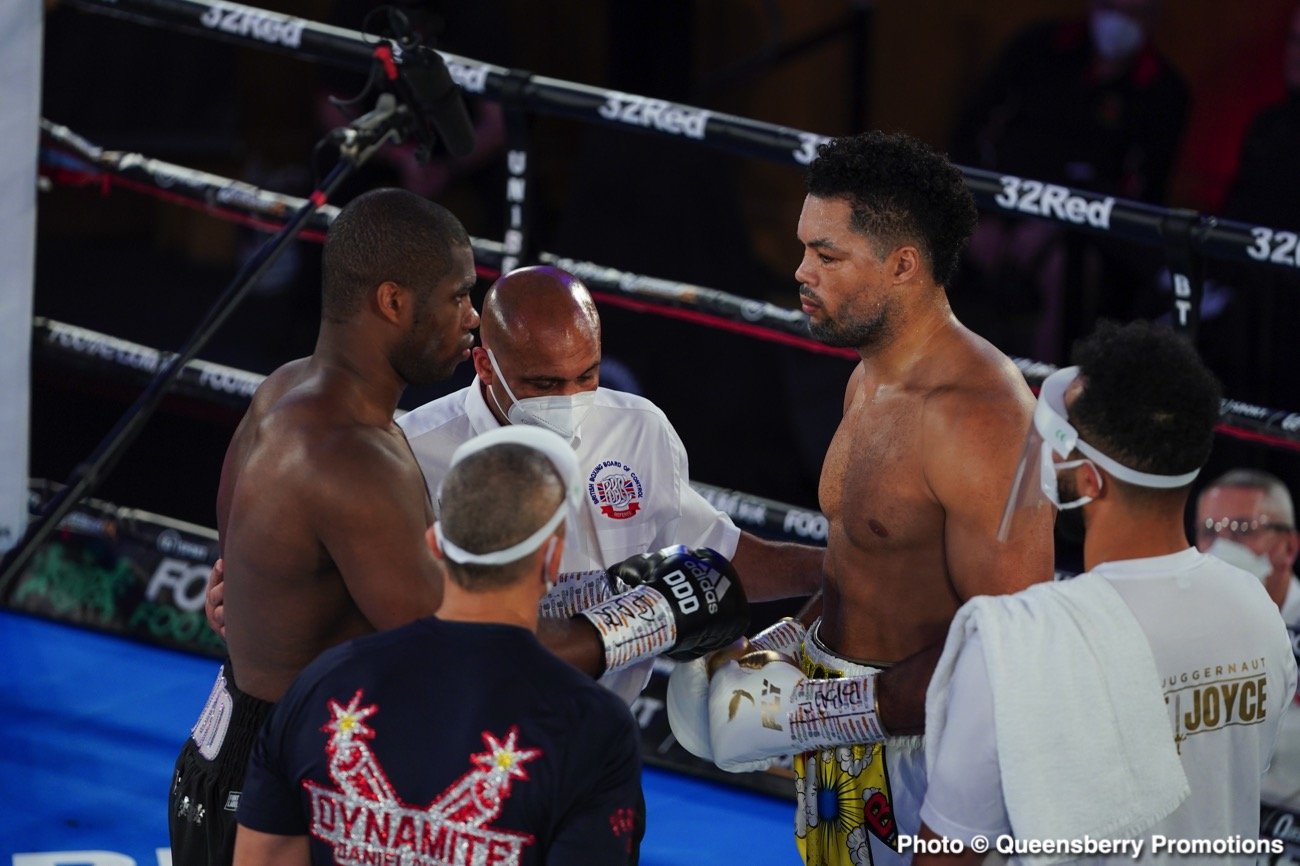 Fabio Wardley would be a dangerous opponent for Dubois to be facing in his first fight back after his injury, and it’s not likely that Warren would be in favor of this fight.

It’s very likely that when Dubois does come back, he’ll be matched against someone like Tom Little or some other light puncher that presents no threat to Dubois.

It’s going to be tough for the 23-year-old Dubois to come back from his loss to Joyce, and there may not be any coming back from this. There are unknowns about the damage that was done to Dubois’ eye in his loss to Joe.

Can Dubois come back to be the same fighter without suffering similar injuries? Also, will Dubois’s confidence be the same? Coming back from the kind of loss that Dubois suffered against Joyce may prove difficult.

But with Dubois’ power, size, and the skillful match-making done on his behalf by his promoter Warren, he should have a lot of success.

Now that Joyce has a jab, Usyk will have to pay the price whenever he attempts to get in punching range, and he could fall apart as Dubois did.

Usyk’s face was badly reddened and swollen after five rounds against Joyce in their five-round bout in the WSB in 2013. 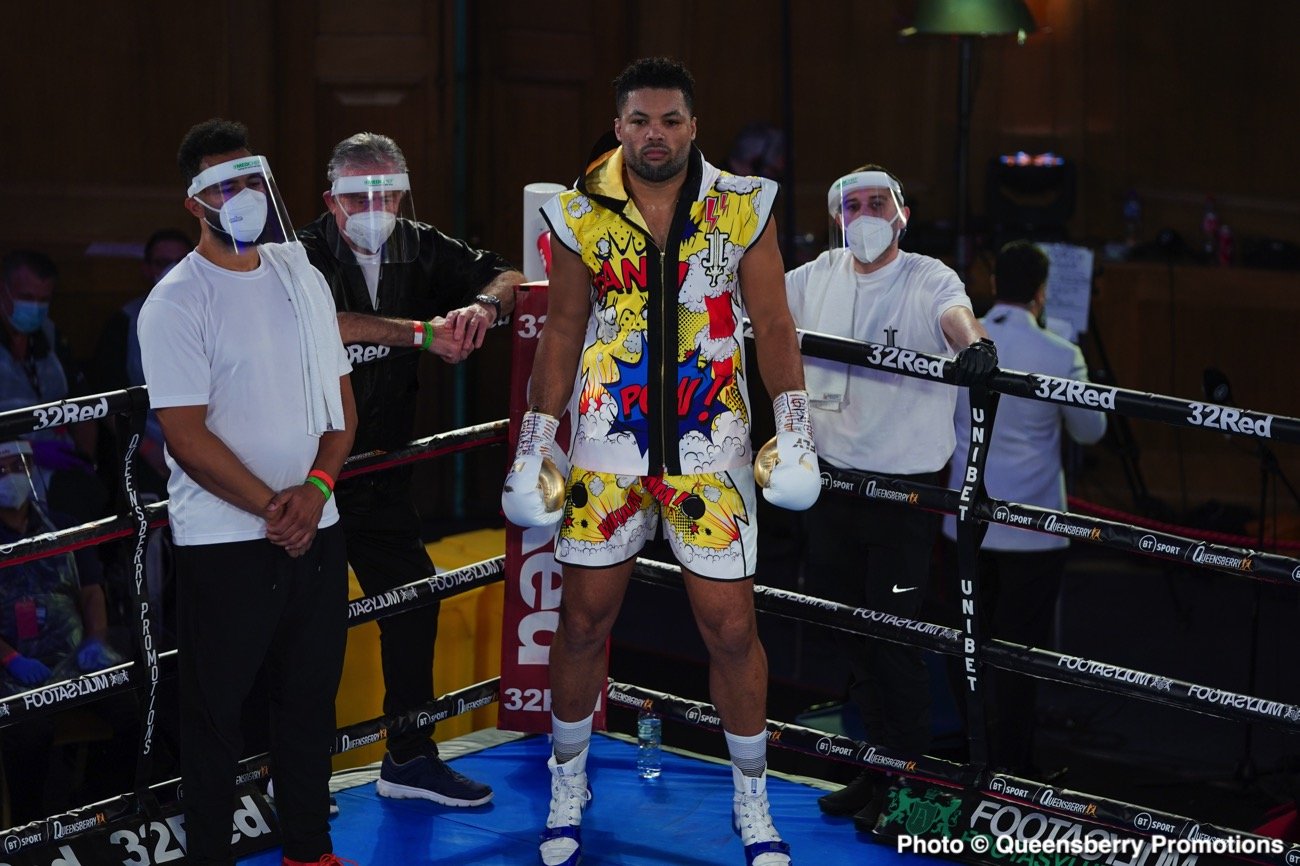 Just imagine what a bigger, stronger, and more experienced Joyce could do to Usyk now in a 12 round fight at heavyweight.


« Povetkin to decide soon on Whyte rematch on January 30th