Francesco Patera vs. Devis Boschiero on DAZN on Dec 17 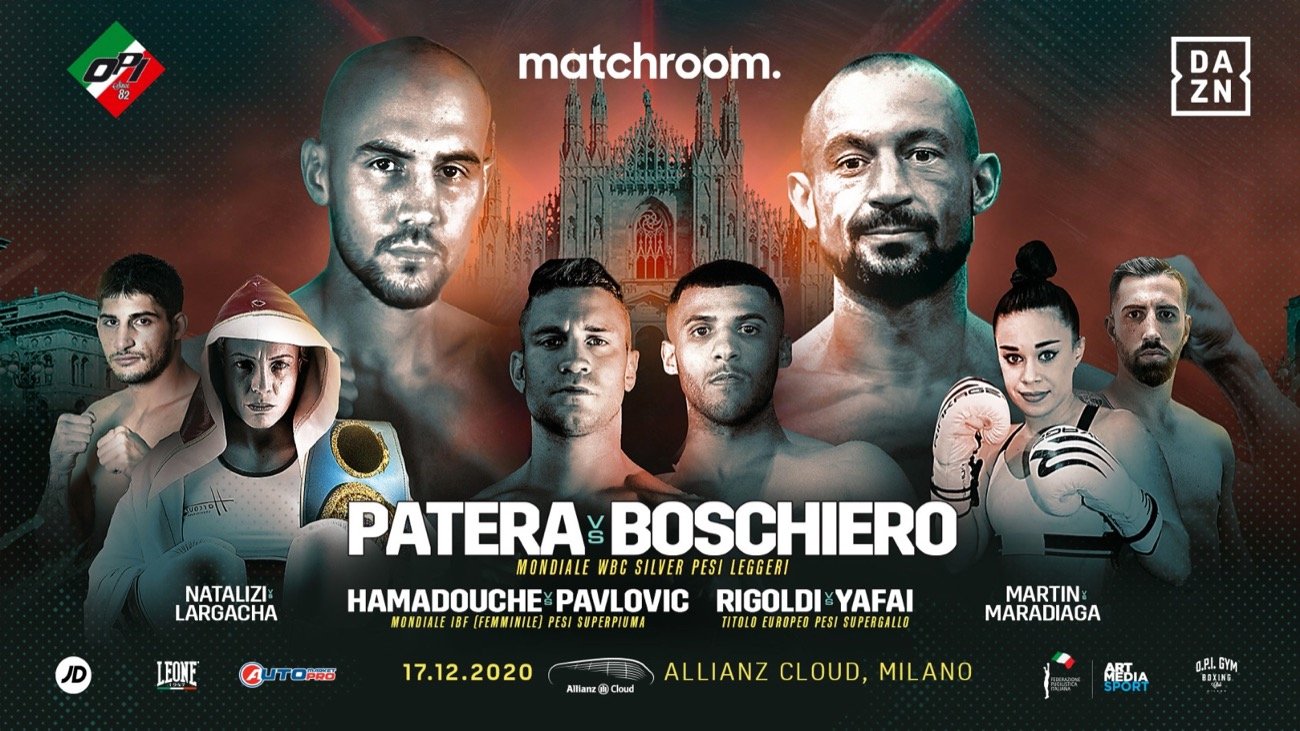 Matchroom Boxing Italy and OPI Since 82 will close out a difficult year in style with a stacked night of championship boxing on Thursday December 17 at the Allianz Cloud in Milan, with all of the action shown live on DAZN.

Matchroom Sport Managing Director Eddie Hearn said: “This is a stacked night of title action and I’m pleased to end a difficult and challenging year out in Italy on a high. Francesco Patera has been in red-hot form since he claimed the European Lightweight crown against Lewis Ritson back in 2018 and he’ll be knocking on the door for a World Title shot in the brilliant Lightweight division should he get past Boschiero.

“Gamal Yafai gets his European Title shot but faces a tough task against reigning champion Luca Rigoldi. It’s great to see our recent signings Maiva Hamadouche and Sandor Martin out so soon, there’s some huge fights out there for the both of them in 2021 if they win on December 17. Don’t miss any of the action on DAZN.”

Christian Cherchi of OPI Since 82 said: “We are delighted to close out this difficult year with one of our best shows to date since our launch with Matchroom Boxing Italy back in November 2018. Patera vs. Boschiero at the top of the bill is a great fight in a red-hot Lightweight division. There’s great title action from the top of the bill to the bottom with Luca Rigoldi defending his European Title against Gamal Yafai and Maiva Hamadouche defending her Super-Featherweight crown, plus Sandor Martin and Mirko Natalizi! Watch all of the action live on DAZN!”

Devis, are you ready to fight Francesco Patera?

“I’m more than ready, I’m in top shape! I have been training for the past 2 months and I have watched Patera’s fights on You Tube. Usually I don’t watch my opponent’s fights, I leave that job to my coach Gino Freo who then elaborates the right strategy to win. Patera is a skilled technician, very accurate when he throws punches, but lacks the power to win inside the distance. I had great sparring sessions with the current European super bantamweight champion Luca Rigoldi, we train at the same gym. I also had a sparring partner who is quite similar to Patera.”

Did you have problems making the weight?

“I never had problems when I fought at super featherweight, I don’t have them now at lightweight. As I said, I’m in top shape.”

“I will give 100% as usual. I want to become WBC” Silver lightweight champion.”

Francesco Patera: “Devis Boschiero is a fighter, but I’m ready for him!”

“Yes, I know well his fighting style: Boschiero is a fighter who throws a lot of punches from the start to the last second of the last round and I know he will do the same with me. I’m ready to fight him because I trained very well at GMG gym in Liegi where I have been training for the last 14 years. For this fight, I also trained in Bruxelles. As usual, my coach is my brother Biagio who was a professional light heavyweight from 2005 to 2007.”

Did you already make the weight?

“Lightweight is my natural division and I eat the right way. Therefore I never had problems making the weight.”

If you become WBC Silver champion, you will be ranked high by the WBC. Who would you like to fight?

“My dream is to become world champion and therefore I would like to fight Devin Haney. I saw his fights and I think that his style is perfect for me. I would also like to challenge Teofimo Lopez because he defeated the great Vasyl Lomachenko for the franchise title and that makes Lopez the best lightweight in the world considering all the titles. I would consider an honor to fight Lomachenko.”

You were born in Belgium from an Italian father. Do you consider yourself Italian?

“My mother Antonia has also Italian ancestry. She was born in Belgium, but her family is from Sardinia and Abruzzo. My father Fortunato Antonio was born in Aradeo, in Puglia. Me and Biagio learned Italian language from our parents and we speak it well. So, yes: we feel Italians. By the way, my father had a passion for boxing and trained in a gym regularly. He never turned professional, but he made me and Biagio love boxing too.”