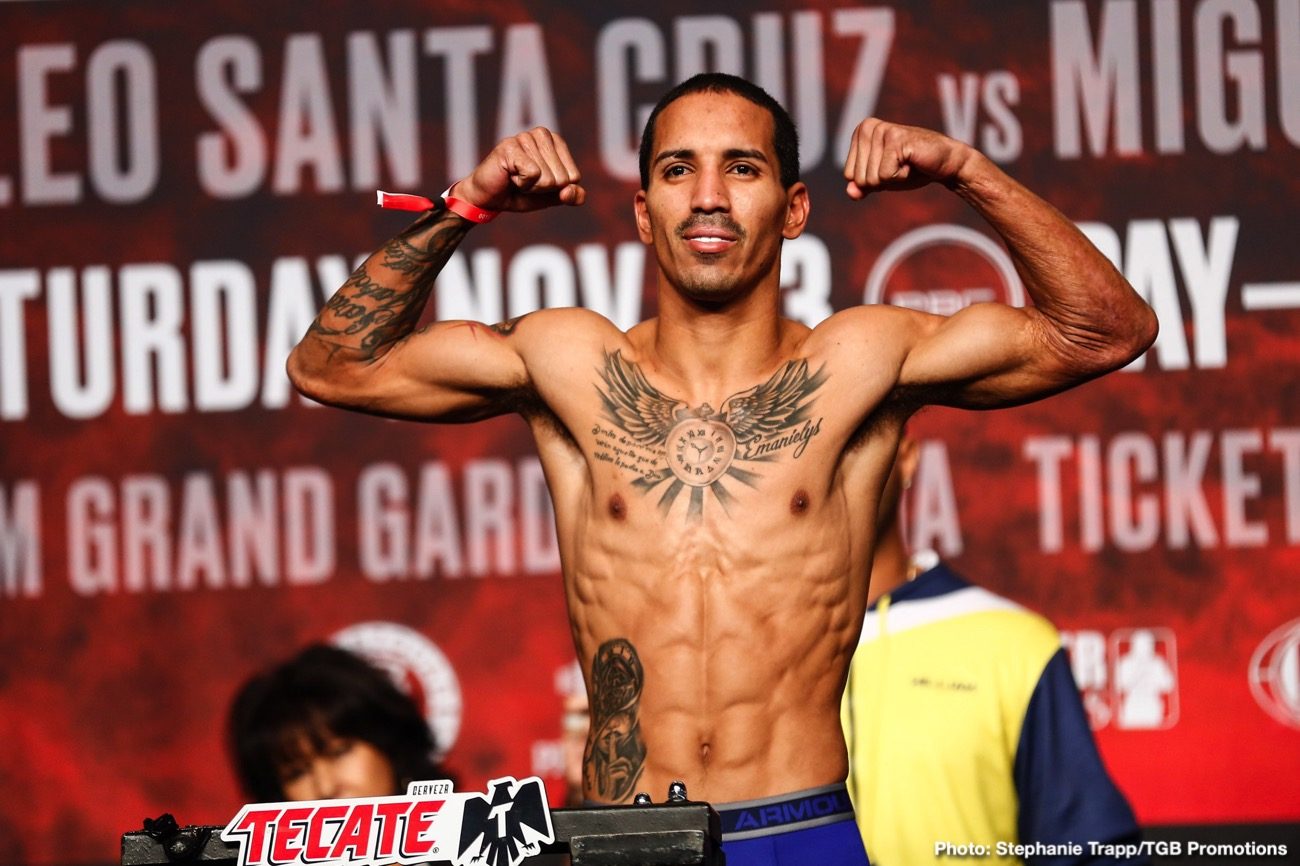 The action-packed tripleheader will feature unbeaten welterweight Jaron “Boots” Ennis taking on his toughest opponent to date in veteran contender Chris Van Heerden in a 12-round co-main event for the vacant IBO welterweight title. Plus, unbeaten bantamweight Antonio Russell will face former world champion Juan Carlos Payano in a 10-round showdown to kick off the telecast.

Nordine Oubaali and Nonito Donaire were originally set to meet for Oubaali’s WBC title before the fighters tested positive for COVID-19. At that point, the Rodríguez vs. Gaballo fight was made for the vacant interim title.

“Emmanuel Rodríguez will seek to grab a second bantamweight title on December 19, but will have a hungry and dangerous fighter in the unbeaten Reymart Gaballo standing in his way,” said Tom Brown, President of TGB Promotions.

“With the vacant interim WBC title on the line, expect both fighters to leave it all in the ring to claim this belt. Adding in the always exciting Jaron Ennis against Chris Van Heerden, and an intriguing clash between Antonio Russell and Juan Carlos Payano, and December 19 shapes up to be a stacked night from start to finish live on SHOWTIME.” 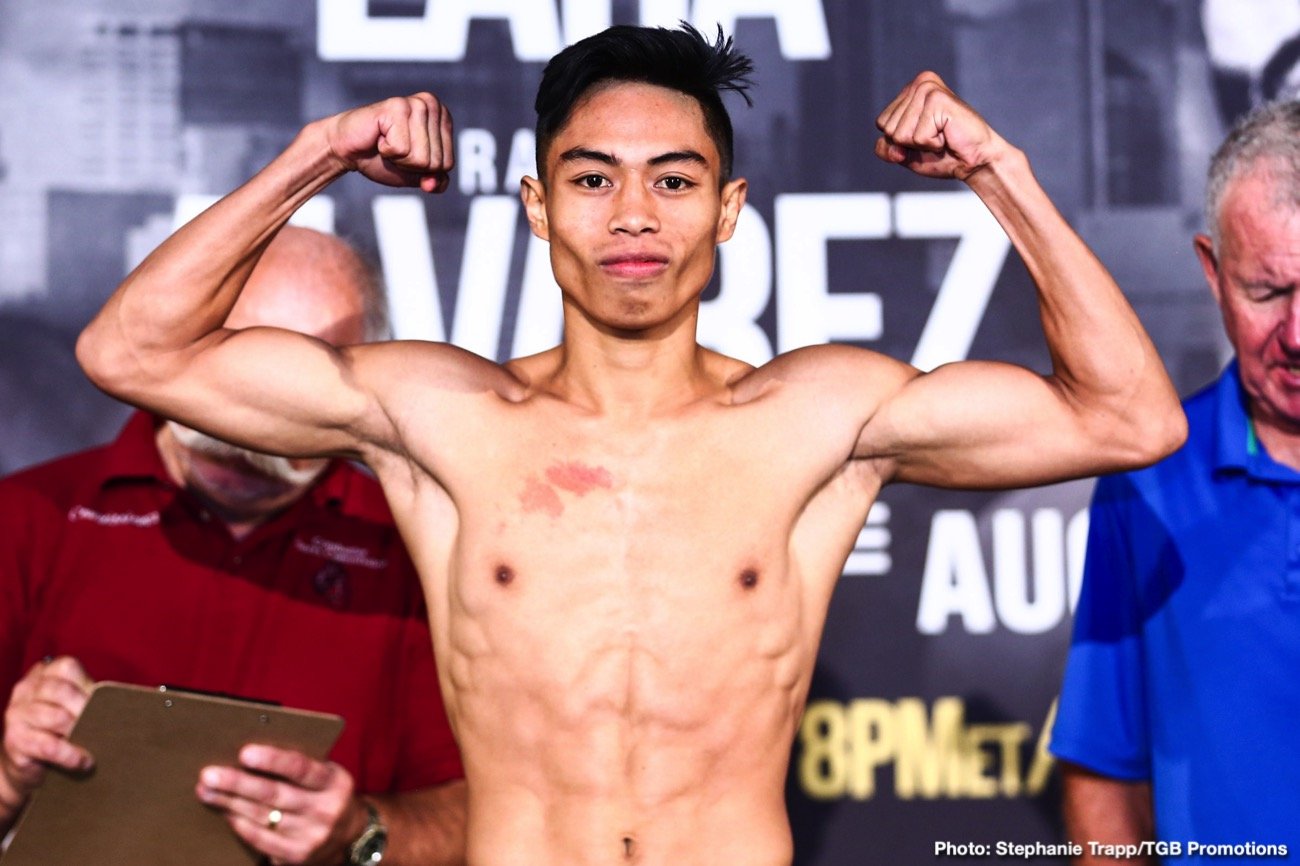 The 28-year-old Rodríguez (19-1, 12 KOs) will look to capture a second bantamweight title with a victory on December 19. Fighting out of Manati, Puerto Rico, Rodríguez won the IBF Bantamweight World Title with a unanimous decision victory over Paul Butler in 2018 and successfully defended it against then-unbeaten Jason Moloney. Unbeaten champion Naoya Inoue most recently stopped Rodríguez in their May 2019 title bout.

“This is a dream come true to have another chance to fight for the title,” said Rodríguez. “Even with the opponent change, I know it will be a tough challenge, but I’ve worked too hard and put in too much time in the gym to allow myself to lose this fight on December 19.”

Fighting out of General Santos City, Philippines, Gaballo (23-0, 20 KOs) enters this battle on a four-fight knockout streak and is unbeaten since turning pro in 2014. The 24-year-old’s most impressive victory came in March 2018, when he dropped then-undefeated Stephon Young on his way to a unanimous decision victory for the interim WBA bantamweight title.

The number one bantamweight in the WBA rankings, who also is ranked 12th by the WBO, Gaballo will fight in the U.S. for the fourth time on December 19, with his most recent stateside triumph coming by third-round stoppage over Yeison Vargas in August 2019.

“I’m very excited for this fight,” said Gaballo. “I can’t wait to step into the ring again. Since March, I’ve been training in Miami, and I’m planning to take advantage of this opportunity. I have an adamant opponent, but I’m going to show everyone what I can do and make sure I’m victorious.”

The New Generation in 2018 before adding two more KO wins to his ledger in 2019. As his level of opposition has steadily increased since turning professional in 2016, the switch-hitter has scored 16 consecutive knockouts in addition to notching 16 knockdowns in his last six bouts.

“I can’t wait to get in there to make a big statement,” said Ennis. “I am ready to show out and put on a crushing performance. This is one step closer to the bigger names and my world title shot.”

Originally from Johannesburg, South Africa, Van Heerden (28-2-1,12 KOs) now lives and trains out of Santa Monica, Calif. The 33-year-old has won five-straight bouts leading into December 19, including 2019 wins over Aslanbek Kozaev and Mahonri Montes. Since his first professional defeat in 2010, Van Heerden has won 14 of his 15 fights, with his only blemish coming in 2015 against unified welterweight champion Errol Spence Jr.

“Sometimes, it can take years for that one moment to come around and change your life,” said Van Heerden. “I have waited seven years for this opportunity to do my part and inspire my country of South Africa. Even with three weeks’ notice and coming in as the underdog, I am taking advantage of the opportunity that has been placed in front of me in these challenging times.

I’m a veteran and will use my experience to win this fight. Fighters fight. We need to be prepared to step in when the opportunity presents itself and seize the moment. I’ll be ready on December 19.”

The middle brother between WBC Featherweight Champion Gary Jr. and 2016 U.S. Olympian Gary Antuanne, Antonio Russell (17-0, 12 KOs) will return to action looking to cement his contender status in the bantamweight division. The 27-year-old from Capitol Heights, Md. turned pro in 2015 after an impressive amateur career. After four wins in 2019, Russell kicked off 2020, defeating Jesus Martinez in February.

“I’m ready for this fight,” said Russell. “We have been in the gym training hard despite the pandemic. I’m looking forward to getting back in the ring. We know our opponent is coming to fight, and so are we. I’m prepared for whatever he brings.”

Born in the Dominican Republic but now living and fighting out of Miami, Fla. Payano (21-4, 9 KOs) will move back down to bantamweight, where he was previously champion, after his most recent outing saw him drop a competitive decision against former champion Danny Roman in September.

Payano captured his title in 2014 by defeating Anselmo Moreno before splitting a pair of memorable fights against Rau’shee Warren. Payano has come up short in recent years against top fighters Luis Nery and Naoya Inoue while delivering Damien Vazquez his first career loss.

“I can’t wait to get back in the ring before the end of the year,” said Payano. “I’m excited for the opportunity on SHOWTIME against an undefeated bantamweight.

He’s never faced anyone like me, and I plan to test him from the opening bell and give the fans a great show. Uncasville, CT, and Mohegan Sun is a first-class city and venue. Thank you to PBC for giving me this opportunity.”

The 21-year-old Lee (20-0, 18 KOs) steps into the ring for the fourth time in 2020, having already delivered three knockout victories this year. Fighting out of La Quinta, Calif., Lee most recently dropped Jimmy Williams three times on his way to a first-round knockout in October. Lee enters this fight having stopped his last 11 opponents inside of the distance.

Representing his native Buckhannon, W. Va., Linger (12-4-2, 8 KOs) has proved to be a durable challenge in his pro career that dates back to 2015. The 26-year-old was 2-2 from January 2019 to January 2020, with his losses coming by narrow majority decisions against Maurice Lee and Nelson Hampton. Most recently, Linger lost an eight-round decision to unbeaten prospect Omar Juarez in September.