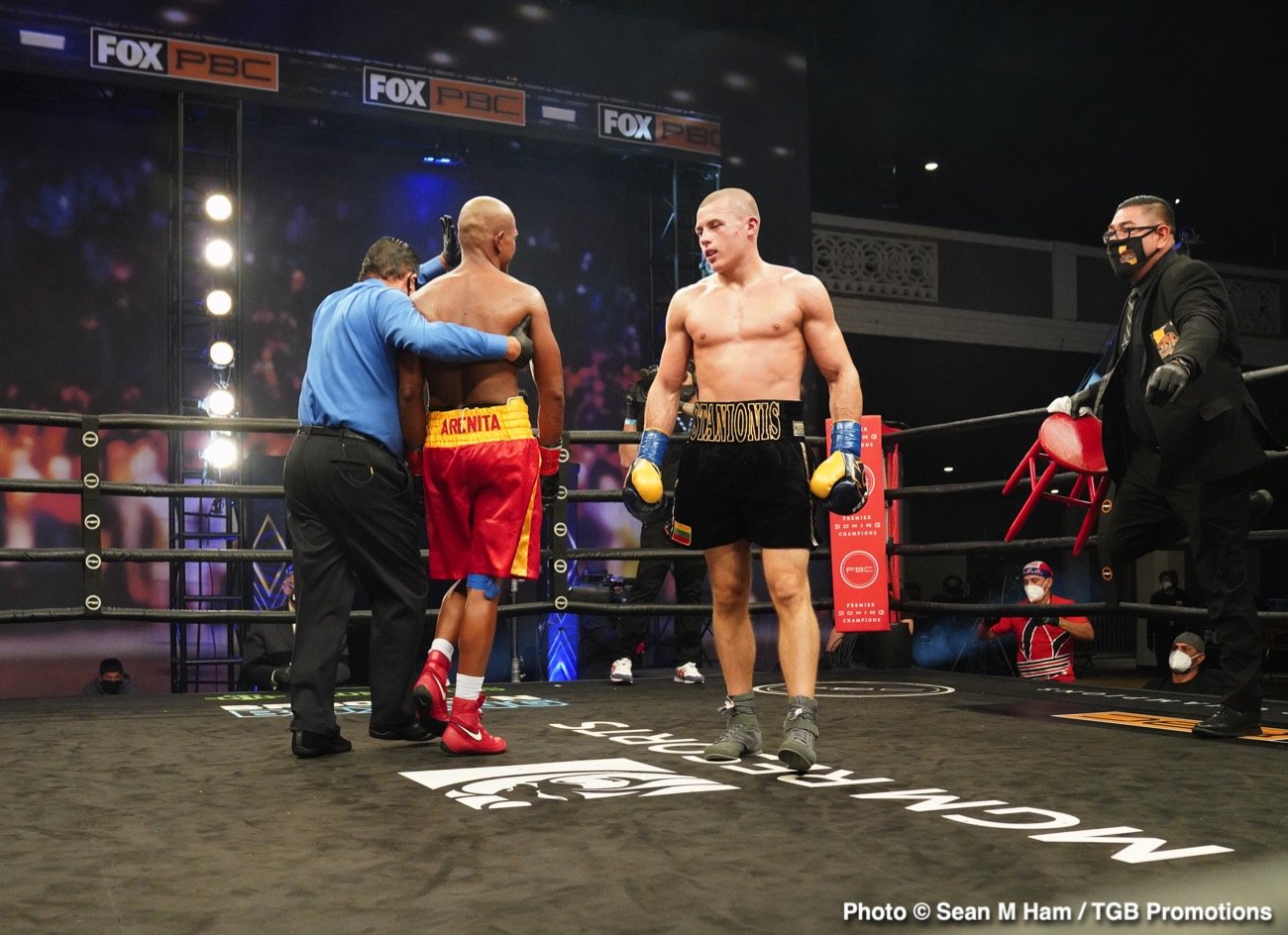 Undefeated rising welterweight Eimantas Stanionis continued his ascent up the 147-pound rankings Wednesday night with a ninth-round knockout of Colombia’s Janer Gonzalez in the main event of FS1 PBC Fight Night and on FOX Deportes from Shrine Auditorium and Expo Hall in Los Angeles. 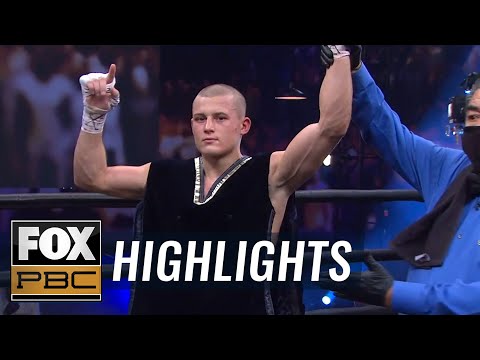 Unexpectedly, Gonzalez buckled Stanionis momentarily with a right hand early in round six, but rather than let him enjoy the moment, Stanionis responded with a thudding series of left hooks to the liver that put him back in control.

Two overhand rights and a big right uppercut put Gonzalez down for an eight count late in round eight and a crushing right hand early in round nine dropped Gonzalez again, prompting Referee Jerry Cantu to wave off the fight at :45.

With the emphatic finish, 26-year-old Stanionis won his fourth straight fight by knockout. He threw 517 punches and landed 207 for an impressive connect percentage of 40%, according to CompuBox. In losing bravely, Gonzalez threw 456 punches and landed 100.

Perez, a gym mate of four-division champion Leo Santa Cruzcame out busier and sharper in round one. Action really heated up in round two, as Garcia began coming forward with powerful hooks to the body and head, though Perez landed a strong right hand that stunned Garcia momentarily. The fighters reversed roles in round three, as a strong round by Perez was interrupted by a Garcia left hook that staggered him momentarily.

The high-contact action, scheduled for eight rounds, was cut short by a Perez left hook early in round four, as he rocked Garcia. With Garcia pinned against the ropes, Perez then unloaded a vicious barrage, culminated by a bomb of a right hand that dropped Garcia for the full count at :39.

Philippine Olympian Eumir Marcial (1-0) had a successful pro debut by scoring a four-round unanimous decision over Andrew Whitfield (3-2, 2 KOs) in their middleweight showdown.

Marcial, a native of Lunzuran, Zamboanga City, won every round against Whitfield, of Lewiston, Idaho, although each man landed their share of power shots.

The fight started quickly with the powerful Marcial standing his ground throwing left and right handed bombs while Whitfield answered in kind with a number of strong uppercuts of his own. Marcial started attacking to the body as well as the head in the second, slowing Whitfield’s momentum and nearly closing his right eye by the end of the round.

By electing to go toe-to-toe, Marcial, who qualified for the 2020 Olympics before it was postponed and won the silver medal at the 2019 AIBA World Boxing Championships, made for an exciting action fight. The scores were 40-36 according to all three judges. Marcial threw 310 punches and landed 120. Whitfield threw 273 and landed 46.

A pro for just over a year, Guadalajara, Jalisco, Mexico’s Molina showed impressive hand speed, nailing the rugged Alonso almost at will, while also highlighting his strong ability to move and avoid return fire. The Los Angeles native Alonso, who was riding a three-bout winning streak coming in, never stopped trying to pressure Molina and proved sturdy in making it through six rounds.

The event was promoted by TGB Promotions and took place without fans in attendance at the Shrine Auditorium and Expo Hall, an AEG venue, in downtown Los Angeles.


« Caleb Plant defends against Caleb Truax on Jan.30th on Fox

Callum Smith is ready to shock the world »