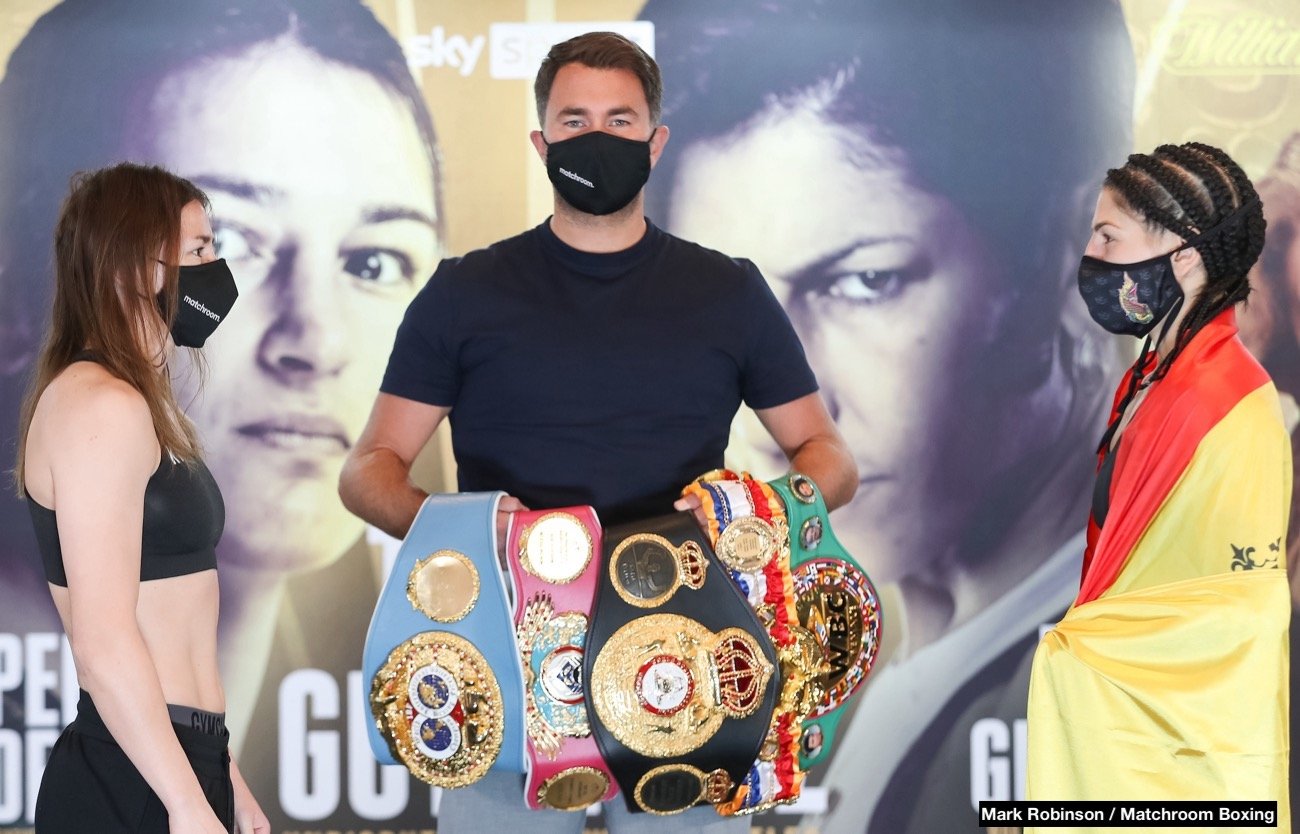 Sky Sports has announced it is making Saturday’s triple-header of women’s World Title fights available on YouTube, Facebook and skysports.com in the UK. The card will air in the United States on DAZN, as well as in all of the other eight DAZN territories.

Sky Sports has today announced that it will make this Saturday’s Fight Night boxing – including Undisputed Lightweight Champion Katie Taylor’s defence against Miriam Gutiérrez – available to all via multiple digital platforms.

Taylor’s Lightweight bout against Spaniard Gutiérrez – as well as Terri Harper’s WBC Super-Featherweight defence against Katharina Thanderz and Rachel Ball’s WBA Bantamweight Title fight with Jorgelina Guanini – will be available to Sky Sports customers and non-subscribers alike, this Saturday from 7pm on the broadcaster’s YouTube and Facebook channels as well as on www.skysports.com.

As part of Sky Sports’ commitment to women’s sport – first announced back in March – the move comes with the aim of ensuring elite women’s sport is more easily accessible to the public through both increasing its existing coverage and by strengthening its digital output.

Adam Smith,  Sky Sports  Head of Boxing Development  said:  “We’re delighted to be able to make Saturday’s triple-header of women’s World Title fights, a world first, available to a wider audience to showcase some of the brightest talents in the sport. We’ve been with Katie from the beginning of her journey and are proud to be a part of the boom we’re seeing in women’s boxing. Through live streaming the action, we are able to bring more boxing fans closer to the hard-hitting action than ever before with this world first.”

Eddie Hearn, Managing Director of Matchroom Sport said: “This is more ground-breaking news that helps us push women’s boxing to where it needs to be. The momentum of the last few years led by Katie Taylor has been special to watch but we have still got a long way to go. Nights like Saturday change the narrative of the sport, and as I have said before, it’s not men’s boxing and it’s not women’s boxing, it’s just boxing. Katie Taylor is a trailblazer and it is only right that she headlines this card on Saturday on a moment that we have all been working towards for a very long time. The key is to give these great fighters the platform to become stars and achieve their dreams. Without the support from Sky Sports this would not be possible and I’m so happy that so many people will be able to watch Saturday’s event.”

Norwegian Thanderz, who boasts an unbeaten professional record, became mandatory in November 2019 after claiming the interim WBC World Super Featherweight title with a points decision over Danila Ramos of Brazil.

Current champion Terri Harper caught the eye last time out, a pulsating 10-round split draw with Natasha Jonas saw the Doncaster fighter retain the titles that will now be on the line in the clash with Thanderz.

While respecting the potential in Harper, Thanderz believes she has the tools to perform on the night.

“It’s an amazing feeling to know that I’m finally fighting for the world title.

I’ve been waiting such a long time for this moment, and I know I’ll give my everything to win the title.

“Harper is a young and talented fighter. I think she’s a very hard working girl. She’s fast, she has a good technique, she has stamina, and she’s a very good fighter. It will be a pleasure to share the ring with her.

“I am confident I can beat her. I have a very good feeling, and I’m working very hard in my camp to be the best version of myself. I know it will be very difficult , especially because of the circumstances of the fight, but I’m prepared to surprise and shock everyone when I get the win.”

Fighting for the first time on British soil, Thanderz is positive and upbeat on her chances.

“I feel very good about fighting in the UK. I’ve never fought in England, so I can’t wait to have the experience of fighting in a complete new country with so many boxing fans.”

At 13-0 and 10-0-1 respectively, an unbeaten showdown between Thanderz and Harper is a mouthwatering prospect with the winner walking away with unified world champion status.

“This is the most excited I’ve been for a fight, I feel like I’ve got a lot to prove,” said Harper. “We’ve had the opportunity in this camp to work on lots of new things, having a strength and conditioning coach join the team. I want to go out and put the wrongs right.”

Promoter Nisse Sauerland backed his fighter to come away with the win, and believes it is the perfect time to introduce Thanderz to the British scene.

“Katharina brings that Viking power and warrior spirit, and it’s a good time for her to come up against elite opposition. She’s undefeated, the interim belt holder and following the trail set by Cecilia Brækhus in bringing a world title back to Norway.

She’s said herself she’s going for greatness and you can see it in the way she operates, we can’t wait!”

Eddie Hearn added “This is an historic moment. A huge night of boxing that will be headlined by not one but three women’s World Title fights. Katie Taylor has spun the game on its head since she turned pro and has paved the way for so many great female fighters.”

Liverpool Light-Heavyweight talent Thomas Whittaker-Hart has signed a multi-fight promotional deal with Eddie Hearn’s Matchroom Boxing and will face Bradford’s Jermaine Springer over eight rounds on Saturday November 14, live on Sky Sports in the UK and DAZN in the US.

Whittaker-Hart (4-0, 2 KOs), a former England and Team GB man who was planning on staying in the amateur game until the Tokyo Olympic Games, trains with Joe McNally at the Rotunda ABC in Kirkdale and has made a perfect start to life in the professional ranks.

The former English National titlist, who is managed by former WBC Cruiserweight World Champion Tony Bellew, made his pro debut on the Liam Smith vs. Sam Eggington show at the M&S Arena in March 2019, outpointing Poland’s Przemyslaw Binienda.

Three wins have followed for the 25-year-old prospect who will be looking to push on under his new promotional banner, starting with a win over Springer (7-1, 1 KO) next month on an historic World Title triple-header card.

“Tony phoned me a couple of days ago to tell me that I’m signing with Matchroom,” said Whittaker-Hart. “I was made up with the news! It’s the best promotional umbrella to be under at the minute so I was buzzing when I found out.

“I’m looking forward to performing on the biggest platform. I’m going to showcase what I know I can really do. I’m pleased that I’ve got the opportunity to be able to broadcast my skills to such a big audience on Sky Sports and DAZN.

“I’ve made a positive start to life in the pros with four wins and two knockouts. I don’t think I’ve showed enough of what I can really do. Now I’ve signed with Matchroom I can start to really push on and I know the opponents are going to get harder, that’s when you’ll see the best version of me.

“I don’t know a lot about Springer but I’ve seen the odd clip of him. I know that he’s a good step up for me at this stage of my career. I’m more than confident in my ability to get the job done and I’ll be more than ready on November 14. It’s a great show to be a part of.

“I want to keep on improving and going up the levels. I’m planning on getting to the top – that’s where I want to be. I couldn’t ask for much more with Tony managing me and Matchroom promoting me. Tony has helped me out a lot and he’s got me into a great position. He’s been there and done it so I look up to him massively.”

“I’m very excited about Thomas Whittaker-Hart!” said Bellew. “He’s been out the ring 12 months but I’m confident that within these next 12 months he will be in and amongst the top 3 domestically and ready for the British Title! He’s been working hard and has been sparring with renowned World Champions and vastly experienced fighters! The best is yet to come from Thomas.”

Big-punching Scot John Docherty says he will knockout Jack Cullen before the eighth round of their British Super-Middleweight Title Eliminator this Saturday November 14 at The SSE Arena, Wembley, shown live on Sky Sports and DAZN.

Docherty’s gym mate Felix Cash stopped Cullen in eight rounds to retain his Commonwealth Middleweight crown in a Fight of the Year contender at Manchester Arena last year, but ‘The Doc’ wants to go one better than Cash to secure bragging rights at the Matchroom Elite Boxing Gym.

“On paper Jack Cullen is my biggest test to date,” said Docherty. “I’m going in there to do a proper job on him. I’ve got to put the Super-Middleweight division on notice on Saturday night and I’ll be doing that.

“I’ll definitely be looking for the knockout and I’ll be going for it early doors. My gym mate Felix cash knocked him out in the eighth round when they fought last year, and I’ll be doing it much quicker than Felix.

“On Saturday night you’re going to see a big Super-Middleweight absolutely demolish Jack Cullen. I want to win the British Title and he’s in my way. You’re a sorry man if you’re in my way and he’s in for one hell of a night.

Cullen battled to a controversial split decision draw with Zak Chelli following a hard-fought encounter in Essex on the Matchroom Fight Camp finale earlier this year, but Docherty has no intention of leaving it to the judges as he looks to take a step closer to the British Title.

“He doesn’t bring anything different to the table each time he fights. He takes too many shots and he leaves himself open. Zak Chelli made him look very basic. I knew he was basic anyway, but he looked very bad in his last fight. No way it was a draw, he got beat fair and square.

“There won’t be any drama around the scorecards this time, I’ll be knocking him out. This isn’t going ten rounds. I’m ready to go now. I just want to get weighed in. I’ve had a good camp and I’m ready to unleash on Saturday night.”