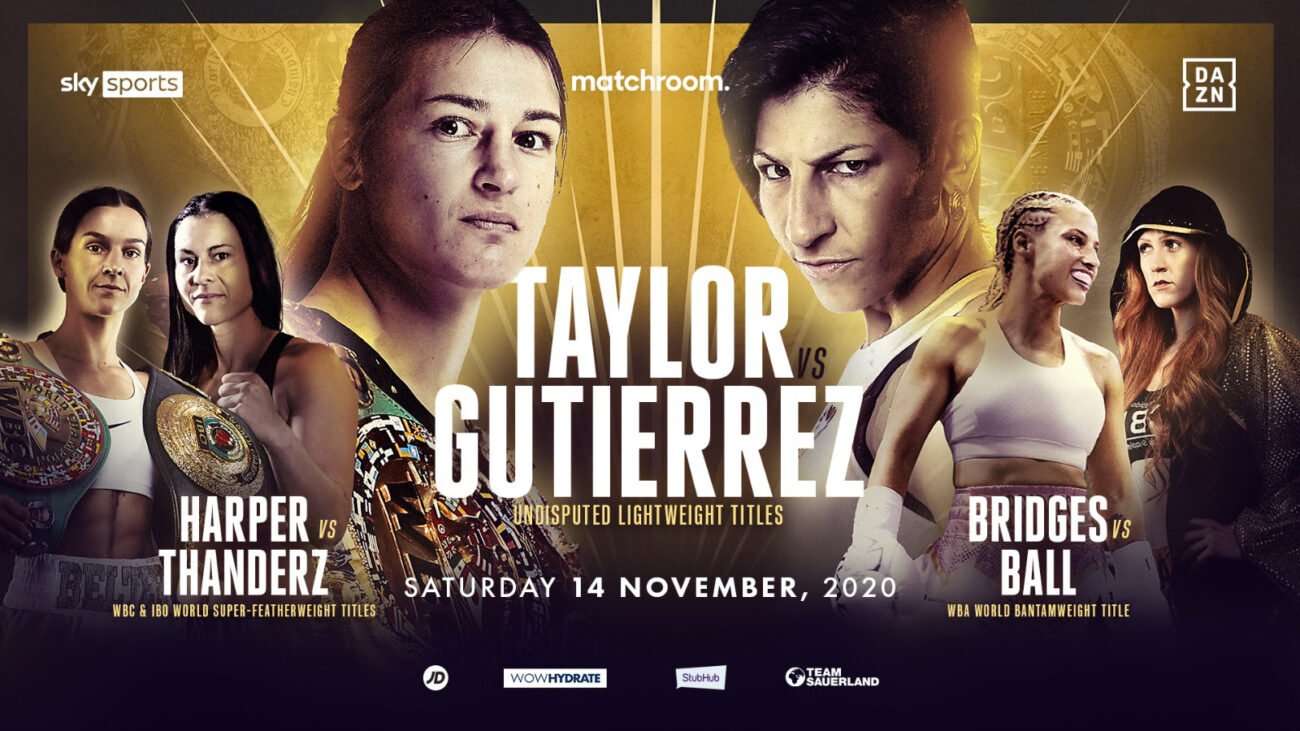 Matchroom will promote the first ever women’s World Title triple-header on Saturday November 14, with Katie Taylor, Terri Harper and Rachel Ball all starring in an historic evening of boxing shown live on Sky Sports in the UK and DAZN in the US.

Taylor (16-0, 6 KOs) retained her Undisputed Lightweight World Title with a unanimous decision win over Delfine Persoon as their highly anticipated rematch produced another brutal battle on the final weekend of Fight Camp in August.

The Irish star puts her World Titles on the line once more against Mandatory Challenger Miriam Gutierrez (13-0, 5 KOs), the undefeated Spaniard who has held the WBA’s Interim World Title since November 2019 following her win over Keren Batiz.

“I’m delighted to be headlining another fight night on Sky Sports,” said Taylor. “When I turned professional it was a bit of step into the unknown in terms of how it all would go so to have these opportunities to headline cards is something I never take for granted.

“It’s been a pretty quick turnaround from my last fight but I’m always looking towards the next challenge and I really wanted to fight again before the end of the year. The pandemic has obviously made it a very uncertain time in terms of scheduling fights so I’m really excited to have a date to focus on.

“I’m expecting a very tough fight against an undefeated challenger, but I’ve been back in training camp in the US for the past couple of weeks and I’m looking forward to successfully defending my titles on November 14.”

“I am very happy, eager and excited,” said Gutierrez. “I am preparing myself 100% for this fight with Katie. This is the great challenge that I have pursued in my sports career, to be able to fight for the undisputed crown.”

Denaby’s Harper (10-0-1, 5 KOs) retained her WBC and IBO Super-Featherweight World Titles with a thrilling split decision draw against Liverpool’s Natasha Jonas in an historic Fight of the Year contender at the top of the bill on Fight Camp Week 2.

“This is the most excited I’ve been for a fight, I feel like I’ve got a lot to prove,” said Harper. “We’ve had the opportunity in this camp to work on lots of new things, having a strength and conditioning coach join the team. I want to go out and put the wrongs right.”

“It’s an amazing feeling to know that I’m finally fighting for the World Title,” said Thanderz. “I’ve been waiting such a long time for this moment, and I just know I’ll give my everything to win the title. Harper is a young and talented fighter. I think she’s a very hard-working girl. She’s fast, she has a good technique, she has stamina, and she’s a very good fighter. It will a pleasure to share the ring with her.

“I am confident I can beat her. I have a very good feeling, and I’m working very hard in my camp to be the best version of myself. I know it will be very difficult, especially because of the circumstances of the fight, but I’m prepared to surprise and shock everyone when I get the win. I feel very good about fighting in the UK. I’ve never fought in England, so I can’t wait to have the experience of fighting in a completely new country with so many boxing fans.”

Walsall’s Ball (6-1) lands a dream World Title shot on the back of her breakout win over Shannon Courtenay on the third week of Fight Camp. The 29-year-old takes on popular undefeated Australian Ebanie Bridges (4-0, 2 KOs) for the vacant WBA Bantamweight crown.

“I’ve been craving a big fight, now I’ve got it,” said Bridges. “I’m not coming to Britain to mess around; I’m going to take this opportunity with both hands and take that belt back to Australia with me in exciting style.”

“After my last fight I’m hungrier than ever, training harder than ever and asking myself everyday how I can improve,” said Ball. “I couldn’t be more excited for this fight. We’re friends but this fight isn’t going to be pretty, it’s business.”

“This a historic moment,” said promoter Eddie Hearn. “A huge night of boxing that will be headlined by not one but three women’s World Title fights. Katie Taylor has spun the game on its head since she turned pro and has paved the way for so many great female fighters. Katie faces the second Mandatory Challenger during her undisputed reign in tough undefeated Spaniard Miriam Gutierrez.

“While fresh off a Fight of the Year contender at Fight Camp, Terri Harper faces her first Mandatory Challenger in undefeated Spanish-Norwegian Katharina Thanderz and in a fairy tale story Rachel Ball has a chance to become World Champion against popular Aussie Ebanie Bridges. This is a major statement from us and our broadcast partners, don’t miss an incredible night on November 14.”

“Katie Taylor continues her epic journey as one of the world’s elite boxers on a terrific triple-header of women’s World Title action,” said Adam Smith, Head of Boxing Development at Sky Sports. “The Irish star displayed grit and determination in a punishing rematch win over Delfine Persoon in Fight Camp, and her renowned skills should also be on show against Miriam Gutierrez.

“Terri Harper battled to a thrilling draw with Natasha Jonas in one of the year’s most enthralling fights and she is back in action, defending her WBC belt versus Katharina Thanderz. Rachel Ball also receives a World Title fight after she dropped and shocked Shannon Courtenay, but she must now overcome Ebanie Bridges. Three fantastic World Title fights – all live on Sky Sports!”

BALL: I’VE GOT TO STEP UP FROM THE COURTENAY FIGHT

Walsall warrior dismisses rematch talk ahead of World Title shot
Rachel Ball is desperate to show fans a new and improved version of herself when she takes on Argentina’s Jorgelina Guanini for the vacant WBA Bantamweight Word Title on an historic night of action at The SSE Arena, Wembley on Saturday November 14, live on Sky Sports and DAZN.

Despite dropping and outpointing popular Watford prospect Shannon Courtenay in a huge breakout win at Matchroom Fight Camp back in August, the 29-year-old care worker from Aldridge wasn’t completely satisfied with her performance and says she needs to improve if she is to defeat reigning IBF Super-Flyweight World Champion Guanini.

“I’m pleased with my performance,” said Ball. “I’m very proud of myself, but I want to show more. Some people are still questioning my ability. I want to show them what I’m really about.

“I know how hard it is to get those decisions away from home, so I was relieved when my hand went up. Shannon needs the rematch more than me. I’m not really that bothered, and that’s no disrespect to her. I just want to fight as many people as I can.”

Ball (6-1) was originally scheduled to face Ebanie Bridges for the vacant Title before the Australian was forced to withdraw from their contest due to an injury, but the former three-time kickboxing World Champion isn’t fazed in the slightest by the change of opponent and says the outcome will remain the same.

“I’ve got to take things as they come, and this is my next challenge. I’m just preparing as hard as I can for that. There’s no point me looking any further than that. I’ve been given a great opportunity and I need to grab it with both hands. I’ll see what happens afterwards.

“I am overdue a stoppage. I need to get one. I know I am going to win this fight and I’m going home with that belt. That belt is not getting on that plane! It’s mine to win. I’m just overexcited that I’m back again so soon. I keep thinking about it and I don’t know if it’s real yet.

“I feel like I’ve got a lot to prove in terms of stepping up from last time. I want to come out of the ring and have Matthew Macklin on the commentary saying, ‘this girl has really stepped up, she looks like a completely different fighter’. I want him to get excited over me, not my opponent. I want everyone to get excited about my performance, and to show how much I’ve been listening and implementing everything that I’ve been told.

“I want fans to see a different Rachel Ball from the last one. I want them to see a whole new different level of strength, power and fitness. I felt like I had a really good fight camp last time. This time it has been even better. We’ve stepped it up a whole new level so I’m expecting that to be reflected in my performance.”

« Harper vs Thanderz on Saturday, live on Sky Sports and DAZN