Gennadiy Golovkin vs. Kamil Szeremeta official for Dec.18th on DAZN 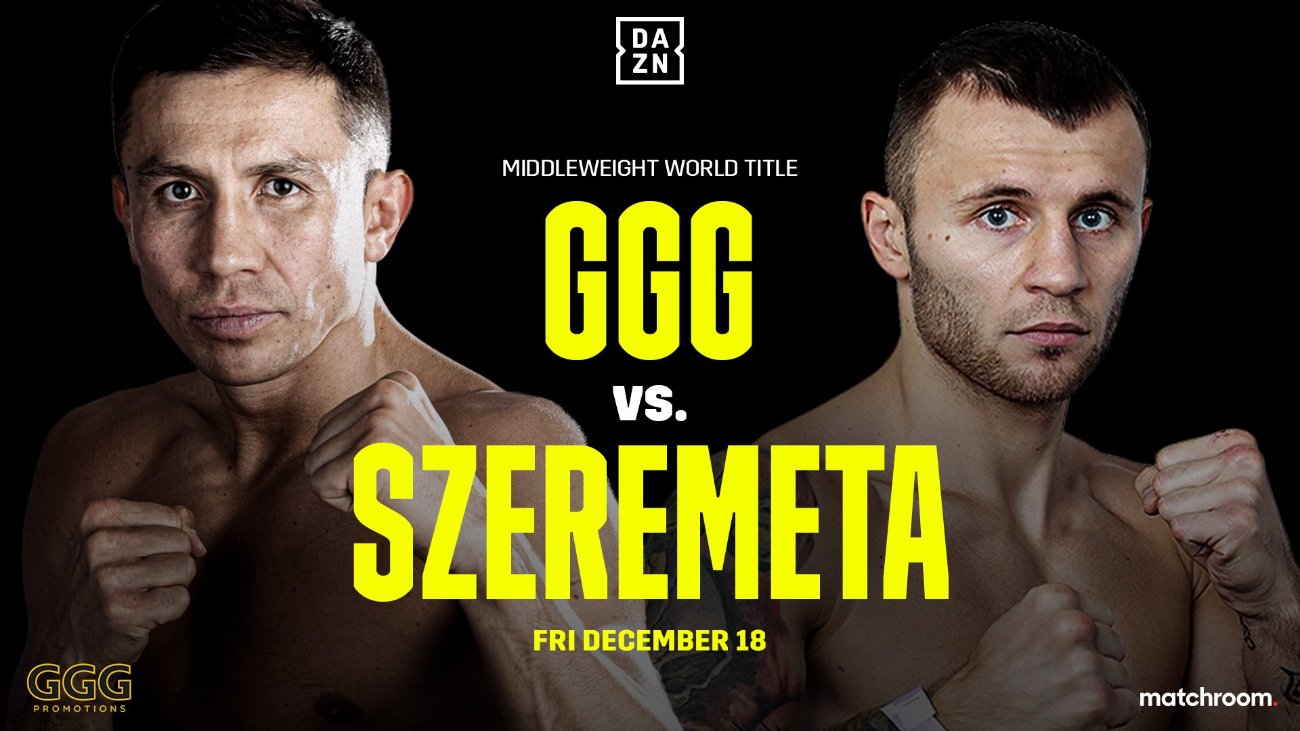 By Barry Holbrook: It’s now official that IBF middleweight champion Gennadiy Golovkin will defend against his mandatory Kamil Szeremeta on December 18th on DAZN. The streaming giant has just broken the news of the deal being done for GGG (40-1-1, 35 KOs) to face Szeremeta.

Golovkin has been in negotiations to restructure his $15 million per fight contract with DAZN. The 38-year-old GGG has already fought two of his six fights of his deal, and he’s finishing his last four fights.

Golovkin’s two previous fights on his six-fight deal with DAZN have come against Steve Rolls and Sergiy Derevyanchenko. Those weren’t exactly huge fights, and it would be interesting to know what DAZN thought of them.

With all the talented 160 and 168-lb fighters out there, Golovkin fought Rolls and Derevyanchenk. Now he’s fighting Szeremeta (20-0, 5 KOs), who is arguably a step down from those two guys, both in talent and name recognition.

“Expect an announcement imminently that GGG will fight Szeremeta on Dec. 18 after the deal was closed,” said @MikeCoppinger.

On the bright side, if Golovkin finishes his last four remaining fights on his six-fight contract without losing, it’s possible that DAZN could resign him for another short contract.

In that case, one would expect that Golovking would be signed to a two or three-fight deal. Unfortunately, it’s unlikely that GGG will finish out his remaining four fights without getting beaten at least once.

Gennadiy would likely lose more than once if he were to face some of the talented middleweights like Jermall Charlo, Derevyanchenko, Chris Eubank Jr, and Jaime Munguia.

Golovkin will be turning 39-years-old next May, and nothing is a given anymore with him. His last two fights against Derevyanchenko and Rolls showed that he’s lost a lot from his game due to age and ring-wear.

GGG could have problems against Szeremeta

It’s not a given that Golovkin will beat Szeremeta on December 18th, considering how badly he performed in his last fight in October 2019 against Sergiy Derevyanchenko. Golovkin has been out of the ring for over a year now, and that’s not going to help his game.

If Golovkin loses to the 31-year-old Szeremeta on December 18th, he can forget about facing Canelo Alvarez next May in a trilogy match. Right now, there’s a possibility that Canelo (53-1-2 36 KOs) may fight him on Cinco de Mayo next year in May on DAZN, but not if he loses to Szeremeta.

Also, Canelo needs to win his December 19th fight against WBA super-middleweight champion Callum Smith, and no one knows how that match is going to end. Callum has a lot of talent; he’s huge and is easily the biggest puncher in the division.

GGG looking to make history on Dec.18th with record-breaking defense »