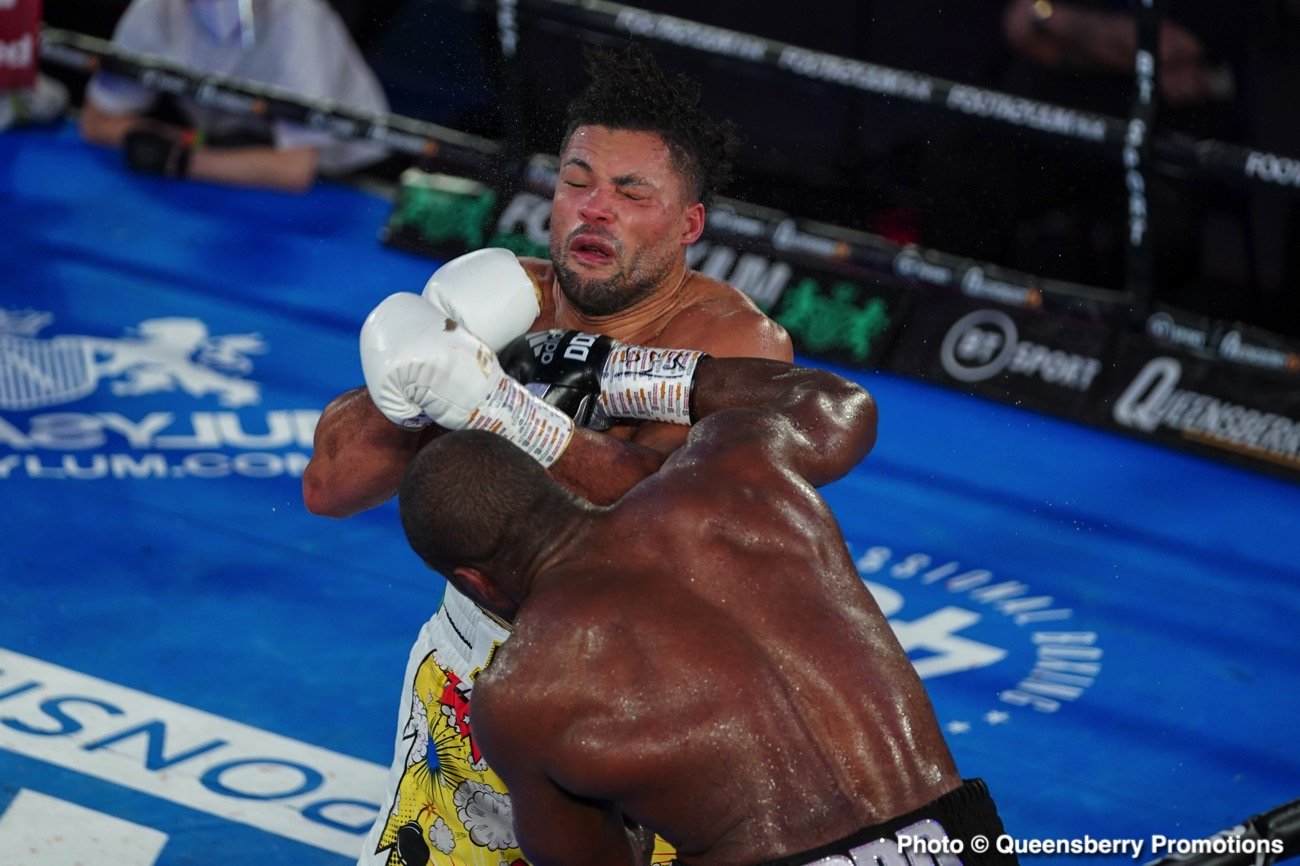 By Mark Eisner: Just moments ago, 2016 Olympic silver medalist Joe Joyce (12-0, 11 KOs) wore down the heavy favorite Daniel Dubois (15-1, 14 KOs) and scored a 10th round stoppage on Saturday night at the Church House in London, England.

In the tenth round, Dubois took a knee after Joyce nailed him with a power jab on the left eye, which had closed completely due to swelling. The referee waved it off at that point. The time of the stoppage was at 0:36 of the tenth.

Dubois had landed a lot of big power shots in the fight, but Joyce calmly took them and returned fire with his jab, which was like power on its own. After eating Joyce’s jab through the first eight rounds, Dubois began to wear down starting in the 9th.

He stopped throwing as many punches, and he looked punched drunk from having eating many jabs. Dubois also looked exhausted from the fast pace, and he had nothing left going into the tenth.

In that round, Joyce came out firing on all eight cylinders, teeing off with his power jab, and he broke the 23-year-old Dubois, causing him to take a knee and quit.

Joyce The Juggernaut” Joyce and Daniel Dubois are headlining tonight on BT Sport and ESPN+ from the Church House in Westminster, London, England. Joyce (11-0, 10 KOs) wants to prove the doubters wrong about him being too old at 35 and slow to beat the young lion Dubois (15-0, 14 KOs).

2016 Olympic super heavyweight silver medalist Joyce and the young upstart Dubois will be fighting for the vacant EBU title. Joyce is going to try and use nonstop pressure and a fast pace to wear row Dubois tonight.

It won’t be easy for Joyce to do, but you can believe he’s going to give it his all. The fact that Joyce trimmed down to 258 lbs for the contest gives you a hint that he’s going to push a fast pace on Dubois and see if he can keep up.

That belt has rarely been mentioned during the run-up to their fight tonight, seeing that the real prize is the World Boxing Organization’s high ranking.

Although Joyce is considerably older than the 23-year-old Dubois, he has low mileage due to his late boxing start. Dubois is still believed by many to be the fighter with the two’s brighter future, and some even believe he’s destined for greatness. Tonight, Dubois can prove whether people were right about him.

If Dubois is the blue-chip guy that his fanatics believe him to be, he’ll take care of the 6’6″, 258-lb Joyce without any issues tonight. Both of these guys can punch, so it may not matter which of the two has better talent. Dubois is being given the Anthony Joshua treatment.

It could come down to which of the two giant heavyweights lands their bombs first. For Joyce to win, he’s going to need to eat a lot of leather tonight because he’s not the type of puncher that can score an early knockout.

It’s not going to be an easy thing for Dubois to stop Joyce from coming forward because he’s good at getting in close and battering his opponents until they wear down under his heavy shots.

If there’s anything to criticize about tonight’s fight Dubois vs. Joyce card, it’s the lack of a quality undercard. There isn’t one notable fight on the undercard; that’s very disappointing.

With the interest boxing fans have in the Joyce vs. Dubois fight, you would think that their promoter would have assembled a good undercard.

At the minimum, there should be at least a quality fight in the co-feature bout. That’s not happening. The chief support for the card is light-welterweight vs. Abderrazak Houya. Catterall is mandatory for WBO 140-lb champion Jose Ramirez, but no one believes that he’ll have a chance of beating the American in 2021.