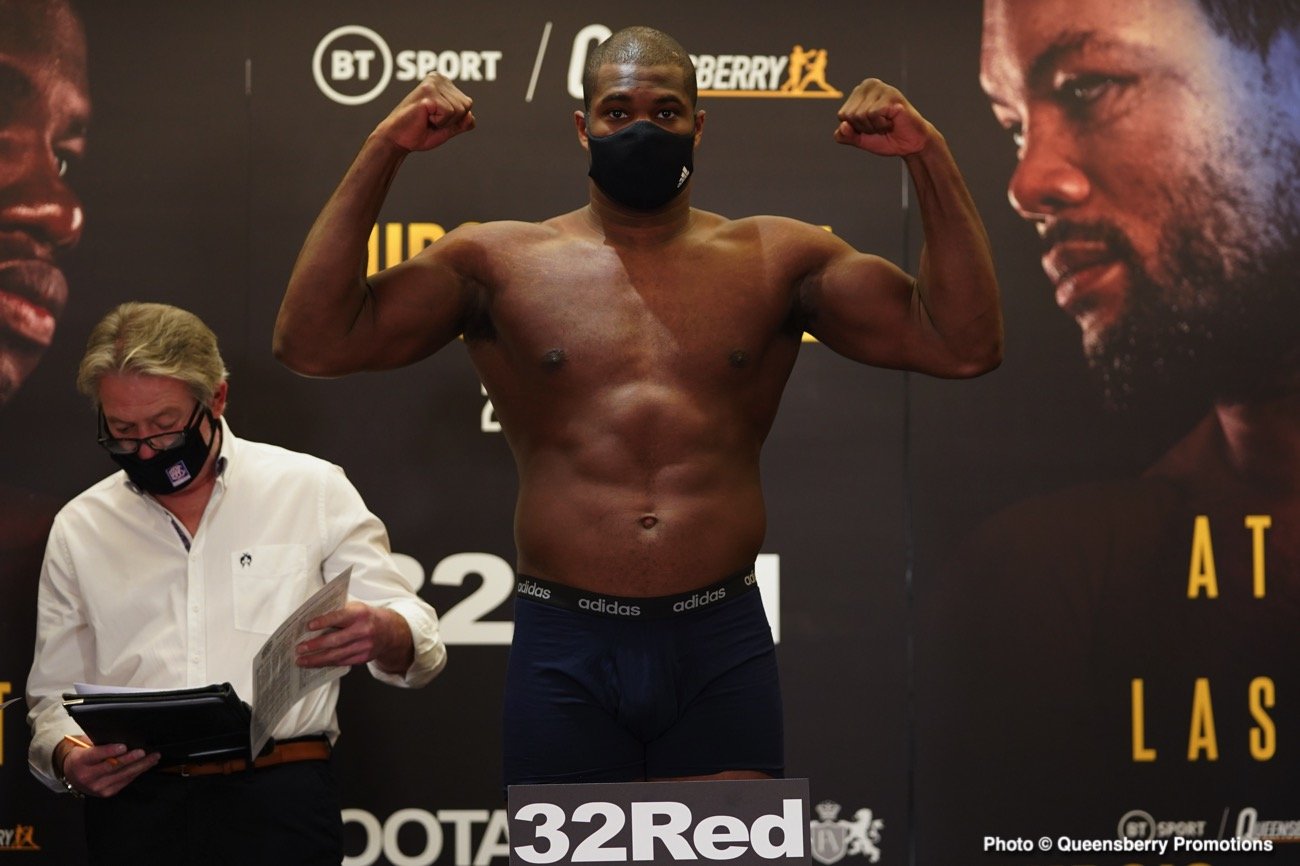 Daniel Dubois vs Joe Joyce is a fight that has captured the British public’s imagination with fans and pundits alike calling it the biggest all-British Heavyweight fight in many years.

UK fans will be watching exclusively live on BT Sport 1 HD tomorrow night at 7.30pm but the fight has also caught the attention of a global audience and Queensberry can confirm that over 100 countries will broadcast the fight this weekend.

Joining BT Sport 1 HD in taking this momentous event into peoples homes will be ESPN+ in the United States, amongst others.

For a full list of broadcast partners please see the below:

I’m a little bit worried about whether it’s too early for Daniel Dubois. Joe Joyce is a big, strong, seasoned man. We know he’s got a good engine, and he can hold a shot well. It’s a hard one, but for my money, it’s a bit too soon for Daniel Dubois.

I see it being a shoot out. I think Dubois’ extra speed will give him the edge, and I think he’ll win by knockout.

I think most people will lean to Dubois slightly because he’s a man in form. He’s a little bit fresher. Joe’s had a very distinguished amateur career; maybe he has a few more miles on the clock than Daniel. He’s quite versatile, Joe. He can do pretty much everything. His style is a little bit in-your-face, though, which might suit Daniel Dubois. I think it’s a 50-50 fight, but Daniel might be a little bit fresher… I think that might make the difference.

My prediction is an explosive fight. It could go either way. They’re both big punching guys looking for the big one. I edge towards Dubois at this moment.

I think if Daniel Dubois can land a big shot early on, it’ll be his contest. If Joe can get through the first 3 or 4 rounds and take Daniel into the later stages… then the tide could turn after 5 or 6 rounds. If I had to put money on it, I’d probably just fancy Daniel, to be honest.

I think it’ll be an excellent fight. I quite highly favor Dubois, but if Joyce can weather a bit of a storm, then I think he’s in with a chance. If you put a gun to my head, I’d have to put my money on Dubois.

It’s a real 50-50 fight, in my opinion. I think many people are writing Joe off, but it’s a lot closer than that. Joyce has got a good amateur pedigree. Daniel, on the other hand, is a big power puncher, a massive backhand. I’ll favor Daniel; over six, it’ll be interesting to see what happens.

50-50 in my mind. Obviously, Joyce can shift a shot; he’s more experienced coming from the amateurs. He’s had some good fights as a professional. Then you’ve got a young boy Daniel Dubois, British champion, on his way up. I know it’s a cliché to say that if it goes long, Joyce will win it and if it goes short, Daniel will win it, but really, I wish good luck to both men, hope they put up a good fight, and may the best man win.

This one is fascinating. Both guys are punchers. Dubois is technically better than Joe, but Joe, even though he looks really unorthodox, he’s got an engine as I’ve never seen before in my life. I was lucky enough to train with him, and I’ve never seen a fitter boxer. He’ll want to apply his pressure to Dubois and make him work hard from the start. I think it’s going to be a great fight, Joe’s going to force the pace from the start, and he’s going to walk onto a lot of shots, so it’s all about how well his chin holds up. The later the fight goes on, the more chance that Joe has, but I’m going to stay with Dubois on this one. I think Dubois will get to him at some point, probably a stoppage in the middle rounds.

(Picking Joe Joyce) “It’s the intensity he fights at. It’s his unconventional, unorthodox style that can throw people a lot. Bryant Jennings is a top operator… and Joyce is getting in with him when he hasn’t even had ten professional fights. I believe (Joe) is an Olympic Gold medaller, really. So, Joe’s going into the fight in my eyes as the favorite.

Two top blokes throwing down for our entertainment. Like everybody else, I see either Daniel early or Joe late. I can’t see it going the distance. Joe is tough, but he does get hit. If Daniel can open him up with that jab and left to the body, the headshots will come. I can’t see Joe getting knocked out, but I can see him stopped on his feet.

I have to pick Daniel. The momentum is with him. Joe seems too easy to hit with the right hand. Joyce may have a great chin, but he can’t keep taking those all night. This is going to be a great fight. It reminds me of Lennox Lewis v Gary Mason.

I love this fight — a clash of styles, with the outcome in doubt. Big Joe is physically strong, durable, more experienced, and has reached, but he’s slow. Dubois is more mobile, can be explosive, and has potential out the ying-yang. This is a great domestic brawl. The kid’s more athletic, and I’m predicting a mid/late stoppage for Daniel.

I’m so pleased that we are getting the sort of domestic dust-up that so many fighters try to avoid, it’s a 50/50 fight, but if I had to pick, my prediction is that Daniel wins via TKO round 4. This is going to be a great fight.

This is a real gut check for Dubois. As much as people will predict big things about his future, he has never beaten anyone nearly as good or experienced as Joyce, and I could easily see Joyce wearing down Dubois and stopping Dubois. However, I think the difference between the pair is defense. Joyce doesn’t mind taking a shot, and at some point, that will be his downfall. Joyce will take some shifting, but if Dubois catches him cleanly often enough, he will stop him. Dubois 7-9.

I believe Dubois will have to come through some storms early in the fight; Joyce will be relentless and will pile plenty of pressure on while may even come close to forcing a stoppage of his own, but I think the younger man will dig deeper and find something late on. But it will need the referee to take Joyce out as he will be brave and want to fight on.

Going to be a great fight, two of the biggest prospects in Heavyweight boxing tearing it up, like the good old days. It’s as close to a 50/50 as you can get. Still, I’m slightly leaning towards Joyce as he’s more experienced in big matches, his physical maturity, and experience in big fights and competition like the Olympics, etc.

I keep changing my mind on this one. I’m going for the Peacock Gym team to tip the balance with their experience and Dubois to get a hard-fought stoppage around 7.

I think it’s an excellent 50/50 fight and has the makings to be a classic. Dubois is a phenomenal talent but is this a match-up too early for him? I could not pick a winner as there are too many unknowns, but if I had too I would have to pick Joyce because I have seen him in the deep end before. Good luck to both.

We know a few things going into this fight: Joe Joyce has a granite chin and serious engine, and Daniel Dubois can absolutely bang. Combined, those factors suggest we will see Joyce look to survive an inevitable onslaught in the first few rounds and take Dubois into deep waters late on. I’m not sure he makes it and can see the referee stepping in to save him before it gets that far.

I think it’s a top fight between two very good Heavyweights who are both on the up. It’s a good clash of styles. If Dubois has it in the tank, I think he wins; he’s better all round. If he doesn’t and doesn’t do Joyce in the first few rounds, Joyce could come on for a late stoppage. But, my pick is Dubois win, 4-6 rounds.

I believe ‘Dynamite’ Dubois is gonna explode on point and extinguish Joe Joyce within six rounds.

Many people are writing Joe off, but he’s GB’s most decorated amateur for a reason. I’m going for JJ’s win.

I can’t back against Daniel, his rise and his camp have been so seamless and continuous, whereas Joe, for all his talent, has never really settled anywhere or been the main man. I have only seen Joe Hurt once, and that was to the body. I think Daniel will target that and get the job done.

This is an enticing, thrilling match-up and a crossroads fight for both Dubois and Joyce. Dubois has the edge in speed and devastating power, but Joyce looks like he means business and victory would elevate him to the top of the division. If Joyce is still there and intact after six rounds, it will be fascinating, especially if Joyce’s punches have tested Dubois. I think Dubois wins this if he can take those punches around the sixth round.

It could be one to remember, coming at such a pivotal time for both. I believe Dubois’s accuracy with the left hand – the jab and the body shot – will be the key factor in the outcome, offsetting the greater work rate of Joyce.

AT LAST, Dubois vs Joyce is finally happening. It is a fight that has captured the public imagination and it goes down this Saturday night live on BT Sport 1 HD from 7.30pm.

Ahead of another huge night of boxing on BT Sport tomorrow, the competitors today weighed-in and faced off inside the fighter bubble hotel.