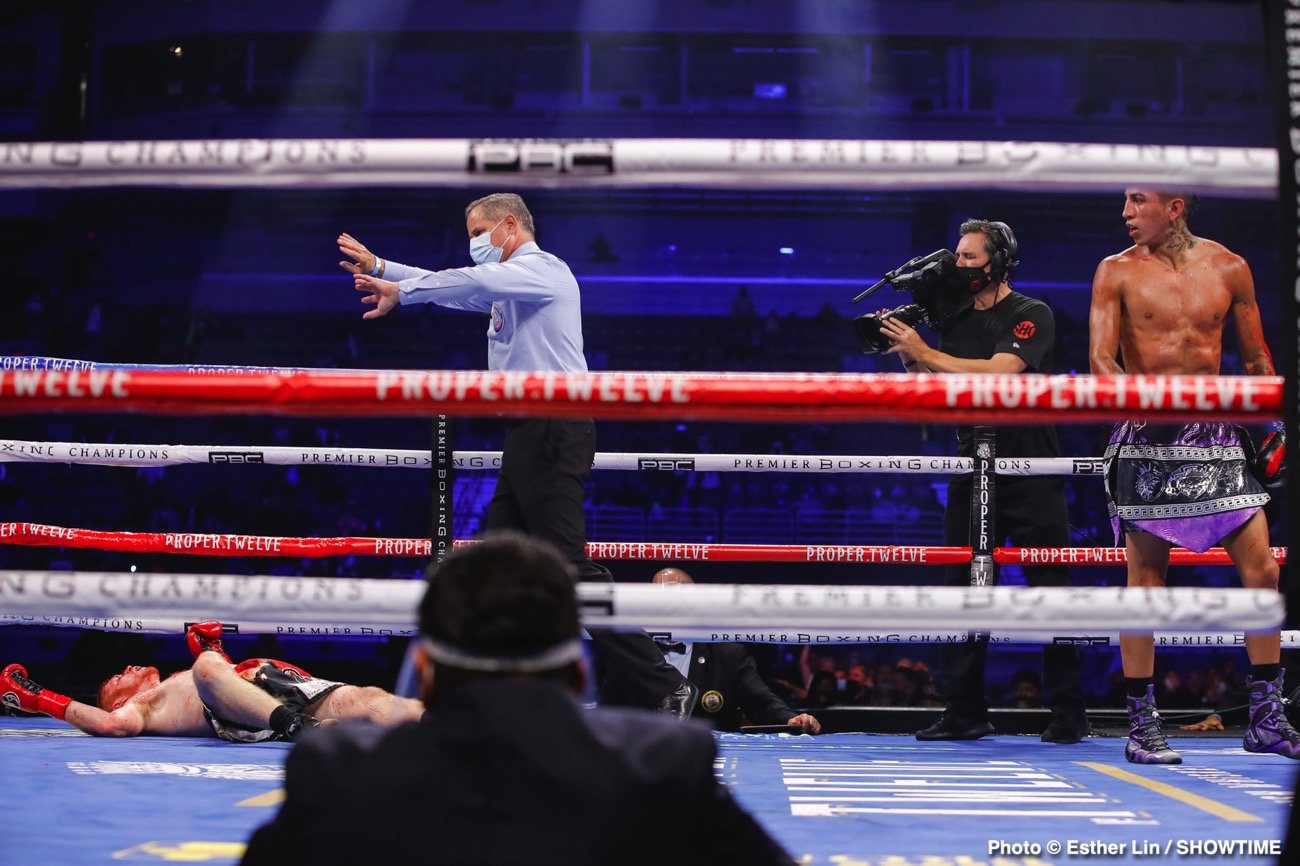 Barrios KO 6 Karl. MARIO BARRIOS: “It took a minute to get used to his pressure, he was very awkward. I eventually found my rhythm as the rounds started progressing.

“I’d give myself a B. I had a little trouble finding my jab because of his pressure. I thought I was slipping his shots well and finding my shots up the middle.

“He was throwing with bad intentions. He landed some punches. But there wasn’t anything that hurt me or that threw me off.

“I’m very excited by the outcome of this fight. It’s an honor to be the first fighter from San Antonio to defend his world title.

“I’m in the sport to give fans exciting fights. A fight with Regis Prograis would be huge. That’s a fight that’s very likely to happen.

“I didn’t feel any ring rust tonight. I was just being patient and I was ready for a 12 round fight. I was just taking my time, picking my spots and avoiding his wild shots.

“I’m one of the stronger fighters at 140. I showed I carried my power for 12 rounds against Batyr Akhemdov. I think the rest of the division should take notice of that.

“Part of my style is attacking the body. I’ve always been a fan of body shots. They really pay off in the 12 round fights in the middle and late rounds. I knew Ryan’s style and I knew I had to slow him down so he wouldn’t be so rough for 12 rounds.

“This fight is for everybody who came out here in San Antonio tonight. I told them we’d get this first title defense, and I hope everyone enjoyed it.

“I’ve known Ryan a long time. I knew he was going to come hard at me, but I also knew that it was his only chance. I was just being patient and picking my shots. I started to really land them and got him out of there.

“I was ready to go a hard 12 rounds, but my patience helped me get him out of there. I listened to what Virgil was telling me in the corner. It was great to get the job done here at home

“I feel fine. Hard hit that I got hit with. It was a tough fight, good fight, close fight I felt like. Good headbutt, bleeding pretty good but overall I feel fine. I’m not a sore loser. I come to fight, that’s what I expected was a fight. And so congrats to Mario on the win. We’ll move on from here.

“I wish the referee never would’ve stopped it. That’s how I feel about fights. I felt like I wanted to fight, I wanted a chance to get up and continue. But it is what it is. That’s his job, he has his and I have mine. And we obviously have different mindsets, because I’m the one fighting. But of course, like I said I would always like to continue if I have a chance.

“He’s a good fighter. He beat me. I felt like if I would’ve had more rounds it could’ve been different, but he’s a very good fighter and I take nothing from him.

“Hopefully another shot is next. That’s really all I want. I’m game and I’m here to fight.”

From the opening bell, Mercado used effective footwork and lateral movement to set up his shots as Sanchez was the aggressor. Because of Mercado’s movement, Sanchez was getting frustrated as the fight continued into the later rounds. Sanchez was missing his target while throwing a lot of wile punches. Mercado got stronger as the fight went on and landed some powerful uppercuts in the final rounds. Scorecards read 80-72, 79-73, 77-75 all in favor of Mercado.

“It feels good to come out victorious, especially against another undefeated fighter,” said Mercado. “In my last fight I beat Valdovinos, who was also unbeaten at the time. I have a long way to go but I’m headed in the right direction. Tonight I proved to myself and my team, as well as those watching, that I can go eight full rounds. I know with hard work, I’ll become a big name in this sport.”

The 4-round co-feature showcased welterweights prospects Esteban “Stone Hands” Munoz (3-1, 2 KO), of San Bernardino, CA, vs. McArio DelCastillo (0-4), of Santa Monica, Ca. Munoz landed clean shots throughout the bout as DelCasillo did his best to apply effective pressure. Munoz dominated each round winning by unanimous decision. Scorecards read 40-36 across the board.

“This was a good fight for me, and I dominated from the opening bell,” stated Munoz. “I landed a lot of powerful blows and almost got him out of there, but he was a tough opponent. I’m ready to get back in the ring as soon as possible as I didn’t take any punishment.”

The opening bout featured two fighters making their pro debuts in the super bantamweight division as Lazaro Vargas (1-0, 1 KO) of Indio, CA, faced Szel Martinez (0-1) Vargas landed a picture perfect straight right hand body blow to the mid-section of Martinez, forcing the referee to stop the bout at the :22 second mark of round one.

“This was my pro debut and wanted to come out aggressive and make a statement,” said Vargas. “I knew he wasn’t going to get up after I landed that straight right to his body. It was a perfect shot and I’m happy with my performance. As soon as I get back home I’ll be right back in the gym.”

On what felt like the coldest night of the year in Rhode Island, New England’s top fighters brought the heat Thursday in a short, but sweet, pro boxing showcase at “The Tent.”

Fan-favorite Toka Kahn-Clary of Providence scored a second-round knockout victory in the main event and highly-decorated welterweight James Perella won for the sixth time in as many fights as CES Boxing ended its eight-month layoff live from the Crowne Plaza Hotel on UFC FIGHT PASS®.

The event featured four bouts – a fifth, Khiry Todd versus Ryan Pino, was scratched earlier in the day with Todd suffering from a non-COVID illness – highlighted by Kahn’s triumphant return following 14 months away from boxing. The fighters braved the elements, working through bitter cold and a driving wind, with no fans in attendance as many of them returned to action for the first time since the onset of the coronavirus pandemic in early March. For CES, Thursday was the promotion’s first live event since late February, a layoff sparked by the cancelation of its March 12 show on the morning of fight night.

Kahn, now 28-2 with 19 knockouts, faced Colombian challenger Jonathan Perez (38-26), whom he defeated via knockout in California in 2015, in the eight-round main event. Nicknamed “Popeye,” Perez entered Thursday’s rematch with a chip on his shoulder and a loaded resume that featured 30 wins by knockout in addition to five bouts against undefeated opponents over the past three years.

After a slow opening round, Kahn picked up the pace and floored Perez with an uppercut midway through the second. Perez tried to beat the count, but fell face-first back into the canvas, forcing referee Danny Schiavone to wave it off at the 1:49 mark. Kahn has now won three in a row since suffering his second career defeat in 2018, a loss that prompted him to jump from featherweight to super featherweight.

The 28-year-old Perella (6-0) – a decorated amateur, aspiring law student, and part-time actor – received much-needed on-the-job training in a tough bout against “The Mexican Muscle” Antonio Castillo (1-2). Perella had stopped four of his previous five opponents, but Castillo – a three-time CES MMA veteran in addition to his acumen as a boxer – kept Perella off guard with slick head movement and effective footwork. Perella adjusted on the fly, using his reach to keep his distance and stepping back to create space to launch his effective left hook. Castillo kept charging, but Perella won by a score of 40-36 on all three scorecards.

Like Perella, up-and-coming middleweight prospect Francis Hogan (3-0, 3 KOs) of Weymouth, MA, made his CES and FIGHT PASS debut, stopping Washington’s Charon Spain (2-14-2) at the 2:39 mark of the fourth round of a scheduled six-round bout. Only 20 years of age, Hogan was originally supposed to face 14-2 veteran Jeyson Minda in an eight-round showdown, but Minda was not cleared medically, prompting Spain to step to the plate on short notice.

A veteran of 68 pro bouts between MMA and boxing, Spain was a worthy adversary through three rounds until Hogan began to let his hands go in the fourth, scoring a knockdown with a straight left hand midway through the round. Spain tried to survive the closing seconds, but Hogan poured it on, forcing Schiavone to step in and stop the bout at the 2:39 mark.

In the opening bout, rising prospect Elijah Peixoto (3-0, 2 KOs) of East Providence, RI, made quick work of Kris Berberich (0-2), earning the stoppage with lethal body work at 2:42 of the opening round. Fighting for the first time since August of 2019, Peixoto won 119 bouts as an amateur and has each of his last two fights since signing a long-term promotional agreement with CES.

Thomas “Cornflake” LaManna (29-4-1) of Millville, New Jersey impressively knocked out Jorge ‘El Tigre’ Pimentel (30-27) of Sonora at 1 minute and 24 seconds of the first round in Agua Prieta, Sonora in a closed-door event.

The contest was held at La Terraza Sport Bar and was organized by Rising Star Promotions México, which has been attracting a lot of attention with its international evenings. The bout was set to 10 rounds in the super welterweight division, where Thomas was looking for a win after two setbacks in his last two bouts. LaManna quoted “I just want to get back to where I was before I got robbed in California against Brian Mendoza. I know where I belong, but I will just keep getting better and smarter. I would love to fight two more times before the year is over”.

Since the fight began, Pimentel sought with his experience that ‘Cornflake’ would be easy prey, he looked for the scoring round, however, cornflake did not come with good intentions and wanted to return home quickly. It was with a strong right straight to the jaw that pummeled Pimentel to the canvas. The referee did not need to count and ended the fight declaring a KO1 in favor of LaManna.

In the main event fight of the night, Roberto ‘El Viejo’ Valenzuela Jr, (14-2) also known as ‘El Héroe de Nacozari’, came out on his night to forcefully defeat Carlos Jacobo (21-21-1) of Sinaloa, whom he sent to the canvas with a surprising hook to the liver. The bout was scheduled for 8 rounds at super welterweight.

Middleweight Gabriel Pham (13-2) defeated Víctor Alfonso León (9-13) by TKO at 2 minutes 35 seconds into the second round.

Welterweight Gael Ibarra (5-2) prevails by technical knockout 2 minutes into the second round against Miguel Zavala.

Lightweight Jonel Lorenzo (6-1) dispatched by knockout at minute, 54 seconds of the first roll to Alejandro Aguilar (1-4).

Bantamweight Justice Brand (3-1) of Brooklyn, NY knocked out Rigo Cruz (2-5) at 2 minutes and 55 seconds into the first round

Light Heavyweight Edgar Valenzuela (1-0) defeated Jesús Beltrán (0-1) in a battle of pro debuters by way of TKO in the first round.

The Rise and Rise of Chris Colbert »