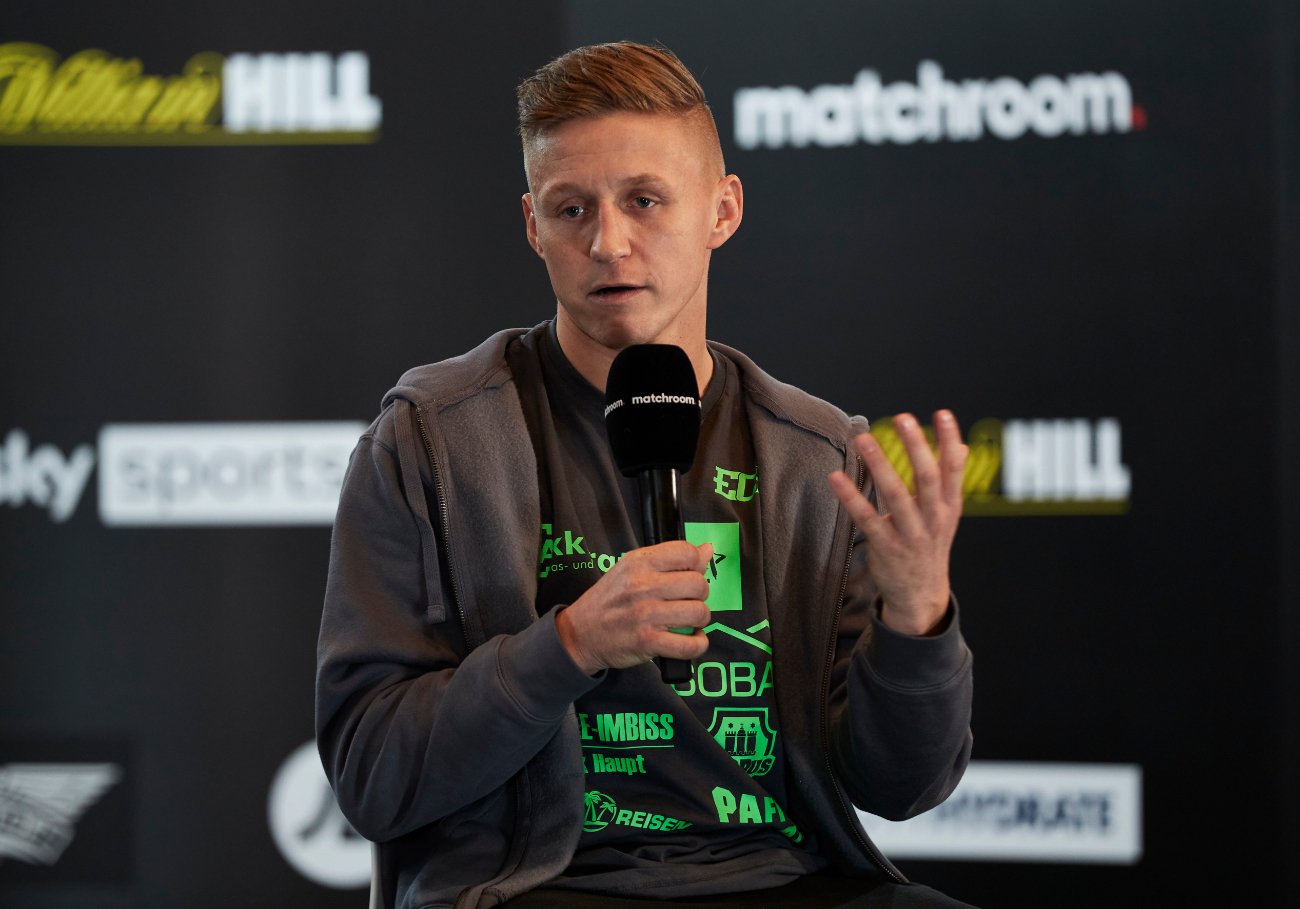 “Here, we go again. We’re back in the bubble. We’re up against it once again. Every week and every show is a bonus. Last week was a tremendous show. A women’s World Championship triple-header, the great Katie Taylor, the numbers were through the roof. Boxing is buzzing. Somehow, someway, we’re finding a way to keep cracking on with great shows. This Saturday night, we’re live and exclusive on Sky Sports and DAZN in the US.”

Ilford, England – 16-0, 11 KOs – defending his WBA Continental Welterweight Title against Sebastian Formella:
“The novelty does wear off. I miss my family. On Saturday night, I will take that frustration out on my opponent. I’ve worked too hard to get to where I am now to let it slip between my fingers.

“To many, I’m a role model. I will always be Nigel Benn’s son to the older generation, but the younger generation says to him: ‘Oh, you are Conor Benn’s dad!’

“There will be ups and downs. I have come through adversity. The sky is the limit. I will reach the end goal, but I won’t put a time limit on it. And I don’t know when. I don’t know what I’ll have to go through to get there.

“But I will get there because I’ve too hard. I plan to show that I am the business. My four-year apprenticeship is done, finished. I’m here to prove that I am a contender.

“He’s a tough opponent, but that doesn’t bother me. People said Jussi Koivula would beat me, but he got banged out. If you get hit by a right hand, left hook, it doesn’t matter who you are.

“I’ve got to win in good fashion. I’m good for 10 rounds or to get him out in the first couple. It’s not down to him. It doesn’t matter what he does. If he wants to move, I’ll hunt him down. If he wants to have a tear-up? More fool him, I’ll soon make him regret that. 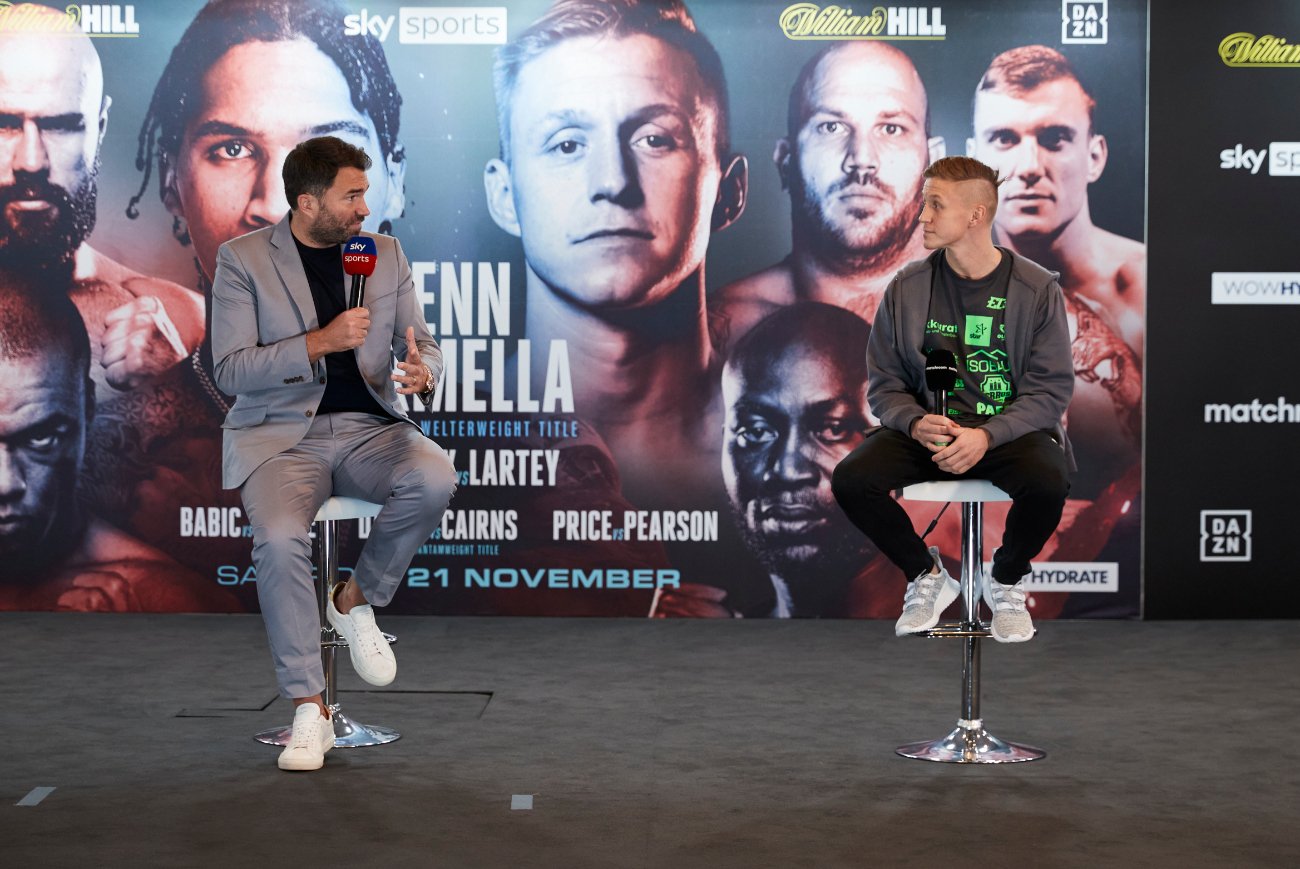 “He’s nice and polite – trying to be Andy Ruiz Jr – waving at me from across the room! It ain’t all good when we get in there. I know he thinks this is an easy fight. I’ve sacrificed too much for me not to perform.”

“Firstly, I would like to thank everyone for their hospitality. The staff has been accommodating, and I feel completely at home. It’s very cool to stay here in the bubble.

“Conor Benn is a difficult fighter to face with good skills. It will be a good fight. I have trained very hard. Of course, I will win the fight on Saturday. I won’t make it easy for him.

“I learned to put up my hands and have a good defense in my last fight against Shawn Porter. Of course, it is a short amount of time after the Shawn Porter fight, but it was enough to change things slightly. It was an excellent experience, and I was happy to do this fight in America.

“Because I am higher in the rankings than him, I am the test for him. He is also a good fighter, and I have seen many of his fights. He comes forward and has a good defense when he wants.

“It’s a good step up for both of us because when I win the fight, there will be more good fights in the future for me. It could be a tactical fight, or we could stand feet to feet and fight, hitting each other all of the time.”

Ipswich, England – 9-0, 8 KOs – fighting Richard Lartey in a ten-round Heavyweight contest:
“I’m always ready for the step-up. This is another fight on our progress of me moving forward, proving that the different tests you throw at me, the different types of opponent, whatever they may be, that I can overcome them.

“Obviously prove that I’m a real contender for the division, that I’m here to do some damage and make some waves. 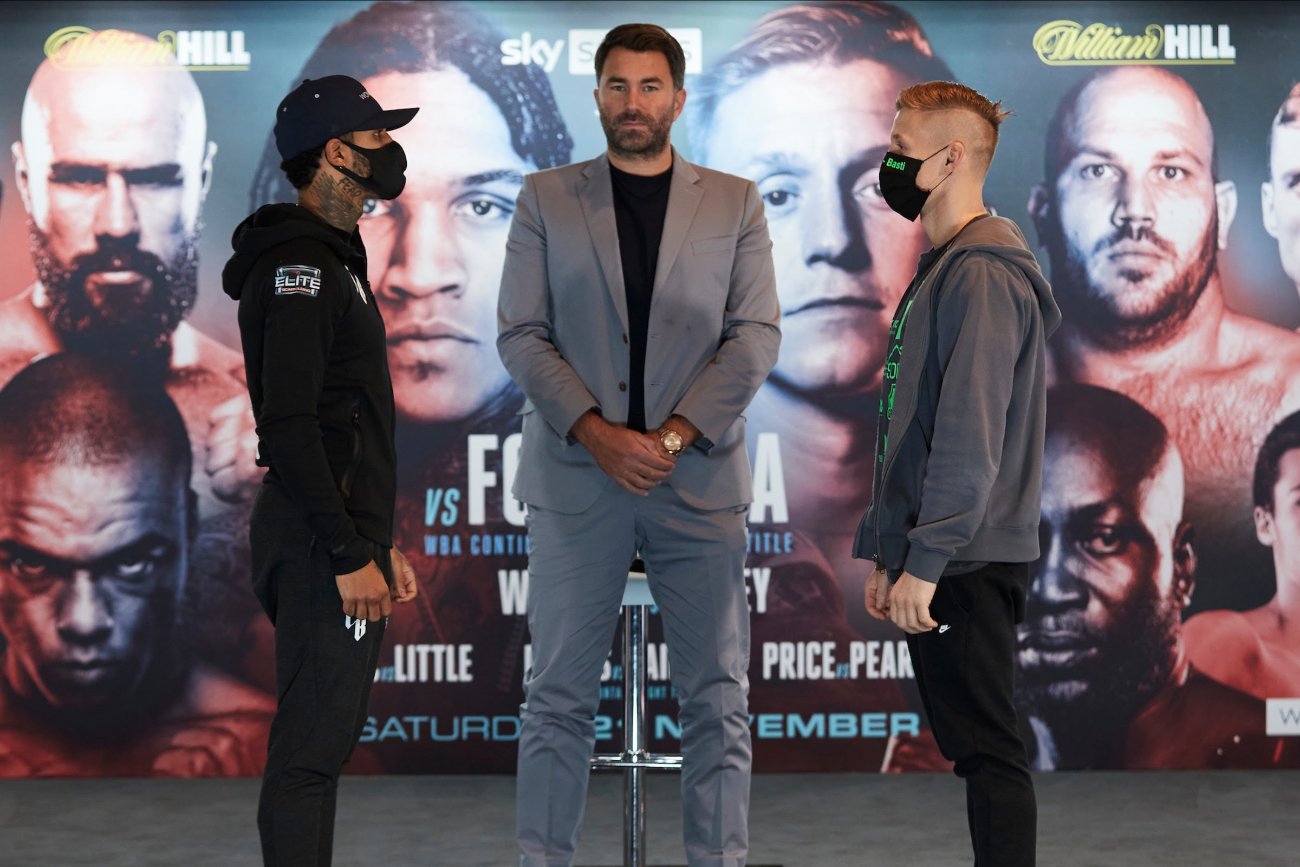 “You’ve seen in his previous fights, he was more than happy to stand there and go toe to toe with Daniel and try and take his jaw, and he’ll be doing the same with me.

“I’ve got to be switched on, I’ve got to be paying attention, and as long as I stick behind my game plan, I can always get them out of there.”

“Thank you very much for this opportunity. I respect Matchroom for giving me such a wonderful opportunity to appear on this bill. Thank you to Wardley for accepting this contest.

“I have to respect anybody that I come into contact with within the ring. No party, no Lartey is coming on Saturday. We’re coming to do some wonderful work in the ring.

“I respect my opponent and the people that have brought me here to fight in London again. This is my third time being in London. I’ve got a lot of fans who I know will be watching. I thank them for what they are doing for me.

“I know definitely something massive and positive is going to come on Saturday night. I’m not here to joke; I’m here to prove my worth.”

Zagreb, Croatia – 5-0, 5 KOs – fighting Tom Little in an eight-round Heavyweight contest:
“Why does he talk like that? I said nothing but nice things, so why do you take Hrgovic’s side? That’s a sell-out. You can’t be in ‘The Savage’ army anymore.

“There is a lot of disrespect. They always talk about Hrgovic. I don’t care about him – he has fought no-one. You are not a friend; you are a sell-out. Hrgovic said, you are a bum, but you take his side? 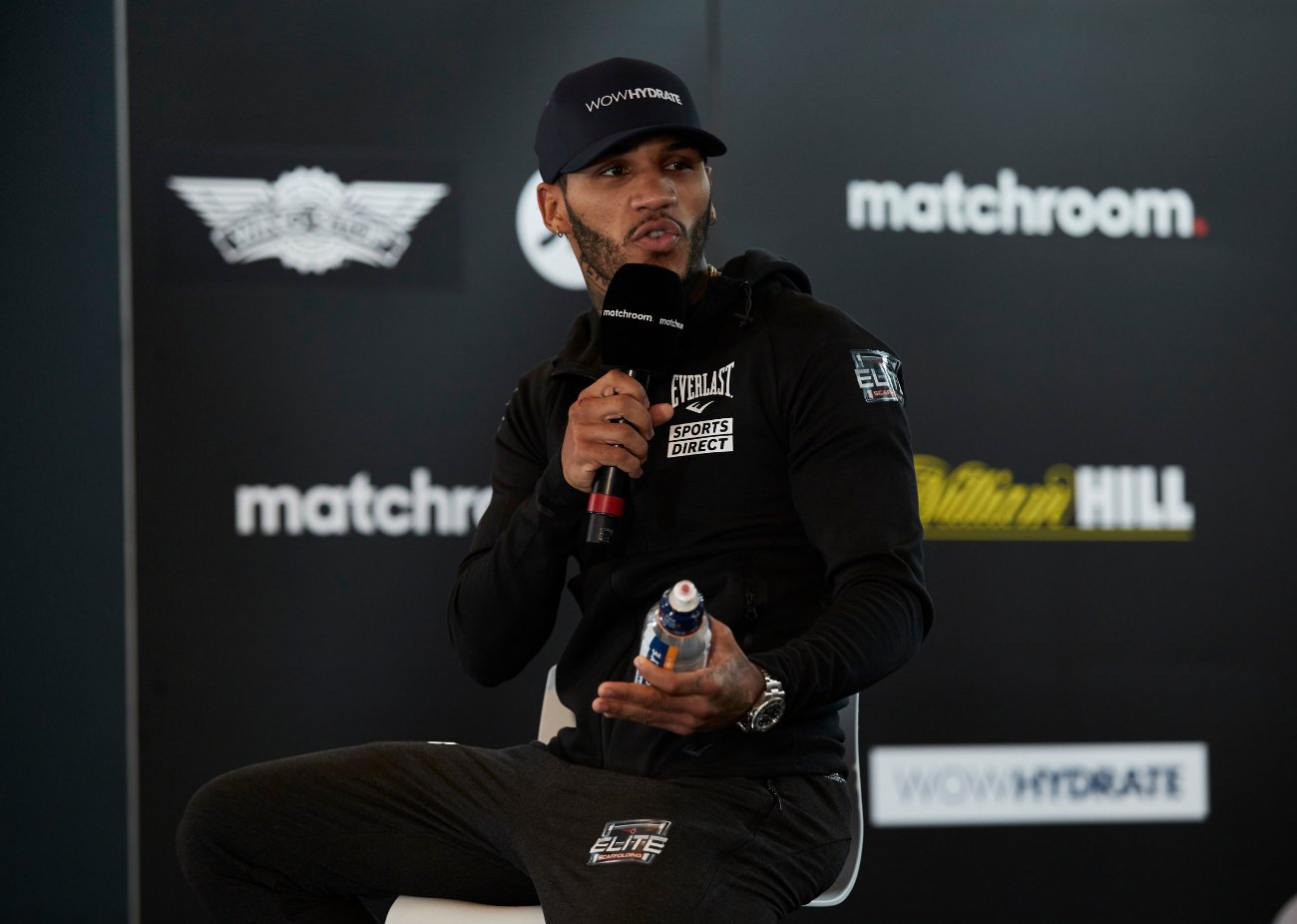 “You have done cross-fit for one month, and you talk like you have the biggest arms. He talks like I am nothing. I have five fights, 10 rounds. Everybody beat you, brother!”

“‘The Savage’ is mad. I was his friend when he was as fat as a doughnut. Now he says he will finish me then say ‘Hrgovic is better.’ Why does he say this?

“Everyone can keep doubting me. I’ve heard enough. I keep knocking everyone out in two rounds. I’ll knock him out in one round. One round is my plan. Everyone keeps questioning me.”

Hatfield, England – 10-8, 3 KOs – fighting Alen Babic in an eight-round Heavyweight contest:
“I had an epiphany when I got home from Saudi Arabia. This runs deeper than just me. For what I want to do, this is the first stop on the way. I’ve said a lot of cheap words, but they were masking agents.

“I rate Babic highly. But this isn’t about how I rate him. If he can manage to get the job done, he is fighting [a better version of me] than Hrgovic, Dubois, or Majidov fought.

“This man and I have promised everyone a war: blood and guts. We will go out and deliver. I’m not going to run. I’m a man of my word, and I’ll meet him in the middle. I won’t give any ground.”

“I wouldn’t be surprised if both of us have to climb off the canvas. There is not a cowardly bone in my body. I am there to fight, bleed, and win.” 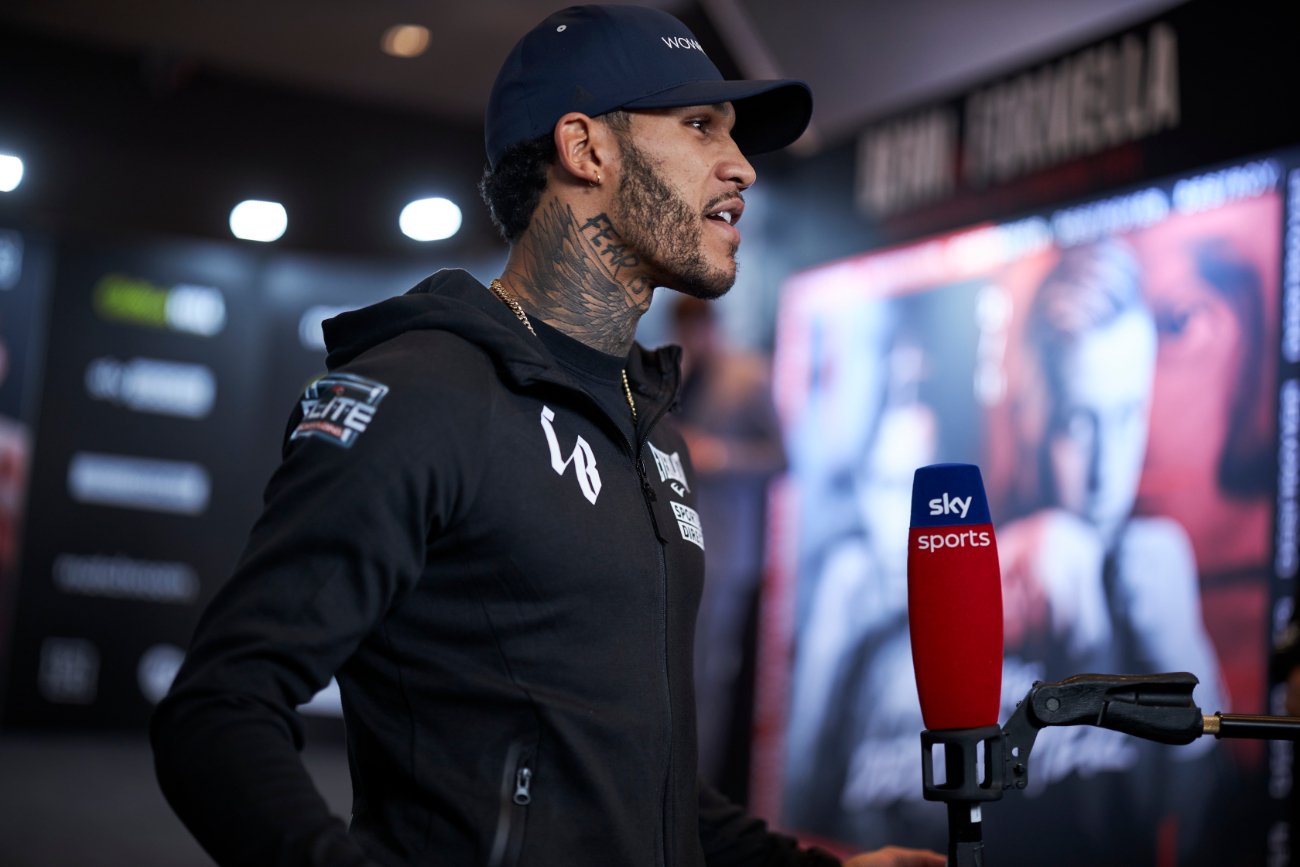 “I was ecstatic when I got the call, to be honest, because as you all know, I was supposed to be appearing on the Ultimate Boxxer competition fighting Zak Chelli, but that fell through because Kieran and I tested positive for coronavirus, so we’ve been quarantining ever since. I was just at home with my family when we got the call for this fight. One minute it was on, one minute it was off.

“Everyone is looking at my old YouTube videos. I’ve not fought like that in nearly two years now. I’ve been sparring the best every week. And I’ve been sparring Callum Smith every Wednesday. Obviously, there are other great fighters in that gym. I fight completely differently. I can hold my own. It’s going to be exciting.

“I’m going to fight with everything that I’ve got. I’m just a local Bury lad. It’s a massive opportunity; look at all of these cameras! He’s a good fighter; I’m not taking that away from him. If he’s looking through me think it’s going to be an easy win for him, he needs to think differently because I am game for the night. It’s the biggest stage that I could be on, and I’m here.”

“Firstly, I’d like to thank Eddie and Matchroom for having me on this show. I stay ready all of the time. I’m always in good fights. On Saturday night, Ben is getting smashed. It’s as simple as that. There are levels to this game, and he’s taking a step up too quickly. 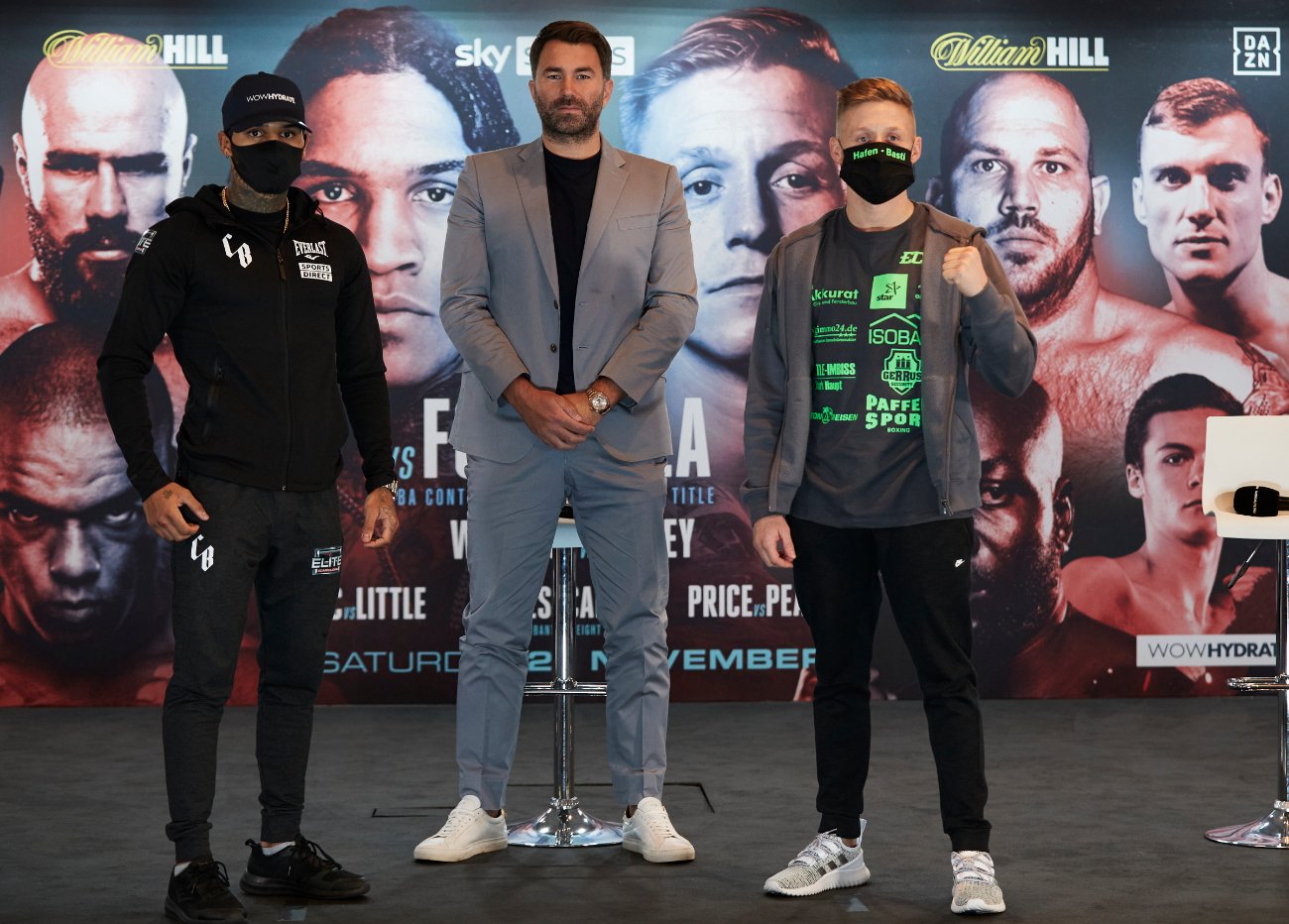 He’s getting dealt with on Saturday. I think my experience will be too much for him. He hasn’t been in with anybody. He’s only fought, journeymen. I know he’s been out of the ring for a while.

If he comes and has a scrap, he gets knocked out. If he comes to the box, he gets smashes. Either way, on Saturday night, it’s going to be a dominant performance from me, and I’m going to deal with him. I probably start too fast sometimes. Six rounds definitively won’t be a problem for me.”

“I want to start by saying thank you to Eddie Hearn, Matchroom, BCB, and Errol Johnson for making this happen. I’m here, and I’m ready to grab it with both hands. I’m so excited, and what a card to be on. Hopefully, it’s my first title of many. Expect some well-skilled boxing and a guaranteed win for Liam Davies. This is the hardest fight of my professional career, and I expect that. I know he’s a tall awkward southpaw; I’m tall myself, so it’s going to be a great fight, and I can’t wait to get in there now.”

“We’ve both got to take our opportunities, haven’t we. Liam is looking past me, and I know he’s looking past me. I like that. This is what you dream of when you turn pro, isn’t it. To be on big shows like this. I’m just so blessed to be here.

If you’d look at my life ten years ago, you’d have never dreamed of my being here. Honest to god, I’m just so blessed to be here, and I’m going to take advantage of that. I’m going to grab this opportunity with both hands, and you’ll have me back again.

“And I’m a great advert for what boxing can do for you. I’m from probably the roughest part of Liverpool. You’re a product of your environment, aren’t you? I was led down the wrong road when I was younger, but boxing took me out of that, and look where I’m sitting now.

Ten years ago, you would never expect it. Not even ten years ago, seven years ago, even. Where I’m from, there are no youth clubs or anything like that anymore. There are only boxing clubs for the kids to go to. They’re the only places that keep kids off the streets. Boxing has saved my life.”

« John Riel Casimero vs. Guillermo Rigondeaux in the works for March or April 2021