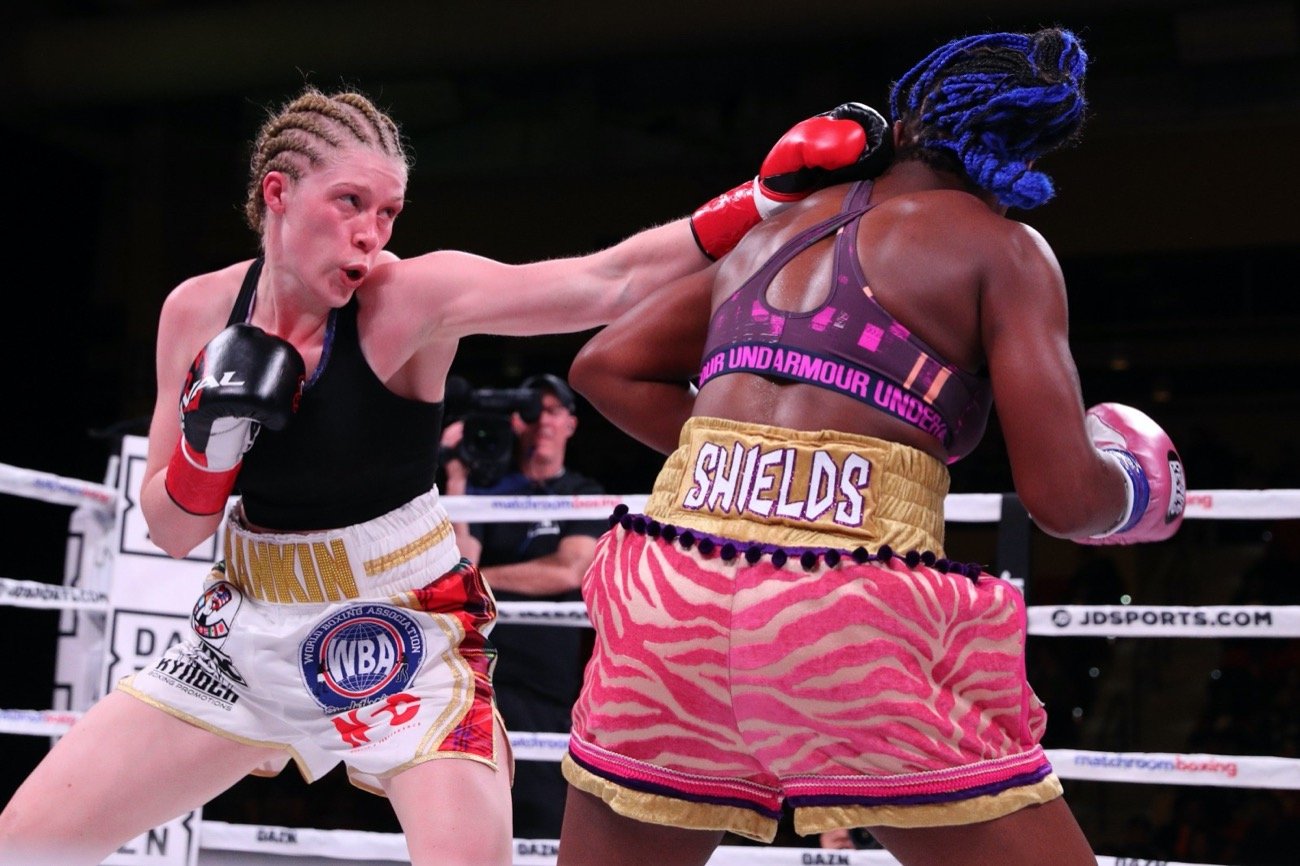 Savannah Marshall and Hannah Rankin will contest the vacant WBO Middleweight World Title on the undercard of Oleksandr Usyk vs. Derek Chisora on Saturday October 31, live on Sky Sports Box Office in the UK and DAZN in the US.

The pair were scheduled to meet on the Lewis Ritson vs. Miguel Vazquez show in Peterborough on Saturday October 17 but Marshall’s trainer Peter Fury returned a positive COVID-19 test, resulting in the fight being postponed in line with the British Boxing Board of Control rules.

“Honestly it has been a dream to have this fight rescheduled so quickly,” said Marshall. “After the past week I’ve just been overjoyed with the news. I couldn’t have asked for a better or bigger platform than on the Usyk vs. Chisora bill.

“It was frustrating that the fight fell through, but it’s one of those things. There was nothing I could have done about it. Peter is okay which is the main thing.

“My training won’t change and will just be like any other training routine 10 days out from a fight. Nothing will change. It hasn’t got more personal for me, as me and Rankin are just two girls that can’t wait for a dust up with each other.”

“It is great that the fight has been rescheduled so soon, thank you to Eddie Hearn and Matchroom for sorting it all out,” said Rankin. “Nothing changes for me. I will be crowned WBO Middleweight World Champion on October 31.”

Adam Smith, Head of Boxing Development at Sky Sports, said: “It’s fantastic news that Savannah Marshall’s World Title fight with Hannah Rankin has been swiftly rescheduled for the Usyk-Chisora bill, which is fast becoming an unmissable night of action.

“Women’s boxing has never been stronger, with Ellie Scotney showcasing her talent last weekend, and now we can look forward to an all-British battle between Marshall and Rankin, with the WBO Middleweight belt at stake. Savannah, a former Sky Scholar, has those polished amateur skills but Rankin has greater professional experience – it’s an enthralling encounter.

“Lee Selby is also targeting another World Title shot on a stacked undercard, which also features Tommy McCarthy’s European Title fight, before Usyk and Chisora take centre stage, in what promises to be a Heavyweight classic!”

RANKIN: YOU CAN’T BE A KEYBOARD WARRIOR!

Glaswegian expects ‘barnstormer’ in battle of Britain
There is no love lost between Savannah Marshall and Hannah Rankin, which is just as well because the fists are about to fly, live on Sky Sports Box Office in the UK and on DAZN in all of its nine markets including the U.S.

Marshall and Rankin’s battle of Britain is more than a spat between two rivals, it’s a shoot-out at The SSE Arena Wembley for the vacant WBO World Middleweight Title.

The 29 and 30-year-olds clash on the undercard of one of the biggest Heavyweight fights of the year where ex-undisputed World Cruiserweight king Oleksandr Usyk puts his unbeaten record on the line against Britain’s Derek Chisora.

Marshall vs. Rankin looks a beauty, as the English girl with medal after medal on the amateur scene meets the battle-hardened Scot who has been in the trenches four times in World Title scraps.

“It’s a perfect match-up,” said Rankin, who is confident of ending the unbeaten record of her opponent she has already indulged in some social media jabs with. “It’s been on the cards for some time and I think people are genuinely excited by a proper 50-50 fight. I think me and Sav will be a real barnstormer and people know that and that’s why there was such a sense of anticipation.

“After I lost my World Title, Savannah thought it was appropriate to go on social media and start saying I needed the opportunity to fight her, and it would be nice for her to give me that opportunity. I’ve made all of my own opportunities in this sport. I became World Champion off my own back. Me and my team did it ourselves.

“Firstly, that’s disrespectful. Also, I’m a former World Champion. Exactly what has she done? Nothing in the professional game. When we were in the bubble I expected her to say something to me, but she said nothing. You can’t be a keyboard warrior and then say nothing when you’re face to face with people. It’s just not appropriate, and it’s disrespectful.”

Rankin believes the contest will eclipse the terrific tussle between new-kid-on-the-block Terri Harper and Marshall’s old Olympic team-mate Natasha Jonas for the WBC and IBO world Super-Featherweight belts in August.

“This is the first big fight at one of the higher weights in the UK, I don’t think there’s been a World Championship bout above Super-Lightweight before,” said the Glasgow star.

“There’s not been anything like this before, we’ve been on a collision course for a while, we can both bang and there are a lot of things that can happen in this fight. I’ve been buzzing for this and think boxing fans are excited too.”

“I wanted this fight to happen and it is. What else is there left to say about it? The fight is on. I’ve trained for months for this. It has been a long camp. I just can’t wait to get in there.

“I’ve rattled Hannah’s cage. I expect a tough fight from her. A really tough fight. She’s got loads of heart and she’s not goI boxed at Light-Heavy and Super-Middle – I feel sharper at this weight.

“I was absolutely gutted, as I’m sure Savannah also was, last time were in the bubble. Just to be on a huge card like this is massive. It’s a really exciting card to be on. I think our fight is worthy of being on this card. I can’t wait for it.

“I’m just pumped up for this fight and really ready to go. I’m excited to get in there on Saturday night and showcase what I can do by winning that Word Title.

“I’ve had much more experience and Savannah hasn’t had these tests yet. I’ll pull her into deep waters. We’ll go into the last rounds – she will sink or swim. The Claressa Shields vs. Savannah fight won’t happen after I take the World Title home on Saturday.”

Demetrius Andrade vs. D’Mitrius Ballard possible for Nov.27 on DAZN »