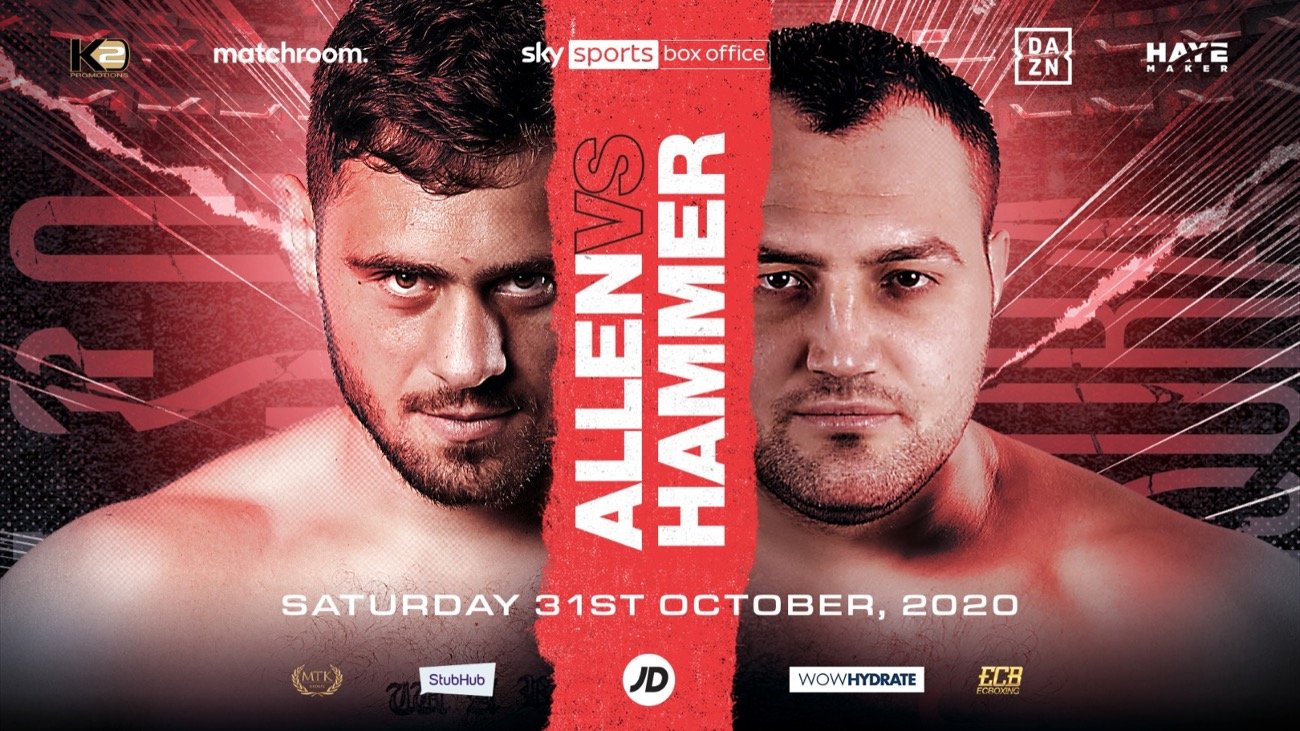 The 28 year old Conisbrough Heavyweight scored an early KO over Dorian Darch on his first outing of the year back in February, which followed a topsy-turvy 2019 with victory over Lucas Browne but defeat to David Price.

“I’m really happy to fight Christian Hammer,” said Allen. “He’s highly ranked and is a tough, strong man. A win here puts me back to fringe World level. He’s got a win over David Price so that would half put my defeat to bed.”

‘The White Rhino’ has been sparring Oleksandr Usyk in Kiev for the past two weeks and believes the experience will stand in him good stead as he links back up with trainer Jamie Moore for their first fight together.

“Sparring Usyk has taken me to another level. He’s one of the best pound-for-pound fighters on the planet. I’ve picked up so much from him and it’s given me the confidence that I will need to get through ten rounds with Hammer.”

“I am very much looking forward to this fight, I love to box in the UK. I fondly remember the victory over David Price,” said Hammer. “That is exactly where I will continue against Allen. Once I beat Allen the big fights will come my way. I appreciate this opportunity and I will not be defeated.”

Promoter Eddie Hearn added: “This is a great fight for Dave, and absolute sink or swim time. Hammer has shown the highest of levels consistently and both fighters are looking at this opportunity as springboard to major fights. I honestly don’t know what’s going to happen or who is going to win, there’s only one way to find out!”

Allen vs Hammer joins Selby vs Kambosos Jr, McCarthy vs Laggoune and Timlin vs Skelly on the huge Usyk vs Chisora card, Saturday 31st October 2020.

Lee Selby will take on George Kambosos Jr in a Final Eliminator for the IBF Lightweight World Title on the undercard of the blockbuster Heavyweight clash between Oleksandr Usyk and Derek Chisora on Saturday October 31, live on Sky Sports Box Office in the UK and DAZN in the US.

The pair were due to meet in Selby’s native Wales at the Motorpoint Arena Cardiff earlier this year in May before the ongoing coronavirus pandemic forced the event to be postponed, but the rivals now have a chance to lock horns following a spicy build-up over the past few months.

Kambosos Jr (18-0, 10 KOs), hailing from Sydney in Australia, defeated former World Champion Mickey Bey on away territory at Madison Square Garden in New York last time out to announce himself as a rising star of the Lightweight division and has vowed to ‘retire’ Selby.

“I’m delighted that Eddie Hearn and Matchroom Boxing have managed to get this fight on again,” said Selby. “I’m one step away from a shot at the IBF Lightweight World Title and my dream of becoming Wales’ first ever two-weight World Champion.

“Kambosos Jr is a hungry young fighter that I know will bring it all, but I’ve had some of my best performances against Australian boxers stopping both Corey McConnell and Joel Brunker in title fights and October 31 will be no different.”

Adam Smith, Head of Boxing Development at Sky Sports, said: “Lee Selby’s crucial clash with George Kambosos Jr is an exciting addition to the Usyk vs Chisora bill, with more fantastic fights to follow in the coming weeks.

“The classy Welshman is one of Britain’s most skilful operators, but the dangerous Kambosos Jr will be determined to fulfil his own ambitions. Can Lee Selby produce a vintage performance to earn another world Title fight? We’ll find out on October 31st before Usyk and Chisora collide in an enthralling Heavyweight showdown!”

McCarthy (16-2, 8 KOs) edged past Fabio Turchi last October to put himself back into title contention whilst Laggoune (25-1-2, 14 KOs) has won five on the bounce since suffering his sole career defeat in February 2017.

“I can’t wait to fight,” revealed McCarthy. “This is a brilliant opportunity and huge platform on a Sky Sports Box Office show.

“Winning this European Title leads to a World Title shot and that’s what I’m chasing down.”

Mark Dunlop, manager to McCarthy said: “This is a massive night in Tommy’s career. We know it’s going to be a tough fight against Bilal but I have 100% belief that my man will get his hand raised on the night with a nice, new shiny belt over his shoulder and move one step closer to a World Title shot.”

Promoter Eddie Hearn added: “After a great win in Italy this is a huge chance for Tommy to become European Champion. It’s such an exciting time for the domestic Cruiserweight division and victory against the tough Laggoune will give the opportunity for some huge fights on both domestic and World level.”

The unbeaten pair were scheduled to fight earlier this month but now find themselves on the undercard to Oleksandr Usyk’s monster fight against Derek Chisora.

Rising star Timlin (4-0) is tipped for a bright future, training under the tutelage of Kieran Farrell and managed by Dave Coldwell.

“I’m buzzing for this. I’ve been training throughout lockdown and I’m ready to go. This fight will push me on, it’s all about learning. The pressure is on her, Carly will come out all guns blazing but we’ve got a steady game plan. I can’t wait for the first bell, this platform is huge,” revealed Timlin.

“I’m really exited to have Amy on such a massive show like this. Thanks to Eddie for giving us a slot in these testing times. Amy is a fantastic fighter, at 20 years old I think she’ll show people in the next year or two she is the next generation of flag bearers coming through in Women’s boxing,” said Coldwell.

“It’s been a long camp having to juggle things about but I’ve had some time off recently to concentrate on the fight,” said Skelly. “It’s a massive risk for Amy to take at her age, she won’t have felt power like this from a more mature fighter. This fight opens doors, I believe in myself and want to reach World level.”

Promoter Eddie Hearn added: “We’ve seen some amazing domestic fights recently in women’s boxing and this is another cracker. Two unbeaten fighters gunning for a World Title, the winner here will put themselves into contention for just that in 2021.”

Timlin vs Skelly joins McCarthy vs Laggoune and Selby vs Kambosos Jr on the Usyk-Chisora undercard with more additions to be confirmed shortly.