Kildare’s Katelynn is Phelan on top of the world 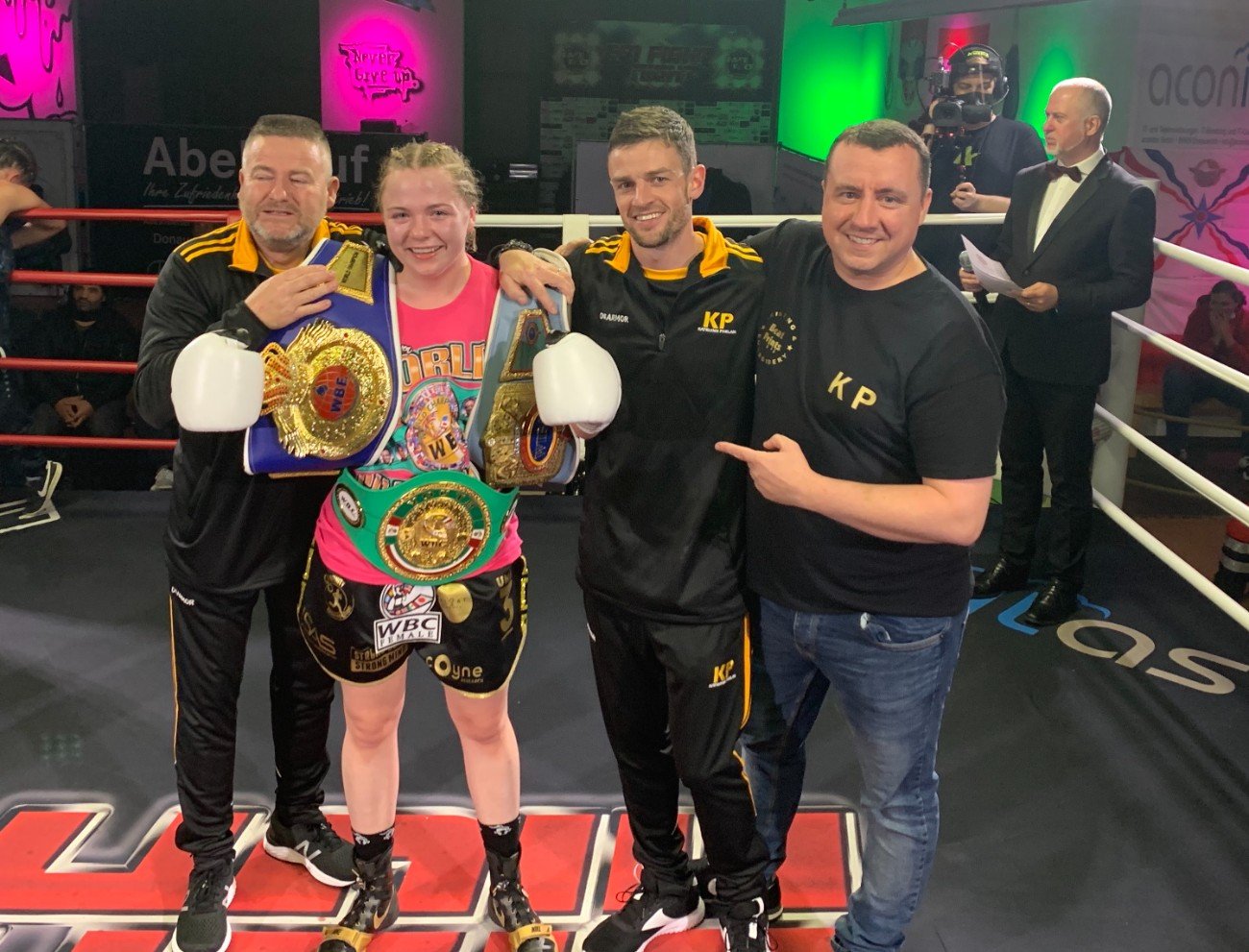 Katelynn Phelan from Kildare Town went into the proverbial lion’s den on Saturday night in Germany and emerged with three belts and the collective attention of the women’s boxing world. The 20-year-old Boxing Ireland Promotions fighter upset the odds in the Munich suburb of Donauwoerth, forcing fancied German starlet Jessica Schadko to quit on her stool following five rounds of punishment.

The destructive performance saw Phelan pick up the WBC Youth, WIBA World, and WBF World title belts along with the acclaim of all in Irish boxing and further fight offers from as far afield as America. Not bad for a fighter who was being brought over to the CPI Gym, Schadko’s home venue, to lose.

It was the definition of a ‘smash and grab’ from Phelan, a World Youth and European Junior bronze medallist, who was wholly overlooked by her opponent’s team. The Lilywhite, and coach Naas-based Niall Barrett, leaned in to their circumstances and Phelan explains how “we kind of guessed that they were underestimating me so we thought it would be a great idea if we went quiet.

All my fights were taken down [off the internet], my social media was private, nothing could be seen – they didn’t really know what to expect, all they could see was a 3-0 record. They didn’t know my amateur record, what my fights were like, what I was training like. We kept everything as a surprise attack.”

Underestimated or not, going to Germany for a major fight aged just 20 and with only three pro bouts under her belt was a calculated risk – but the sort of risk that Phelan feels honour-bound to take. She notes how “it was a massive risk to come over here but, then again, I am a professional fighter, I signed up for it when I signed my professional contract. 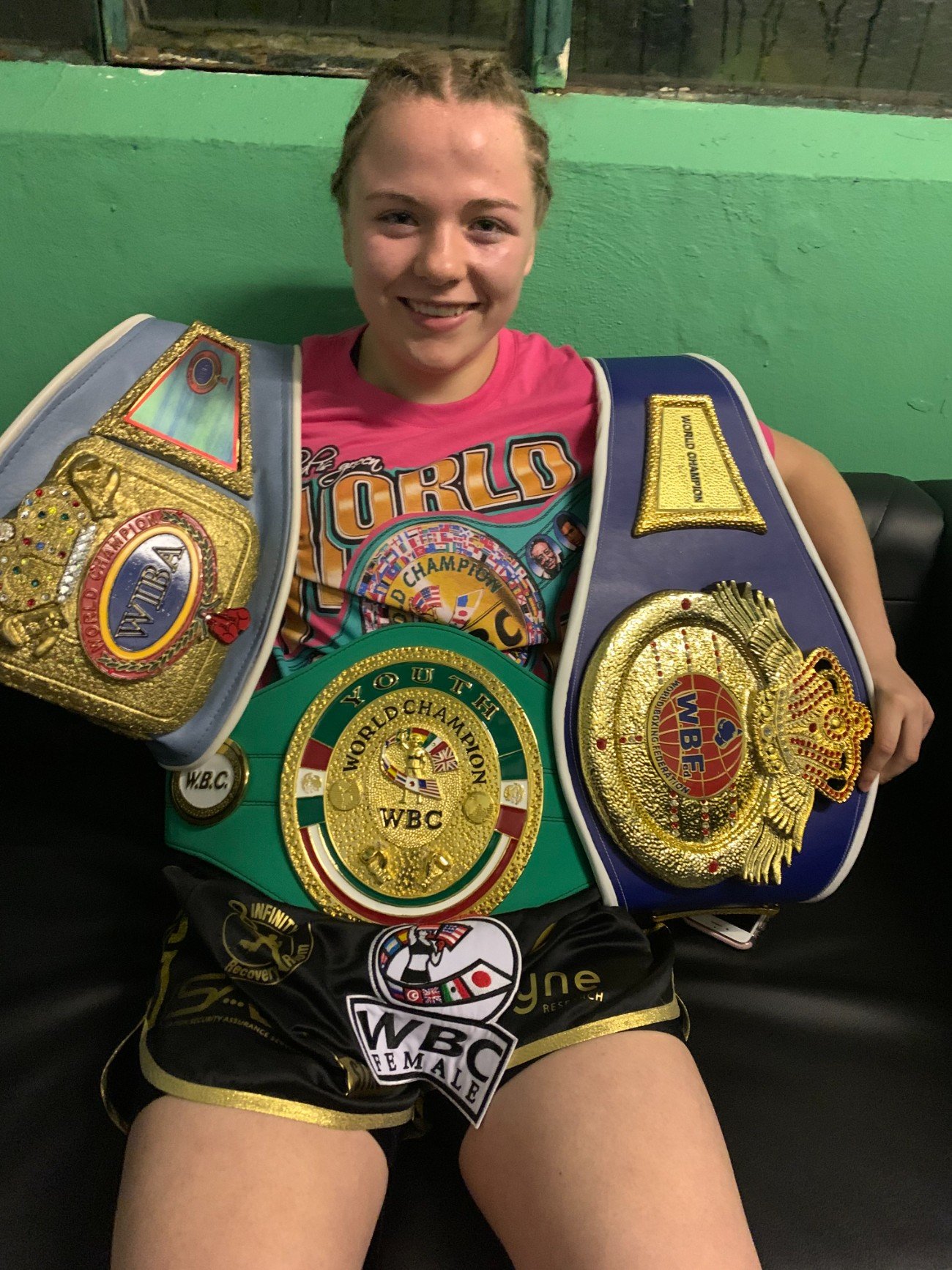 If you don’t take opportunities like this and big risks, then you’re not going to get offered them again. We had to take it with both hands and I’m glad I did. Of course you’re going to have the nerves and you’re not going to know what to expect, you’re in a different country. But we just had to sit down and stay calm, stay relaxed. I have a good team around me and everyone was supportive, especially everyone at home as well.”

When the fight did start, it was a beat-down in Bavaria, with Phelan dominating from start to finish. The St Brigid’s BC graduate was too skilled, too strong, and too hungry for Schadko whose team brought an end to the contest at the half-way point. Phelan describes how “as soon as my head gets through the ropes, that’s it, everything’s focused on punching. I can control everything when I’m in that ring, it’s all down to me then.

I knew from the first punch I threw – I could actually tell from her eyes when we were touching gloves, she was looking away, she wouldn’t look at me. That’s how I knew I had her, that this was my fight, I just made her fight my fight. I knew we’d get the stoppage, I knew it’d be in the sixth round, I just had that feeling. I knew exactly that I’d get a stoppage, that she wouldn’t be able to handle the power that I have – not many females will.”

While always confident, Phelan is never usually outspoken – that is, until asked about what is next. The youngster states that the away day win “is only a stepping stone, I’m looking for the big, big things. Next time I want to headline Goff’s. Goff’s, get on to us, I want to headline a show there.”

Proud promoter Leonard Gunning from Boxing Ireland Promotions paid credit to his new champion. The Sligo boxing boss said that “it was an unbelievable performance from such a young girl under the circumstances which she found herself in.

No domestic Irish boxing because of COVID, she had to travel into the backyard of an undefeated fighter, in her own home gym – no-one gave her a chance. But everyone in the team believed in her – special credit has to go to her father, Paddy Phelan, and her coach, Niall Barrett, who really knew what she had in the locker and what she could deliver on.”

“From the first bell, she never let Jessica Schadko have a moment’s peace. She silenced the German crowd within the first minute, she landed some vicious and heavy shots. She pummelled Schadko into submission and saw her pulled out at the end of the fifth round. 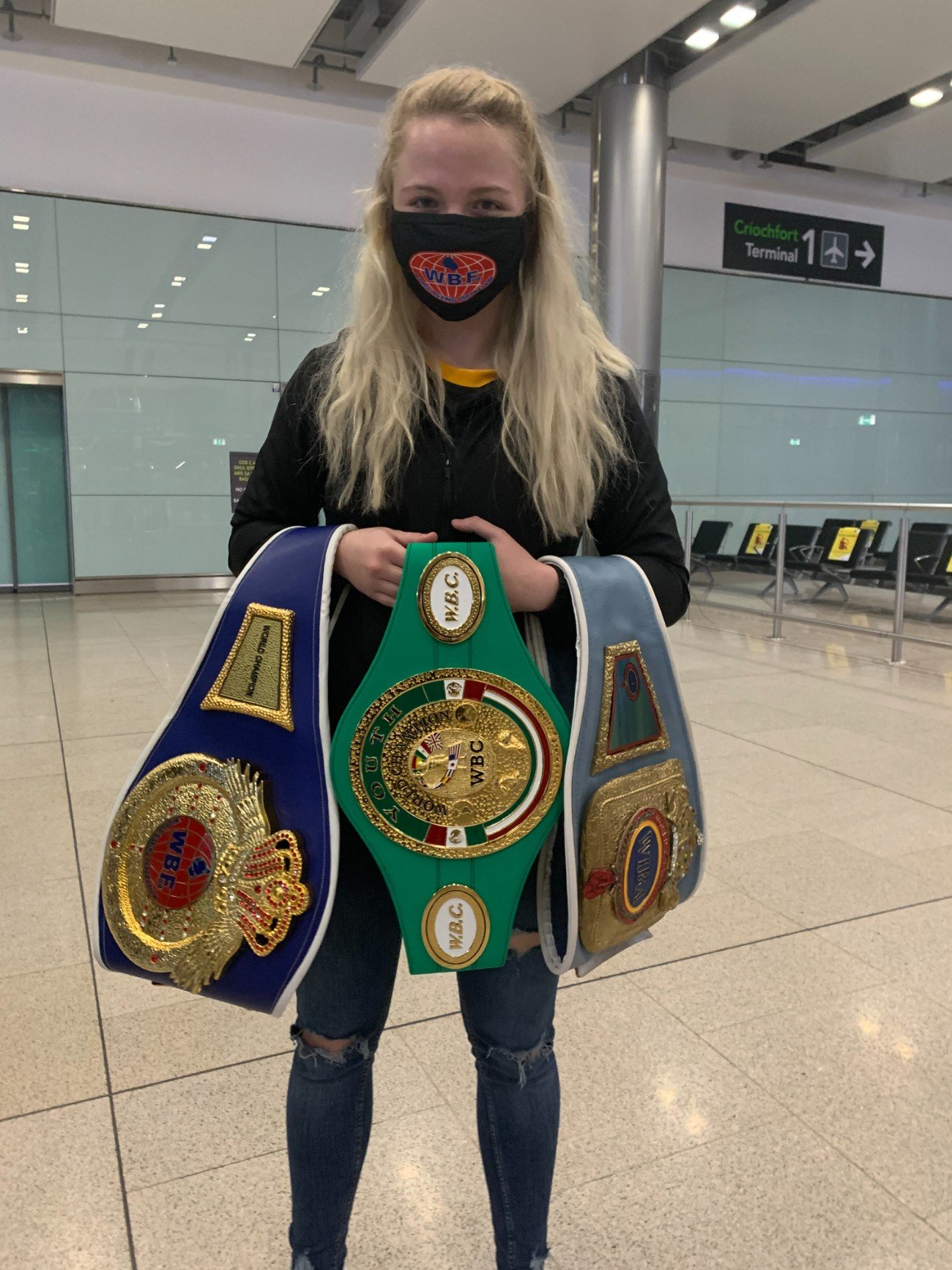 It was one of the most unbelievable performances I’ve seen first-hand. It goes even further than that too because of her age and that she’s only had a couple of fights as a pro. She was unbelievably composed, she was so cool in the lead-up to it, and then she executed the gameplan like a professional that’s been 20 years in the game.”

Gunning is already plotting ‘The Smiling Assassin’s’ next move and is predicting a glorious future for Ireland’s youngest female pro. He outlines how “the belts, fantastic, they’ll be a massive ego-boost for herself but she’s only going to get better from there, that’s only the start of what she has.

She can develop a lot more, she could come down a weight, she might even come down two weights. Her punching power and her strength, if she comes down weights, I don’t think there’s anybody in the world that could last the distance with her.

She’s got devastating heavy hands, brick fists that could end contests at elite level. We’ll be looking to take a little break and then move down in weight and maybe challenge for similar level titles and then push on for a world title with a big promoter.”