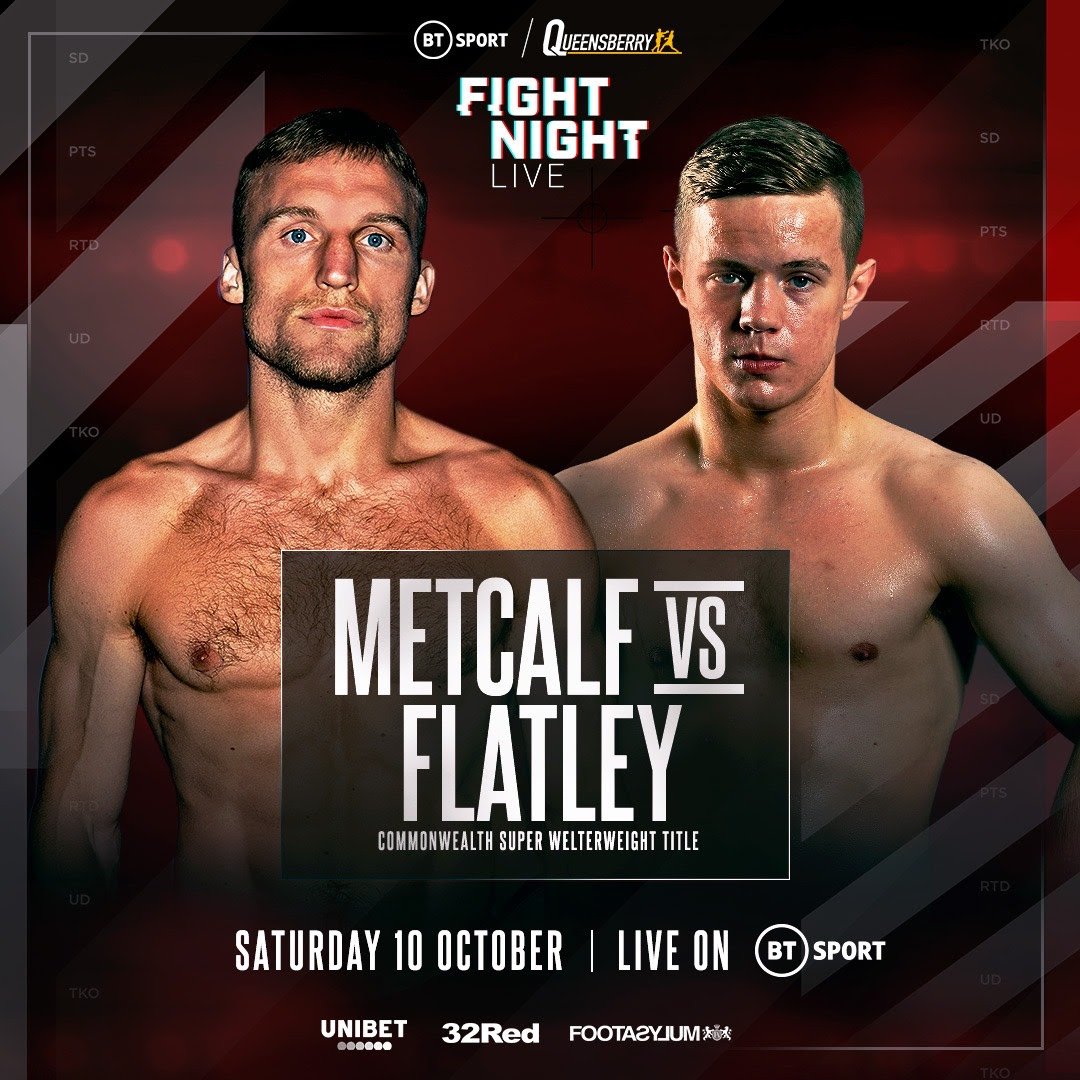 Queensberry Promotions, in conjunction with the BBBofC, can confirm that two positive tests have been returned after the most recent batch of testing carried out by Prenetics.

The positive tests have come from the camps of boxer’s Jack Flatley and Dan Booth, although both Boxers tested negative themselves.

Consequently, the scheduled bout for the Commonwealth Super-Welterweight Championship between JJ Metcalf and Jack Flatley and the undercard bout between Micky Burke Jr and Dan Booth have now been cancelled in line with the protocol of the British Boxing Board of Control and the Promoter.

The rest of the show’s participants, who have all been isolating at a London base this week have tested negative and the show, being headlined by Liam Williams and Andrew Robinson for the British Middleweight Championship, will continue as planned.

A Queensberry spokesman said; “Whilst it is unfortunate that two corner-men have tested positive it shows that the superb protocols and safety measures put in place for the sport works. These excellent measures have, of course, been carried out so to preserve the safety of everyone involved in the event and of course we wish those affected well.”

JJ METCALF is ready to start making up for lost time and wiping out the British Super-Welterweight division, with Fowler, Fitzgerald and Flatley high on his F heavy hitlist.

Queensberry Promotions supremo Frank Warren is meeting Matchroom boss Eddie Hearn in the near future to discuss the promotional rivals boxers facing each other.

And one of the potential mouthwatering clashes is a local derby between Warren’s Commonwealth Super-Welterweight champion Metcalf and Matchroom-backed Fowler.

British champion Scott Fitzgerald has been ordered to defend the title against Metcalf, but the domestic title holder’s future is uncertain.

That could clear the path for Metcalf to face Fowler for the vacant British crown in a battle that would split Liverpool fight fans.

Metcalf is an Everton fan and Fowler supports Liverpool.

Metcalf who is ranked at five in the IBF rankings for Jermell Charlo’s world title said: “Fighting Fowler would be brilliant for Liverpool and capture the imagination especially as we’re both going well in our careers.

“A fight against Fowler in Liverpool is a big fight, and hopefully that comes off, but I would prefer to fight Scott Fitzgerald, right now.

“The reason I’d rather fight him than Fowler is that he is the British champion. I’d rather beat a champion than fight Fowler for the vacant title.

“Fitzgerald has beaten Fowler and Ted Cheeseman so it would be a better win for me, but I still have to get over Jack Flatley.

“I don’t know what the issues are with Scott, but he should start defending or relinquish the title.”

In the meantime, Metcalf is under no illusions about the ability of Flatley who he knows well having sparred “30 or 40 rounds.”

Flatley is always in thrillers and his brutal draw against Troy Williamson in June 2018 was one of the best fights seen in a British ring that year.

Hand injuries have caused Metcalf’s career to stall and since his title winning performance when he stopped Jason Welborn in June 2019, he has boxed just once.

On that occasion in February, Jan Balog was stopped in just 32 seconds.

Metcalf, the son of former top pro Shea Neary explained: “Before the Welborn fight I broke my hand quite badly and needed an operation, so I rolled the dice with that fight and took it.

“I had the operation afterwards and it took time to make a full recovery.

“I am not worried about the hand.I think it will be okay when I defend the title against Jack and it will work out okay on the night.

“I’ve been using it in sparring and it has felt okay so I am not worried. I think this operation has sorted it out.

“I’ve done loads of sparring with Jack and not even long ago either. The last time would have been last year. I know his style and how he will go about the fight.

“He is tough, strong, fit and throws a lot of shots. It will be a tough fight and no walk in the park.

“I could have done with a few more rounds since I won the title, but I have done good sparring and I’m prepared.”

Nathan Gorman is back in action in an exciting Commonwealth Heavyweight title eliminator against Ghana’s Richard Lartey.

« Devin Haney: Yuriorkis Gamboa is the toughest test of my career