Devin Haney: Yuriorkis Gamboa is the toughest test of my career

By Chris Williams: Devin Haney (24-0, 15 KOs) knows he’s facing the toughest test of his career next month in defending his WBC lightweight belt against Yuriorkis Gamboa (30-3, 18 KOs) next month on November 7th on DAZN and Sky. Haney-Gamboa will be taking place at the Seminole Hard Rock Hotel in Hollywood, Florida.

Haney, 21, hasn’t faced anyone remotely as talented as the former IBF/WBA featherweight champion Gamboa, and there’s no way of knowing if he’ll win this fight or struggle and lose.

All we have to go on is Haney’s performance against Alfredo Santiago last November to predict the outcome for the Gamboa match. Haney admits that he’s facing the hardest fight of his career in taking on the 38-year-old Gamboa, but he believes that he’s going to make a statement.

Devin says that by beating the 2004 Olympic gold medalist Gamboa, he’ll be able to “showcase” his talent to the world. Showcase fights are usually mismatches involving fighters that have no business being inside the ring with an A–level fighter.

Gamboa isn’t at the level where he’s considered a showcase opponent. He’s someone that has a chance of winning this fight or, at the very least, makes Haney look bad in winning.

“Gamboa is a tough opponent; he’s been in there with the best. He hurt [Terence] Crawford. He landed a good shot and hurt Crawford,” said Haney to IFL TV. “I can’t underestimate his power,” said Devin about Yuriorkis Gamboa.

“In his last fight, he went 12 rounds with Tank [Davis], so he’s durable, hungry, and I can’t underestimate him. At first, I was a little shaky about it,” said Haney in fighting without fans behind closed doors.

“I didn’t know how it was going to be, but ever since I’ve seen other fighters do it, I’m excited about it. And I feel like I’m going to be able to relax more, and it’s going to be more closer to a sparring match.

“Gamboa is the toughest test up to this date for me,” said Devin. “Gamboa is a veteran; he was a unified world champion, a two-time Olympic gold medalist. So Gamboa is no slouch, and he’s the best name on my resume so far.

“My dad is excited about this fight [with Gamboa],” Haney said. “He knows that Gamboa is a tough test. He knows I can’t take him lightly. Gamboa isn’t coming to lie down.

“I’m very excited to be back. It’s almost been a year [11 months] since I’ve been off. I’m very excited to make my return, and I’m looking forward to putting on a good show for the people watching on TV,” said Haney on his title defense against 38-year-old Gamboa.

It goes without saying that Haney is fighting the toughest opponent of his five-year pro career in taking on Yuriorkis.

Gamboa likely beats all of those fighters and does a better job of doing it than Haney did. You can argue that if Gamboa had fought the same 24 guys that Haney has in his career, he would have an unbeaten record as well at 24-0, but with a lot more knockouts. 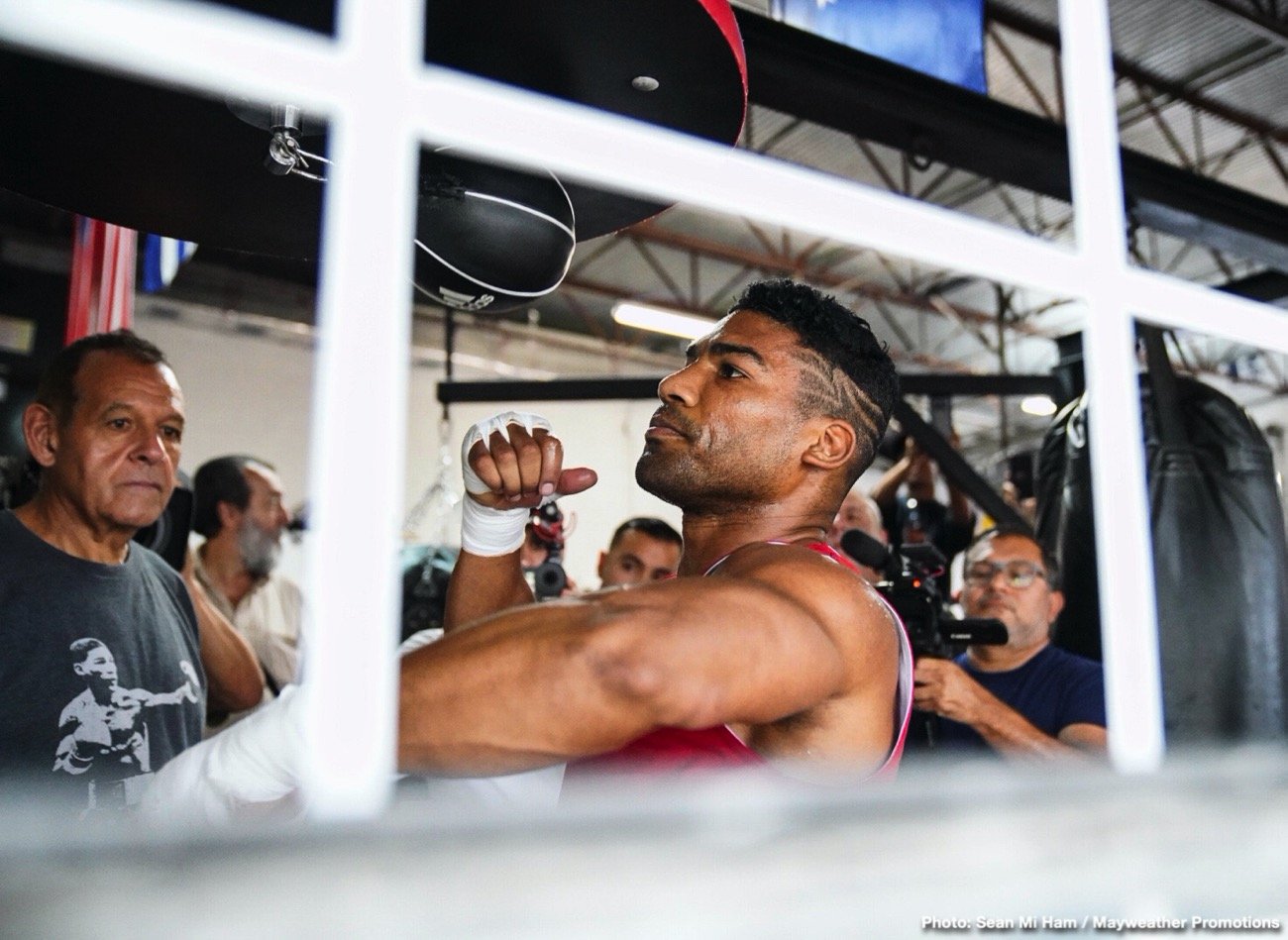 It wouldn’t be surprising if Gamboa would have a 24-0 record with 22 knockouts if he’d fought the same fighters Haney has.

Haney not worried about getting a knockout

“I literally just talked to him before we got on the phone,” Devin said about Matchroom Boxing promoter Eddie Hearn. “We just talked about the venue [for the Gamboa bout] and stuff like that. I’m trying to get another one of my fighters on the card.

“I can’t make no promises,” said Haney about whether he’ll knockout Gamboa. “And I can’t promise a great performance. I want to go in there and showcase my full arsenal.

“If the knockout comes, hopefully, it does come, then I’ll be happy about that. I’ll go in there and display of everything that I have. I think the fans will be pleased with that alone,” said Haney.

Haney’s lack of power would make it a mistake if he goes after Gamboa and attempts to knock him out on November 7th. That would be playing into Gamboa’s strengths, as he can punch, and he’s got the better hand speed of the two.

Gamboa is also the superior combination puncher of the two, and Haney would be barking up the wrong tree in trying to knock him out. If Haney jabs and throws enough pot shots all night, he may score a knockout by wearing Gamboa out. It isn’t very likely, though.

He’s failed to knockout nine of his opponents, and most of them were lower-level fighters. If Haney wasn’t able to knock out lesser fighters than Gamboa, then he’ll be wasting his time trying to get him out of there.

“Gary Russell came with every excuse in the book,” Haney continued. “Time after time, it would be something after something. That’s why I gave him the nickname, ‘Mr. Cap.’ He was all cap.

“In reality, he didn’t want to fight me, and the fans saw that me and my side were trying to make the fight happen. In reality, he was just a lot of talk—a lot of bark with no bite. Hopefully, the fight can happen.

“The fight could happen now if it were up to me, but on his side, I can’t speak for them,” said Haney.

Gary Russell Jr has a different version of what happened with the negotiations with Haney. He says he sent the offer back to him with the things he wanted, and he gave them a deadline. If the fight didn’t get made, it suggests that Haney’s team wasn’t interested in giving Russell Jr what he was asking for.

Even while the negotiations were going on between Haney and Russell, Devin’s promoter Eddie Hearn had already jumped the gun by saying that Gamboa was the guy they were looking to fight on November 7th.

Hearn had already revealed his hand by saying that Gamboa was the guy they wanted for the fight. So whatever Russell Jr sent back to Haney, it didn’t matter. Haney’s management had already decided that he would fight Gamboa in his next contest.

“He should,” said Haney when asked if Gervonta ‘Tank’ Davis will beat Leo Santa Cruz on October 31st. “Leo Santa Cruz is a veteran of the game, and he’s no slouch. You can’t sleep on him, but he is also coming up in weight. I am interested in seeing how he holds up against Tank.

“I see Lomachenko being too much for Teofimo,” said Devin. “You cannot sleep on Teofimo. He has the punching power to change the night at any given moment, but I think Lomachenko is just too much.

“I think Ryan [Garcia]. I like Ryan in that fight,” Haney said in predicting that Ryan Garcia will beat Luke Campbell in their fight in December.

“And I would say, Tank,” Devin said when asked who he would pick to fight from this list: Ryan Garcia, Gervonta Davis, and Teofimo Lopez.

“I don’t know if that’s real, so I don’t want to speak on it,” Haney said about the rumors of Floyd Mayweather Jr vs. Logan Paul. “We could talk about some fantasy stuff.

“That’s a good fight [Manny Pacquiao vs. Conor McGregor] because it brings more attention to boxing. “Of course, Pacquiao will be victorious. He should beat him very easily,” said Haney. “It’s a good fight because of cross-branding or whatever.

Haney’s choice of Ryen Garcia to beat Luke Campbell is one that many fans would disagree with. They overwhelmingly see Campbell (20-3, 16 KOs) as too experienced for Ryan to handle.

Leo Santa Cruz has got his hands full in taking on Gervonta ‘Tank’ Davis on October 31 on Showtime PPV. Haney is making a logical pick in choosing Davis to beat Santa Cruz.

That’s a given, which is why it’s a poor fight to place on Showtime pay-per-view. Everyone knows who will win the fight, and they’re not excited at paying to see it, especially if it’s priced at over $70 on PPV.