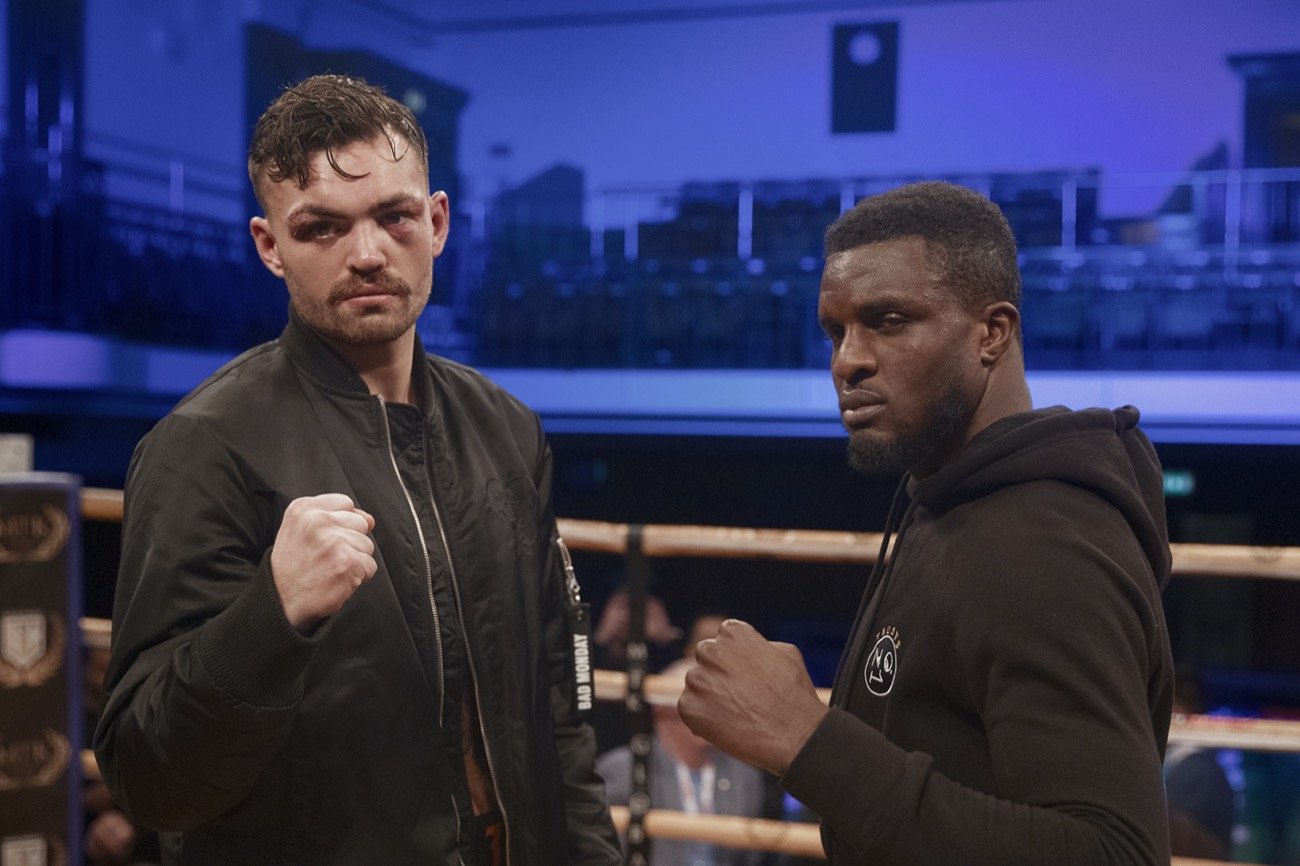 Bitter rivals Tyrone McKenna and Ohara Davies exchanged heated words as they weighed in ahead of their highly-anticipated #GoldenContract super-lightweight final on Wednesday.

The fighters took part in the weigh-in on Tuesday, with free to use images available HERE (please credit MTK Global), and the weights and running order listed below:

Davies: I’ll grab this opportunity with both hands

Ohara Davies says that Tyrone McKenna has never fought anybody like him ahead of tonight’s massive #GoldenContract super-lightweight final.

Davies (21-2, 16 KOs) is in an extremely confident mood ahead of the highly-anticipated battle with McKenna (21-1-1, 6 KOs), and insists he won’t let the opportunity slip away.

Davies said: “This will be the biggest win of my career and I’m going to grab this chance with both hands. I’m not even thinking about it as a tournament anymore, I’m just treating it as a one-off must win fight against McKenna.

People see me as a loudmouth that talks trash, and people seem to forget that I can fight and box. People get in the ring with me and think it will be a lot easier than it is. They think that all they have to do is get out of the way of my right hand, but then the right hand still hits you.

“You don’t realise until you get in the ring how good I am. That’s what McKenna will experience. It will be a hard night for him as he’s been in there with nobody like me.

“When I’m in the shape that I’m in now, I’m unbeatable and unstoppable. When I’m focused, there isn’t anyone in the world that can match me.”
Tyrone McKenna has warned Ohara Davies that his other distractions will be what causes his downfall during Wednesday’s huge #GoldenContract super-lightweight final.

McKenna (21-1-1, 6 KOs) feels that Davies (21-2, 16 KOs) is focusing on everything else but him ahead of their battle tomorrow, and the Belfast man feels that is going to be a big mistake.

McKenna said: “I’ve been driven by one thing, and that’s fighting Ohara Davies and winning the Golden Contract. It seems like he’s been focused on a lot more than just Tyrone McKenna, and that’s going to be his downfall.

“We had the face-off interview on Monday, and I don’t even think he knew who he was coming down to face off with. Whether it was Anthony Fowler, Florian Marku, Sam Jones, or whoever else he’s been kicking off with on Twitter. He’s having arguments with everybody but me. He’s fighting me but he’s not acting like he is.

“I’m not underestimating him. I still think he’ll bring his A-game and I’ll bring mine. There is a massive opportunity with this Golden Contract and I won’t let that slip.

“I’m not going into this fight thinking it’s a grudge match and that I hate Ohara Davies. If I do this then I’ll let my emotions get the better of me and I’ll get stuck into a war that I shouldn’t be in. I’ll stick to what Pete Taylor tells me to do.”

Following the results of the COVID-19 testing, the fight between Jazza Dickens and Ryan Walsh has unfortunately been postponed due to positive tests for Dickens and his trainer Derry Mathews.

All health and safety protocols regarding social distancing were followed in relation to the guidelines put in place by the British Boxing Board of Control, with no other fighters on the bill testing positive.

MTK Global will continue to monitor the situation as the health and wellbeing of all involved is our utmost priority.

Dickens and his team have immediately left the fight bubble, with the show proceeding with the remaining five fights on the card.

« Jermall Charlo being avoided by Canelo Alvarez and Gennady Golovkin?