Jazza Dickens vs Ryan Walsh, Davies vs McKenna on Sept. 30, LIVE on ESPN+ 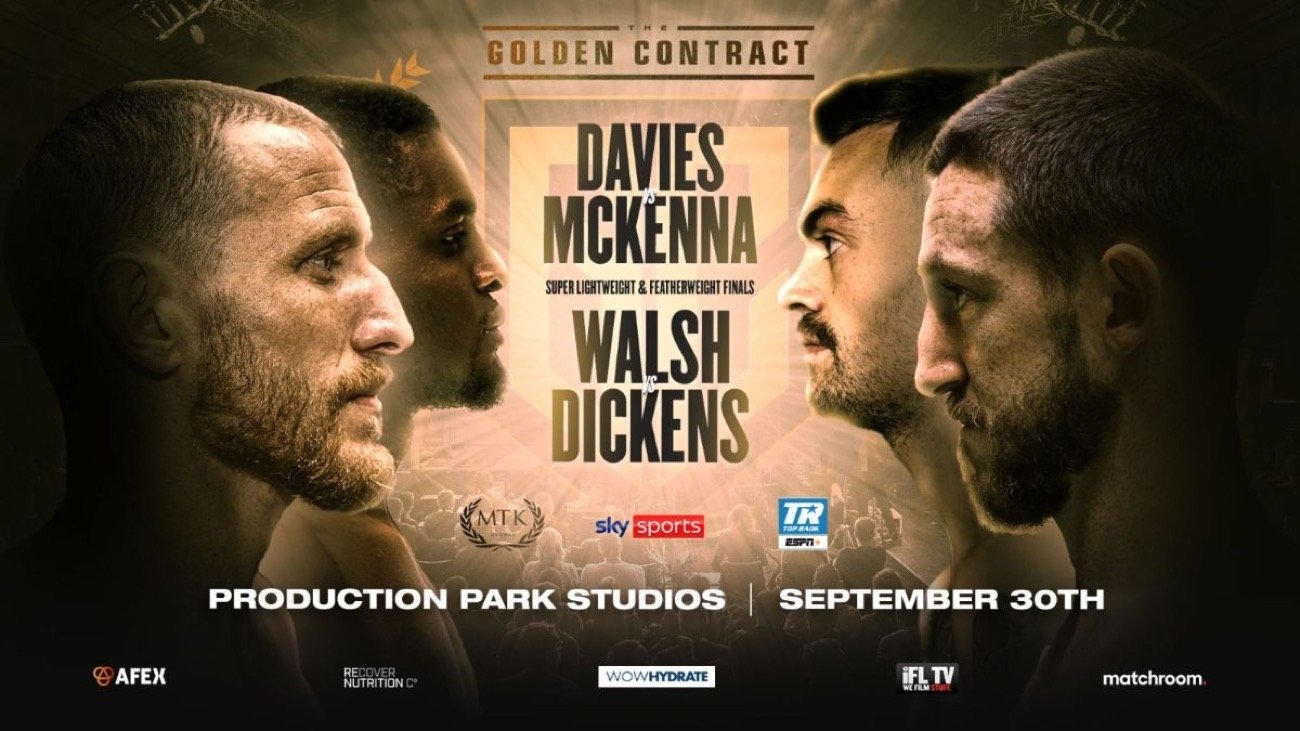 Here’s what’s in store when the championship combatants fight behind closed doors.

Ryan Walsh (26-2-2, 12 KOs) vs. James “Jazza” Dickens (29-3, 11 KOs)
Featherweight
Walsh has run roughshod through the featherweight bracket, toppling Hairon Socarras by ninth-round stoppage and knocking down Tyrone McCullagh twice en route to a decision victory. A former British champion, Walsh has not tasted defeat since October 2016. Dickens has won seven in a row since back-to-back losses and won a majority decision over Leigh Wood in their semifinal bout.

Ohara Davies (21-2, 16 KOs) vs. Tyrone McKenna (21-1-1, 16 KOs)
Super Lightweight
Davies entered the tournament coming off a controversial decision over former world champion Miguel Vazquez, but the former English champion has appeared revitalized. He knocked out Logan Yoon in seven rounds in his quarterfinal match and stopped Jeff Ofori in six rounds to advance to the championship. McKenna, from Belfast, bested French contender Mohamed Mimoune in the semifinals via decision.

In other action on ESPN+:

Ryan Walsh knows that his upcoming fight with Jazza Dickens could make or break his career ahead of their #GoldenContract featherweight final showdown later this month.

Walsh defeated Hairon Socarras and Tyrone McCullagh to reach the final, but he knows that the stakes are at an all-time high against Dickens.

Walsh said: “This is do or die. This is my life and everybody that knows boxing knows that this is going to be a good fight.

“The delay has meant we’ve had more time to look at Jazza, and we’ve been lucky enough to get good sparring in to mimic different aspects of him.

“Even with everything going on over the last few months, I never got out of the swing of things. I was always running in the morning or evening, and training throughout the day, so it hasn’t affected me and I’m more than ready.

“The fight deserves a crowd, and it would have been greater with a crowd, but it won’t define me one way or the other and I’m going to win.”

The #GoldenContract featherweight final takes place on the same night as the super-lightweight final, as Ohara Davies faces Tyrone McKenna, while that evening also sees a light-heavyweight semi-final between Liam Conroy and Serge Michel on the undercard.

The other light-heavyweight semi-final sees Hosea Burton travel to Latvia to take on Ricards Bolotniks on September 26, with that fight broadcast live on IFL TV.

The 29-year-old Dickens will be looking to pick up his 8th consecutive win since losing back to back fights to Thomas Patrick Ward and Guillermo Rigondeaux in 2016 ad 2017.

Dickens has looked a lot better since losing those fights in beating these fine fighters:

While some fighters may struggle with the prospect of fighting in front of no fans, Jazza Dickens feels some of his past fights experiencing that scenario makes him more than ready for his #GoldenContract featherweight final with Ryan Walsh.

It’s been a rollercoaster of a career for Dickens, which has involved fighting in various venues throughout the UK, along with time spent out in the Dominican Republic and Miami, and he feels those past adventures gives him an advantage ahead of the highly-anticipated behind closed doors showdown.

Dickens said: “I travelled the world as an amateur fighting in quiet sports halls, and I boxed in the Dominican Republic in front of ten people three years ago.

“I’ve also boxed in empty arenas as a professional. I was on after the main events as the live float for the Hatton vs. Senchenko fight, and Price vs. Thompson. One hour earlier those arenas were packed.

“In one fight I got told ‘you will be paid but you won’t fight.’ I told them ‘I need to fight, get me on!’ The lights went out before the decision and people were brushing up around the ring.

“In the Dominican Republic three years ago in front of 10 people, I realised why I do it and why I love it so much. It was a real fight, a ‘straightener’ as we call it in Liverpool.

“As always I’ll fight my fight and I’ll give 100%. This is a once in a life time chance. There might be no crowd, but big money is up for grabs.”

The #GoldenContract featherweight final takes place on the same night as the super-lightweight final, as Ohara Davies faces Tyrone McKenna, while that evening also sees a light-heavyweight semi-final between Liam Conroy and Serge Michel on the undercard.

The other light-heavyweight semi-final sees Hosea Burton travel to Latvia to take on Ricards Bolotniks on September 26, with that fight broadcast live on IFL TV.

« Adrien Broner to fight Ivan Redkach in January at 140

Hearn says Joshua vs. Pulev will still go ahead without fans on Dec.12 »