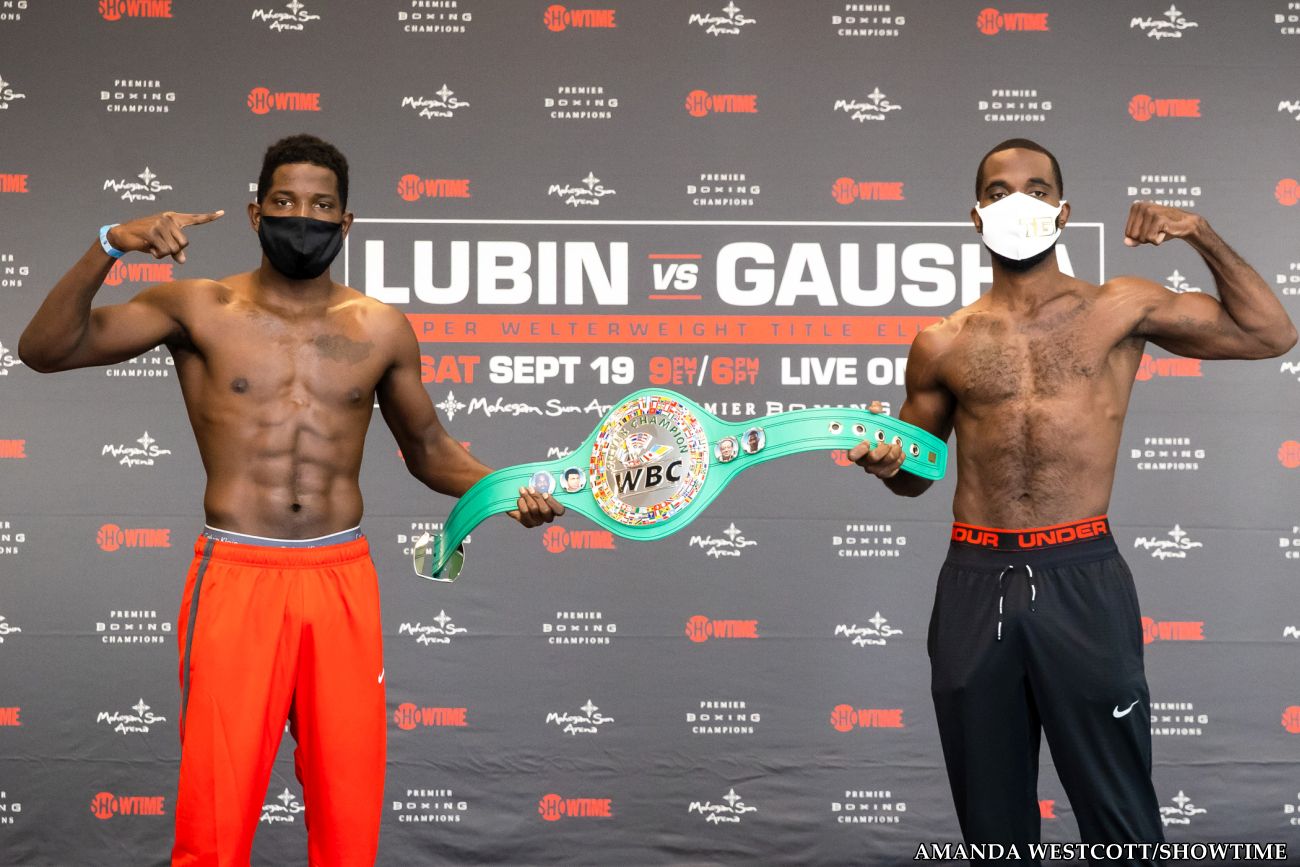 By Kenneth Friedman: #1 WBC Erickson “Hammer” Lubin is taking on Terrell Gausha tonight in a WBC 154-lb title eliminator on Showtime Boxing at the Mohegan Sun Arena in Uncasville, Connecticut. This is a crossroads fight for both of these fighters, who hadn’t handled it when they attempted to take their careers to the next level.

Lubin (22-1, 16 KOs) is the favorite to beat the 2012 U.S Olympian Gausha (21-1, 10 KOs), but that doesn’t mean much. When Lubin tried stepping it up three years ago against WBC junior middleweight champion Jermell Charlo, he was poleaxed by a right hand from the champ and knocked out.

It’s taken Lubin, 24, all those times to finally get in position to lock himself in as the WBC mandatory, and he can’t afford to blow it. If Lubin wins tonight, he’ll be assured of a title shot against the winner of next Saturday’s unification fight between WBC champ Jermell and IBF/WBA champion Jeison Rosario.

Lubin insists that he’s improved since his loss to Charlo, but he hasn’t faced the level of opposition that would prove that. His wins in the last three years have come against these fighters: 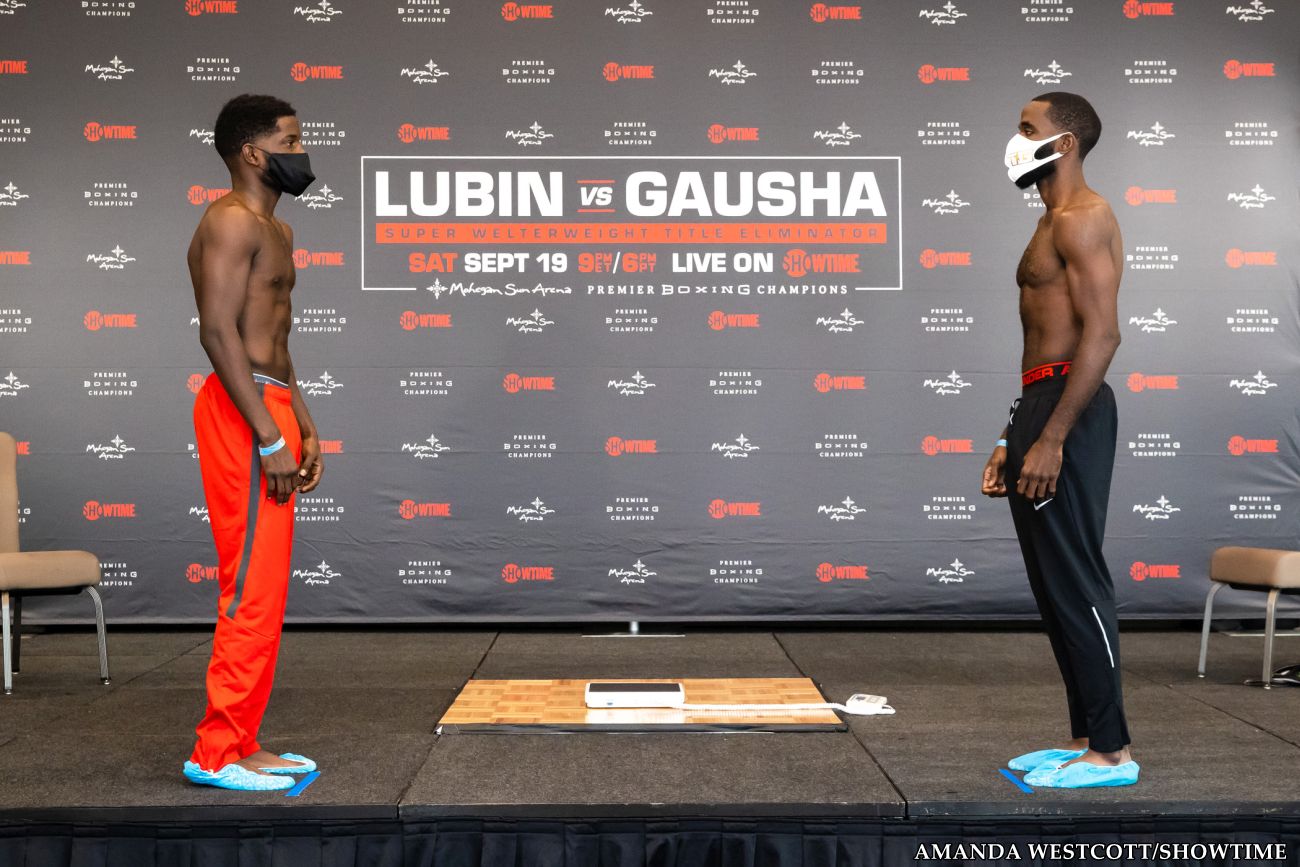 Erickson has learned from his loss

“I did some studying of the Lara fight, the Trout fight, and a few other fights, but mostly by trainers look into that more than I do, but I saw what I needed to see,” said Lubin about his opponent Gausha. “My trainers have seen what they needed to see, and we got a game plan, and we’re ready to execute.

“A little bit of both [Gausha struggling against southpaws and good fighters. Gausha has problems with southpaws, but I’m not looking at that. I’ve got a game plan, and I’m ready to execute and come out victorious.

“I definitely want to win, and I want to come out there and win in style. I want to look good winning, and that way, we leave behind a good report.

“It’s something to learn from, and it’s also disappointing because I dared to be great,” said Lubin about his first-round knockout loss to Jermell Charlo in 2017. “I want to be one of those fighters that win a world title early, but I definitely learned from it.

“Experience is a great teacher. I took that from that fight, and I bounced back, and I’m still bouncing in a great way. I’m soon going to take over this division. As far as my advantages, I feel I’m more determined than he is.

“I’m younger than him also. I feel like I got the edge in almost every department. Speed, power, footwork, defense, I feel like I’m a couple of steps ahead of him,” Erickson said.

In Lubin’s defeat against Charlo, he sent forward in the first round and was hit with a chopping right hand in their fight in 2017.

Had Lubin studied Charlo’s past fights, he would have known that this favorite punch is a hand that he throws in chopping down on his opponents.  Charlo typically isn’t a big puncher but can generate excellent power if you bend over in front of him the way Lubin did.

Lubin wants to make a statement

“All my wins are special to me,” Lubin continued. “It would be one more step to the title. I’ll be for the mandatory slot with the WBC, and after this, the sky’s the limit. I get to fight for not just one belt but three belts. Whatever happens.

“If I get the knockout, sweet, but I’m in shape, and I’m ready to fight 12 rounds and get the win. I know who I am as a fighter, and that’s why I walk around with my head held high, even after I lost because I knew I would bounce back.

And I needed to make a few changes in my life. I made the changes in a significant way, I bounced back, and I’m ready to take over the division. I trained hard for Charlo, but I just knew that I needed to bounce back. And I want to go out there and be my best, and me being my best, I always make a statement.

“I always look good when I go out there, and I’m at my best. I just want to come out with the win, and then we’ll take about what’s next. Everything is a process after a loss. I just made a few changes in my life outside of the ring, and I got with Kevin and got a stronger team,” said ‘The Hammer’ Lubin. 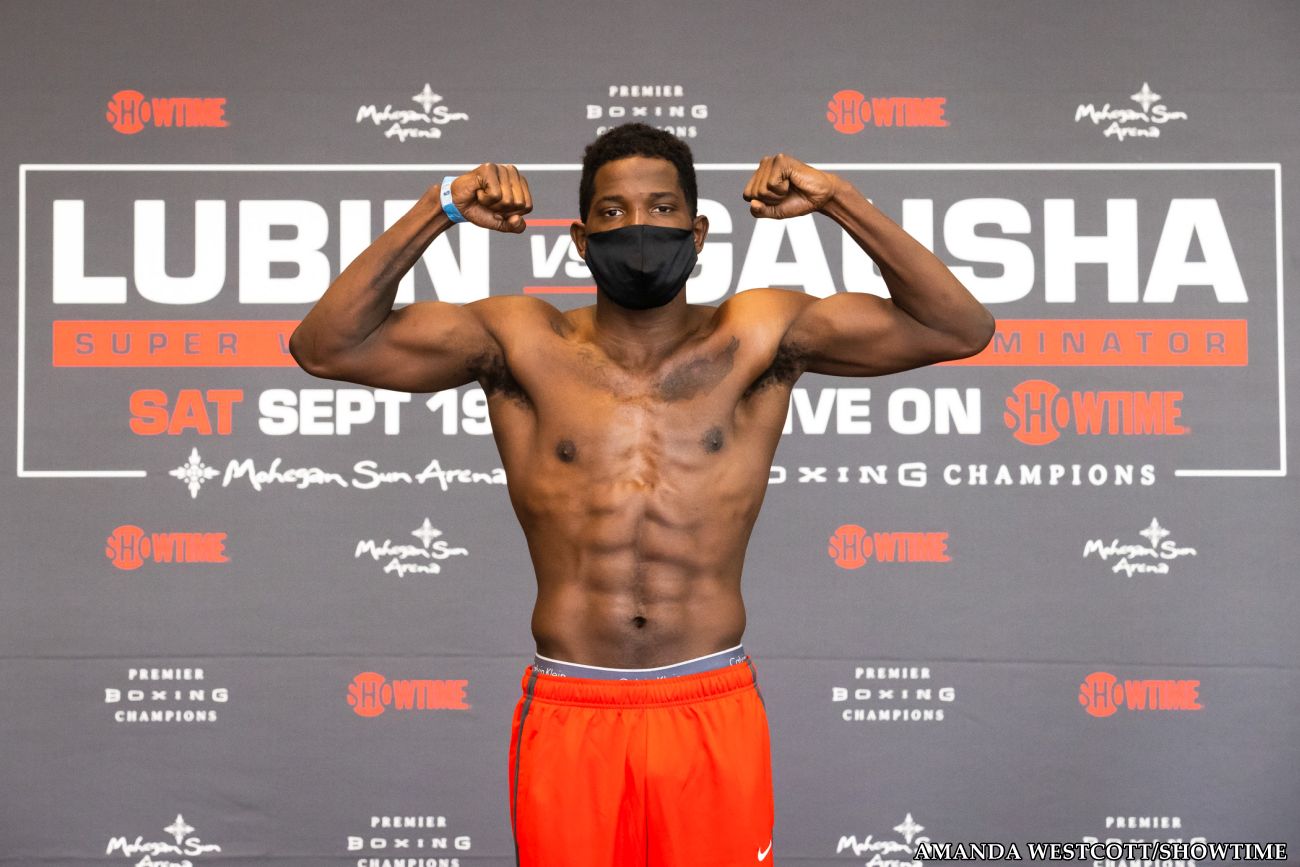 Gausha, 33, isn’t a big puncher, so we may not see if Lubin has improved or not. In this fight. Lubin will need to focus on more of his boxing if he wants to beat Gaushia because he’s got a lot of talent, if not power.

In Gausha’s last fight, he battled to a 10 round draw against former WBA junior middleweight champion Austin Trout in May 2019.

The WBC champ will have to vacate if they duck Erickson

“We worked hard in camp. My confidence has always been high, even after the loss,” Lubin said. “It didn’t break my confidence. I knew what I needed to bounce back, and that’s what I did. I kept training, and I stood the course.

“I’m #1 with the WBC right now. If none of those boys want to fight, then they’re going to have to give up that belt, the WBC belt. I’m sure those are tough guys, and they’re willing to fight anyone.

“After I take care of business, I’ll be looking to fight one of those guys, whoever comes out on top between Charlo and Rosario. We are going to get it on for all of those belts.

“There’s a lot of good up and coming fighters. No one specific, but I’ve got my eyes on everybody. I watch boxing from prospects, champions to Hall of Famers. I watch everybody,” said Erickson.

It’s doubtful that the Charlo vs. Rosario winner on September 26th will be thinking of avoiding Lubin. Charlo feels he can beat Lubin again if he’s forced to fight him again, and he’s not going to give up his best to avoid him. 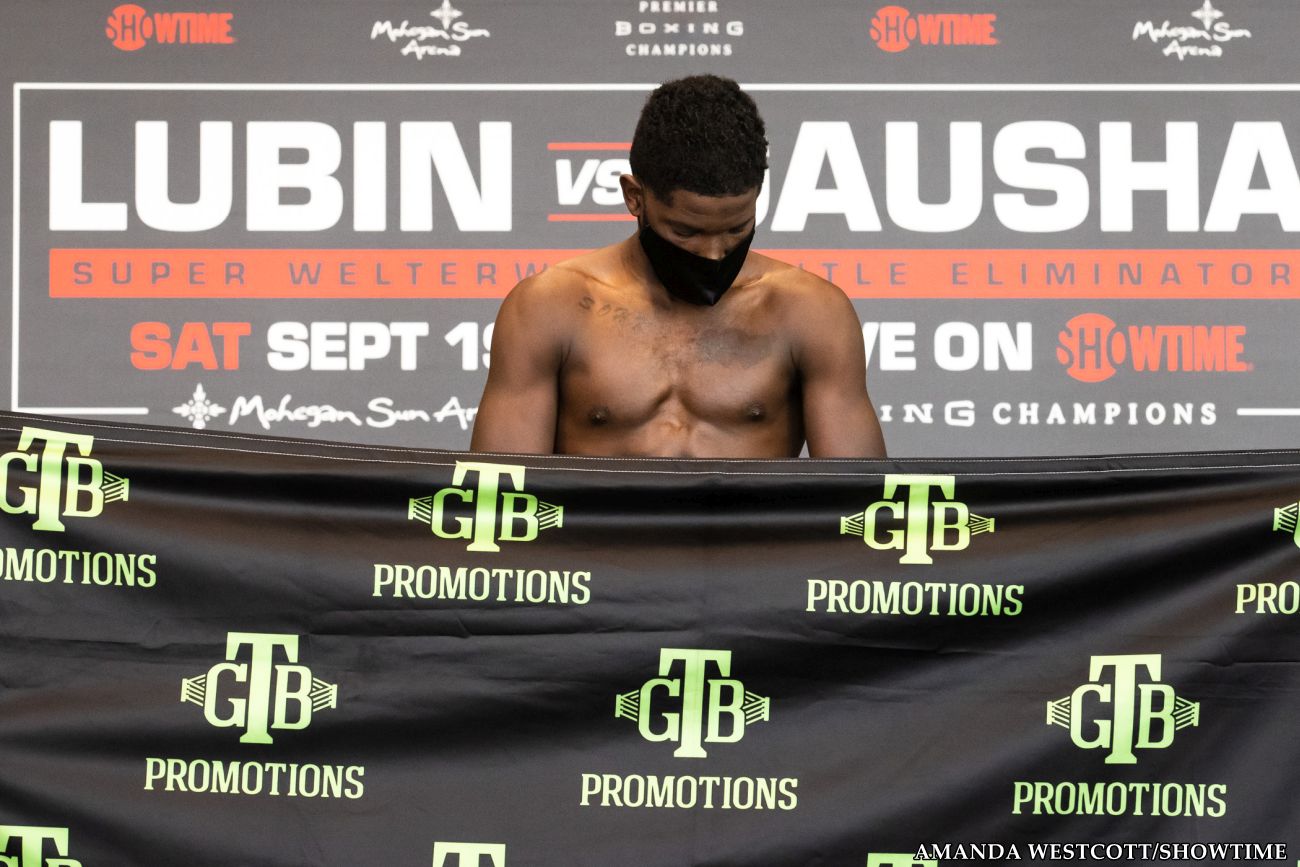 Lubin will likely need to take another fight before he gets a title shot against the Charlo-Rosario winner. The World Boxing Council is often slow about ordering champions to defend against their mandatory challengers.

If Lubin is forced to wait a year before getting a title shot, he’ll probably need to fight someone like Tony Harrison or Jarrett Hurd to keep busy.

Lubin’s fragile mandible should be sufficient for tonight’s contest against the light-hitting Gausha, so he should win reasonably easily without any hiccups. I see Lubin winning a 12 round unanimous decision by eight rounds to four [116-112] score.

As long as Lubin’s chin doesn’t betray him again, this will be a one-sided contest. For Gausha’s sake, he needs to sit down on his shots tonight if he wants to win because he’s not going to outbox the A-side Lubin. 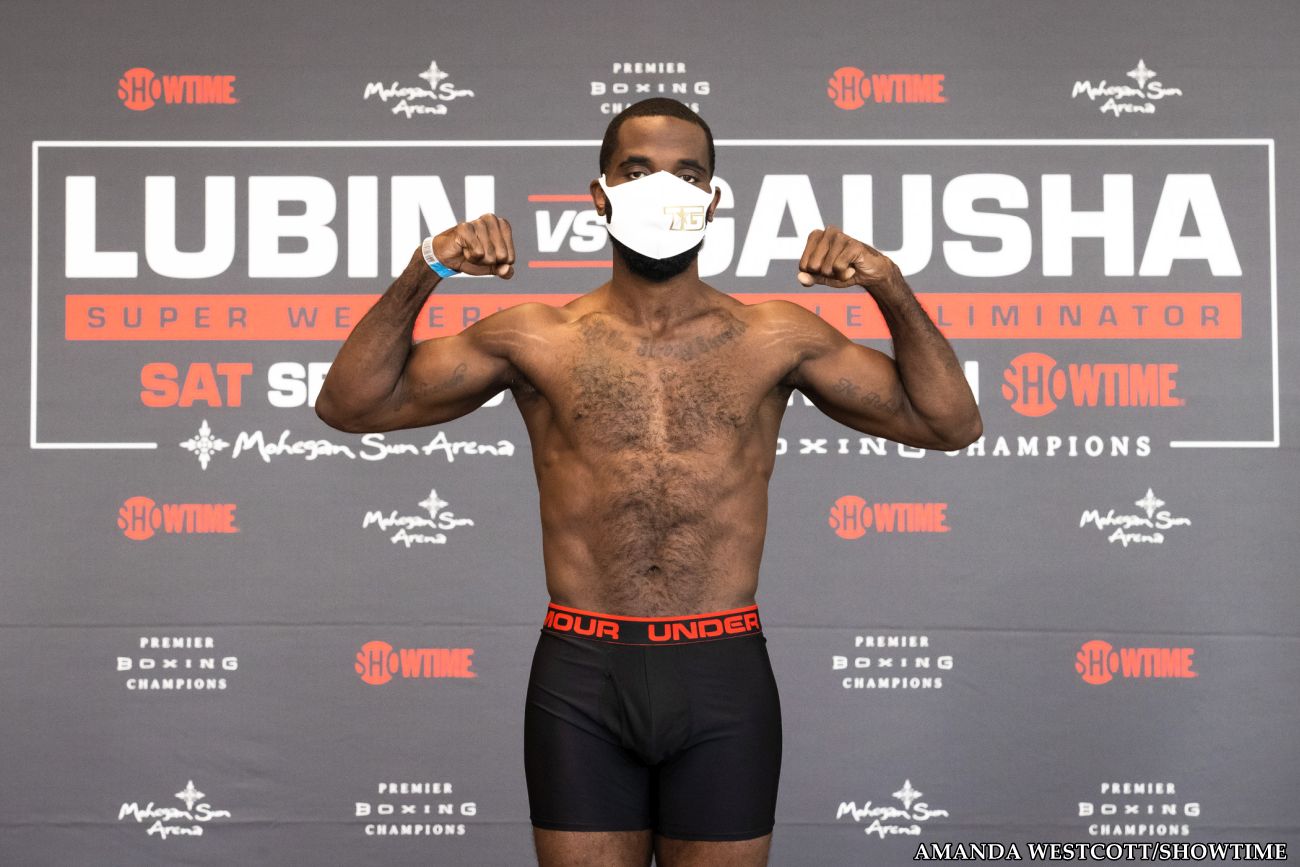 As long as Gausha goes into tonight’s fight, knowing that he needs to attach Lubin’s weak chin, he’ll have a shot at winning. He doesn’t hit harder than the guys that Lubin has been beating recently, which means it will be almost impossible to KO ‘The Hammer.’

WBSS Cruiserweight Final to be shown live on BILDplus in Germany »