Dilmaghani vs Ziani on Sept. 5, live on Channel 5 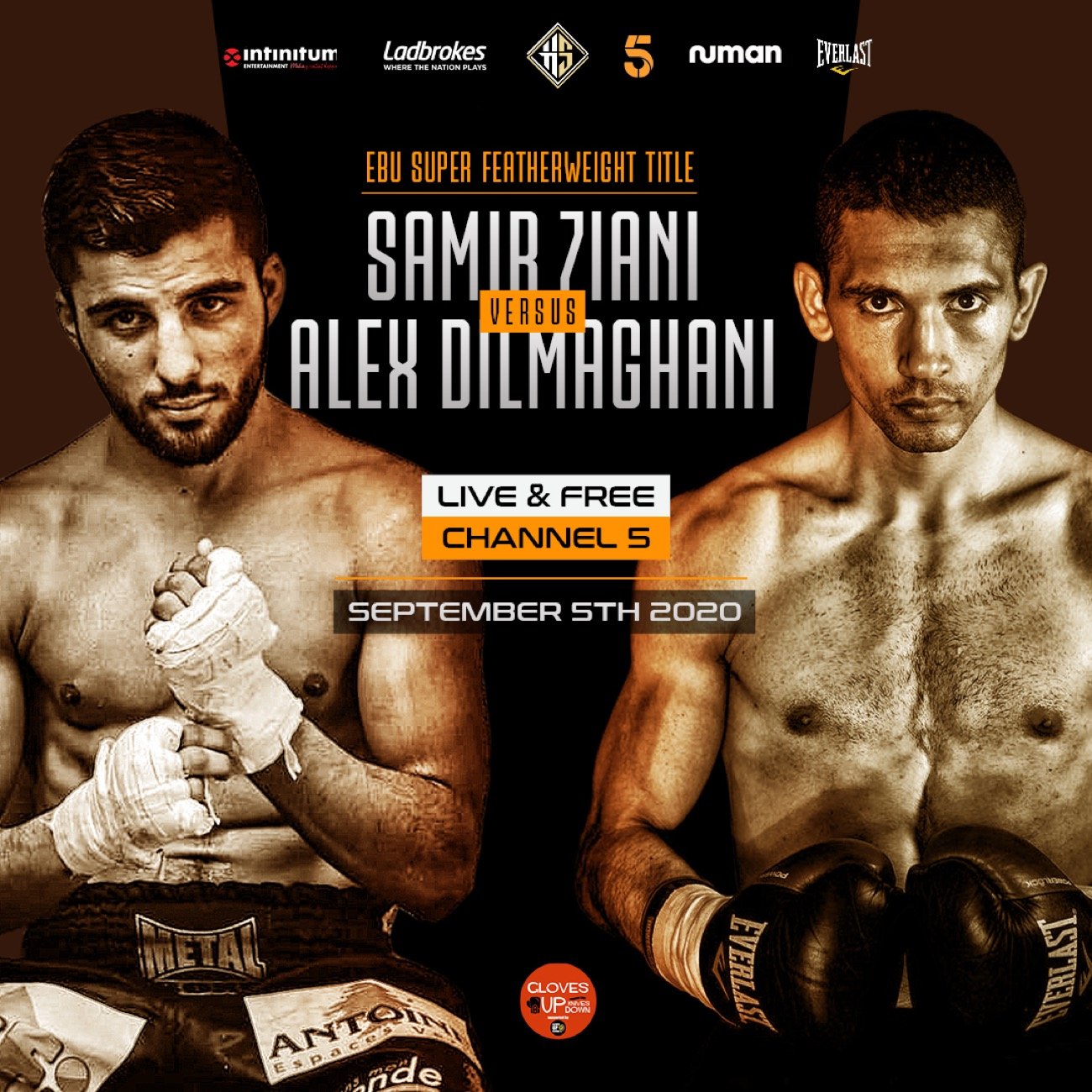 Alex Dilmaghani says he’s going for a real belt tomorrow night when he aims to tear the European Super-Featherweight title from Champion Samir Ziani in Wakefield, live on Channel 5.

The Crayford ace is determined to capture the traditional belt before moving on and fighting one of his rivals and is happy to go up or down in weight to face top Brits Carl Frampton or Josh Warrington.

Dilmaghani said, “There’s plenty of plastic belts to be got by beating numpties but this is an exciting fight, a world eliminator, for a beautiful, traditional belt that gets you ranked in the world top five with the WBC and, I think, the IBF.”

“Wins over top names mean even more to me than belts. Samir’s well respected, a warrior like myself. No one can accuse me of padding my record…..a rarity! A legitimate fight, for a legitimate belt and a legitimate ranking.”

He was due to fight Ziani back in April, but when the COVID-19 pandemic hit and the lockdown followed, the fight was postponed, but Dilmaghani put the time to good use and is now fully prepared to face the tough Frenchman.

“I’ve not found lockdown especially hard. I’ve had a relaxing time, catching up with family, movies, lots of reading. With stuff like Netflix and smart phones, this lockdown isn’t as difficult as one in prior eras might have been,”

“From a professional point, I’ve concentrated on more strength work plus fine-tuning my nutrition. I discovered allergies to eggs and bananas which I consumed almost on a daily basis but were causing stomach cramps,”

“Covid has shown the importance of maintaining good health. My weight is fantastic. I pretty much made fight weight at the check weigh-in yet I’m so strong, manhandling welterweights in sparring,”

“After doing some pad work at home with my brother, I’ve had eight weeks with my trainer Lee Wilkins. I’ve had great sparring with Ryan Walsh and Louis Greene,”

Ziani, a former French and WBC & WBA International Champion, is the most accomplished fighter Dilmaghani as faced so far, the 29-year-old will be making the second defence of his European crown and this will be his first pro-fight in the UK after previously fighting in Spain, Denmark, Morocco, Ukraine and Italy in his 35-fight career.

With only three points losses, the granite chinned Ziani has never been floored and one of his losses was to the to the big-hitting former IBF World Lightweight Champion Richard Commey in a very tight fight that some had Ziani winning.

Dilmaghani is well aware of the threat Ziani poses, but believes he is well prepared with the extra months to get ready in the southpaw versus southpaw battle.

He said, “Samir’s a very tough guy, throws lots of punches, applies lots of pressure. But, technically, I’m far superior as will be evident on fight night. He’s not that much more experienced when you consider that he’s fought three fellas three times,”

“I respect him and his team but thoroughly expect to take his belt and his rankings,”

“I’ve prepared for 12 rounds at a frantic pace but if I clock him clean – right place, right time – and see him hurt, I’ll take him out,”

“I had Christian Arrazola over three times in the first round, I had a landslide against Tuomo Eronen. I’ve fought plenty and always get plenty of southpaw on southpaw sparring to practise combinations which work best against southpaws,”

“You’ve just got to be professional. Besides, the beauty of ‘behind closed doors’ is it’s a level playing field. No one’s at home or away. It’s impartial, no crowd influence.”

Providing he comes through against Ziani, Dilmaghani hopes that promoter Mick Hennessy can secure him a world title fight next year.

“Mick’s an experienced and influential guy and, after maybe one defence, I’d definitely expect to fight for a world title next year, even if it’s behind closed doors,” Added Dilmaghani.

“I intend to win in style. Every world class fighter should aim to impress every outing,”

“Boxing is evolving. Now there’s ice chambers and ever improving nutrition. Careers go on longer – Bernard Hopkins is proof of that. I’m still young and fresh, 29 not 49!”

Samir Ziani vs. Alex Dilmaghani plus Isaac Chamberlain is exclusively LIVE on free-to-air Channel 5 on Saturday night from 10pm. Watch the whole undercard LIVE and free on the Seconds Out You Tube Channel youtube.com/secondsout from 6.30pm.

ALEX DILMAGHANI: “THE EUROPEAN TITLE IS A REAL BELT AND NOT LIKE A PLASTIC ONE PICKED UP BY NUMPTIES”

Presented by Mick Hennessy for Hennessy Sports in association with Ladbrokes, Infinitum, Numan and Everlast, the five-fight card to be staged behind-closed-doors at a purpose built TV production facility in Wakefield, also features the Southern Area Super-Flyweight Championship between Sammy Cantwell and Ricky Little; cruiserweight talent Isaac Chamberlain and fast-rising middleweight prospect Michael Hennessy Jr; plus a further name to be confirmed.

All-action Dilmaghani (19-1-1, 8 KO’s) was due to face Ziani (31-3-1, 6 KO’s) for the European title on April 25th, but the show was subsequently postponed due to the COVID-19 pandemic and Hennessy has worked hard to ensure that his charge still had his title challenge upon the recommencement of boxing.

Dilmaghani, 28, is raring to return to the ring and finally lay his claim on the prized European title. It will be almost a year since his last fight in November at the York Hall where he fought a thrilling battle against the Two-Time World title challenger Francisco Fonseca for the IBO World title that ended in a draw, but was one of the fight’s of the year.

The Crayford southpaw displayed his never-say-die warrior’s heart by fighting with a bad cut above his left eye from the ninth round, he pressed the fight and although it was very close at the end, many ringside observers felt that Dilmaghani had done enough to be given the decision.

He will need all that and more when he comes up against the solid and experienced Ziani from from Blagnac, France,

Ziani, 29, makes the second defence of his European title against Dilmaghani and it will be the first time he has fought in the UK despite having previously fought in Spain, Denmark, Morocco, Ukraine and Italy in his 35-fight career that has seen him capture the French and WBC & WBA International titles.

He won the vacant European title by forcing Spaniard Juli Gigner to retire in the sixth round in his Barcelona backyard last year and putting his title on the line against ‘Dilma’ holds no fear for him.

Ziani was last out in October when he made the first defence of the title over the Belgian challenger Faroukh Kourbanov with an unanimous points win. He has never been stopped in the three points losses on his record and one of those was to the big-hitting former IBF World Lightweight Champion Richard Commey in a very tight fight that some had Ziani winning.

Dilmaghani said, “It’s been a long and frustrating time to wait, but I’m so happy that Mick has worked hard behind the scenes to make sure the title fight stayed on and now I get my chance at the European title and it’s live on free-to-air Channel 5. Full respect to Ziani he’s coming over here to defend his title, but I will be relieving him of the belt. I can’t wait for it, it’s going to be great fight and real thriller for the viewers’ on Channel 5.”

Ziani said, “I’ve had plenty of extra time to prepare for Dilmaghani since the fight was postponed and I’m ready to fight him right now. I’ve boxed everywhere and in other fighters’ countries so fighting him in England does not worry me one bit. He is in for the fight of his life so I hope he has studied and prepared himself in the meantime because he won’t know what’s hit him.”

Hennessy added, “It’s a relief to finally announce the fight is back on between Samir and Alex and the European title will still be on the line. Like everyone, I was really looking forward to seeing this one in April, but due to the COVID-19 pandemic and the lockdown, it made it impossible to stage until restrictions had been eased. I’d like to thank Gary Hyde, The BBBofC, The EBU and Channel 5 for their input and foresight in keeping this fight together and with the aim of getting it on as soon as possible. I’m delighted that we’ve managed to deliver that and I’m sure their styles will make for a truly great fight on September 5th.”

The title fight will feature on the card headlined by Alex Dilmaghani’s challenge for the European Super-Featherweight title against Champion Samir Ziani, exclusively live on free-to-air Channel 5.

Bexleyheath’s Cantwell (7-1-1, 3 KO’s) was due to face Southampton’s Little (5-2-1, 1 KO), the Southern Area Champion, on April 25th in Crystal Palace, but the show was subsequently postponed due to the COVID-19 pandemic.

Sammy, son of Mickey, the popular 90s British Flyweight Champion and four-time World Title Challenger, is thrilled that the fight has been rescheduled and is ready to claim his first title. And Mickey will be also working Sammy’s corner on the night of the fight.

“It’s fantastic that Mick has kept the title fight and I can’t wait to get in the ring. It’s been a very challenging time for everyone, but I’m thrilled to still be fighting where many boxers aren’t able to return to the ring yet. It will be strange without a crowd as I have a massive fan base, but I’m going all out to take that title from Little,” Said Cantwell.

Little said, “I’ve kept in shape throughout as I knew the fight would eventually come off so I’m ready right now for Cantwell. He wants the title so I’m expecting him to come in fully fit and prepared because he’s in for the fight of his life if he thinks he’s taking my title.”

Promoter Mick Hennessy added, “This could turn out to be a war between the pair, they have the biggest hearts and fight at a frenetic pace which could prove to be a real exciting fight between them. The show is complete now with Alex’s challenge for the European title as the headliner which I also expect to be a real thriller as both men are fully charged-up for the fight. With Isaac looking to make a statement in his return, plus my son Michael, it’s a cracking show, live and free on Channel 5.”


« Cody Crowley vs. Josh Torres on Ugas-Ramos card on September 6