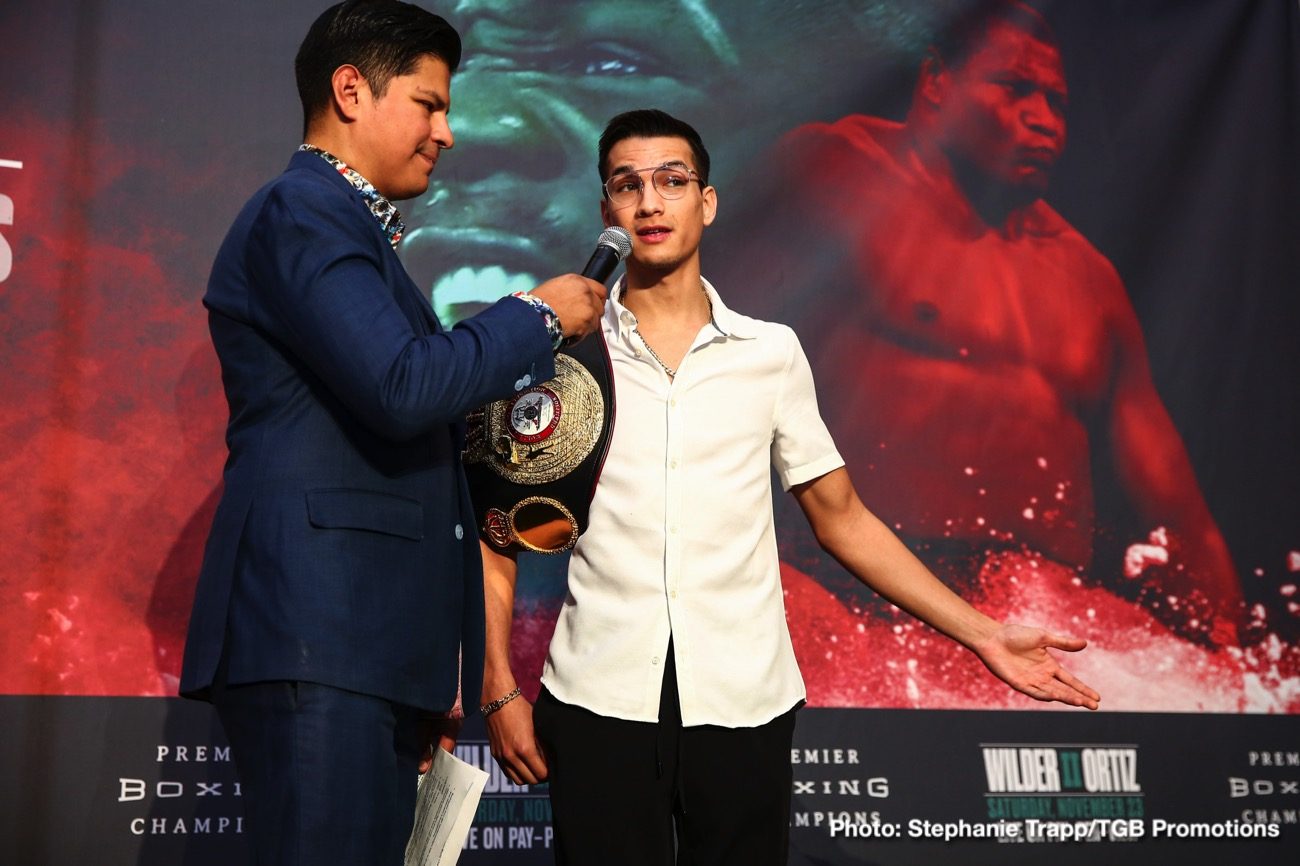 The 23-year-old Figueroa has begun to make a name for himself as a force in the 122-pound division and has moved past being known primarily as the younger brother of former champion Omar Figueroa. However, it is the encouragement and motivation he receives from his brother, in addition to his father and head trainer, Omar Sr., and his sister and strength and conditioning coach, Omayra, that has helped him get to this point.

“It’s great to have my family behind me because they understand what I fight for,” said Figueroa. “Especially in a career like this, it’s not easy, and they help me a lot both mentally and physically. I’m grateful that they support and push me the way that they do.

“Training camp for this fight has been going well. I’ve been sparring a lot with Omar Juarez and several guys from here in the Rio Grande Valley. We’ve just been helping each other out, keeping busy, and keeping the work rate up.”

Figueroa returns to defend his title after fighting to an exciting draw against Julio Ceja in a November clash. Figueroa is set on making up for what he sees as far from his best performance and believes that the extra rest time because of the pandemic will end up being an advantage.

“Heading into my last fight, I had some injuries that I was dealing with,” said Figueroa. “But with this pandemic and the quarantine, I got a chance to recover and fully heal. I’ve never had this much time between fights, so I feel great now, and I’m prepared for this fight. I’m just anxious to fight at this point.

“I don’t take anything away from Ceja, though. He came to fight. But we learn from every fight. What I took away from it was that even at the worst moment of my career, I didn’t lose. I’m a different fighter now, though. I’m healthy heading into this upcoming fight, and I feel like everyone is going to see a different type of Brandon Figueroa.”

Figueroa’s September 26 foe Vazquez has already stated that he plans to make their title fight a “Mexican war” full of toe-to-toe action. For Figueroa, no stranger to action fights himself; he sees that as playing into his hands.

“I feel like the action fighting has been my style and game plan since day one,” said Figueroa. “But I believe I’d also have an advantage boxing him at a distance. So he can say whatever he wants, I don’t think he’s going to want to go toe-to-toe with me. I can guarantee you he’ll regret that.

“I see this as the biggest opportunity of my career, and Vazquez is standing in my way. This is my chance to show everyone why I’m one of the best fighters in the world. I’m ready, I’m focused on September 26, and I can’t wait to showcase my skills.”

The stacked doubleheader lineup includes several top fighters in and around the 122-pound division, including a vacant WBC title fight between Luis Nery and Aaron Alameda, plus former unified champion Danny Roman battling Juan Carlos Payano in a title eliminator.

Also, the winner of a future fight between recently crowned WBO champion Angelo Leo and Stephen Fulton could loom as a possible opponent down the road. No matter who Figueroa may face next, he is in a position to deliver action for boxing fans.

“At this point, I feel like any fight with me against a top 122-pounder is a great fight,” said Figueroa. “I’m willing to mix it up with any of them. I honestly don’t care who wants to fight me; I’ll take any of them to put on a great show for the fans. My team knows that as well. So hopefully, after September 26, we can make a great fight with any of the other top fighters in my division.”

The unprecedented pay-per-view twin bill features six compelling fights in all, five of which are world title fights, on the same night for one price. Part one of the SHOWTIME PPV telecast begins live at a particular time of 7 p.m. ET/4 p.m. PT with the three-fight card topped by unbeaten WBC Champion Jermall Charlo facing top contender Sergiy Derevyanchenko.

Figueroa will defend his title against 122-pound contender Vázquez in the co-featured bout. At the same time, WBO Bantamweight World Champion John Riel Casimero faces off against unbeaten Duke Micah in the pay-per-view opener.

Damien Vazquez promises that his fight against undefeated WBA junior featherweight champion Brandon Figueroa will produce fireworks and be the fight of the night.

“My plan is simple. It isn’t a secret. Like I have been saying, it is going to be a phone booth war if Figueroa is willing to go to war with me. We are going to steal the show and be fight of the night, I guarantee it. No disrespect to the Charlo brothers but if my fight goes how I want it to go, it is guaranteed to be the best fight,” said Vazquez.

As has been the case with most of the sports world since the COVID-19 pandemic started to spread in the United States, this event will be held without fans in attendance.

Many fighters have complained about the lack of energy that a crowd provides, Vazquez couldn’t care less. He said that it is just Figueroa and himself in the ring and that they are in charge of their own destiny once they set their feet in the ring.

“Sh*t, it is even better without fans. Every time I go in a ring with or without a crowd it is just me and him. I am not worried about everybody else. It will just be me and him in there so who cares if there isn’t a crowd?” Vazquez explained.

Vazquez normally fights at 118 pounds but is excited to fight at the 122 pound junior featherweight limit. When asked if he believes he will be stronger at the weight he simply said that no one will know until he steps in the ring and lands his first flush shot.

“I don’t know. I don’t know if he is used to power or not but we are going to find out. That is for sure. This is one fight the fans do not want to miss. Once we go at it we will see if he can handle the power or not,” Vazquez stated.

« Luke Campbell vows to “punish” Ryan Garcia for his trash-talking

Lubin vs. Gausha, Ennis vs Abreu quotes for Saturday on Showtime »