By Jeff Aronow: Andy Ruiz Jr says he’s starting training with coach Eddy Reynoso today, and he’ll be joining team member Canelo Alvarez in getting ready for his next fight in early 2021. The former IBF/WBA/WBO heavyweight champion Ruiz (33-2, 22 KOs) says he’s on a “weight loss journey” and trimming down to get a “six-pack” for his next bout.

In a controversial move, Ruiz Jr changed out trainer Manny Robles following his defeat to Anthony Joshua last year. The action caught Robles by surprise, as Ruiz Jr had admitted that he didn’t put in the effort in training camp the way he should have.

Unfortunately, this isn’t the first time that Ruiz has changed out a coach, and it’s unclear how long Reynoso will last. There’s only so much a trainer can do for a fighter when they fail to work as hard as they should.

Ruiz, 31, says he doesn’t know who his next opponent will be, but his management has several candidates that they’re looking at. Previously, former three-time world title challenger Chris Arreola (38-6-1, 33 KOs) was mentioned as his possible next opponent, but it appears Ruiz’s promoters are now looking at other options.

For Ruiz to be starting training camp now, that indicates that he’ll be fighting in January 2021. That would make it a 12-week camp, which is about right for Andy, given his conditioning requirements.

Ruiz has been positioning training videos and photos of himself on social media in the last few months, and he’s taken off a lot of weight since his loss to Anthony Joshua last December. For that fight, Ruiz weighed in at 283 pounds, and it was too heavy for him to fight as hard as he needed to get the victory.

It’s impressive Ruiz has been able to lose a lot of weight on his own before starting training camp. Right now, Ruiz Jr looks like he’s already been through a full camp and is ready to go.

Also, the weight made it difficult for Ruiz to get to Joshua (23-1, 21 KOs), who stayed on the outside the entire contest, moving around the ring to make things difficult for him.

For Andy’s first fight with Joshua in June of 2019, he weighed 268 pounds and was in better condition to get to him. However, Joshua was willing to mix it up with Ruiz in that fight, and he wasn’t focusing on being evasive like he did in the rematch.

“I’m fighting real soon. I’m starting with Canelo tomorrow. And I’m going to be posting a lot at the gym with Canelo,” said Andy Ruiz Jr on social media. “It’s going to be cool. I’m excited.

“Yeah, I’ve been training a little bit, but now that I’m going to start camp with Eddie [Reynoso] and everybody there, I can’t wait. It’s going to be fun. I’m excited to be part of the Canelo team. I’m going to train hard and focus on what I need to get,” said Ruiz Jr.

Training with Reynoso might workout for Ruiz, but we’re going to have to see. Former Ruiz’s coaches Abel Sanchez and Reynoso, have talked about him not wanting to put in the work at times. There’s a pattern that has been established with Ruiz not already working hard, and it isn’t easy to imagine him changing at age 31.

It helps that Ruiz works alongside superstar Canelo Alvarez and the young fighter Ryan Garcia at the Reynoso gym, but those guys aren’t always going to be there. Unless Ruiz’s training camps overlap with Canelo and King Ryan’s, likely, they won’t be around while he’s training with Reynoso.

It’ll be interesting to see what happens once Ruiz becomes familiar with Reynoso and is comfortable with him. Once people get accustomed to being around somebody, that’s when you see old patterns of behavior show themself.

It’s a honeymoon phase for Ruiz and Reynoso, a period where Andy will likely be on his best behavior. But once that honeymoon period is over, it’s quite likely that Ruiz will slip into his old ways without even being conscious of it.

Ruiz Jr chose to leave Robles to go to Reynoso shows how desperate he is and how he feels he needs to be with a coach that he can’t slack off with. But if Ruiz Jr slacked off hen trained by the well-respected coach Abel Sanchez, then it’s predictable that we’ll eventually see the same thing with Reynoso as his trainer.

Andy Jr has several options for the next fight 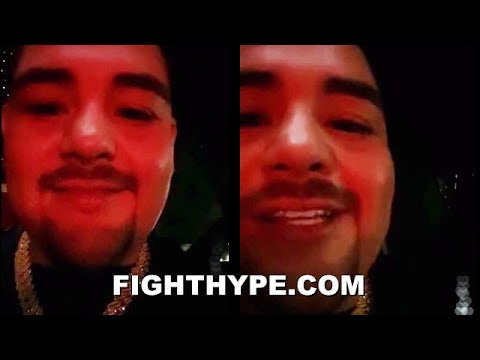 For Ruiz’s next fight, he needs to face bigger heavyweights that are mobile because that’s what he’s going to be dealing with if he gets the third match against Joshua or a title shot at Tyson Fury.

Joseph Parker created the blueprint on how to defeat Ruiz by using movement, and Joshua followed it well on December 7th to beat him in Saudi Arabia. Ruiz’s short legs are going to make it difficult for him to cut off the ring on his opponents, no matter how well-conditioned he is.

Ruiz will need to be smart about taking advantage of when he goes get in punching range for his opponents by throwing combinations. In the rematch with Joshua last December, Ruiz was allowing him to tie him up repeatedly when he would get in close.

f Ruiz Jr didn’t have to let Joshua do that. He could have continued to punch while he was being held, but he let Joshua do that to him. So it won’t matter what kind of physical condition Ruiz gets in for his next fight.

If he’s going to allow his opponents to grab him each time passively, then he’s going to continue to struggle and lose. At this point, Ruiz will be vulnerable against almost any heavyweight in the top ten in the division because they know how to fight him now.

Ruiz’s body is “under construction”

“I’m a different man now. The main thing now is training hard and working on my body. My body is under construction now. So when I get 100% [condition], you best believe I’m going to knock some s*** out,” said Ruiz Jr.

Ruiz needs to get down to the 250s if he wants to be competitive against the big dogs at heavyweight. He needs to do something to deal with smarter fighters who will be looking to keep him bottled up on the outside, and helpless to get his shots off.

It’s unbelievable that Ruiz didn’t take his training seriously for his rematch with Joshua last December, as he had a chance to make a lot of money if he had won that fight. Although Ruiz got a nice payday for the rematch with AJ, the purse split was still slanted in Joshua’s favor due to the rematch clause from the first fight last year.

If Ruiz had beaten Joshua a second time, then he would have been in the position to get a much bigger purse for the trilogy match down the road. It’s unlikely that Joshua would have dared face Ruiz a third consecutive time, but he would have come back later to meet him to try and gain revenge.


« Devin Haney: Gamboa fight is a done deal, I can hurt him