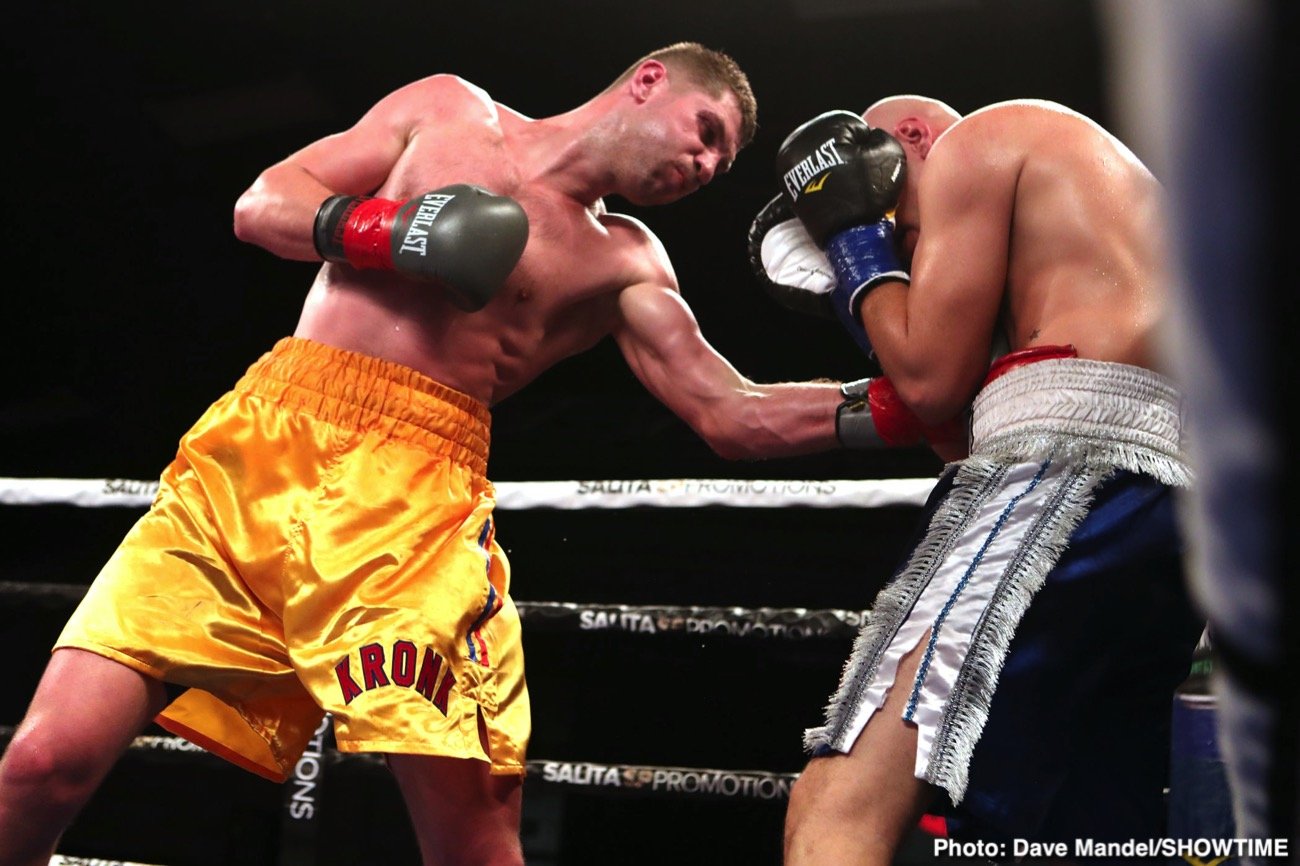 On Thursday, August 20, 2020, promoter Dmitriy Salita will kick off a very special series of no spectator professional boxing shows entitled “DETROIT BRAWL AT THE LEGENDARY KRONK” at Detroit’s Kronk Gym.

“It’s great to kick off this exciting series from the legendary Kronk Gym in the historic boxing city of Detroit and fulfill the hunger of boxing fans and fighters alike who are craving hard-hitting action,” said Dmitriy Salita. “The main event will be a tough test for world-ranked rising star Vladimir Shishkin, and we have several more high-profile fights that we will be announcing shortly. I am thrilled to be able to showcase these fighters to the fight-savvy UFC FIGHT PASS audience.”

Trained by SugarHill Steward at the Kronk Gym, the 28-year-old Shishkin first made his presence felt in his United States debut in August of last year, registering an eighth-round technical knockout against then once-beaten DeAndre Ware.

A former amateur standout in Russia, the 6’ 1” Shishkin scored 301 wins in 330 fights before turning professional in 2016. Despite having just 10 professional fights, Shishkin has already won the WBA Continental Super Middleweight Championship with a KO win over Gasan Gasanov. Shishkin holds a successful title defense against former world title challenger and world-rated contender, Nadjib Mohammedi, via TKO. Shishkin was last seen scoring a dominant unanimous decision over then-undefeated (15-0-2) Californian Ulises Sierra in January of this year.

“It is an honor to be fighting in the first event at the legendary gym where I train and have learned so much about fighting as a professional,” said Vladimir Shishkin. “And with the reach of UFC FIGHT PASS, my fight can be watched by my fans across the USA and back home in Russia. I will work hard to put on a spectacular performance worthy of this recognition.”

A “boxing businessman,” Oscar Riojas is a hard-nosed slugger who always comes to fight, win or lose, regardless of the opponent’s reputation. The 36-year-old veteran says he uses his fight purses to open a café in Mexico and to support his extended family including his parents. Better than his record, Riojas has been on the controversial end of some of his fights against top competition and says he’s ready for war against who he calls the “untested” Shishkin.

“I always come for war, no matter who I face,” said Riojas. “My Russian opponent is undefeated, but he has never been in the trenches with a true warrior. We are going to see if he is what they say he is on August 20. Tell him to be ready.”

Originally run out of the basement of the oldest recreation center of the City of Detroit, the legendary Kronk Gym rose to prominence under the guidance of hall-of-fame trainer, Emanuel Steward, in the 1980s. Producing such homegrown greats including multiple World Champion and Boxing Hall of Famer Thomas “The Hitman” Hearns, lightweight champion Hilmer Kenty, WBC’s World Welterweight Champion Milton McCrory, IBF Lightweight king Jimmy Paul, and WBC Junior Middleweight champ Duane Thomas among many others.

After Steward’s unfortunate death, Kronk Gym relocated to a modern new Detroit facility in 2015, under the guidance of Steward’s nephew, Javan SugarHill Steward. Steward has gone on to forge his own growing legend, working with a new group of fighting champions and contenders, including lineal and unified heavyweight champion Tyson Fury.

“This will be a historic fight because Emanuel was trying to do something just like this before he died,” said Javan SugarHill Steward. “He did amateur shows at the gym but a big pro show like this is something he was working on. To continue his legacy like this is amazing. It’s going to be fire.”

COMMENTARY TEAM NAMED FOR ‘DETROIT BRAWL AT THE LEGENDARY KRONK’

The broadcast team has been named for Salita Promotions’ “DETROIT BRAWL AT THE LEGENDARY KRONK” event at Detroit’s Kronk Gym on Thursday, August 20, 2020, and livestreamed exclusively on UFC FIGHT PASS® (7pm ET/4pm PT).

For more than a decade, Ray Flores has been a play-by-play man and/ or ring announcer for some of the largest mixed martial arts and boxing organizations worldwide including Premier Boxing Champions, TGB Promotions, Mayweather Promotions, Banner Promotions, World Boxing Super Series, Warriors Boxing, Golden Boy Promotions and many more.

In 2017, Ray was the in-arena host for the Mayweather/McGregor world press tour seen all over the world. Over the past several years, Flores has been featured ring announcing on networks such as Fox, NBC, ESPN, CBS, NBCSN, PPV, FS1, MSG, Setanta Sports, SKY Sports, BoxNation, the Active Channel, AXS TV, Galavision, Telefutura, as well as doing play-by-play work on FS1, and Comcast SportsNet Chicago. Ray also spent five years as a sports anchor for ESPN Radio Chicago.

“It will be an honor to call the action from the legendary Kronk Boxing gym in Detroit,” said Flores. “It’s not easy putting on events during this time, but Salita Promotions has put together a terrific card and are taking all the necessary precautions to keep us safe. Expect an entertaining night of boxing from the Motor City on August 20.”

“I’m beyond excited to get back to calling fights after six months,” said Erdman. “Anyone who knows me knows my attachment to the city of Detroit, so it’s a particular honor for me to be broadcasting fights happening at the historic Kronk Gym. I like to think we have some innovative and interesting things in store for the boxing fans at home as we all continue to adapt to a totally new era of broadcasting.”

During his impressive career, two-time former IBF Junior Middleweight Champion Cornelius “K9” Bundrage (36-6, 20 KO’s) has shared the ring with seven former world champions. Bundrage was also a competitor on ESPN’s “The Contender” Season 2 boxing reality television show in 2006 with Hall of fame host Sugar Ray Leonard and Sylvester Stallone and was named “fan favorite” out of sixteen boxers from all over the United States. Outside the ring Detroit native Bundrage is a motivational speaker and mentor.

“This is a very exciting time for the city of Detroit,” said Bundrage, “bringing boxing back to where it all started at the legendary Kronk gym. Emanuel would be proud. I take my hat off to everyone involved in making this fight happen. You can’t imagine how excited I am to be part of this. In the words of Shannon Briggs ‘Let’s Go Champ!’”

Mark Taffet, President of Mark Taffet Media, will be Executive Producer of the telecast and consultant on the event. Taffet brings his extensive boxing event and business experience to the Salita Promotions/UFC Fight Pass effort.

“For the UFC Fight Pass viewers, we intend to provide an entertaining, fast-paced seven fight card which will include talent in two locations and some intense live corner and locker room interviews at the most dramatic moments of a boxing event,” said Taffet.

“I am honored to be working with an all-star cast headlined by one of the long-time leaders of the boxing business in Mark Taffet with some of the world’s best broadcasters,” said event promoter Dmitriy Salita. “Although we are all going through a challenging time, we wanted to give the boxing community a special show from the legendary Kronk Gym in Detroit.”

Opening up the action will be a middleweight four-rounder featuring Detroit’s Marlon Harrington (1-0, 1 KO) looking to spoil the pro debut of San Antonio’s Ricardo Medina.

Thurman to fight in Dec or Jan, Brook a possibility »