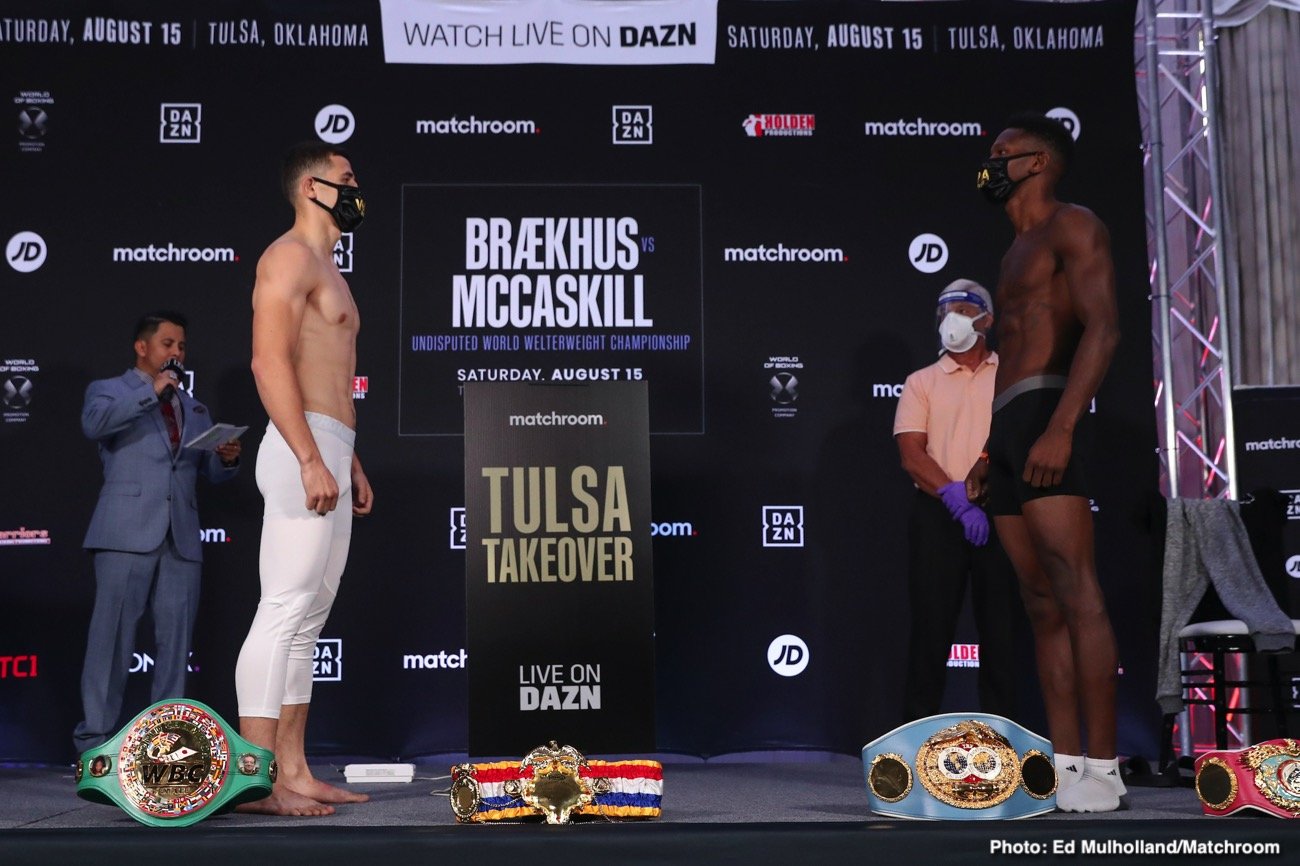 Cecilia Brækhus can become a record-breaker tonight against Jessica McCaskill. The undisputed World Welterweight champion has questioned whether her challenger has the goods to rip the titles from her on the streets of downtown Tulsa, Oklahoma, live on DAZN from 7 pm CT/8 pm ET.

Brækhus (36-0 9 KOs) tackles the unified Super-Lightweight champion McCaskill (8-2 3 KOs). The Norwegian winner holds a significant advantage in experience over her rival, with 36 pro fights, 284 rounds, and 25 World title fights under her belt against McCaskill’s ten rows and 61 shots in the paid ranks, with the Chicagoan entering just her fifth World title contest.

Both fighters know that victory could set up a monster showdown with the winner of next weekend’s rematch between Katie Taylor and Delfine Persoon at Matchroom’s Essex HQ, live on DAZN.

Terri Harper and Natasha Jonas’ thrilling draw in week two in the first-ever World title fight between two Britons and then Rachel Ball edging out Shannon Courtenay over eight breathless rounds last night – and now Brækhus and McCaskill pick up the gauntlet Stateside in a battle that promises fireworks in the street.

“Jessica is hungry, she has fewer fights than me, but she’s younger and ambitions and been in there with some of the best,” said Brækhus. “She’s known for her work tech and grit, so it’s a good challenge for me.

I don’t look at her flaws so much. She’s strong, she has proper technique, she has taken significant leaps in the last years and fights, so she’s a great fighter, but I am just better than her all around.

“We offered a fight to her before, but she didn’t feel that she was ready, which is understandable, but she is now. Maybe this time would make her more prepared for a fight of this size, and it’s a great time, and I’m happy she’s fighting because it’s going to be a great fight. 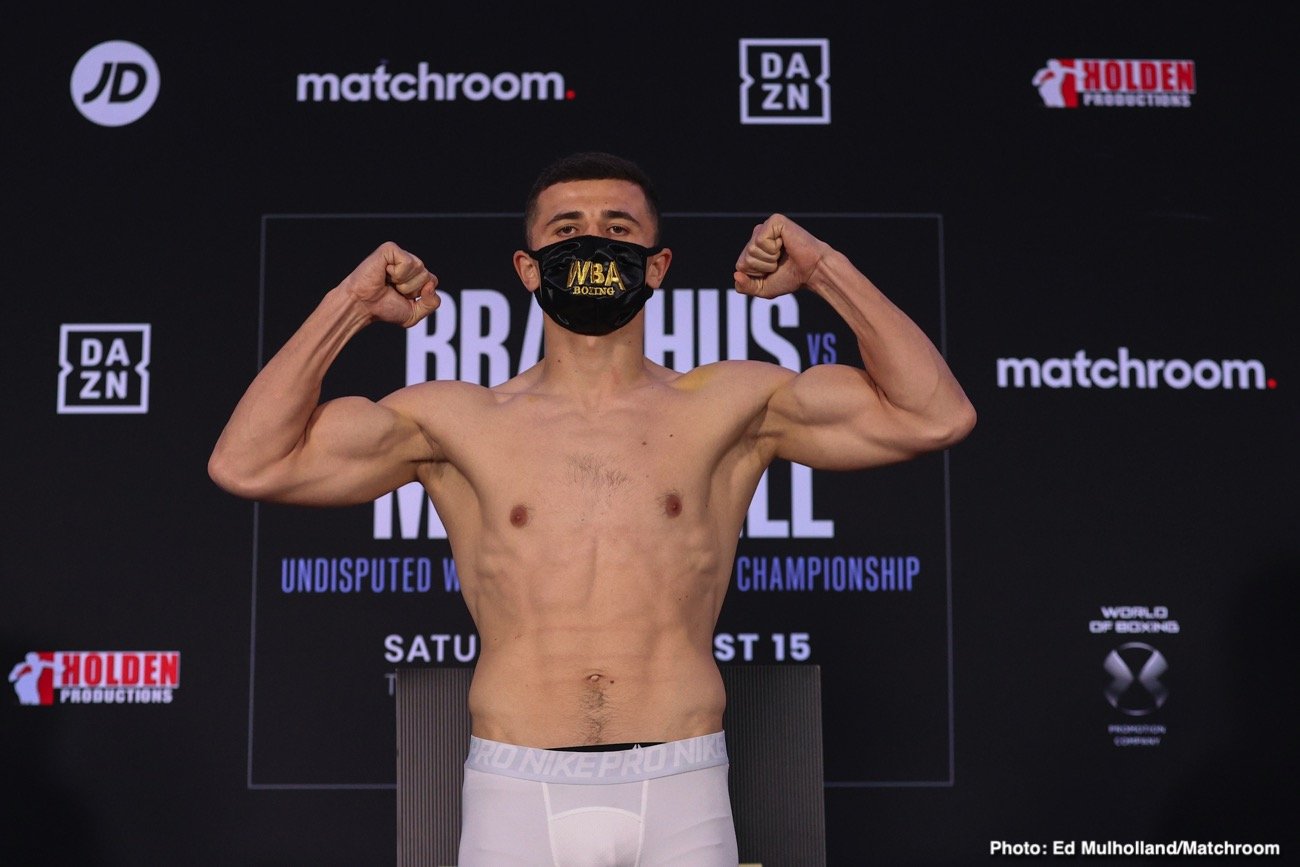 “She’s one of the toughest fighters out there for sure, but I am at the point in my career right now where that’s how I want it, and I wouldn’t want it any other way. If she has what 36 other women didn’t have, let’s see.

“It’s a chance to put my name in the history books, but I am using that as motivation in camp, but I never take anything for granted, and my focus is just the fight in front of me and being the best I can be.

“I like this mini-tournament that we’re in right now, myself, Jessica, Katie, and Delfine. Hopefully, the winners will meet each other; it would be something to elevate women’s boxing and create a lot of hype.

“Challenges like this in Jessica, a Taylor fight in the future, I’ve been fortunate to be a part of this boom in Women’s boxing. We just needed someone to believe in women’s boxing in terms of promoting us, putting their strength behind us in the promotion, 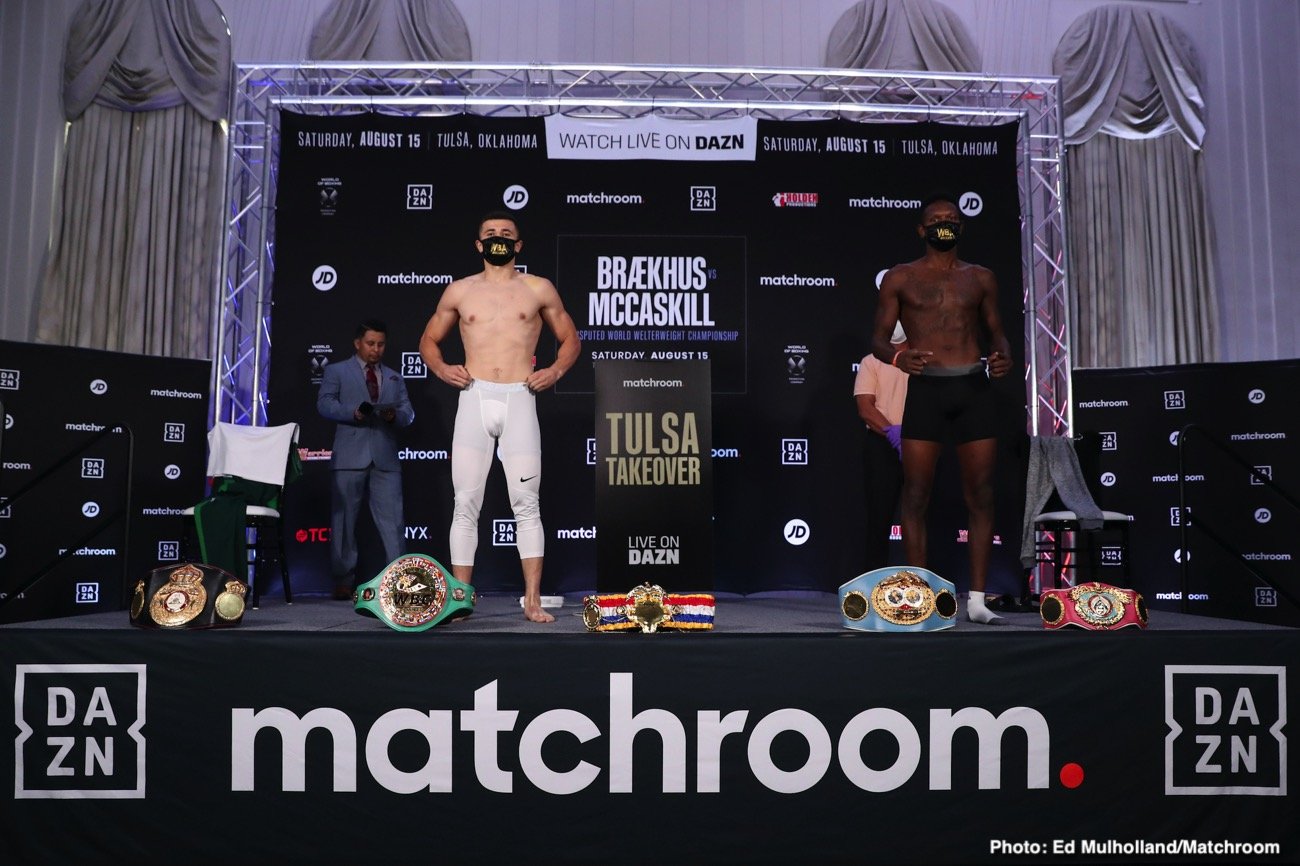 and giving us a platform for us to be shown. We have been waiting for this for hundreds of years. So we are not going to say no to a fight. We are tough because of what you go through as a female in this sport.”

Brækhus-McCaskill tops the bill on a massive night of action in the unique setting of the downtown Tulsa streets as Matchroom return Stateside.

Campos is a second replacement opponent Rey Perez was ruled out following original opponent Francisco Rojo being forced out of the bout after testing positive for COVID-19 during his training camp in his home city and a trio of young talents complete the card in Nikita Ababiy (8-0 6 KOs), Raymond Ford (5-0 2 KOs) and the debut of amateur star Marc Castro.