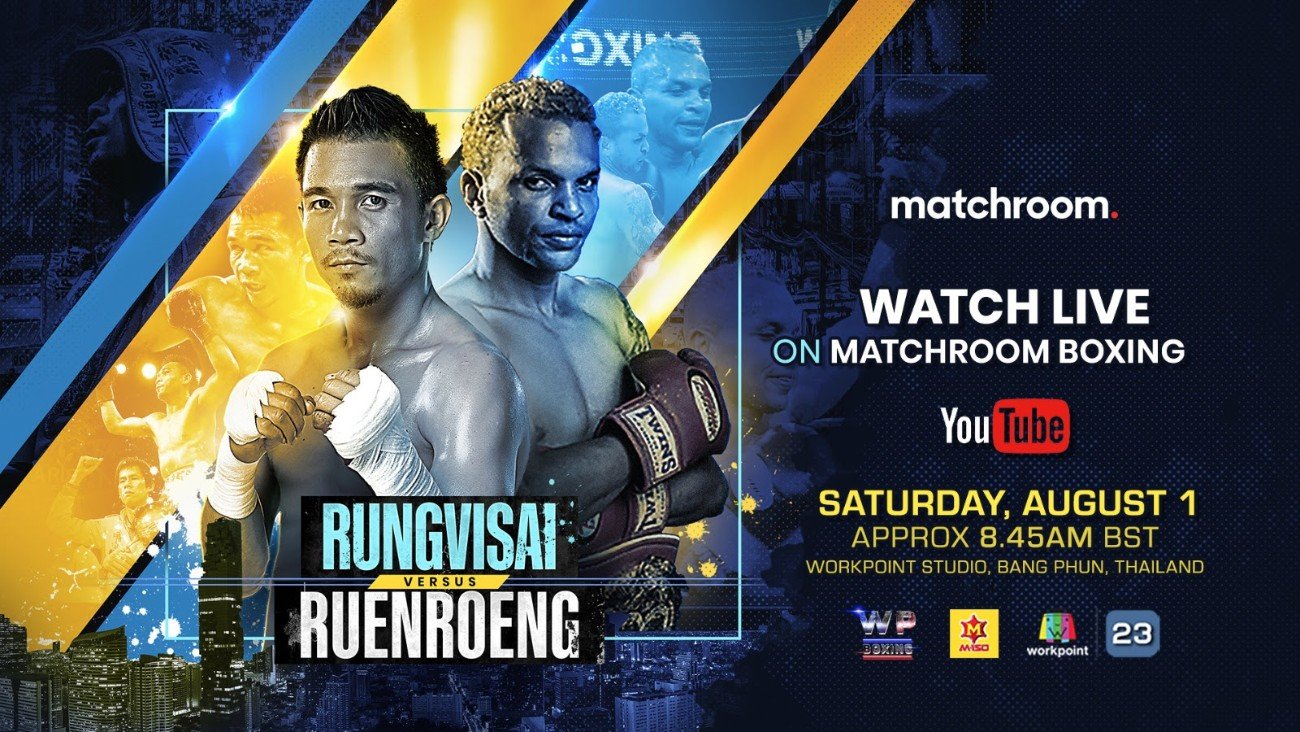 The weight for the fight was 120 lbs, which may account for why both fighters looked so sluggish inside the ring. Ruenroeng was carrying visible fat on his midsection, which is a rarity for a super flyweight, and Rungivisai was nowhere near the form that he’d shown in his matches against Roman ‘Chocolatito’ Gonzalez and Juan Francisco Estrada.

The Rungvisai-Ruenroeng took place behind closed doors in the stood, which may be the reason for such a lackluster performance by the 34-year-old Rungvisai.

“I would like to [return] the WBC (junior bantamweight) title back to Thailand. I would like to say a few words to [Juan Francisco] Estrada. We will meet,” said Rungvisai after tonight’s fight in calling out Estrada for a trilogy match.

In Rungvisai’s last match, he lost to Estrada by a 12 round decision in April 2019. Like tonight, Rungvisai got off to a slow start and enabled Estrada to build what proved to be an insurmountable lead after seven rounds.

Although Rungvisai came storming back in rounds eight through twelve, he came up short in the end on the scorecards.

Sri Saket was supposed to knock out the 40-year-old former IBF 112-pound champion Ruenroeng, but his accuracy was terrible, and his hand-speed glacially slow.

Ruenroeng did an excellent job of taking away Rungvisai’s left hand in the first six rounds by moving to his left always, making him reach to land his powerful lefts.

By the seventh, Ruenroeng began to tire out, and this enabled Rungvisai to land more of his power shots to sweeping the final four rounds.

In the third round, Rungvisai suffered a cut over his left eye from a clash of heads. The wound remained a problem for the remainder of the bout, unfortunately despite the efforts from his cornerman to stop the bleeding.

It wasn’t surprising that Rungvisai was cut because he and the taller 5’4 1/2″ Ruenroeng were frequently banging heads on the inside. Rungvisai looked a lot shorter than Ruenroeng, and the top of his head slamming into the chin of his opponent throughout the fight.

Ruenroeng appeared a lot heavier than 120 pounds after rehydrating. It wouldn’t be surprising if he were at least 135 pounds, and that’s a lot of weight for the 115-pound division.

That might explain why Ruenroeng was able to take Rungvisai’s shots so well, as he wasn’t bothered by them in the way that Chocolatito had been in his two fights against him.

Ruenroeng is a much bigger fighter than Chocolatito, and that extra size helped him absorb the big punches from Rungvisai when he was able to land them on occasion.

In rounds one through four, Rungvisai came forward, looking to land his left-hand shots with full power. What we frequently saw was Rungvisai throwing wild left hands, which would result in him spinning around awkwardly, leaving him vulnerable to the counter punches from Ruenroeng.

Rungvisai looked very uncoordinated when missing with his shots, and he was lucky that Ruenroeng lacked power and hand speed.

A stronger puncher with more speed would have lit Rungvisai up like a Christmas tree each time he missed, and he would have had no chance of winning.

One annoying problem that plagued the fight in the later rounds was Rungvisai’s tape on both gloves was constantly unraveling in the second half of the contest, making it necessary for the referee to stop the action to repair the issue. It’s unclear what kind of tape that Rungvisai’s corner was using because it wouldn’t hold.

With Rungvisai’s loose tape from his gloves, it created a whiplash effect each time he would land a shot to the head of Ruenroeng. The first the punch would land, and then the tape would smack into Ruenroeng’s face.

Loose tape turned into a hazard

You could see his frustration, looking at the referee to let him know that Rungvisai’s tape was loose. Finally, Ruenroeng seemed to resign himself that the free tape was going to be an ongoing problem, so he chose to clinch constantly from rounds eight until ten to keep from getting injured.

All in all, it wasn’t a great fight for Rungvisai, who did look as sharp as he’d been in his loss to Juan Estrada last year in April 2019. Rungvisai didn’t look good in that fight either, but he was far worse tonight against Ruenroeng.

You’ve got to wonder whether age is starting to catch up to the 34-year-old Rungvisai. Yeah, he still has power, but his hand speed and accuracy wasn’t there tonight.

I don’t know that he’ll get it back at this point in his career. He seems to be starting to age rapidly, and he’s nowhere near the fighter that twice beat Roman Gonzalez three years ago in 2017. If you stick Roman in there with Rungvisai tonight, he’d have lost badly to the talented Nicaraguan great.

It sounds like a reasonable idea, but there are better options in the 115-lb division for the Gonzalez-Estrada winner to face rather than Rungvisai. One of these fighters would be an excellent option for Gonzalez or Estrada to fight:

If Chocolatito beats Estrada, then he’ll have to face Rungvisai because of the revenge factor from his two losses to the Thailand fighter in 2017. However, the first of their two fights was a highly controversial 12 round decision win by Rungvisai.

Gonzalez landed a lot of shots and dominated in the second half of the contest after Rungvisai gassed out badly. The judges still gave it to Rungvisai, which created an uproar afterward from boxing fans, saying that Chocolatito had been robbed.

In the rematch six months later, in September 2017, Rungvisai left no doubt who the better fighter was between the two when he stopped Gonzalez in the fourth round.

Moments before the action started for the rematch with Rungvisai, Chocolatito looked mentally detached as he walked into the ring. Some boxing fans think he was crying during the ring walk. He didn’t seem motivated for what he had to have known was going to be another grueling fight for him.

Gonzalez went through a tough time in 2017

Gonzalez looked badly beaten up around the face in his first fight against Rungvisai in March 2017, as well as in his hard-fought 12 round decision victory over Carlos Cuadras in September 2016.

In hindsight, Chocolatito’s management did him no favors by scheduling these three fights consecutively rather than giving some tune-up matches in between to rest and recover.

In that part of Roman’s career, he ran the gauntlet by facing a prime Cuadras and then the hard-hitting Rungvisai for two fights.

Undercard boxing results on the card: