Dubois, 22, dropped Snijders three times in round 1, and then he put him another time in round 2. The fight was halted after Snijders rose to his feet. Referee Marcus McDonnell decided he’d seen enough and stopped the contest at 0:20 of round two.

Snijders seemed to be doing alright in the opening round until the 6’5″ Dubois began dropping him repeatedly. Once Snijders hit the deck for the first time in the round, it was a comedy after that, with Dubois knocking him down often. He would have continued to drop Snijders if not for the round ending.

Dubois landed a hard left to the body that put Snijders down in the 2nd round. It was an excellent body shot, and it’s not surprising that Snijders went down.

The stoppage was very questionable. Snijders made it back to his feet and looked to be in good shape, but the referee Marcus McDonnell looked at him closely and waved it off. It didn’t like the stoppage.

In the first round, you can argue that only the first knockdown should have counted. The other two knockdowns looked like Dubois shoved Snijders and then hit him in the back of the head. Neither of those looked like knockdowns to me, but the referee looked he was struggling in making the right calls. It looked like McDonnell had a stormy night at the office.

Snijders was utterly overmatched, and he was going to lose anyway even if McDonnell did make the right calls.

“I need to step up now,” said Dubois after the fight. “Yeah, I saw that he was pulling back from the head [shots], so I thought, ‘The body doesn’t move, so go for there.’ The target was there, so I just took it, and I came away with the victory and a good stoppage.

“It was just a little warm-up. I’m just getting started,” Dubois continued when asked if he’s getting the cobwebs off from a long layoff from the lockdown in boxing. “There are plenty more to come.

“He’s got to say something like that,” said Dubois when told that Joe Joyce said he would have knocked out Snijders in the first round. “I knew it was a foregone conclusion I was going to win. It was just about getting the ball rolling again, and getting in there and getting under the bright lights after all the training camp and getting the victory. If I have Joe next, I’ll be more than ready for him.

“Whenever they bring him [Joe Joyce] up, I’ll be 100% sure that it’ll be a great fight that I’ll win, and I’m excited about that. It’s always good to see the big names at ringside, even though there’s no crowd there like I would have liked. It was good to see the top guys in the business, David Haye included.

“I didn’t even want to send a message to Joe. This is between him and me. It’s personnel,” Dubois continued. “We’ll get it on when we get it on, and we’ll know what’s up. This was about me getting back under the lights and doing what I do best,” said Dubois.

Daniel is now ready to take on Joe Joyce in a mouthwatering fight in October. That’s the match that all boxing has been waiting for, and fingers crossed, it happens without something getting in the way. 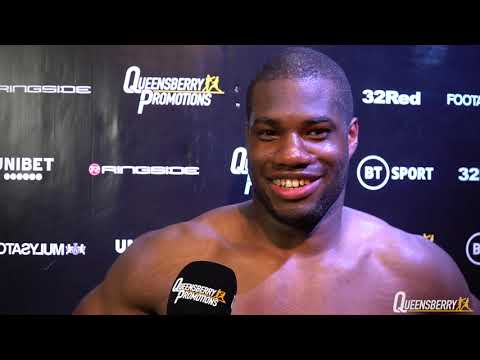 Now with the mismatch against Snijders out of the way, Dubois will face the 2016 Olympic super heavyweight silver medalist Joe Joyce on October 24 at the O2 Arena in London. That’s the fight that boxing fans have been waiting for, and it’ll tell us whether Dubois is the real deal. We already know that the 34-year-old Joyce is a solid heavyweight, but we don’t know if Dubois has the goods to hang with the top 10 heavyweights.

Boxing News 24 had it 115-112 for Edwards. He did an excellent job of out-boxing the limited Essomba, but he was far from impressive.  Edwards’ lack of power made the fight more difficult than it should have been.