Zepeda vs. Castaneda & Takam vs. Forrest on week 5 of ESPN summer series 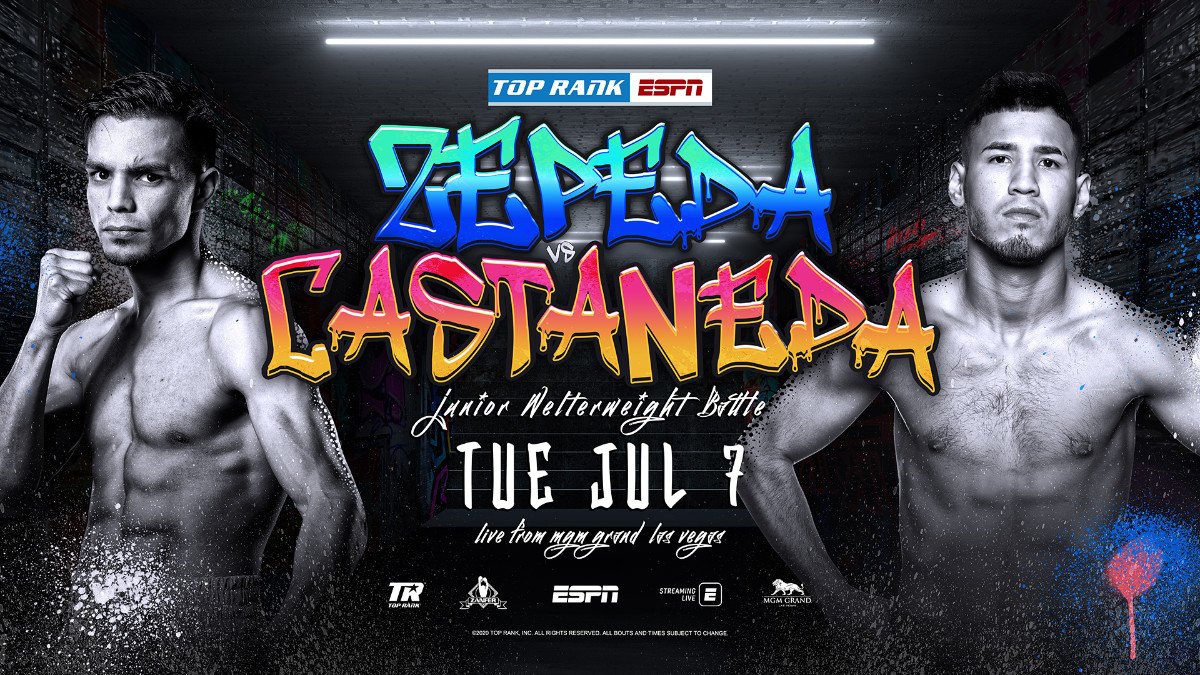 A southpaw stylist weighing 140 pounds and a 250-plus-pound heavyweight will enter “The Bubble” spotlight at MGM Grand for Week 5 of Top Rank on ESPN’s Summer Series.

Both shows will air live on ESPN and ESPN Deportes beginning at 8 p.m. ET/5 p.m. PT.

“In the main events, you have four fighters hoping to seize an amazing opportunity live on ESPN,” said Top Rank chairman Bob Arum. “Jose Zepeda is one of the world’s elite 140-pounders, and I credit Kendo for taking on this challenge. I believe Carlos Takam can climb the heavyweight rankings again, and most importantly, he is a fan-friendly fighter who is guaranteed entertainment.”

Zepeda is a little more than a year removed from challenging junior welterweight world champion Jose Ramirez in Ramirez’s backyard of Fresno, California. He fell short via majority decision, but many experts believed he’d done enough to win the title.

Castaneda, from San Antonio, stepped in after Zepeda’s original opponent, Ivan Baranchyk, suffered an injury in training. Castaneda hopes to rebound from his first career loss, a majority decision to fellow unbeaten Yomar Alamo in February.

“I’m ready to fight on July 7, whether it’s Ivan Baranchyk, or any of the other fighters in the 140-pound division,” Zepeda said. “I’ve trained for July 7 since early May, so no matter who’s in the opposite corner, I’ll be ready.

I’m a professional. I’m coming to MGM Grand ready to prove, once again, why I’m one of the elite junior welterweights.”

Vences makes his 2020 debut with intentions to carry over the momentum from his final outing of 2019, a unanimous decision over Mark Bernaldez. The San Jose native recently called out WBO world champion Jamel Herring, and he hopes a win over Lopez will push him closer to a world title shot. Lopez, from Mexicali, Mexico, has won three straight since a decision loss to unbeaten contender Ruben Villa.

“I’m very excited to return to the ring against the tough, rugged Luis Alberto Lopez,” Vences said. “I want to fight the best and prove to the boxing world that I am one of the best in the junior lightweight division.

I’m grateful to have Top Rank and my manager, Peter Kahn, behind me 100 percent. My hard work, discipline, consistency, and sacrifices will pay off.”

In an eight-round lightweight bout, the Las Vegas-born Andres “Savage” Cortes (12-0, 7 KOs) will return from a yearlong layoff to face Alejandro Salinas (10-3, 9 KOs). Cortes, who holds a pair of amateur wins over current lightweight world Teofimo Lopez, is 9-0 with 5 KOs when fighting in Las Vegas.

In a four-round lightweight bout, the undefeated Eric Puente (2-0) will take on Diego Elizondo (2-1-2), who is coming off his first career defeat last October on the Shakur Stevenson-Joet Gonzalez undercard.

Gabriel Muratalla (3-0, 3 KOs), the fighting preschool teacher who scored a first-round knockout in “The Bubble” on June 11, returns on short notice to fight Sergio Lopez (4-5-3, 0 KOs) in a four-rounder at bantamweight. The Robert Garcia-trained Muratalla knocked out Fernando Robles in 2:33 live on ESPN, earning him another televised slot.

NEWS:   Francesco Patera vs. Devis Boschiero on DAZN on Dec 17

Takam has been at, or near, the top of the heavyweight hierarchy for the past decade. He is a former world title challenger who has won three fights in a row and is seeking another championship opportunity at the age of 39.

A 2004 Olympian for his native Cameroon, Takam, who is co-promoted by Joe DeGuardia’s Star Boxing, has wins over former world title challengers Michael Grant and Tony Thompson.

Forrest has suffered only one defeat since 2014, a controversial split decision against Jermaine Franklin last July. The winner of this main event will take a seismic step forward in the heavyweight landscape.

“For the past two weeks, I didn’t think I was fighting since my fight with Oscar Rivas fell through, but I stayed ready,” Takam said. “I want to give a great fight to everyone watching on ESPN.”

DeGuardia stated, “I am thrilled the ESPN audience will be able to see Carlos Takam on July 9. Takam-Forrest is a significant fight in a hot heavyweight division. Carlos is a true pro, and he didn’t let the Oscar Rivas pull-out affect him. He stayed ready and now can jump in on less than two weeks’ notice to capitalize on this opportunity. This will be his third fight in less than a year, and kudos to him as he is a fighter who wants to stay active.”

“I respect Carlos Takam as a man, but I will have to hurt him and do what I have to do to win,” Forrest said. “This is an amazing opportunity for me to fight on ESPN. I feel I’ve earned it, and I’m more than ready. The change in opponent was of no huge concern. Though Takam has been more active and is in better shape, he and Jarrell Miller have a similar style, so I didn’t have to change much in training camp.”

Castro, from Phoenix, Arizona, is 5-0 since signing a co-promotional deal with Top Rank, rising the rankings with a classic boxer-puncher style. He dominated former world title challenger Genesis Servania over 10 rounds in February 2019 and is coming off a tight majority decision verdict over longtime contender Jesus Ruiz.

Juarez is synonymous with toe-to-toe battles and is perhaps best known for his 2015 Fight of the Year contender against Nonito Donaire, which he lost by unanimous decision. Juarez is 8-4 since the Donaire fight, including a knockout win over Albert Pagara (26-0 at the time).

Heavyweight sensation Jared “The Real Big Baby” Anderson (4-0, 4 KOs), who notched a KO win inside “The Bubble” on June 9, will return in a six-rounder against an opponent to be named.

In a four-rounder at welterweight, Peter Cortez (2-1, 1 KO) will take on an opponent to be named.